It took only half a season for Jake Arrieta to transform from relatively insignificant transaction jetsam to legitimate major-league ace; it hasn’t taken too much longer for him to transform into something confusingly between the two. Last year was full of performances that provoked “what’s wrong with Jake Arrieta?” and this year has brought only more of the same so far—though, at this point, those performances are not so much baffling as they are simply a new normal.

Yesterday at Coors Field, however, was the worst of them all. Arrieta’s outing against the Rockies was among the worst of his career overall and unquestionably his worst in several years. It started out fine—a 1-2-3 first inning, a second with a walk and a single but no serious damage. Then things got worse, and then they got much worse.

That’s just a sampling of Arrieta’s third inning, but it should be enough to get the gist of it. He only managed to record three outs by striking out Rockies pitcher Antonio Senzatela twice, once to start the inning and once to end it, with a fielder’s choice in the middle. Between all that were six runs courtesy of four singles, a double, a triple, a walk, and one unfortunate throwing error by Javier Baez. He was given a chance at the fourth inning, but two runs and two outs later, he was done.

Of course, if you’re going to get rocked, there’s no place for it like Coors Field—but Arrieta’s nine-run, three-innings-and-change day came with zero home runs, despite the fact that dingers have been one of his biggest problem areas this year with a HR/9 more than double last season’s rate at 1.5. But the other issues that have plagued Arrieta so far this season—the sudden dive in ground-ball rate down to Baltimore-Arrieta levels, the poor command—were on full display yesterday, and the Cubs couldn’t overcome it. 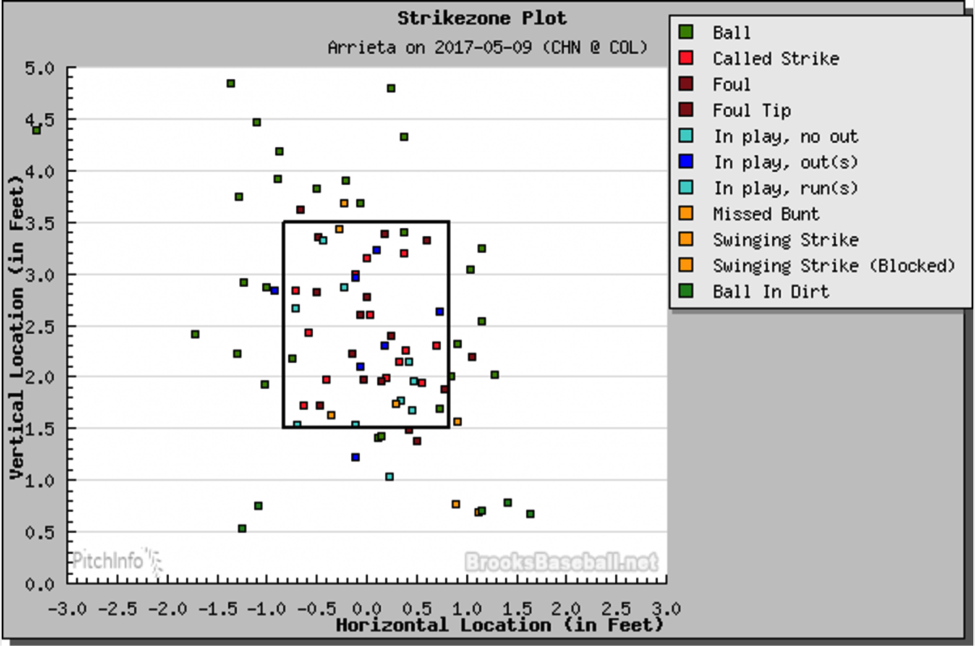 Chicago ultimately fell to Colorado 10-4, though they made good on their chance to get even in the next game of the double-header with an 8-1 win.

Julio Urias held the Pirates hitless through the sixth inning, late enough to bring the customary broadcast euphemisms and a wave of hypothetical questions on just how long manager Dave Roberts would be willing to let him go. The Dodgers have kept a close watch on 20-year-old's innings, and Roberts has shown before that he doesn’t have any sentimental attachment to the concept of a no-hitter that could override any potential qualms about pitcher health or usage. (See: pulling Ross Stripling after seven no-hit innings last spring, pulling Rich Hill after seven perfect innings last fall.)

But Andrew McCutchen rendered all those questions irrelevant by leading off the seventh inning with a double, and Urias was pulled a batter later. While he didn’t get particularly close to his no-hitter, he did get a meaningful first—the first time he extended a start into the seventh inning in a major-league uniform. But the bullpen wasn’t so effective in his stead, and the Dodgers saw their 2-0 lead turn into a 3-2 deficit by the eighth.

The team recovered that in dramatic fashion, though—after tying the game on the three straight singles in the bottom of the ninth, they scored the winning run in the 10th thanks to pinch-runner Ross Stripling, in to replace Yasmani Grandal on the basepaths and able to motor home from first on an Austin Barnes double.

Also needing extra innings were the Orioles and Nationals. Ubaldo Jimenez rose to the occasion with one of his better starts in recent memory to make something of a pitchers’ duel with Max Scherzer for most of the game. (Not a particularly even pitchers’ duel in regards to dominance, with Scherzer striking out 11 while Jimenez recorded scarcely half that, but a pitchers’ duel nonetheless with both starters limiting the opposition to one run through seven innings.)

Jimenez finally began to falter in the eighth inning, giving up a three-run homer to pinch-hitter Adam Lind before being pulled. Baltimore managed to jump on Washington’s bullpen to even things up in the bottom of the ninth, and they stuck around to win it on a Mark Trumbo RBI single in the 12th. That’s their sixth consecutive win, enough to secure the Orioles the best record in baseball.

The Cardinals dug themselves into a four-run hole in the sixth inning against the Marlins— choosing to intentionally walk Giancarlo Stanton in order to load the bases, only to see them all clear after a Derek Dietrich double and a Justin Bour single. But St. Louis came back with a four-run inning of their own before the night was out, jumping on Miami’s Kyle Barraclough in the eighth in order to tie the game. Dexter Fowler came through as a pinch-hitter in the ninth to drive in the go-ahead run on a single to cinch the fifth win in a row for the Cardinals.

The Orioles had a chance to end things a little earlier than they ultimately did. In the 11th inning, J.J. Hardy tried to score the winning run from second on a single—but Bryce Harper and his arm had other plans.

What to Watch for Wednesday

Last week, Yonder Alonso jumped on baseball’s collective radar by hitting five home runs. Last night, he hit two more. The A’s first baseman has looked like a different hitter, with a fly-ball rate of more than 50 percent that’s allowed him to go dinger-crazy. He’ll look to continue the trend tonight against Jesse Chavez and the Angels (3:35 ET).

The Mets have three starting pitchers on the disabled list, one in some sort of disciplinary or personal crisis, and, uh … Robert Gsellman. That means that Rafael Montero will be making his second start of the year tonight, after being converted from the bullpen last week due to the short-handedness. His first start saw him pulled in the fourth after struggling with all of his usual problems—poor command, unable to throw strikes—so he’ll try for something a little better tonight. He takes on Matt Cain and the Giants (1:10 ET).

You need to be logged in to comment. Login or Subscribe
jsdspud
Other than watching my team win, the thing that pleases me the most in baseball is watching Jake Arrieta walk off the mound mid-inning after getting lit up.
Reply to jsdspud
heterodude
As Mariners pitchers drop like flies, I personally would like to see Max Povse get one of those rotation spots for the time being.
Reply to heterodude