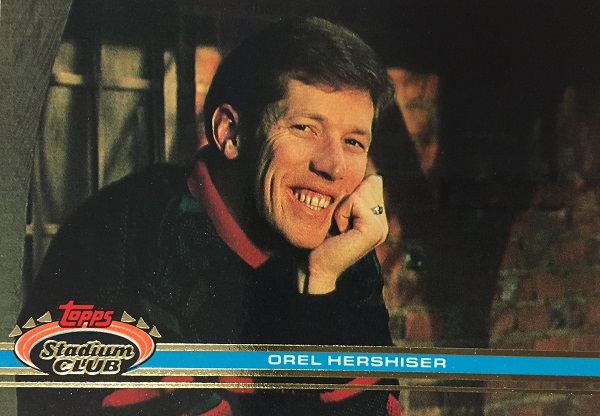 You know, the world is a busy place. There’s always something to do, somewhere to be, so much to take in. Kendall Graveman turned an unassisted double play last night! The Mariners and Braves both won baseball games! The Mets will never win again! We understand your desire to consume this important, relevant content.

We bring you: Orel Hershiser Day.

Please, as you read the following articles, open this video in another tab, set it on repeat, and let the gentleness of Orel Hershiser’s hair take you on a journey.

Though photography was not brought to the forefront of modern society until the 2005 hit song, “Photograph” by pop-rock legend Nickleback, it has in fact existed since the early 1800s. In its most primitive form, photography took upwards of 20 minutes to produce one photograph, enabling the dread of consumption to overtake its subjects, producing universally somber expressions. As the technology progressed and vaccines became the norm, photographs began to show more of the human soul; they captured various expressions of hope and anguish, laughter and tears. People used photography to piece together their story, documenting birthdays and special occasions as well as the mundane.

This role is partially occupied in baseball by annual baseball cards depicting each player as well as various special occasions, like the All-Star Game. Rather than pore through pages of statistics or history books in dilapidated public libraries, an examination of these cards serves to provide a robust account of the career of one Orel Leonard Hershiser IV.

In 1986, Hershiser, but a young pup, was in his third major-league season. He assumes a confident stance, staring head-on at the camera, saying, “whatever you’ve got for me, baseball, I can take it.” His slight, playful grin echoes this attitude, but is just earnest and toothy enough to avoid being cocky. The twilight backdrop and presence of the glove confirm this. He is still at the bottom of the daylight seniority list, and he cannot be identified independently of his position. He knows he’s relatively new to the game and has to earn respect and notoriety.

By 1989, Hershiser had established himself as one of the best pitchers in baseball, capturing the Cy Young Award in 1988 and making three consecutive All-Star rosters. In the prime of his career, he is unconcerned with the camera; he exists independently of it, and instead spends this time envisioning his next conquest. He’s made it. There’s no glove. Everyone knows his name and his position, now they need to memorize his face.

With the weight of the impending strike weighing down on him, in 1994 Hershiser decided to try his hand at other careers. Like with pitching, he gives it his full concentration. The previous 8 years of squinting toward the camera and his own, bright future, have taken their toll. The bespectacled Hershiser has decided to ignore the camera, instead focusing on the task at hand. No longer exists the luxury of ruminating on the days behind or ahead. Now, there is only sod.

In 2000, at the end of his career, Hershiser pays homage to its beginning. Like in 1986, he stares at the camera head-on. But rather than a smirk, his slight smile is more wistful in nature, conjuring up memories of his debut while thinking about the opportunities available in his future. He assumes the stance of a pitcher one final time, bringing his career full-circle. Though it’s hard to say it, it’s time to say it: goodbye.

Orel Hershiser comes from a proud tradition of Orel Hershisers, and why wouldn’t they. His full name is Orel Leonard Hershiser IV, because even in the 50s you didn’t see a lot of Orels, and even today you don’t. Even Google isn’t familiar with the name: 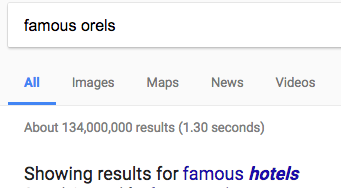 Passing that on, his eldest son is Orel Leonard Hershiser V, or “Quinton,” because sometimes you just need to wordplay your way into the family tree. It doesn’t explain why the Dodgers pitcher was not known as “Fourel Hershiser,” but it does explain why his dad stylized his name as Or3l.

Here is the projected depth chart of Orels Hershiser:

A Record in Waiting

Baseball fans are conditioned to appreciate and to lust for roundness, for symmetry. Sometimes the urge grips us so that we even ignore context and more impressive feats, all for the praise of the .300 hitter or the 40/40 player or 500 home runs. We fetishize the cycle, despite its evident inferiority to the three-homer game or eight shutout innings pitched. Base-ten usurps the four bases we have set in the diamond, and we remember Clemente’s exactly 3000 hits instead of his .317 career average.

When a symmetrical number or pleasantly serendipitous calendar date complements a feat of objective excellence, the stars align for a moment. Within that constellation exists Orel Hershiser’s 59 scoreless innings streak: a brutally difficult achievement, precisely bookending the 1988 Dodgers season.

That year, Hershiser completed his last nine starts. The final six were shutouts. In his last start, on September 28, he blanked the Padres for nine innings, but the Dodgers failed to score a run. Hershiser reportedly asked manager Tommy Lasorda to come out of the game, but, by persuasion or epiphany, he strutted out for the tenth and completed the inning, scoreless, to capture the record from Don Drysdale.

In one of his essays, Russian literary theorist Mikhail Bakhtin posited that the structuring of space-time differed across genre and artform; he dubbed that configuration the “chronotope.” We’re used to the formal restrictions of the baseball game and the baseball season, as they’re so precisely delineated by threes and nines and 162.

Hershiser managed to distort time and space with his record chase, though, as the best and most alluring players do. We have the end of the Dodgers season, and we have the endpoint to the record chase, one inning beyond that which would normally be allotted. The Dodgers were ticketed for the playoffs, but the record would pause for the offseason as soon as Hershiser exited the game that night versus San Diego. It would drift ethereally for six full months, October through March, before visiting upon us again. Such Gregorian congruity is rare.

The arc of that night—Dodger Stadium thick with chronotropic elasticity—bent to Hershiser’s exploits. He returned for the tenth. With a lazy Keith Moreland fly to right and a prolonged crouch on the mound, as if the weight of the moment was too much, he entered the record books. Six long months would his streak survive.

In the first inning of the second game of the 1989 season, Hershiser surrendered a run to the Cincinnati Reds. Baseball marched on, to its rigid snare snapping on the threes and nines, and the stretched time of Hershiser’s record ceased.

You need to be logged in to comment. Login or Subscribe
Junts1
I was 7 years old in 1988. I didn't follow the baseball season, but I did play tee ball. That October, I happened to walk past a TV that was playing a baseball game, and I stopped and watched.

Orel Hershiser didn't pitch in that game, but it did end in one of the greatest moments in baseball history - Kirk Gibson. Needless to say I became a baseball fan and a Dodger fan on the spot, and I was a pretty obsessive kid, so I spent the whole off season reading about the prior season, and Hershiser became my favorite player almost immediately, especially after I became a pitcher in little league the next year.

In the days before purchasable replica jerseys, my mother handmade a 55 Dodgers home jersey for a Halloween costume.

It was hard to be a fan of a team that wasn't local to you back then, especially as a kid. We lived in Montana, so it wasn't like I could watch Dodger games on KTLA. The best we could do was the awful Braves on TBS (which turned my mom into a Braves fan just in time for 1990 to happen: she might have profited more than me from this).

Fortunately, Great Falls, Montana, was the Dodger Rookie league team until 1995, so we got to go see our own Dodgers. We had gone to one game in 1988 just for fun, and seen Jose Offerman and Eric Karros, which somehow I still remember, and we went to every home game in 1990, watching a team that featured Raul Mondesi and Pedro Martinez.

Now I watch every Dodger night game on mlb.tv and hear Hershiser, along with Joe Davis, attempt the herculean task of succeeding Vin Scully. They do a credible job at an impossible task, and Joe clearly reads Fangraphs and BP.

This story doesn't mean anything, but I think it's a great illustration of how baseball and the people who play it follow you your entire life. Hershiser was a huge part of the genesis of my baseball fandom, and 29 years later, I'm still occasionally impressed watching games when he exactly predicts and explains the pitch sequence a pitcher will probably use against a hitter.
Reply to Junts1
jfranco77
Oh, you kids today. Photography was brought to the forefront of modern society by Def Leppard in 1983.
Reply to jfranco77
clete6
Actually, it was Ringo Starr in 1973.
Reply to clete6
bhalpern
Paul Simon beat that by six months.
Reply to bhalpern