Mel Ott, King of the Bunt?

Though I’ve never actually eaten Wheaties, I imagine they’re perfect for staving off the hunger of active kids until lunchtime. I’ve always been a fan of the athletes-on-Wheaties-boxes tradition. I own 2004 Red Sox, 2007 Red Sox, and 2008 Kevin Garnett boxes, all of which still contain Wheaties, and which I believe will get me through the impending apocalypse. I think Wheaties has done admirable things in promoting a diverse range of athletes in recent years. Until today, I had no ill will toward Wheaties, General Mills, or its subsidiaries.

And then I stumbled upon the above monstrosity. 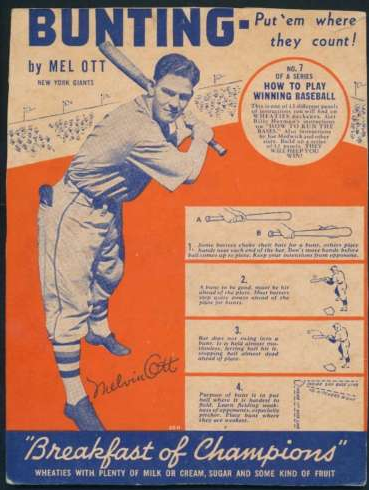 That’s right. In 1937, Wheaties thought it would be a brilliant idea to make Mel Ott the face of bunting. That’s 1932, 1934, and 1936 home run leader Mel Ott. The man who reached base almost half the time. The perfect candidate to detail how bunting is “playing winning baseball.”

I’ve wracked my brain trying to rationalize this horror, and the way I see it, there are five possible explanations:

I don’t know about you, but I’m not prepared to give either Yost or a cereal box that much power, so I’m ruling out options 3-5. Of the remaining two, the second one seems most obviously correct.

(Feel free to send me gift baskets for saving you all from spending hours puzzling over this blight on humanity.)

Seven NRI Pitchers Who Were Cut From The Rays This Week

Want to make the big leagues? You have to put in the work here. pic.twitter.com/yo1sHt9RJQ

Some brief notes on actual pitchers who were in the Rays spring training and were ultimately cut in this, the final week of spring training please do not look them up elsewhere:

Nolan Strothmo: 6’2” Vanderbilt product, spent the offseason as a high-end taffy appraiser… Said the process really opened his eyes… Coaches liked his makeup but could not get past how wide his eyes were.

Zack Wakefield: Got into camp because he said his dad was Tim Wakefield, which it is, but not that one… Had a decent changeup all throughout spring, but ultimately faded down the stretch as he started throwing too many parsnips whittled as baseballs… Opposing hitters picked up on the scent.

Alex Mendoza: Sported a modest 7.2 K/9 throughout spring training… Kept referring to each opposing batter as “my roommate,” which was an effective distraction at first but after a while just became annoying.

Caleb Garamond: Actually made the team, but requested a release as he was just looking for a few weeks of “alone time” on the mound… Refused to shake anyone’s hand, and never changed out of his uniform… Left the stadium and walked westward, toward the sea.

Yanri Koleta: Groundball specialist signed from the independent leagues who somehow did not get a batter to hit into a single ground ball in 5 2/3 innings of work… Claimed it was because “you guys hold your baseballs upside down here in the big leagues.”

Olivier Dufour: Very uplifting story… The Quebecois sinkerballer was seeing his first time in a big league camp in seven years… He had spent the last six years waiting in a dentist’s office… He had also never heard of chewing gum, which would have been a major league first… 80% of dentists correlated these two facts… Ultimately couldn’t locate any of his pitches.

Rickie Weeks, Jr.: Was standing in the wrong line… Actually arrived in camp to apply for position as Team Crier, a vocation he invented… After the fact, too nice to speak up… Made the team as an infielder, to avoid embarrassment.

The Writing’s on the Ball

My 28th birthday fell on a Monday. I was excited that morning: Birthdays in the office meant long, somewhat boozy lunches, small bouquets of flowers adorning your desk for an entire day, and assorted presents from co-workers. I was also still at the point in my life when birthdays were actually fun, and not yet a depressing reminder of my fleeting youth: a score, rather than a timer. I also was living in Staten Island, so my commute consisted of a bus ride, a ferry to Manhattan and then a subway to midtown. I had a long time to get excited thinking about what I was going to walk into at work.

The elevator doors opened on a colorful bouquet of gerbera daisies and a medium-sized ‘Happy Birthday’ bag in front of my computer monitor. I reached into the red, green and blue ‘Happy Birthday’ bag first. I figured with a bag that size, the present could be a clutch or a wallet. I opened the card and it said, “I know he’s not your favorite but I thought this would be cool.” Bemused and intrigued by the message, I reached in further and pulled out a box.I opened it, took out the baseball inside and stared at it. It was signed by, as far as I could tell, someone.So I logged into my computer, immediately went to yankees.com and looked at the current roster. I thought it would help but as I scrolled through the names, I remained puzzled. Then I thought that my account manager, who was a Mets fan, could have gotten me a signed ball with a Mets’ player’s signature on it. So I went to mets.com and did the same thing. I scrolled through the names, but no luck.

I thought to myself, “Why was this so hard?” And then I thought, “And why can’t these [bleepin’] guys have legible signatures?”

Finally, after about 10 minutes of wracking my brain, trying to figure out whose signature was on the damn ball, my account manager Tom peeked his head around the side of my cubicle and said, “So, what do you think?”

Exasperated, I looked at him and asked, “Who the hell’s signature is this?”

He laughed and said, “Roger Clemens!” as if it were so easy to read.

I looked at the ball and yelled at him, “I couldn’t tell whose name it was!” I explained my attempts at deduction, and he laughed at me.

He said, “Stace, even I know not to get you anything Mets related.”

I displayed the ball in its case on my desk for a few weeks and then brought it home. And, just for the record, everyone else in the office had as much trouble figuring out whose signature it was as I did.

After Clemens got his 300th win the following season, I joked about selling the ball, but I ended up keeping it. And nearly fifteen years later, I still have in my possession, a signed ball by Roger Clemens and it still doesn’t look he’s the one who signed it. 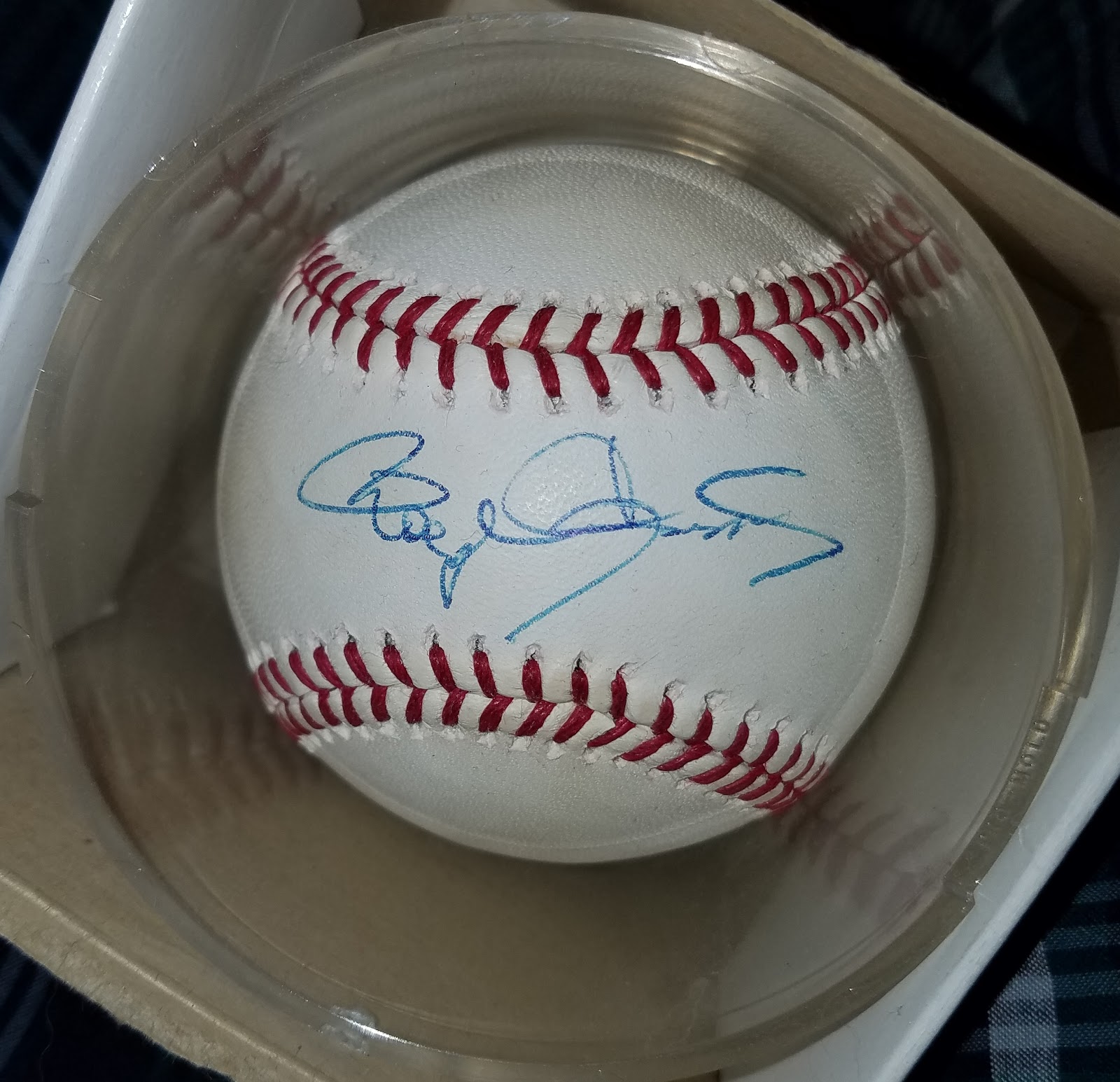 My comment was - "waits for the first joke about the signed Clemens ball."
Reply to jhardman
BrewersTT
Terrific humor, thanks for that.

Would have sworn that the ball was signed by Beagle Glarnis, who is probably another of the Rays spring washouts.
Reply to BrewersTT
stacegots
I still show the ball to people when they come to my house and most of them can't figure it out.
Reply to stacegots