Between now and Opening Day, we’ll be previewing each team with a focus on answering the question: “How will this team be remembered?” For the full archive of each 2017 team preview, click here.

Baseball, more than the other major North American sports, is obsessed with market size. We celebrated the success of the small-market Indians last season, as we did the small-market Royals and Rays before them—Davids taking on the Goliaths in New York, Los Angeles, and Chicago. There was a bestseller written about Oakland’s ability to rise above its small market. Market size doesn’t really enter the conversation with other sports. Nobody talks about the Green Bay Packers, Cleveland Cavaliers, or Pittsburgh Penguins cheekily defying their markets. 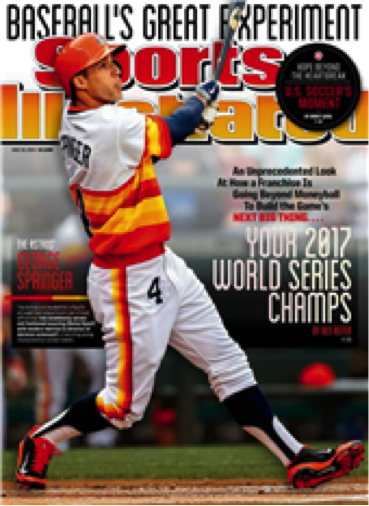 And our sense of small and large markets is off-kilter. I’m going to look at Metropolitan Statistical Area (MSAs), which include not only cities themselves but also the contiguous areas with which they are connected. Boston is only the 23rd-largest city in the U.S. but it’s the 10th-largest MSA, since it draws from all over New England, and nobody would think of Boston as a smaller market than, say, San Antonio (seventh-largest city).

New York and Los Angeles are large markets, to be sure. But we consider Tampa Bay (18th-largest MSA in 2015) to be a small-market team, while divisional rival Baltimore (21s-largest) is a large-market player. We think of the Tigers as the behemoths of the AL Central, even thought the White Sox obviously play in a much larger market and Detroit (14th-largest MSA) is a struggling city that ranks barely ahead of more prosperous Minneapolis-St. Paul (16th) in terms of population.

And while Milwaukee, Cincinnati, and Pittsburgh play in MLB’s smallest, fourth-smallest, and fifth-smallest markets, respectively, one of the NL Central’s heavyweights, St. Louis, plays in the seventh-smallest. And large-market San Francisco and small-market Oakland share the same MSA, the 11th-largest San Francisco-Oakland-Hayward metro area. Yes, I know, stadia and television deals and misperceptions and all that, but the point remains that some of the teams we think of as small- or large-market really aren’t.

When we talk about large markets in baseball, we’re really talking about not just large populations but also large media markets, large fan bases, large owners’ wallets, and everything else that goes into large payrolls. Large payrolls transfer Detroit (the Tigers had the third-largest payroll in baseball last year) and San Francisco (seventh) from not-so-large MSAs to large baseball markets.

By any measure, the Astros should be considered a large-market team. Houston is the fourth-largest city in the country (behind New York, Los Angeles, and Chicago) and the fifth-largest MSA (Dallas/Ft. Worth is also larger). And Houston has a rich owner. Granted, all baseball owners are rich. But even within that peer group, Jim Crane stands out. His net worth is estimated at $2 billion. He’s been named the best golfer CEO, which is the most baseball owner recognition imaginable. He’s listed one of his houses, on Pebble Beach, for $38 million. The B-52s performed at his (now ex-) wife’s 60th birthday party.

Yet Houston, a team that by almost every imaginable metric is large market, has played small market. The last time the team won its division was 2001. Since then, despite three Wild Card appearances, the Astros have won the fifth-fewest games in the majors, and they’ve had the payroll and attendance to match: 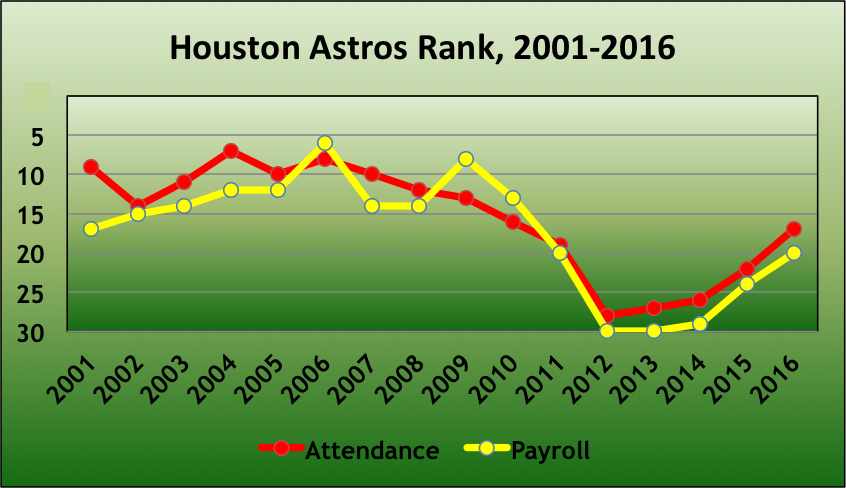 Expect the uptick that began in 2014 to continue. We’re going to remember 2017 as the year the Astros became a large-market team. They’ve always been one, demographically. This year they’ll begin to play the part. Start with the team on the field. PECOTA projects Houston to finish 93-69 for the best record in the American League, eight games ahead of the Mariners and nine up on the Rangers in the AL West.

But the transformation isn’t just a case of Ws and Ls. To get where they are today, the Astros performed a complete teardown. Their 162-324 record from 2011-2013 is the worst three-year streak in baseball since the 1963-1965 Mets went 154-332. Their payroll, which was $101 million in 2006, plunged to $14.7 million in 2013. Under general manager Jeff Luhnow, the analytically-oriented team was decried for its ineptitude and its penury.

But the Astros’ game plan was always obvious. When Sports Illustrated featured the Astros on the cover of its June 30, 2014 edition with the caption “Your 2017 World Series Champs,” it was clear that the team, bolstered by high draft picks arising from a succession of terrible records, was building a young, strong team. Jose Altuve, Carlos Correa, George Springer, Dallas Keuchel, Lance McCullers, and Alex Bregman, among others, were internally developed. Despite the players promoted to the majors, the Astros’ farm system still ranks no. 11 in baseball.

And, without much fanfare, the Astros have begun spending money like a team playing in one of the nation’s largest markets and owned by a plutocrat. It began last July, when the club signed Cuban veteran Yulieski Gurriel to five-year, $47.5 million deal. (The $14.4 million he’ll make this year nearly matches the team’s total payroll just four years ago.) In a 19-day span beginning November 17, the Astros took on $47.5 million in salary for 2017:

At the end of the year, Cot’s Contracts ranked the team’s 40-man roster payroll as the 18th-highest in baseball. And in January, the team avoided arbitration with Keuchel by signing him to a one-year contract for $9.15 million, a $1.9 million raise. Granted, none of these contracts rise to the level of, say, Zack Greinke for $206.5 million. But neither are the Astros done. Altuve (a free agent in 2018, though the team has options through 2019), Correa (arbitration eligible in 2019), and Springer (arbitration eligible in 2018) seem likely to be extended in the near term (though Altuve is a Scott Boras client). The team’s young stars are going to get more expensive.

And then there’s the pitching staff. The Astros have a strong, deep bullpen, with the lowest DRA in the American League in 2016. It’s cheap too, but then pretty much every bullpen that’s not headlined by someone named Chapman, Jansen, or Melancon is cheap. The rotation, though, is shakier, ranking eighth in the league in ERA and ninth in DRA in 2016. A return to health and form by Keuchel, McCullers, and Morton could give the team a top-flight rotation. But that’s a long shot. The team has been linked to speculation around White Sox left-hander Jose Quintana (under contract for $37.85 million through 2020, assuming team options) and would be a logical suitor for Rays right-hander Chris Archer (under contract for $39 million through 2021, assuming team options).

With a lot of young cost-controlled players, the Astros aren’t candidates to trip the luxury tax threshold anytime soon, but they have the ability to pay for upgrades now and play in the free agent goldmine after the 2018 season. Regardless of who gets signed, re-signed, extended, or acquired, the sad-sack Astros of the beginning of the decade are behind us. The team’s done punching below its weight in the fifth-largest MSA in the country. The big-market Astros are arriving.

You need to be logged in to comment. Login or Subscribe
INWarner413
Altuve isn't a free agent in 2018; the Astros have team options for 2018 and 2019 at 6 and 6.5M, respectively.
Reply to INWarner413
mainsr
Ah crap! I knew that. Some synapse misfires. Thanks, I'll get it fixed.
Reply to mainsr