As I discussed in my last post, one of the reasons we’re excited about our pitching metrics is that they allow us to answer new questions. On Monday, I looked at the pitchers who improved their control (using our CS Prob measure of Called Strike Probability) the most from 2015 to 2016 (minimum 60 innings in both years). This time I’m going to look at command.

As you’ve learned if you’ve been reading the articles this week, we measure command via Called Strikes Above Average, or CSAA. CSAA evaluates pitchers’ ability to locate their pitches in a way that results in more strikes getting called. It takes into account the umpire’s propensity to call strikes on certain pitches and the catcher’s ability to frame the pitch. The CSAA leaderboard includes stars, like Kyle Hendricks of the Cubs, and also guys with fringe-y stuff who succeed by locating their pitches on the periphery of the zone where they’re more likely to be called strikes but not hit, like Zach Davies of the Brewers.

Here are the pitchers whose command, measured by CSAA, improved the most in 2016 compared to 2015. With our minimum of 60 innings in each season, Davies, who had only 34 innings for the Brewers in 2015 (he pitched 128.1 at Triple-A) falls off the list. 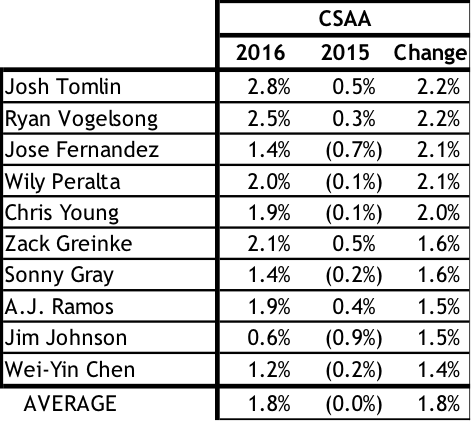 Remember, the pitchers with the best command aren’t necessarily the best pitchers. A pitcher with overpowering stuff doesn’t need pinpoint command of his pitches. Clayton Kershaw’s 2016 CSAA was 0.2 percent. Andrew Miller’s was -0.4 percent. Clearly, if you’re building a pitching staff, you take them before Josh Tomlin. But this is an interesting list, as it features pitchers who went from, in aggregate, league-average command in 2015 to well above average in 2016.

And what did that command buy them? Consistent with the other reports in this series, I’ll measure that using DRA-, which is BP’s Deserved Run Average scaled to a league average of 100, the lower the better: 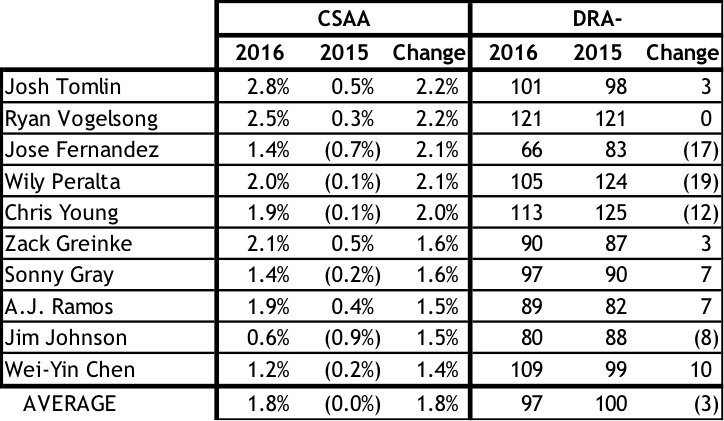 That’s not overwhelming. There are four pitchers who were a lot more effective in 2016 than 2015, and six who … well, weren’t. On average, the 10 pitchers who exhibited the largest improvement in command went from league average in 2015 to a little better than average in 2016. It’s worth noting, though, that on average they beat their PECOTA DRA projections fairly handily. Improved command enabled them to do better than expected as a group.

How about pitchers whose command went south? 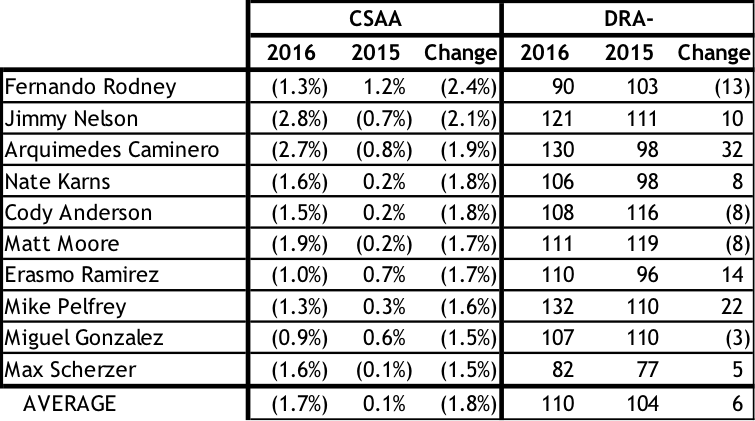 That’s not a pretty picture overall. This group was worse than average in 2015 and was a good deal worse in 2016, and they were a good bit below their PECOTA projections for DRA as well.

The presence of National League Cy Young Award winner Max Scherzer on the list of those exhibiting worse command is instructive. As I said earlier, if you have overpowering stuff you don’t need great command to be effective. While I used Kershaw and Miller to illustrate that point, Scherzer was probably the poster child for great pitcher/not great command in 2016.

As I’ve done in the other articles, I’m also going to look at all 175 pitchers who pitched at least 60 innings in both 2015 and 2016. I’ve divided them into identically-sized deciles and calculated the weighted average change in command and DRA- for each decile. Here’s how it looks: 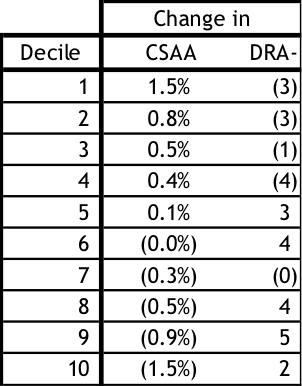 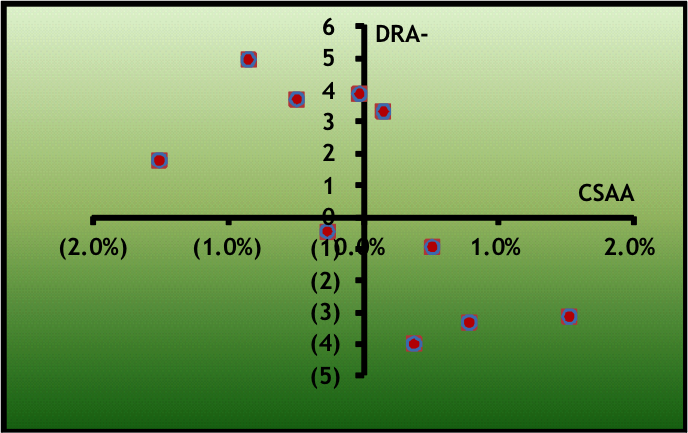 The distribution of data points is about what we’d expect, with most in the upper-left quadrant (worse command = worse DRA) and lower-right quadrant (better command = better DRA). The correlation coefficient between CSAA and DRA- for these 10 points is -0.68, which is pretty strongly negative, i.e., as command goes up, DRA- goes down. On an individual basis, the correlation is considerably weaker; it’s -0.18 for the 175 pitchers who threw 60 or more innings in both seasons.

While we can say in general that an improvement in command yields an improvement in results, a prediction based on that relationship is precarious on an individual basis. For every Wily Peralta or Arquimedes Caminero, there’s going to be a Wei-Yin Chen or a Fernando Rodney, so to speak.

So is a New Year’s resolution to improve command a wise one? Well, sure. It is. The pitchers in the top decile for improved command in 2016 reduced their DRA-. So did pitchers in the second decile. And the third. And the fourth. That’s worthwhile.

But improved command isn’t everything. Yes, if you’re Peralta, boosting your command can play a role in lifting you from a -1.2 WARP pitcher in 2015 to a 1.3 WARP pitcher in 2016. But, as noted above, you need effective pitches as well as effective command. If you’re really good at locating a four-seam fastball that sits at only 91 mph, a 90-mph twoseamer, and a 88 mph cutter, while mixing in a curve that generates only a nine percent whiff rate and a change that yielded a .394 batting average and .636 slugging percentage on contact … you’re still going to be 2016 Ryan Vogelsong, with a 4.81 ERA, 5.04 FIP, and the same 5.71 DRA that you had in 2015. (But don’t worry, we’ll still name an award after you.)