The Reds came into their series opener against the Cubs having allowed 239 home runs on the season, two shy of the dubious major-league record held by the 1996 Tigers. To avoid breaking it, the team that had surrendered 1.6 long balls per game would need to keep the opposition to two, total, over the next 13.

Then, Addison Russell clobbered a pitch from starter Tim Adleman deep into the left-field stands:

And then, two batters later, Willson Contreras cleared the back wall of Wrigley Field all together:

The record was tied. And no one was more fed up with watching bombs soar far into the night than catcher Tucker Barnhart:

But he’d have to do it once more:

No. 7 on the year for Jason Heyward was no. 242 given up by Reds pitching and no. 94 served on a platter by their bullpen, also a major-league record. It helped the Cubs go on to win, 5-2, and shave their magic number to secure the NL’s best record to five.

Another day, another Giants bullpen meltdown.

This one came on the heels of a fantastic duel between left-handers Madison Bumgarner and Clayton Kershaw. The aces combined on 13 innings of one-run ball. The lone run was produced via an infield single, stolen base, throwing error, and wild pitch. Kershaw walked one and struck out seven. Bumgarner fanned 10 without once throwing ball four. And that 1-0 margin held up until the last of the ninth.

Staring at his bullpen list like a vegan eyeing a butcher-shop menu, Bochy elected to stick with Derek Law, the Giants’ most consistent reliever when healthy, even though he'd looked shaky while finishing the eighth. Law faltered, allowing a single to pinch-hitter Andrew Toles. Bochy then summoned Javier Lopez to face Corey Seager, who, after a spirited battled, bounced a hard grounder past the dive of Joe Panik and into right field, moving Toles over to third. With the right-handed batting Justin Turner due up, Bochy went to Hunter Strickland, who raced ahead in the count 0-2, before committing an 0-2 mistake that Turner punched into right field to tie the game. Up next, Adrian Gonzalez:

The loss dropped the Giants into a tie with the Cardinals—5-3 winners over the Rockies—for the second wild-card spot, with both clubs at 79-71. The Mets, who lost 7-3 to the Braves, are a game up on both for the right to host the one-game playoff.

Monday’s matinee between the White Sox and Royals, a makeup of a rained-out contest from May 26th, was a tale of contrasts in efficiency between the starting pitchers. Yordano Ventura, who took the hill for the hosts, needed just 106 pitches to book his first career nine-inning complete game. Carlos Rodon, who went for the guests, required 96 just to get through four frames and five batters.

When the length of an outing is described in terms of X innings and Y batters, and Y is a number greater than or equal to five, it’s seldom good news for the pitcher in question. This was no exception. Rodon’s fifth began with the game tied 2-2, but that wasn’t the case for long. Two singles, an error by Rodon, a stolen base, and a wild pitch had Royals running roughshod all over the bases. And all of them scored when Kendrys Morales thumped a 2-0 challenge fastball into the Kauffman Stadium fountains:

That three-run tater sent Rodon to the showers. Alcides Escobar and Ned Yost soon followed, as both got the thumb from home-plate umpire Toby Basner for (unnecessarily) arguing balls and strikes. Ventura, on the other hand, would be around for a while.

The right-hander liked Basner’s zone just fine, filling it up with a four-pitch mix

that produced 72 strikes in 106 tries. After walking 12 batters over his previous 17 1/3 innings, Ventura issued just one base on balls in this one while punching out five. More importantly, after chucking 100 pitches to get through 4 1/3 innings his last time out, Ventura needed just six more than that to go the distance on Monday afternoon.

The White Sox scored three runs—two of them on homers by Jose Abreu and Carlos Sanchez—so the 25-year-old Ventura is still searching for his first major-league shutout. But he does now have a victorious complete game, and that’s a positive development in what’s been a tumultuous third full year for the still-young, still-electric right-hander the Royals will need more from in 2017.

When it comes to efficiency, though, no one trumped Rick Porcello on Monday. The AL Cy Young hopeful added another fine bullet point to his résumé with a complete game win over the Orioles that he wrapped up in a tidy 89 pitches.

Porcello was spotted a two-run lead in the third inning, when Dylan Bundy fell behind Mookie Betts 2-0, and then missed middle-in with an elevated fastball that Betts launched deep to left:

That was one of the few occasions on which Bundy failed to log a first-pitch strike, something he did to 18 of his 23 foes on the day. But he paid the price steeply that time, and while Bundy frequently got ahead of the Red Sox, he wasn’t nearly as effective at putting them away. The right-hander struck out three in five innings, but David Ortiz got him for a two-run shot of his own before he departed, and that was all Porcello would need.

Up 5-0 at the midway point, Porcello stayed in attack mode the rest of the way, tossing 65 of his 89 pitches for strikes. He gave up two runs, including an Adam Jones solo shot, but never exceeded 14 pitches in an inning. In five of his nine frames, he stayed below 10.

According to the Baseball-Reference Play Index, Porcello is the first visiting hurler to record a complete game at Camden Yards in fewer than 92 pitches. Sidney Ponson plowed through the Devil Rays in 88 on April 20, 2004.

Porcello and the Red Sox, though, were certainly less concerned with that historical tidbit than they were with the 5-2 victory—a big one in the race for the AL East. Boston is now four games up on Baltimore with only 12 left to play.

If this baseball wanted a beer, Giancarlo Stanton saved it a roll around the ballpark:

The Marlins outfielder sent it hurtling toward the Budweiser stand in left-center field at a speed of 115 mph, notching his first home run since August 13th in impression fashion. It was the first tally scored in what wound up a one-run game, as neither Nats starter A.J. Cole nor Marlins lefty Wei-Yin Chen completed the fifth inning.

Five Miami relievers combined to blank the Nationals over the remaining 4 2/3, giving the offense plenty of time to deliver a 4-3 win.

Brandon Drury thought he had himself a single and an RBI, but Adam Rosales, Wil Myers, and a little luck stood in the way:

And, since his dreams of giving the Diamondbacks a third-inning lead yesterday were dashed, we’ll give Drury a little love as we look ahead to today’s action…

As the Diamondbacks consider their-long-term future—with roles in the dugout and upstairs both seemingly uncertain amid the weekend firing of senior vice president of baseball operations De Jon Watson—it’s time for fans in the desert to look for bright spots with the 2016 season winding down. Here’s one possible ray of hope: 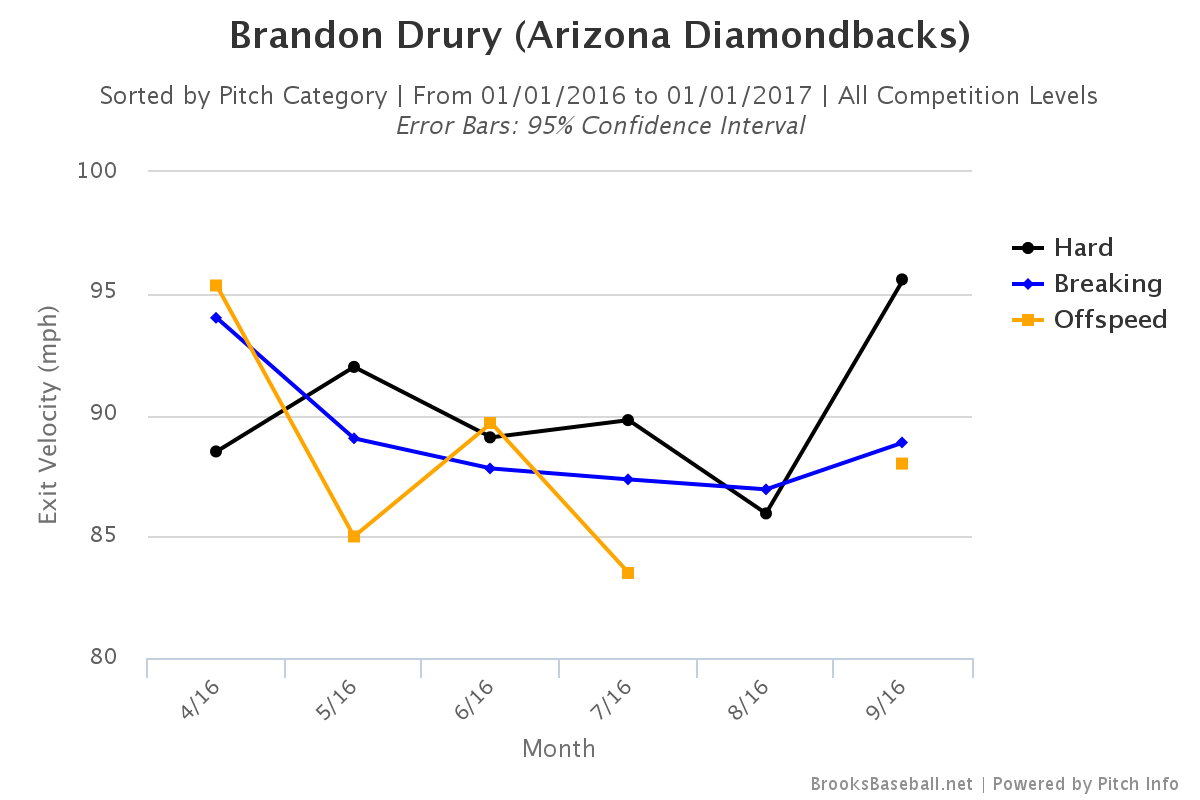 Drury, a former top-100 prospect who’s seen time at myriad positions this season, has been smacking the ball around since the calendar flipped to September—or, more accurately, since he celebrated his birthday on August 21st. The 24-year-old was batting .251/.297/.407 when he woke up that day; since blowing out candles and eating cake, he’s at .397/.451/.630 in 82 plate appearances, good for an 80-point boost to his season OPS. That hike in performance is largely attributable to the surge in Drury’s mean exit velocity, which is approaching 95 mph this month, or what the league leaders—Nelson Cruz, Giancarlo Stanton, and the like—average for the year.

The sample here is still small, but it’s growing, and the prospect pedigree suggests that there’s reason to believe in the legitimacy of the ex-Braves farmhand’s bat. Our own Christopher Crawford ranked Drury as the third-best player in Arizona’s thinned system over the winter, citing his ability to “make consistent hard contact without much swing-and-miss.” That skill set didn’t translate against major-league pitching for much of this season, but it’s now been on display for almost a month, with manager Chip Hale writing Drury’s name into his starting nine on a daily basis. The Grants Pass, Oregon, native will try to keep on raking this evening, as the D’backs continue their series with the Padres at Petco Park. Paul Clemens toes the rubber for San Diego against Arizona’s Archie Bradley (10:10 p.m. ET).

You need to be logged in to comment. Login or Subscribe
oldbopper
The modern theory of baseball that an excellent starter must be replaced by a group of stiffs in the later innings is, shall we be polite, being tested this season. Somebody should tell the managers that this only works if you can run out major league quality relief pitchers. The Giants bullpen, has no bulls, just ground beef, and watching it implode every night warms the heart of this long time fan. Bumgarner, an ace in every way, has shown that he can handle the load, none the worse for wear after throwing 270 innings in 2014. I don't know if he asked to come out but he had not reached 100 pitches when Bochy replaced him last night. The Giants worked hard to blow another one but they earned the loss.
Reply to oldbopper