The Labor Day Monday Takeaway
The Royals were held scoreless in the top of the first inning yesterday, and then Ian Kennedy was forced to face the sizzling-hot Brian Dozier in the home half. Dozier, as Kennedy found out on his very first pitch of the afternoon, is currently hitting all of the homers:

Dozier went deep on Friday, did so again on Saturday, and added one more long fly to his collection on Sunday. Then, on Monday, he piled on three more, this time at the expense of Royals pitching, after the White Sox suffered his onslaught during the previous three days.

All this yardwork just the latest chapter in a remarkable turnaround by the 29-year-old second baseman. Dozier went to bed on May 22nd batting .199/.284/.318. Since then, he’s hit .307/.373/.658, including 21 homers since July 31st, a period over which no other major leaguer has drilled more than a dozen. Our own Aaron Gleeman chronicled the mastery of the man who might be baseball’s unlikeliest slugger in late August, and Dozier has kept on slugging since.

Thanks in large part to Dozier, the Twins have boasted one of baseball’s best offenses since the All-Star break:

Twins have scored MLB's third-most runs in second half behind Rockies and Red Sox. Same lineup, except catcher, is potentially set for 2017.

So, what about their pitching?

We’ll call that a work in progress.

Kendrys Morales’ three-run bomb in the top of the fifth turned a 4-2 Twins lead into a 5-4 Royals edge, and the visitors never looked back. Kansas City tagged rookie starter Jose Berrios for five runs in as many innings, and three Minnesota relievers allowed two runs apiece.

That adds up to 11. The Twins scored five—four on Dozier’s homers, and one more on a sacrifice bunt by Eduardo Escobar, which turned into a run when Kennedy failed to cover home plate after it was vacated by catcher Salvador Perez—

which means they lost by six. According to the Baseball-Reference Play Index, the last 75 teams to have a player log a three-homer game had all at least stayed within four runs. The last to lose by a half-dozen or more was the Diamondbacks, who let Chris Young’s efforts go to waste seven years ago today.

Dozier, Joe Mauer, and the young’uns have the Twins offense moving in the right direction. But as Paul Molitor’s squad looks ahead to 2017, they sorely need Berrios and the arms to catch up.

Quick Hits from Monday
The Royals weren’t the only team exhibiting shaky bunt defense Monday. Up in Milwaukee, the Brewers were, too:

With his Cubs up 4-1 in the top of the eighth, Joe Maddon put the safety squeeze on with Javier Baez at the plate, then looked on gleefully as the run scored and Baez reached.

First baseman Chris Carter charged to field the bunted ball, which was ultimately corralled by the pitcher, Ben Rowen, who spun around to throw to first and found no Brewer within a mile of the bag. Second baseman Scooter Gennett, lined up at double-play depth, made no move to his left on the play. While we don’t know exactly how the Brewers planned to defend a bunt in that situation, we do know that someone done goofed.

That mistake compounded the damage in a frame that was already plenty rough, as the Cubs scored four times to turn a 3-1 margin into a 7-1 canyon. They won 7-2, behind six innings of one-run ball from Kyle Hendricks, whose ERA tumbled down to 2.07.

Hendricks, by the way, was the only Cubs starter who did not face the Giants during those clubs’ just-completed four-game series at Wrigley Field. His rotation-mates were chiefly responsible for limiting the Giants to four or fewer hits in each leg of that set, which the Cubs took 3-1.

After authoring just 14 hits in 132 at-bats in Chicago, the Giants surely were thrilled to see Coors Field next on their schedule. They arrived there around 10 p.m. on Sunday night, readied to take on the Rockies on Monday, and … were promptly held to two hits by Chad Bettis.

Bettis got ahead—throwing first-pitch strikes to 20 of his 29 foes—and stayed ahead all afternoon, walking none while fanning seven. Just nine of his 33 breaking balls missed the zone without drawing a swing, and only 30 of his 103 deliveries weren’t strikes overall. He largely mixed three offerings, leaning most heavily on his 91-94 mph four-seam fastball, which the Giants put into play 14 times. Only one of those produced a hit.

With their guests displaying heretofore unseen impotence at Coors Field, the Rockies put this one away early:

Carlos Gonzalez’s third-inning grand slam was the exclamation point on an altogether awful afternoon for Matt Moore, who walked the eighth-place hitter, Cristian Adames, twice, and the pitcher, Bettis, once, all in that same frame. He wouldn’t finish it, leaving after just 2 2/3 innings of work in his worst effort since coming to the Giants at the trade deadline.

Bettis did finish it. The 27-year-old earned his first career complete game and shutout in the 6-0 Rox win.

Coming off a nearly sleepless night following his promotion from Triple-A Las Vegas, Matt Reynolds slipped on the Mets’ road grays and took the field at Great American Ball Park ready to roll:

Reynolds’ third-inning oppo taco, one of three hits on the day for the shortstop, opened the scoring in Cincinnati yesterday. By day’s end, it remained the deciding run. Bartolo Colon and three relievers combined to blank the Reds in the 5-0 decision.

With the Giants losing, the Mets moved to within 1 ½ games of the National League’s top wild-card seed and stayed within a game of the victorious Cardinals for the road ticket to the one-game playoff. They picked up a game on the Marlins, who fell to the Phillies 6-2 and are now five back of the Cards, and did the same to the Bucs, who lost to the Redbirds and are 4 ½ out.

Raul Alcantara is by no means a perfect pitching prospect, but you might count control as one of his greatest strengths. After all, Alcantara had issued just three walks in 45 2/3 Triple-A innings before his promotion to Oakland, and he’d hit just three batters all season in 135 2/3 frames between Midland and Nashville. So, naturally, his first major-league inning featured not one,

hit batsmen for the Angels. Tack on a bases-loaded walk, and it was an all-around bad time for the 23-year-old Dominican.

Alcantara did make his way through three innings, but he coughed up five runs on five hits and a walk without recording a strikeout. And then, of course, there were those three HBPs and a balk, which is really what set this debut apart. Per the Play Index, Alcantara is the first pitcher ever to hit three batters and be called for a balk in his first appearance on a big-league hill.

The Halos went on to down the A’s by a final score of 10-8. Andrew Bailey, who went to the Red Sox in the lopsided trade that brought Alcantara—plus Josh Reddick and minor-league infielder Miles Head—to the Athletics, notched his second save as an Angel with a clean ninth.

…because it came three innings after this…

The Mets and Reds have two more games left in their series, and it seems safe to say that Wilmer Flores will think twice before testing Adam Duvall’s arm again.

What to Watch on Tuesday
Brian Dozier isn’t the only second sacker in the midst of a power binge these days. Lately, if Rougned Odor’s gotten under a ball, there’s an excellent chance that he’s begun trotting shortly after it left his bat: 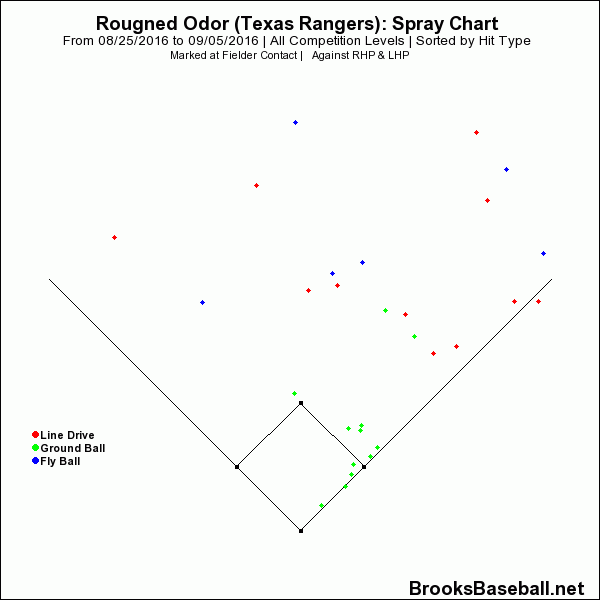 You’re looking at Odor’s spray chart since August 25th. Over the two weeks of play before Monday, he was sporting a 54.5 percent HR:FB ratio. During that same period, he’d slapped a league-low 5.6 percent of his batted balls to the opposite field. Neither of those trends changed on the holiday:

The 22-year-old’s 30th blast of the season was also his sixth in the last half-dozen games. He’ll look to bring the boom to Safeco Field again this evening, when Martin Perez and the Rangers take on James Paxton and the M’s in game two (10:10 p.m. ET).

You need to be logged in to comment. Login or Subscribe
dpotemkin
I guess I have to be the one to fart at the garden party and ask the question: Do we think it's possible that Dozier has been using a performance enhancing substance?
Reply to dpotemkin
jfranco77
I mean, probably not, but the subtitle for the article includes "Brian Dozier is channeling June 1998 Sammy Sosa" so it might not be just you.
Reply to jfranco77