There’s a growing trend in hitting circles, from the pros on down to Twitter, encouraging batters to do what they can to avoid hitting the ball on the ground. If one of the pitcher’s goals is to kill worms, the theory goes, then all hitters—save, perhaps, for the very fastest—should seek PETA’s approval by not doing so every chance they can. Jeff Albert, the minor-league hitting coordinator for the Astros, is among those who share such insights in 140 characters or less:

But we're still talking about whether or not to hit grounders

Josh Donaldson voiced his contempt for grounders on MLB Network, at the 6:30 mark here:

And right now, the major-league posterchild for launching the ball upward is a 28-year-old rookie named Ryan Schimpf.

Schimpf—who joined the Padres as a minor-league free agent after parts of seven seasons in the Blue Jays farm system—hadn’t taken a swing in the majors before injuries and a hot start at Triple-A El Paso forced the Friars to give him a chance. He’s listed at 5-foot-9 and 180 pounds. And his spray chart looks like this: 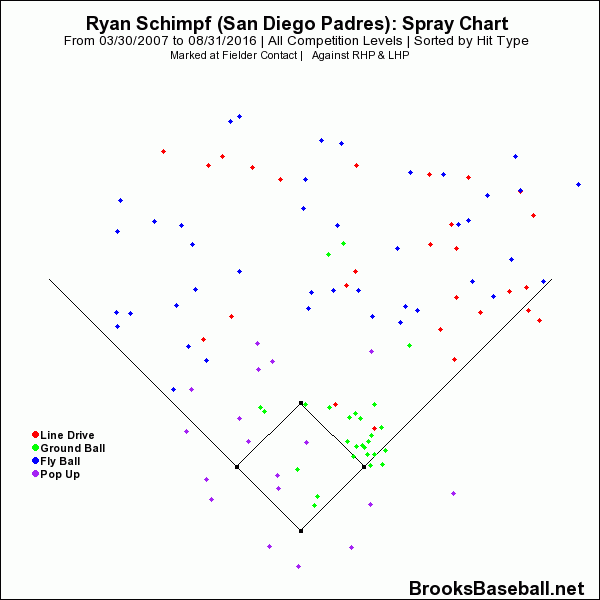 Schimpf hits dingers, and also doubles and triples, but not very many singles. He had 46 hits as of yesterday, and 34 of them (73.9 percent) had gone for extra bases. How? Simple: Remember, he doesn’t hit the ball on the ground.

Setting the bar at 200 plate appearances, Schimpf has the lowest ground-ball rate in the majors by 4.0 percentage points. He’s at 23.2 percent, then there’s a colossal gap, and after that you’ll find Brandon Belt, at 27.2. When it comes to hitting flyballs, only three big-leaguers are above 50 percent, and Schimpf towers over them at 61.2. Next is Jarrod Saltalamacchia, all the way down at 54.4 percent, and several ledges below that sits Brandon Moss, at 50.9. 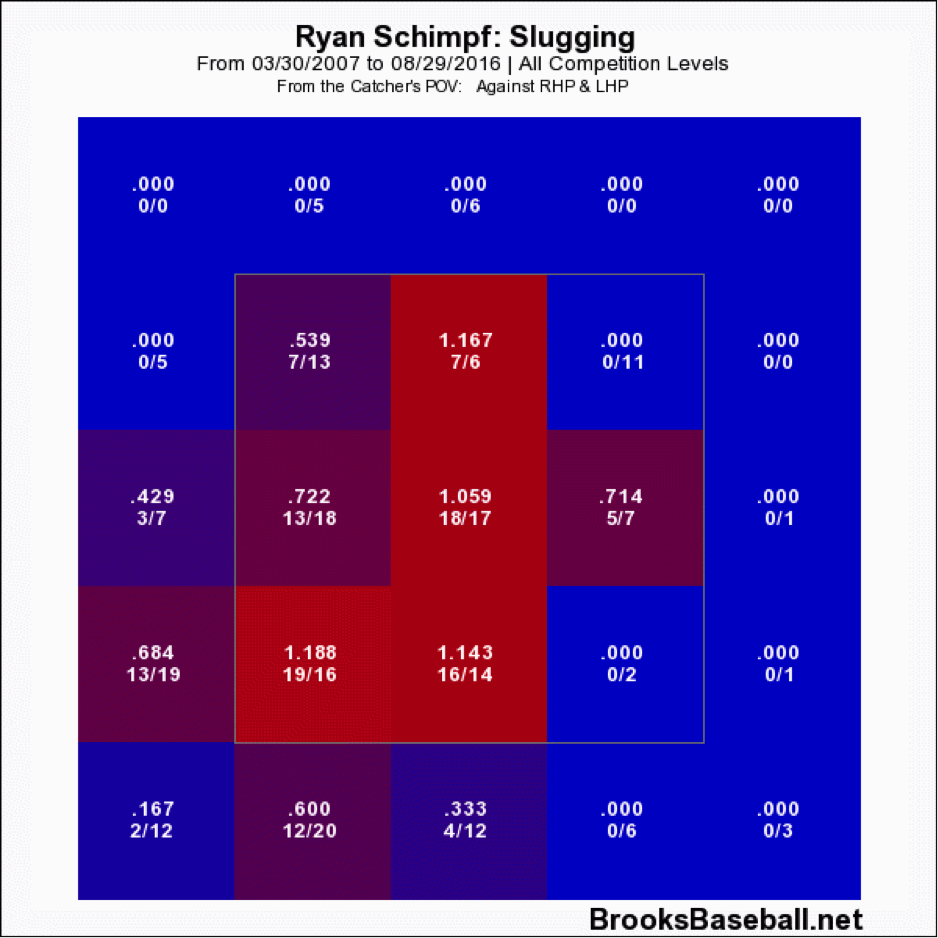 Pitchers who’ve attacked Schimpf middle-away have rarely lived to tell the tale. He’s destroyed just about everything over the outer half of the plate, slugging .705 on sinkers, .614 on four-seamers, .607 on changeups, .and .556 on curves.

Considering that Schimpf has logged just 234 plate appearances since forcing his way up from Triple-A El Paso, it’s fair to ask whether his extreme batted-ball profile is sustainable. The answer is probably “yes.” About four years ago, our own Russell A. Carleton explored the sample sizes at which various offensive numbers stabilize; he found that ground-ball and fly-ball rates are among the quickest to reflect a hitter’s true talent, leveling off after about 80 balls in play. At press time, Schimpf was at 129.

While hitters of his breed are exceptionally rare, Schimpf isn’t the first to blaze the airborne trail with such frequency. He’s the second. Here’s a complete list of the batter-seasons since 2007—the first year for which spray-chart data is available on Brooks Baseball—with at least 200 plate appearances and a ground-ball rate below 25 percent:

Just after the Blue Jays selected Schimpf out of Louisiana State University with their fifth-round pick in the 2009 draft, Rod Barajas began pioneering, to a small degree, the peculiar batted-ball distribution that Schimpf is producing now. But the similarities between Barajas and Schimpf end there. For one thing, Schimpf is a diminutive infielder who bats from the left side, while Barajas was a 6-foot-2, 250-pound catcher who hit right-handed. Late-career Barajas also employed a swing befitting of the cleanup man in a beer-league softball lineup. Here’s the former Met, Dodger, and Pirate’s results spray chart from those three seasons: 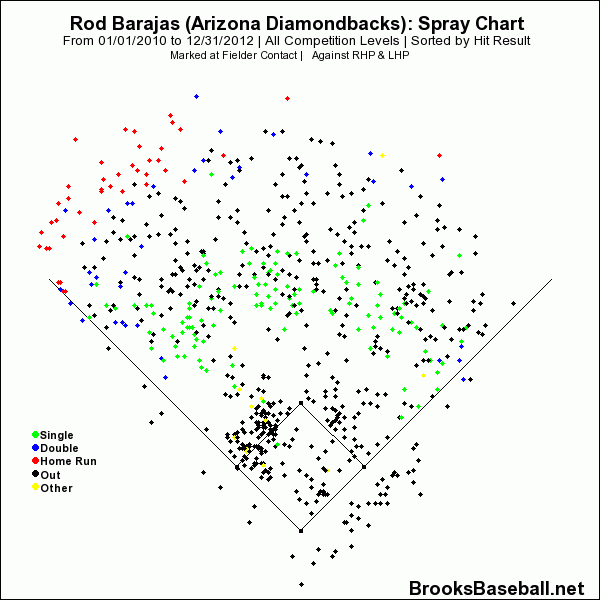 Besides a smattering a doubles and a solitary homer, Barajas’s power was exclusively to the pull side, which makes sense when you consider the swing behind it: 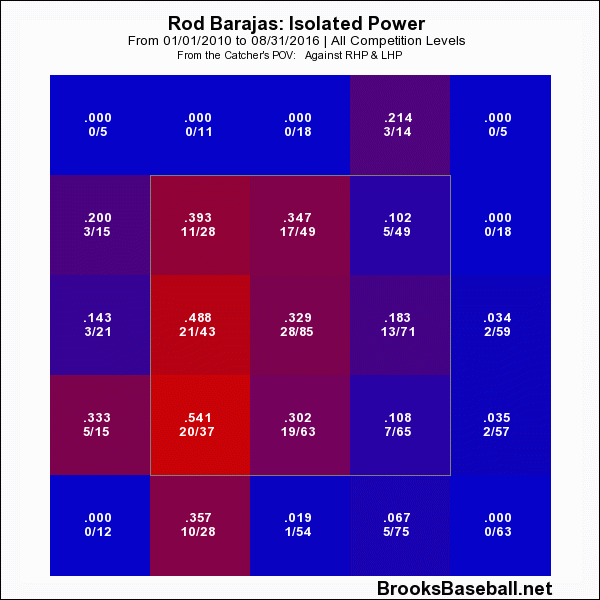 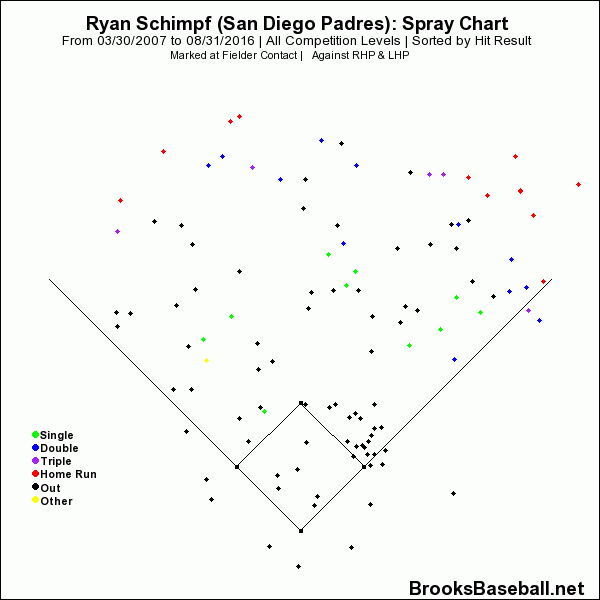 with doubles and triples to both gaps, plus a handful of opposite-field big flies, accompanying the homers yanked to right. Unlike Barajas, whose pop was confined to pitches on the inner half of the plate, Schimpf prefers the ball middle-away, 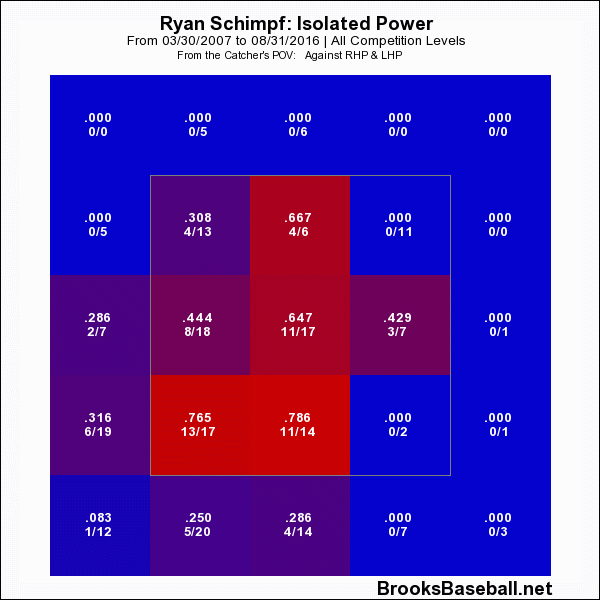 especially low and away, where the thunder in his bat booms loudest.

As you might imagine, Schimpf’s swing differs greatly from the one that Barajas used to generate his heavy dose of flyballs.

When discussing Schimpf’s swing in June, a couple of weeks after his major-league debut, Padres hitting coach Alan Zinter highlighted three strong points: “He gets all his body into it from the ground up. He’s got bat speed and he’s got a good swing plane.”

There are five key components to pay attention to here, all of which serve to endear Schimpf’s swing to the man who now oversees it:

2. A fairly deep scap load bringing the back elbow just above shoulder height as the front foot lands

4. An intent to get on plane with the ball deep and swing upward through the hitting zone

5. A leveraged lead arm delivering the barrel to contact.

Some of those swing elements are more visible from the side:

Schimpf, though, has always had power. He slugged 22 home runs as a junior at LSU, a significant reason why the Blue Jays saw fit to invest a fifth-round pick in the New Orleans native. That begs the question of why it took so long for Schimpf to emerge as a big-league contributor, much less a hitter opposing pitchers might justifiably fear when he digs into the box. Luckily, we have two pieces of information through which to view the development in Schimpf’s offensive game.

Our own Mark Anderson laid eyes on Schimpf on a half-dozen occasions in the first half of the 2014 season and turned in this Eyewitness Account, grading the then-New Hampshire Fisher Cat as a future role-45 player with low risk and a 2015 ETA. Anderson noted that Schimpf might actually be shorter than 5-foot-9, but that he compensates for his stature by packing muscle into his frame, giving him excellent overall strength. Here are the other relevant parts of Anderson’s thorough look at what Schimpf might offer his future big-league employer:

A little over two years ago, Anderson saw many of the same positives that Zinter called out, from the timing that enables Schimpf to turn his raw strength into functional power, to the lift in his swing plane that produces the flyballs that define Schimpf’s game. He also pointed out the mature approach that now fuels Schimpf’s 13.7 percent walk rate and the potential vulnerabilities in his swing—premium velocity, quality secondaries—that could inflate his strikeout rate (28.6 percent) and complete his three-true-outcomes (49.1 percent) profile.

But if Schimpf’s first 234 major-league plate appearances are to one day be looked back on as a harbinger for his work going forward, he’ll have to continue exceeding Anderson’s expectations of 50-grade playable power and a 45-grade hit tool. In other words, some of the former flaws in his profile must no longer be present or at least be gradually fading. While we now have enough data to suggest that Schimpf’s extreme batted-ball-type allotment might be robust, we don’t yet have an adequately large sample to anoint him a first-division player, the level to which he’d project if we simply extrapolated his 2.8 WARP over a full season.

Fortunately for the Padres, there are several reasons to believe that Schimpf is a better hitter now than he was a couple of years ago. While quality video of Schimpf from the point in time when Anderson saw him is hard to come by, we do have clips from minor-league spring training in 2012. Here’s a half-speed side view of one game swing:

There are a few items worth noting here:

While one game swing could have fluky deviations from a player’s desired cut—and, really, the two GIFs and Anderson’s report are all snapshots in time—these differences are also present in the set of batting-practice swings Schimpf takes here

and the progression over time is encouraging.

Beyond the positive tweaks that Schimpf has made to his swing over the past four years, there are also intriguing developments in his results. After not “[using] the opposite field much” in Double-A in 2014, he’s sprayed the ball to left 24.8 percent of the time so far this year, which places him dead center (156th) among the 312 major-leaguers with at least 200 plate appearances in 2016. Schimpf’s whiffs-per-swing rate on breaking pitches is 27 percent, also right around the league average. And, most notably in the latter area, while 2014 Schimpf projected to “swing through quality secondaries in the zone,” this year’s version hasn’t: 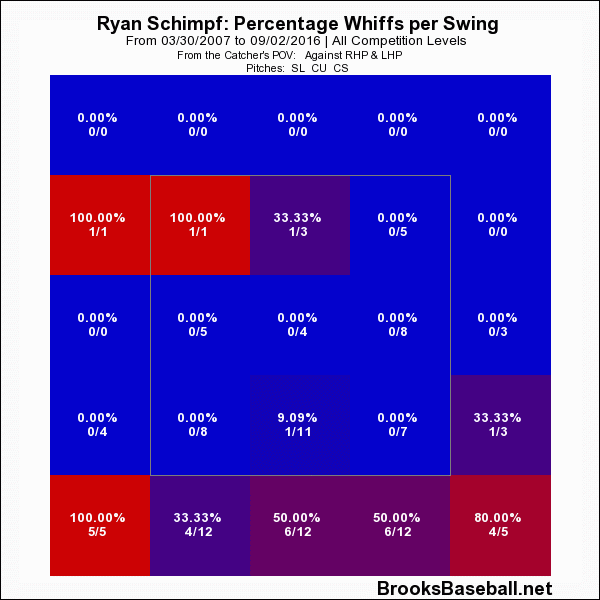 Now, it’s worth noting that the sample size here is still small, and that big-league advance scouts and pitchers are evil beings who will try their best to thwart Schimpf’s early success. As is the case with all rookies, age 22 or 28, eventually the league will adjust, and it will be incumbent on Schimpf to adjust back. But the inevitable first slump hasn’t come yet.

With less than 30 games left in the regular season, for all intents and purposes, the National League Rookie of the Year race is over. Corey Seager will win it. And with 6.1 WARP at the end of August—batting .320/.379/.540 as a major-league shortstop at the age of 22—he should. But among rookies with at least 200 plate appearances, Seager is not the True Average leader. Not even close.

Sitting atop the rookie TAv leaderboard—fifth among all players who’ve crossed 200 PA, behind only Mike Trout, Kris Bryant, Yoenis Cespedes, and Daniel Murphy—is Ryan Schimpf at .347. The gap between Schimpf and Seager (.332) is 15 points, or one point smaller than the one separating Starlin Castro, a league-average hitter by this metric at .260, from Xander Bogaerts, at .276.

That isn’t meant to equate Schimpf with Seager, a potential superstar six years the minor-league veteran’s junior. Nor is it meant as a prediction that Schimpf will retain his place among the majors’ best bats. Time will tell just how real the breakout is and what heights he’ll attain long term.

But already, just two months into his major-league stay, Schimpf has emerged as the strongest, most extreme case in point for those who preach the value of hitting the ball in the air.

You need to be logged in to comment. Login or Subscribe
TGT969
Boy how did you find not just one but two shots of Rod Barajas making contact in a Pirate uniform! Mention him now and fans now roll into a ball and start screaming "Nevermore"
Reply to TGT969
statsrath
Great question... luckily MLB.com's highlight archives go back years, so I just had to locate the rare game(s) in which Barajas hit a home run. Since I never experienced him being on the team I root for, I kind of miss watching Barajas try to launch everything at the moon hanging over left field.
Reply to statsrath
curto
Barajas was Schimpf's manager in El Paso this year before his promotion.
Reply to curto
statsrath
Whoa, that is an awesome coincidence!
Reply to statsrath
oldbopper
Every year I would go to New Britain Stadium, every year Ryan Schimpf would be playing 2nd base for the New Hampshire Fisher Cats, every year Ryan Schimpf would hit a couple of bombs and I would wonder why he was playing, every year, in the Eastern League. The organizational pigeon hole is a terrible place to be put and it seems that every organization refuses to use their eyes to judge a player after the original assessment is made.
Reply to oldbopper
oldbopper
On a similar vein, on Wednesday night two players, both of whom did not appear in a single game in organized ball in 2015 hit grand slams in the same game. Stephen Cardullo had spent several years in independent ball and I could not find where Andrew Toles spent his summer except that it wasn't in the minors. This is truly unbelievable.
Reply to oldbopper