Dozier was the Twins’ eighth-round draft pick in 2009 out of the University of Southern Mississippi, where he hit four home runs in 38 games as a senior and totaled 16 homers in 224 games overall. Baseball America’s pre-draft scouting report called him “more of a solid college shortstop than a big pro prospect” and Minnesota signed him for a measly $30,000 bonus. The picks directly before and after Dozier in the eighth round were both college players and they signed for $150,000 and $105,000, respectively.

He looked like organizational depth—a high-average, low-power college shortstop likely headed for second base or a utility role as a pro, which is a pretty common player type. In his first full season Dozier started the year at low Single-A and ended it at high Single-A, hitting just .275/.350/.349 with five homers in 127 games. His college strike-zone control had carried over, as he totaled more walks (60) than strikeouts (57), but Dozier managed just 25 extra-base hits in 580 plate appearances despite being a 23-year-old at Single-A.

In his second full season the Twins had Dozier repeat high Single-A at age 24 and after playing 94 games there the previous season, which is a sure sign they viewed him more as a minor leaguer than as a prospect. Dozier did what 24-year-olds repeating Single-A should do and hit .322/.423/.472, but even that included just two homers in 49 games. Promoted to Double-A around midseason, he hit .318/.384/.502 and showed a little pop for the first time with seven homers in 78 games.

Dozier began his third full season at Triple-A and struggled, hitting .232/.286/.337 with two homers and a poor 34/14 K/BB ratio in 48 games. However, when the Twins opted to replace 38-year-old Jamey Carroll at shortstop they called up Dozier for his MLB debut. He played shortstop nearly every day for three months, but looked stretched defensively and hit .234/.271/.332 in 84 games. He was demoted back to Triple-A in August so that the Twins could use Pedro Florimon at shortstop and Dozier didn’t return in September.

In the spring of 2013 the Twins shifted Dozier to second base full time and handed him the Opening Day job, but it was the same story as he hit .223/.278/.314 with three homers through mid-June. At that point Dozier was 26 years old with a .409 slugging percentage in 365 games as a minor leaguer and a .325 slugging percentage in 138 games as a major leaguer, including a total of 25 home runs in nearly 2,200 plate appearances as a pro. And then, almost overnight, he became a slugger.

In a five-game stretch from June 16-21 he homered four times, nearly equaling his career total of five homers in 102 previous games for the Twins. Dozier kept rolling from there, smacking 15 homers—plus 29 doubles—in 93 games from mid-June through the end of the year, which was good for a .254/.329/.465 line that looked totally out of place within the rest of his career. No second baseman in Twins history had ever topped 14 homers in a season—Dozier hit 15 in three-plus months.

And then he completed the shocking transformation from low-power, high-contact utility man to homer-slugging, walk-drawing, hard-swinging second baseman in 2014 by hitting .242 with 23 homers, 89 walks, and 129 strikeouts in 156 games. Dozier, whom Baseball America described in 2012 as having a chance to be the next Jamey Carroll, now looked more like the next Dan Uggla, turning into a Three True Outcomes monster rarely seen in the middle infield.

Pitchers had seemingly learned their lesson about Dozier’s newfound ability to crush high fastballs and in transforming into a dead-pull slugger he had seemingly lost his ability to make adjustments. Over an 11-month, 127-game span from July 1, 2015 through May 31, 2016 he hit .205/.282/.354. It got so bad that the Twins moved Dozier to the bottom third of the lineup and even benched him for several games, as local media criticism mounted due to a perceived stubbornness when asked to change his pull-heavy approach.

For his part, Dozier remained calm. By late May he had surely seen the strongly-worded newspaper columns, and was being asked every day to explain why he’d stopped hitting and why he was resisting a change in approach. Dozier downplayed the idea that a focus on opposite-field hitting would cure his nearly year-long ills, saying: “The results will come. It’s not about shooting singles the other way. It’s a lot more than that, so I’ve got to make adjustments.”

It’s tempting to assume that Dozier’s rediscovered excellence coincided with a change in approach, and anyone watching the Twins’ television broadcast has heard endless theories involving his supposed recent willingness to use the opposite field. Don’t believe it. Sure, it’s possible Dozier has recently been more open to advice about using the opposite field and it might even be something he’s been focused on doing, but as his spray chart since June 1 shows quite clearly he hasn’t actually done it. 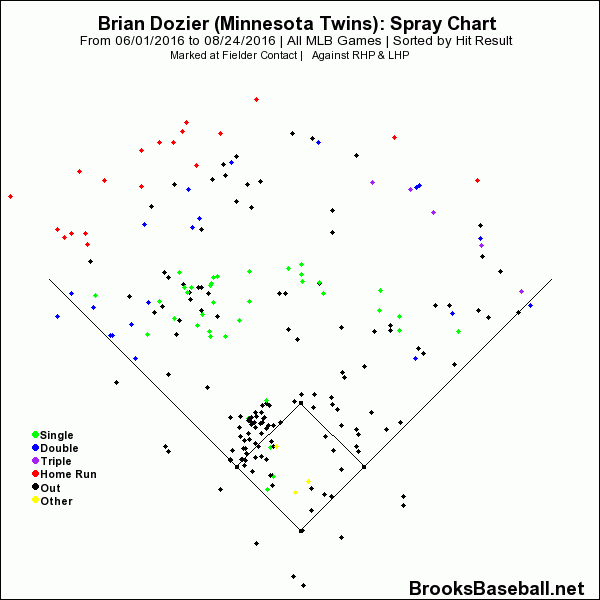 Those gorgeous red dots are the homers and all but two of them were deposited on the pull side of center field. In the past 30 days he’s pulled 62 percent of batted balls, which is the second-most in baseball and above his career rate of 51 percent. Dozier has been crushing pitchers for the past three months roughly the same way he emerged in 2013 as baseball’s most unlikely slugger: He takes huge, upper-cut, pull-heavy, bad-intentioned swings and in particular makes pitchers pay for leaving anything up in the zone.

I'm been enjoying the run but always fearful the switch would go off again.

What do his fielding stats suggest about that side of the ball?

I hope he can finish this year in the groove. What a year.

thanks for a great article on an under-appreciated player.
Reply to jfmoguls
LlarryA
Brian Dozier is actually two people, one in this universe, one in a loosely-connected parallel universe. One can hit, the other can't. From time to time, they trade places.

In a more reality-based vein, I have a theory about hitters like Uggla (and now, apparently, Dozier), that there are guys whose skills match up better with higher-level pitching, where the ball is more likely to be closer to its target, than with lower-level, low command pitching. Question is, does this player truly exist, and is there some way to spot him in the minors? Could it be as simple as looking for the guy who gets the only hits when the opponents are pitching well, and goes 0-for when the rest of his teammates are piling it on?
Reply to LlarryA
BeplerP
Outstanding. Thank you.
Reply to BeplerP