On Wednesday night, this image created a small Twitter sensation. Mind you, it was a small sensation. On a night that featured noteworthy pitching performances ranging from Yu Darvish’s injury to Jameson Taillon successful debut to James Shields to Snoop Dogg, there wasn’t room for a large sensation. But this screenshot during the Houston broadcast (in a game in which the Astros actually beat the Rangers in Arlington!) caused some of us to drop our slide rules in amazement: 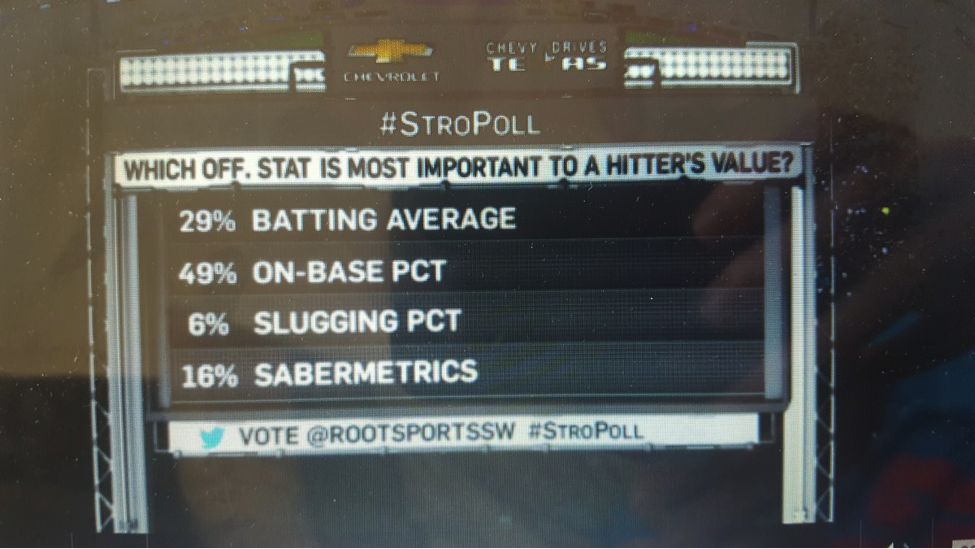 The two most obvious reactions were:

1. Wow, people actually are starting to realize that batting average isn’t all it’s cracked up to be!

2. What in the world is a “sabermetrics?” (Rob Neyer hypothesized that it was shorthand for WAR, which probably wouldn’t have looked good on a Twitter poll anyway. If that’s the case, we should thank the Root Sports program director for sparing us the inevitable Edwin Starr references.)

Here’s a third reaction: They got it wrong. On-base percentage isn’t the “most important to a hitter’s value,” even among these options. Slugging percentage is.

I think there are two reasons for on-base percentage’s popularity. First, of course, is Moneyball. Michael Lewis demonstrated how there was a market inefficiency in valuing players with good on-base skills in 2002. The second reason is that it makes intuitive sense. You got on base, you mess with the pitcher’s windup and the fielders’ alignment, and good things can happen, scoring-wise.

To check, I looked at every team from 1913 through 2015—the entire Retrosheet era, encompassing 2,214 team-seasons. I calculated the correlation coefficient between each team’s on-base percentage and its runs per game. And, it turns out, it’s pretty high—0.890. That means, roughly, that you can explain nearly 80 percent of a team’s scoring by looking at its on-base percentage. (Square the correlation coefficient, r, and you get r2, the percentage of variation explained by a linear model.) Slugging percentage is close behind, at 0.867. Batting average, unsurprisingly, is worse (0.812), while OPS, also unsurprisingly, is better (0.944). TAv would undoubtedly be better still.

Let me show that graphically. I calculated the correlation coefficient between slugging percentage and scoring (i.e., runs per game), minus the correlation coefficient between on-base percentage and scoring. A positive number means that slugging percentage did a better job of explaining scoring, and a negative number means that on-base percentage did better. I looked at three-year periods (to smooth out the data) from 1913 to 2015, so on the graph below, the label 1915 represents the years 1913-1915. 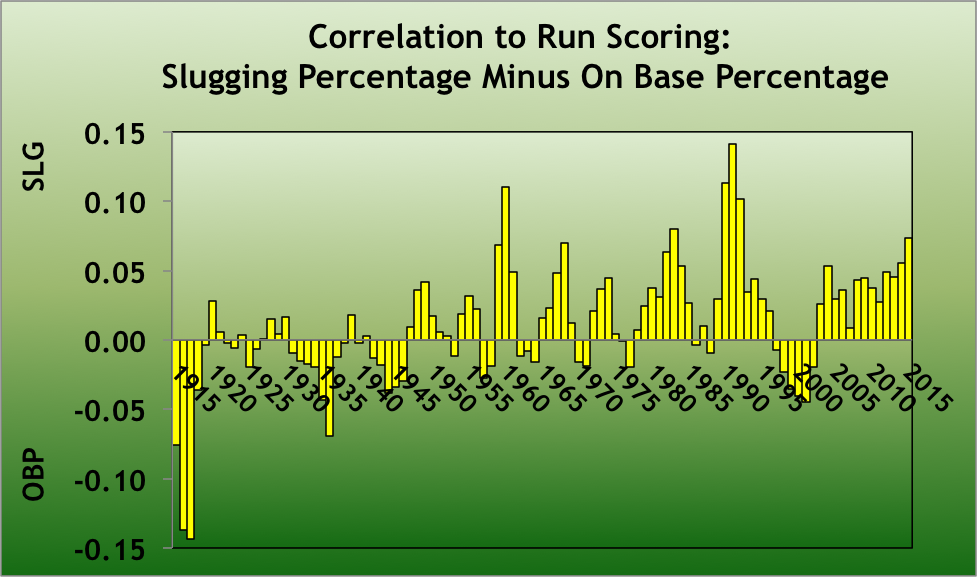 · The Deadball years were extreme outliers. There were dilution-of-talent issues in 1914 and 1915, when the Federal League operated. World War I thinned rosters and shortened the season in 1918 and 1919. And nobody hit home runs back then. The Giants led the majors with 39 home runs in 1917. Three Blue Jays matched or beat that number last year.

· Since World War II, slugging percentage has been, pretty clearly, the more important driver of offense. Beginning with 1946-1948, there have been 68 three-year spans, and in only 19 of them (28 percent) did on-base percentage do a better job of explaining run scoring than slugging percentage.

Why is this? The graph isn’t random; there are somewhat distinct periods during which either on-base percentage or slugging percentage is better correlated to scoring. What’s going on in those periods?

To try to answer that question, I ran another set of correlations, comparing the slugging percentage minus on-base percentage correlations to various per-game measures: runs, hits, home runs, doubles, triples, etc. Nothing really correlates all that well. I tossed out the five clear outliers on the left side of the graph (1913-15, 1914-16, 1915-17, 1916-18, 1917-19), and the best correlations I got were still less than 0.40. Here’s runs per game, with a correlation coefficient of -0.35. The negative correlation means that the more runs scored per game, the more on-base percentage, rather than slugging percentage, correlates to scoring. 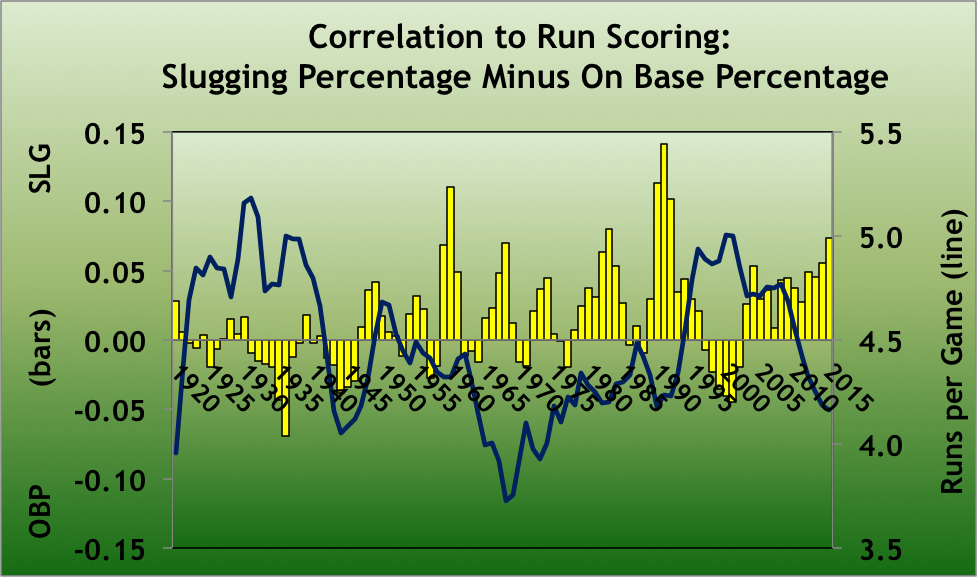 That makes sense, I suppose. When there are a lot runs being scored—the 1930s, the Steroid Era—all you need to do is get guys on base, because the batters behind them stand a good chance of driving them in. When runs are harder to come by—Deadball II, or the current game—it’s harder to bring around a runner to score without the longball. Again, this isn’t a really strong relationship, but you can kind of see it.

So respondents to the StroPoll: Good job realizing that batting average isn’t the most important single offensive statistic! You’ve moved beyond 20th Century thinking. Now it’s time to move beyond turn-of-the-millennium as well. On-base percentage is a really useful statistic. But if you want to predict run scoring, look at slugging percentage first.

You need to be logged in to comment. Login or Subscribe
bhacking
If you guys could get Pat Tabler and Buck Martinez to read this article it would make watching Jays games on TV a little less painful. Those guys are stuck in the 1970's.
Reply to bhacking
mainsr
bhacking, I there is no team for which I appreciate the ability to listen to the radio broadcast while watching games on mlb.tv more than the Blue Jays. I really like your radio crew.
Reply to mainsr
jrmayne
This isn't the right way to go about this, I think.

I can get awesome correlations for (say) organic food availability vs. autism diagnoses. The question is what the best combination of slugging and on-base matches the runs scored.

There are a couple of ways to do this. One is to go to a multiplicative method - which is how baseball works. Run scoring is (very roughly) OBP x Slugging.

Another is to look at a linear weights for each season.

This page: http://www.fangraphs.com/library/principles/linear-weights/ has linear weights relative to outs. Additional bases from a single/double/triple/homer range from 0.27 runs to 0.38 runs.

Simple calculation: I get a double and a single, you get a homer and an out. That's 1.000/1.500 for me, .500/2.000 for you. wOBA or linear weights are going to give me a higher expectation, despite the fact you got a homer, and homers are good (upgrading a triple to a homer is better than upgrading a double to a triple by a fair amount.)

If your finding is correct, it defies effectively all prior research on the subject. (A walk is better than an extra base.) This does not mean you are wrong, but I believe everyone else is right and you are mistaken. Correlation does indeed imply causation, but only loosely.

If I'm wrong on this, I hope someone corrects me. It seems to me that regression analysis is much stronger than simple correlation coefficients. Also if I'm wrong, you're the first author I've seen to point this out, so congrats.

But I'm tentatively putting this in the interestingly-mistaken bin.

Reply to jrmayne
mainsr
Let me break down my response. I like lists.

1. Yes, of course, correlation isn't causation. But when we're talking about measures of offense like OBP, BA, SLG, OPS, TAv, etc., I don't have any problem assigning causation.

2. This came up in Twitter yesterday--you are absolutely correct that OBP, SLG, and BA are inferior to more complex measures ("Sabermetrics") like OPS, TAv, wOBA, or OBP x SLG. No question, given the choice of SLG or the latter four metrics, SLG loses. My point here is that of the calculable-by-hand measures of BA, OBP, and SLG, SLG's the best, not OBP, at describing run production.

3. Closely related, the two sentences you cite are correct. The reason OBP has a higher correlation to run scoring in the 1913-2015 period but SLG wins in the 1939-2015 (and 1940-2015, and 1941-2015, etc.) period is because of the left side of the first graph. There have been seven three-year periods during which the correlation of OBP to runs exceeded that of SLG to runs by .04 or more: 2000-2001, 1935-1936, and 1915-17 (I'm using the ending date of each three-year period) and if I raise the threshold to .05 I'm left with four three-year periods, all prior to WWII, with by far the most extreme events occurring in the earliest years, and those affect the long-term averages. I'd argue that this illustrates a change in the game pre- and post-WWII, which of course didn't happen all at once, but stands out given the left side of the graph. I assume that if I were to use the pre-Retrosheet years the correlations around the turn of the century would exhibit similar characteristics.

4. Ye gods, I'm not suggesting I'm right and everybody else is wrong. I am suggesting that in contemporary baseball, SLG is better correlated to runs than OBP on the team level, and thus is a more descriptive stat. But that's fluid; get offensive going again, and the difference could well disappear. I assume we can all agree that BA doesn't cut it. I'm saying that in the absence of BA, if you want a calculable-by-hand offensive stat, SLG beats OBP. But the difference isn't as great as the difference between either and BA, and there are considerably better measures available. But the #StroPoll didn't list them as choices.

Thanks for reading this whole comment if you made it this far!
Reply to mainsr