The Wednesday Takeaway
It was a typical pitcher’s duel for the first six innings between the Mets and the Marlins. Kevin Plawecki broke the draw in the seventh when he slapped a single past Miami’s drawn-in infield to score two runs. The Marlins responded by pushing across a run in the top of the eighth inning, but that was all Miami would get for the day, as Terry Collins brought in closer Jeurys Familia to face Giancarlo Stanton with a man on and one out in the eighth inning. Familia got Stanton, and then a 1-2-3 inning in the ninth to finish off the Marlins and give New York their third victory of the young season.

There’s nothing particularly spectacular about the events that happened at Citi Field yesterday afternoon—Better Team Wins Game; Closer Gets Save! is about a 12-point headline—but one thing that is interesting is the Mets’ calling on Familia for a multi-inning save this early in the season. This week at BP, we have chronicled two twists on closer usage that are changing the way the best man in the 'pen is used: In the rare occasions when Atlanta’s in a position to win, the Braves have decided that they’ll hand the ball to Arodys Vizcaino to face the top end of lineups, regardless of which late inning that occurs; while using Jason Grilli to face the bottom half of the order—a direct assault on the traditional save-chasing nature of the role. Meanwhile, in Houston, the Astros are using Ken Giles in “a more versatile role,” which is to say that he’s being used as a set-up man instead of a closer—even though four out of five dentists would agree that he's the best reliever on the staff, and he has recent closer experience/success. Teams are slowly but surely starting to move away from the traditional usage of closers, and Familia’s relatively typical appearance on Wednesday afternoon is a small data point supporting the third leg of this stool.

The following chart shows how many saves of four outs or more major-league managers have squeezed out of their closers each year since 2000: 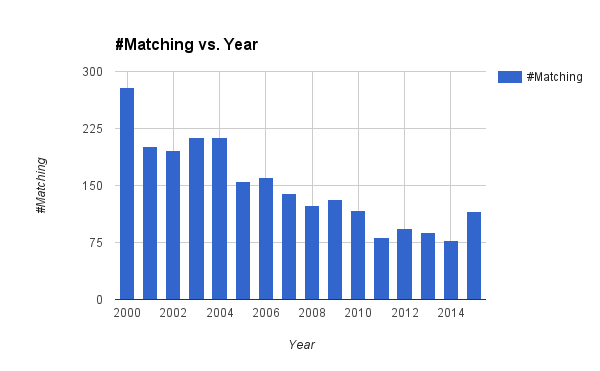 While Goose Goosages were long gone by the turn of the millennium, the relatively rare multi-inning save still managed to get relatively rarer, and rarer, and rarer, up until 2014. That year, just 77 saves met the four-outs-or-more description, the lowest in the saves era and the fourth straight year in double-digits. Then, last year, the train started moving back uphill, and not by a little: The 116 multi-inning saves reached the levels of five years earlier, and it happened overnight, with a 51 percent increase over the previous season.

Terry Collins was part of the reason. Familia had five four-out-(or-more) saves last year, the third most in baseball, and a couple more blown saves in games he entered in the eighth. And in the postseason Familia was entering in the eighth almost by default.

But that's October. This was April 13th, against the Marlins. Maybe this is an indication that the Mets think the Marlins are more formidable than PECOTA does, or maybe they were treating the game as extra important in snapping the Mets out of their early funk, or maybe it's an indication that Terry Collins is going to be just as aggressive about bringing Familia in early this year as he was last year, in Familia's first year as closer.

Either way, it was the right move. Giancarlo Stanton is always a threat to change the complexion of a game with his power, so if that's not the time to have your best pitcher in the game, when is?

For five innings, the Pirates were able to hold the Tigers at bay. Ryan Vogelsong pitched 5 1/3 innings and struck out five over that span, and only gave up one run. Arquimedes Caminero entered the game in relief for the sixth inning, and as you can see by the chart below, things didn’t go well for Caminero in his appearance. 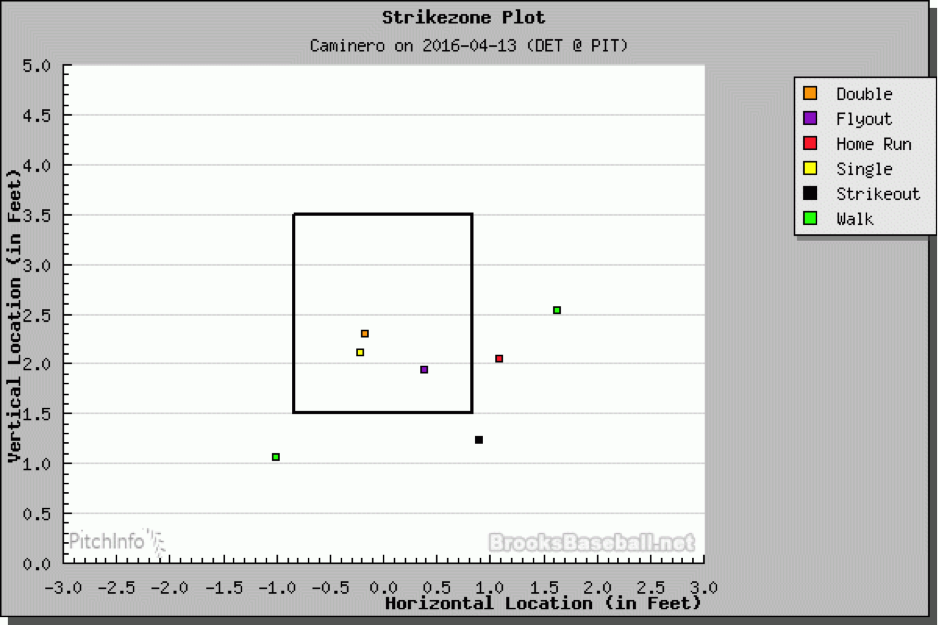 The home run to Jarrod Saltalamacchia was a particularly painful one, because there sure were a lot of other Tigers on base when it happened.

Saltalamacchia’s 100th career home run and fourth career grand slam put the Tigers in the lead for good, as a 2-1 deficit became a 5-2 lead in the blink of an eye.

The Giants and Rockies delivered a good old-fashioned Coors Field slugfest—the 10-6 score was the fifth such final in a game between these two teams, as a matter of fact. The two teams combined for three homers, eight doubles, and four triples. All four triples came from Colorado, including two from—you guessed it—Trevor Story, who is apparently doing that now. After an 0-for-4 (with three Ks) on Monday, he went 3-for-4 with a sac fly. The triples give him the league lead in both homers and triples now, though the latter would likely not have been true if he'd hit the triples last year: The new, higher walls kept both balls in the park and robbed Story of a couple more homers to add to his already torrid start.

One Rockie who didn’t get robbed by the new Coors Field dimensions was Nolan Arenado, who decided to just go ahead and hit a couple of no-doubters. His second homer of the night was the one that broke the game open for Colorado.

Baltimore’s seven-game unbeaten run came to an end on Wednesday night, as the Red Sox put an end to the Orioles’ season-opening winning streak. (The good news for Baltimore is that bad teams don't start 7-0.) In game one of this series, Chris Davis had stung Craig Kimbrel with a game-winning moonshot to deep center field.

Kimbrel returned to the mound last night and decided that the best course of action to make up for Monday’s incident would be to make sure that the O’s didn’t put a ball in play. Kimbrel struck out the side to nail down the victory for Boston, and also got revenge on Chris Davis by making him chase a nasty 90-mph knuckle curve that ended up in the dirt.

It’s never really fun to face off against Craig Kimbrel, and this had to be one of those nights where it was even less fun than usual. 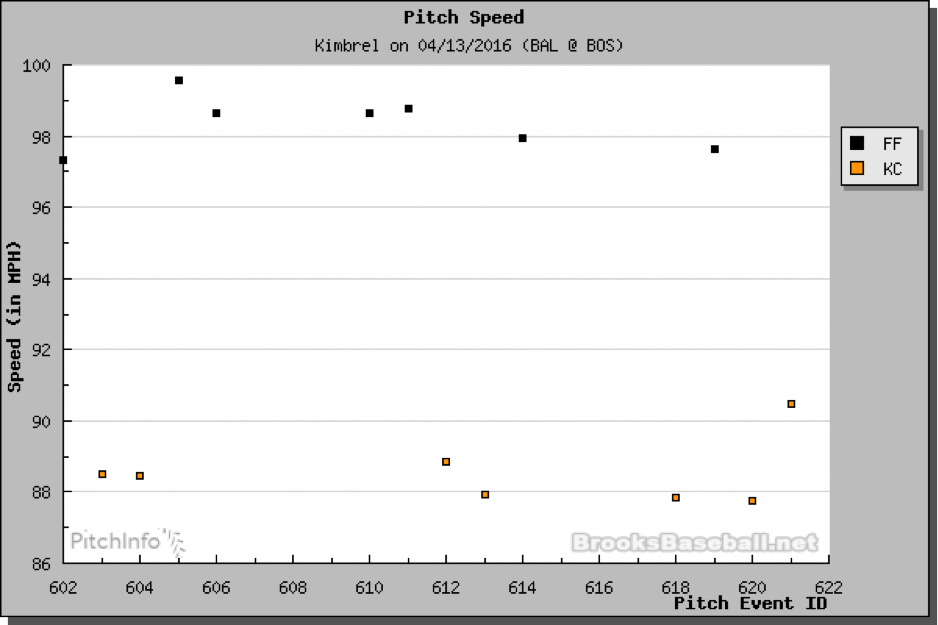 Kole Calhoun had a lovely day against the Oakland A’s, with a couple run-scoring hits with two outs. He rounded it off with by covering plenty of ground to make a tough sliding catch in foul territory.

Chris Archer will be looking for a bounce-back start when the Rays take on Cleveland. He was victimized by the Orioles during their undefeated streak, and he’s only made it through five innings in each of his first two starts this season. However, he might have an easier time dealing with Cleveland's offense—which he’ll be seeing for the first time since September 2014, when he pitched into the eighth in his final start of the season. Since that start, Archer became an ace, and he'll be looking to show that the description is as true in 2016 as it was last year.

But if that’s not enough for you, then there’s always the allure of catwalk shenanigans at Tropicana Field. Francisco Lindor can tell you all about it after the experience he had on Wednesday.

You need to be logged in to comment. Login or Subscribe
LlarryA
The game is Too Damn Easy for Trevor Story right now. The first week, it was home runs. This week it's triples. Next week he's going to hit every ball off the left-field foul pole. Maybe the week after that it will be bunt singles that roll to a stop on the 85th blade of grass along down the line...
Reply to LlarryA
morillos
I'm always hoping that Caminero will pitch well, if only because who better than someone named Arquimedes to pitch in high leverage situations? It's meant to be!
Reply to morillos