Over the past two seasons, fans of the Kansas City baseball club have become acquainted with the supernatural wonder known as “Royals Devil Magic.” The simplest explanation of this phenomena is it occurs when you take your sabermetric dogma, crumple it up into a tiny ball, and set it on fire with a flamethrower.

On September 12, 2014, in the thick of their first playoff race in 29 years, the Royals dropped a 4-2 decision to the Boston Red Sox. At that moment, they had won just two of their previous six games and were on the outside of the postseason scrum, a half-game behind the Seattle Mariners for the final AL Wild Card spot. Despite a reputation for panicking, by this point manager Ned Yost employed an almost Zen-like quality in the dugout, throwing his trust entirely behind his club. Still, Yost felt the need to do something to snap the Royals out of their inopportune mini-slumber. Whether it came to him in a dream, or it was whispered to him when he visited the Crossroads, in the next game Yost pencilled Alcides Escobar into the leadoff spot. At that point in the 2014 season, Escobar was hitting .274/.305/.363. His career OBP was under .300. A leadoff hitter? The only person who thought this a good idea was Yost.

Over the final 15 games of the regular season, Escobar hit .375/.412/.484 atop the Royals lineup. Kansas City won nine, pushing aside the Mariners and surging ahead of the A’s to host the Wild Card at Kauffman Stadium. You know how that turned out. With the lineup riddle apparently solved, Escobar continued to hit leadoff for the remainder of the postseason. His offensive production returned to normal Escobarian levels (he hit .292/.303/.415 in 15 games), but the Royals still rolled all the way to the seventh game of the World Series. Royals Devil Magic indeed.

Yost and the Royals doubled down on their lineup in 2015. Instead of waiting until September to move his out-making machine to the top of the order, Escobar hit leadoff from day one. His OBP was a heinous .293, 24 points lower than his 2014 mark and five points off his career average. Yet the Royals were one of the top offenses in baseball, plating 4.47 runs per game while winning an American League-best 95 games. Ask a Royals fan what they remember about Escobar hitting at the top of the order and they will relate a phenomenon known as Peak Escobar. Peak Escobar happens when the Royals leadoff man elevates to a higher state of offensive consciousness, swinging at the first pitch of the game and ultimately reaching base. Escobar offered at the first pitch he saw in 13 of 16 games, obtaining Peak Escobar status eight times. The pinnacle came in Game One of the World Series, when the Mets misplaced their advanced scouting report and Matt Harvey served an ill-advised fastball middle-middle.

Note from the above clip the discussion from both the national and local announcers regarding Peak Escobar. They may be unaware of the name. They are, however, aware of its existence.

By nearly every statistical measure, Escobar is a deficient offensive performer. In six full major-league seasons, he owns a career .233 TAv. He has posted an OBP greater than .300 in just two of those seasons. Yet he has one skill the Royals unequivocally value: The ability to guide the bat through (and around) the plane of the strike zone to connect with the baseball and put it in play. You see, Escobar makes contact. Lots of contact. In 2015, Escobar introduced his bat to the ball 553 times, the second most batted balls in the majors. (Jose Altuve set the pace with 580 balls in play.)

On the Royals, Escobar is not an exception. He’s the norm. When it comes to batted balls, the Royals have six of the top 57 hitters in baseball as defined by the raw number. This is not something new. As a team, the Royals have been putting the ball in play more than any other club in the majors the last five years. As contact rates and the raw total of batted balls have declined leaguewide, the Royals have insisted on swimming against the tide, leading the majors in balls put in play in four of the last six seasons. The years the Royals failed to finish atop the leaderboard they finished second in 2011 to the Texas Rangers and somehow dropped all the way to fifth in 2013.

In fact, making contact and putting balls in play has become a hallmark of the Dayton Moore Royals. For the first three full seasons into Moore’s reign, the Royals were roughly league average. Beginning in 2010, they have been otherworldly. 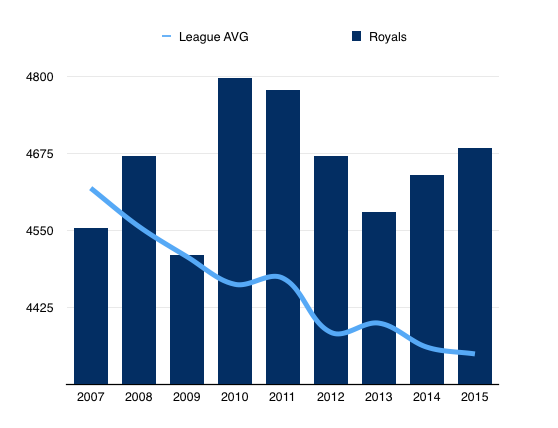 To achieve such a lofty total of batted balls, the Royals have stocked their lineup with players who possess high contact rates. This was their normal October lineup, presented with their 2015 regular season contact rates.

In 2015, the league-average player had a contact rate of 76.8 percent. Of the regular nine above, the Royals had just one player who finished with a contact rate below the league average. It happened to be Alex Gordon, the one guy with a strikeout rate north of 20 percent and a walk rate over 10 percent.

Such a contact-heavy approach places continual pressure on the defense. We witnessed this in Game Four of the ALDS when the Royals, trailing by four runs in the eighth inning, stoked the coal on the singles train and strung together five consecutive basehits. The sixth batter of the inning, Kendrys Morales, likewise put the ball in play. It was a groundball that had double play written all over it, but this one had just enough awkward spin that it skimmed over the glove of Carlos Correa, allowing the Royals to tie the game. Not even Rookies of the Year are immune from Royals Devil Magic.

It also serves to neutralize power pitching. Pitchers are throwing harder and are missing more bats, but the Royals don’t give a damn for your trends. Three times in the last five years, the Royals have finished with the lowest strikeout rate in the league. Last year, the race for the basement wasn’t even close.

The Royals refuse to get themselves out. They dare the opposition to make a play. From the lineup above, the 2016 Royals return seven of the nine, keeping the core of the order intact and the pressure on the rest of baseball. PECOTA may project 76 wins. The batted balls activating Royals Devil Magic will argue otherwise.

You need to be logged in to comment. Login or Subscribe
eas9898
Well done article illustrating the power (hah) of the contact hitter.
Reply to eas9898
LlarryA
I'm coming around to the idea that while we have math (#Gory and otherwise) showing that patience is generally a good thing, that there is a point at which Extreme Contact (tm) becomes a good thing. The Royals seem to have found that line and boldly stepped across it, but until you reach the line, the results get worse and worse first. To paraphrase Mr. Miyagi: "You Patience do, okay; you Patience not do, okay; You Patience "guess so", squish, just like grape."
Reply to LlarryA
BeplerP
I suggest, perhaps without fully appreciating the problems involved in doing so, that your analysis is intriguing but leaves a lot on the table, and that we need to see a fully-fledged, all banners flying, statistical analysis of the OBP team vs. the CONTACT_Rt team. Is Kansas City right? They have amassed a fair amount of evidence over the last few years to that effect. Are we playing around with serious questions about the efficacy of OBP? Yes, its a question that is ripe for consideration. At least, I think so. Regards,
Reply to BeplerP
cbrown1970
Agree. There is much more room for research into this, and the thought did cross my mind while writing. But then it would go much deeper than an intended season preview article. I'm sure it will be explored in the near future.
Reply to cbrown1970
andykaylor
This is a really intriguing article. To the extent that sabermetrics wants to be a real science, it needs to find new explanations for results that don't match predicted patterns. You can only fall back on the "regression to the mean" mantra so many times before you need to actually look at what happened. I remember reading an article on this site a few years ago that used defensive shifts or lack thereof to explain the apparent phenomenon of Ryan Howard being a "clutch" hitter. That's the kind of thing that I love to read. This article has the feel of a good hunch for possibly explaining why what shouldn't be happening is continuing to happen, though the "pressure on the defense" part sounds a bit like an old school intangible kind of explanation. Or do you think that there might be a genuine correlation between sustained high contact rate and diminished opponents defensive efficiency? At first glance it sounds like a gambler's fallacy, but I guess at some point even mathematical model have to account for there being actual humans on the field. I'd love to read more analysis of that aspect.
Reply to andykaylor
cbrown1970
Thanks. The "pressure on defense" was just my way of saying the Royals force their opponents to make the play. Because the SOr is around 15 percent, they don't get themselves out as much as other teams. There is an old school saying that when you put the ball in play, good things can happen. Like the Correa error. This is truly one of those articles where I realized while I was writing it could be spun into several more in-depth pieces.
Reply to cbrown1970
okteds
I'd be curious to know, in reference to the concept of defense fatigue, did opponents see a decline in fielding % when facing the Royals?
Reply to okteds
onegameref
Does reaching base via error count towards OBP? If the Royals still reach base less often than the other teams employing a less contact friendly approach, then it seems to me the OBP approach still has merit. I know that Escobar was death to Jake Peavy when he was on the Sox. I guess Peavy was grooving first pitches back then since his stuff was waning. It seemed like his only HRs came off of Peavy.
Reply to onegameref
nberlove
Reaching on error is not counted in OBP. Escobar reached on error 7 times last season. If we count those, his OBP goes from .293 to .304.
Reply to nberlove