On Sunday, Darren Rovell tweeted a handful of pages from the free agent binder that Scott Boras put together for a 25-year-old Alex Rodriguez. As most of us around here tend to be projections junkies, surely you’ll find this page particularly interesting: 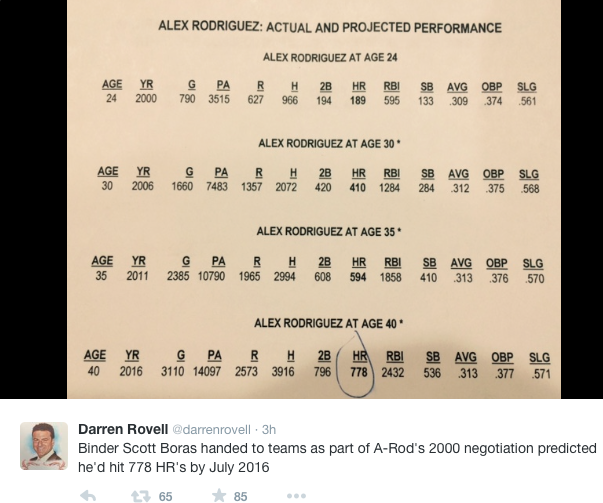 Fascinating that Scott Boras had his own advanced projection system, three years before Nate Silver debuted PECOTA here at BP. More impressive, Boras' system not only projects a few years into the future, but 16 years into the future. Most impressive of all: Look at those numbers! Why, Rodriguez would not only break the all-time home run record, but the doubles record, too! And RBIs. And runs. And be within range of the Hit King, too.

I figured I’d reverse engineer this projection system and see if I could figure out what it was based on.

1. How did he project Rodriguez to hit 184 home runs from ages 36 to 40?
Only one player has ever hit at least 184 home runs from 36 to 40, and that’s Barry Bonds, which means that when this projection came out nobody in history had ever hit at least 184 home runs from 36 to 40. How did Boras’ projections come up with this? I used some really, really complicated mathparts to figure this out, and the answer is: That’s how many Boras had projected for Rodriguez to hit from ages 31 to 35. So they just carried that exact same rate forward to his late 30s. I can buy it.

This same principle applies to Rodriguez’ stolen bases. The projection calls for 126 from 36 to 40, which, at the time, would have been the sixth-most in history. Just took the 31-35 rate and carried it forward. I’m buying all of this.

2. How did he project Rodriguez to hit 184 home runs (and steal 126 bases) from ages 31 to 35?
Now, see, this is where it gets complicated. Follow me, if you would: 184 home runs, and 126 stolen bases, are how many Boras projected for Rodriguez from ages 26 to 30. It’s hard to tell, because we don’t see ages 26 to 30 as a defined time period on these, but the six seasons from 25 to 30 average out to exactly the same number of games per season as the later five-year blocks, and exactly the same number of plate appearances, home runs, stolen bases, and everything else per game. So what Boras' projections figured Rodriguez would do during his peak years, Boras' projections assumed he would also do for the entirety of his 30s.

3. So where did those peak-year rates come from?
Okay, put your dinky scientific calculator away, son, because we’re dealing with the heavy stuff now. Those rates were exactly what Rodriguez had actually done in the previous five seasons. The projections took Rodriguez’ five-year totals, found the average games per season, average production per game, and… projected everything to stay exactly the same for the next 16 years. Remember, this is pre-Moneyball era, which means that GMs weren’t smart enough to do this themselves and needed a binder to do it for them. Even the binder had to come with gum in it or the GMs wouldn't bother opening it. “Math?” they would have said if you’d asked them to calculate these, “I can’t math,” and then they would have tried to pry a stuck piece of bread out of a plugged-in toaster with a metal knife. So Boras did it for them. The results were amazing! This guy Rodriguez is going to be really something!

(Note: My toaster/metal knife theory makes me suspect that the person who circled “778” under the home runs column was, in fact, Boras, making sure all those idiotic toaster-pickin' GMs noticed it.)

4. But wait, if these projections just take ARod’s numbers and replicates them year after year, how do the career slugging percentages keeping going up in his late 30s?
Because Boras was no fool; he removed Rodriguez’s lousy age-18 and age-19 statistics from the baseline before he started multiplying; therefore, his career slash line improves with every replicated year of projections. ARod would only exactly replicate his ages 20 to 24 seasons, see. Everybody knows that including his age-18 and age-19 seasons in a baseline that would then be replicated exactly for 16 seasons would be statistically irresponsible.

5. Why stop at 40?
I genuinely do not know why these tables stopped at age 40. Because I’m a math genius, I have calculated what we will refer to as the super secret “lost” ARod projections. His career totals:

Is it likely that Alex Rodriguez will keep playing well into his 50s and eventually break Rickey Henderson’s stolen bases record? It’s hard to believe he can, but I learned long ago that projections are smarter than people and that nothing is impossible for Alex Rodriguez, the only man in the future ever to hit 1,100 home runs and drive in 3,500 runs.

6. By this way of measuring things, couldn't we just declare that Jorge Soler is on pace to drive in 9,000 runs by the time he's 70?
Get real. Soler has not been in the majors long enough to establish a suitable baseline of performance. We had seven five years to determine exactly the level of hitter Rodriguez was.

That said, yes, you can use this method to project Kris Bryant’s next 20 years. Bryant is a historically unique player.

7. How’d these projections do?

Okay, that’s almost hauntingly close. There’s actually probably something to learn from this. I refuse to engage with what that something is, but something. Indeed, if Boras had cut his projections off at age 34—which would have taken Rodriguez to the end of his 10-year contract—he’d have nailed it, too:

The worst thing you can say is that he didn't steal quite so many bases, and he turned a ton of doubles into extra home runs.

And, really, if you think about it: Boras was only selling a team on those 10 years. Everything else was just a game—a toy, an amusement, something to look at and pop eyes at and then chuckle at the absurdity of. At worst a big ol' white lie, but not one that Boras was asking money for. So what’s the harm? The basic truth is this: Scott Boras walked into a bunch of GMs’ offices in the winter of 2000, he threw down a sheet of paper that said exactly what Alex Rodriguez was going to do over the next 10 years, and he was almost exactly right! So let’s quit being so cynical about this stuff. Scott Boras did two things that winter: He predicted the future; and, instead of keeping it to himself (or, worse, exaggerating it) he shared that knowledge with the world. And people say there’s no honor left in this world.

You need to be logged in to comment. Login or Subscribe
mblthd
Does he have sheets for Kendrys Morales and Stephen Drew?
Reply to mblthd
rogerb
I always wondered why teams would even accept a huge binder compiled by a player's agent. Wouldn't they tell him "we have our own evalutation/projections of player and don't need your obviously biased work?" Wouldn't they just talk money and not need to be told that ARod put up historically great numbers?

Reply to rogerb
matrueblood
I feel quite sure teams humor Boras, smile at him about the binder, pretend to leaf through it with fascination during the meeting in which they might receive itâ€”and then foist it onto an underpaid intern as busywork, never to be seen again by any executive.
Reply to matrueblood
bmmcmahon
I'm guessing Boras' office compiles binders like that more for the client than for the team. You have to have something to give the player that proves you're earning your percentage. "Alex, I want to show you what we're giving to teams to show them what you're worth. This is what we think you can do over the next 15 years. They will have to pay you through the nose!"
Reply to bmmcmahon
matrueblood
YUP.
Reply to matrueblood
pizzacutter
Ahem!
Reply to pizzacutter
beeker99
This post has the least amount of #GoryMath I have ever seen in a post that warned of #GoryMath.

If you will excuse me, I will now lament that "Miller" and "Carleton" are nowhere near being similar, such that I can't reasonably pull off a Goldman/Goldstein switcheroo joke, despite the situation otherwise being practically perfect for it. Sigh.
Reply to beeker99
comish4lif
I don't have it handy - but hasn't Bill James' BROCK2 projection system been around for a good long time?

Reply to comish4lif
onegameref
Can we see his projections for Oliver Perez? I think he pulled the wool over the eyes of the Mets on that one. I could never understand why the Yankees went out another 10 years on A-rod when they didn't have to but that's just me.
Reply to onegameref
SamVan
"pulled the wool over the eyes of Mets management"....that is, like, extremely not hard to do. (see also Bay, Jason; Castilo, Louis; and Madoff, Bernie)

In fairness, though, what was Boras supposed to do with Ollie's binder, just fill it with page after page that saying "He stinks!" in various fonts?...wouldn't be much of a super agent if he did that, now would he?
Reply to SamVan
jfranco77
Well, Sam, maybe you can't math. But Scott Boras? That guy can math.
Reply to jfranco77
abcjr2
"Sources said the baseball staff, including general manager Brian Sabean, believes Zito is worth the seven-year commitment because he is similar in style to Greg Maddux, who pitched exceptionally at age 35."

"Before Christmas, Sabean, managing general partner Peter Magowan and manager Bruce Bochy met with Zito in Los Angeles. A source close to Zito said the pitcher was impressed not only by the financial commitment Magowan promised to turn the Giants into a winner again, but also by Magowan's honesty in detailing the shortfalls of the organization and how Zito would become the cornerstone of the new Giants."