Brandon McCarthy had an interesting season in 2014. He began the year pitching for Arizona, and traditional stats—the 5.01 ERA—implied that he struggled. But his 3.82 FIP suggested his ERA wasn’t telling the whole story. Fast forward to McCarthy’s 90-inning tenure in New York, and analysts around baseball were coming up with explanations for why McCarthy was so improved. After all, he posted a 2.89 ERA in 14 starts while wearing pinstripes. McCarthy’s FIP with New York wasn’t all that much better than it was in the first half, though, as he posted a 3.22 FIP as a Yankee.

The interesting thing about McCarthy is that his peripherals suggest that some of these ups and downs are simply a function of factors beyond his control. After all, his FIPs over the past three seasons are 3.76, 3.75, and 3.55. Those are much more consistent than his ERAs over that same time period (which should surprise nobody), and they indicate that McCarthy is a pretty consistent pitcher, at least as far as the things he controls go.

There’s no doubt in my mind that McCarthy’s actual performance was improved with a repertoire overhaul in New York, but there’s a bigger change that could bode well for the veteran righty moving forward: His 2014 curveball was a completely different beast than his pre-’14 model.

In 2013, McCarthy was only able to get whiffs on 16 percent of the swings opposing hitters took against his curve. Last year, that number jumped to 26 percent. To put that in perspective: It was one-and-a-half standard deviations worse than average before; it's just about average now. So what changed in 2013 to make McCarthy’s curveball so different?

McCarthy has, over the course of his career, thrown his curveball harder each season. Essentially he’s been working up from a curveball that’s slightly below average in velocity to one that is now above average, as you can see in the image below: 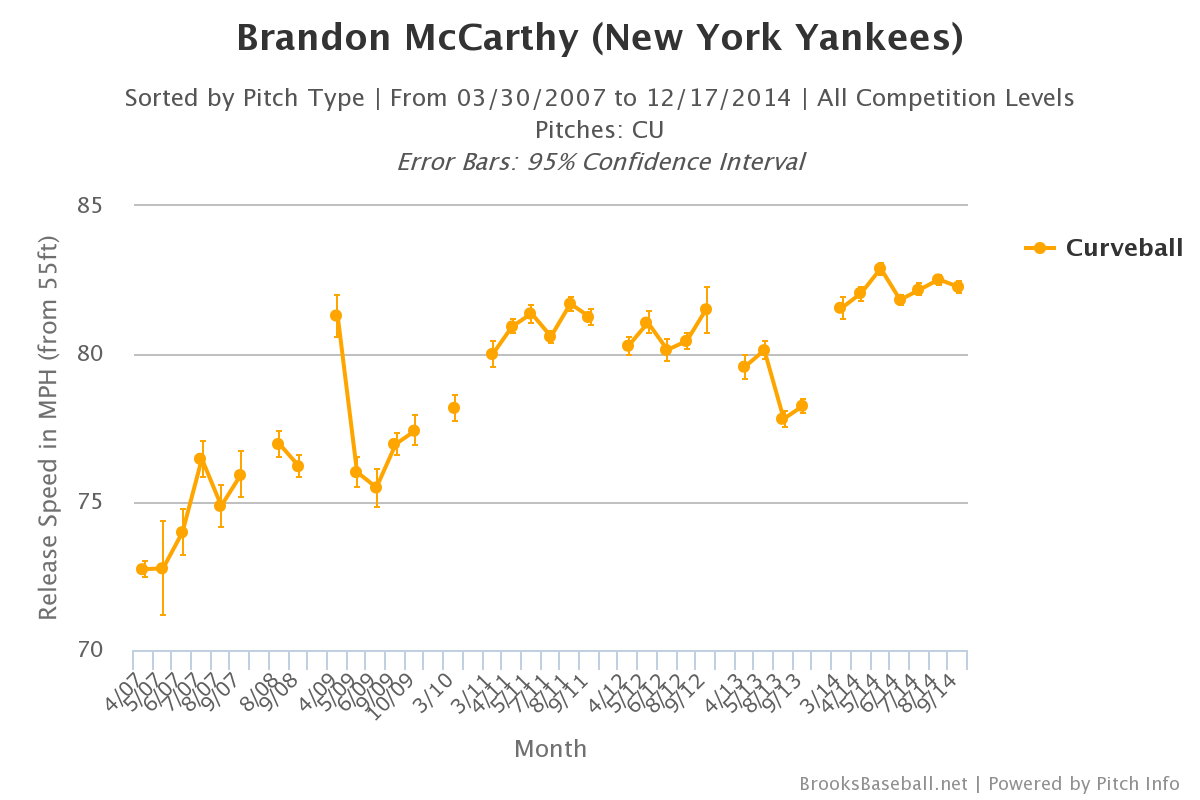 The one blip in McCarthy’s otherwise perfect velocity slope was 2013, when his curveball dropped below 80 mph for the first time since 2010. From 2013 to 2014 though, McCarthy added more than three ticks of velocity to his curve, posting the highest average curveball velocity of his career. As I mentioned in my column earlier this week, there’s research that suggests that curveball velocity is a primary component of overall pitch effectiveness. It was good that he recovered his 2012 velocity on the pitch last year; better still that he added to it, significantly.

McCarthy saw some changes in his movement profile as well, with his curveball becoming more of a 12-6 offering than an 11-5 curve. We can see how McCarthy compares to his peers using the same data visualization from earlier this week showing the change in curveball movement among MLB pitchers. Below is an image from that visualization highlighting McCarthy’s curve: 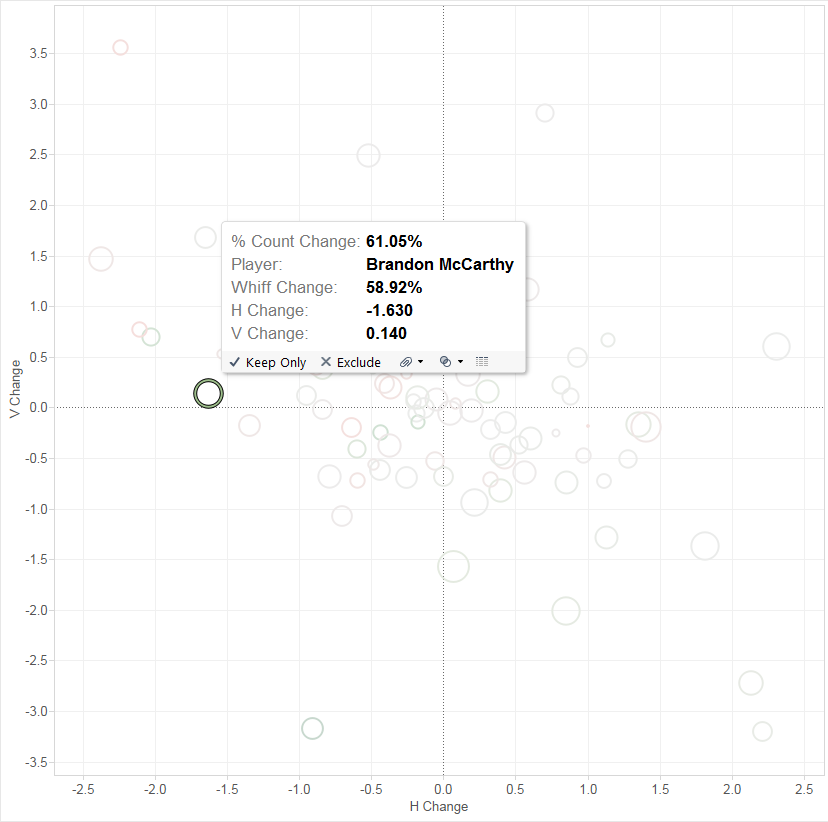 Clearly indicated on the chart is the uptick in whiff rate that I mentioned earlier, along with some other notes about McCarthy’s 2014 curveball. The pitch moved 1.6 inches less on the horizontal plane while essentially having the same vertical drop. He also threw 61 percent more curves in 2014 than he did the year before, perhaps indicating a newfound confidence in the pitch. While the year-over-year data suggests McCarthy’s curve is moving toward a 12-6 break, it still has five inches of horizontal break.

The sheer number of curveballs thrown by McCarthy is another factor that shouldn’t simply be glossed over, either. The 24 percent curveballs that he threw in ’14 marked a career high. McCarthy ditched the splitter that he dabbled with in 2013, but also picked up his four-seam usage, going with a more balanced approach compared to previous seasons. It’s reasonable to think that the struggles McCarthy had with his curve in 2013 led to him throwing fewer of them in favor of sinkers or cutters—pitches he might have had more confidence in.

Another change for McCarthy’s curveball is its location, as he’s worked to bounce the pitch more often in recent seasons. Over the past three seasons there is a distinct downward trend in the vertical location of McCarthy’s curve: 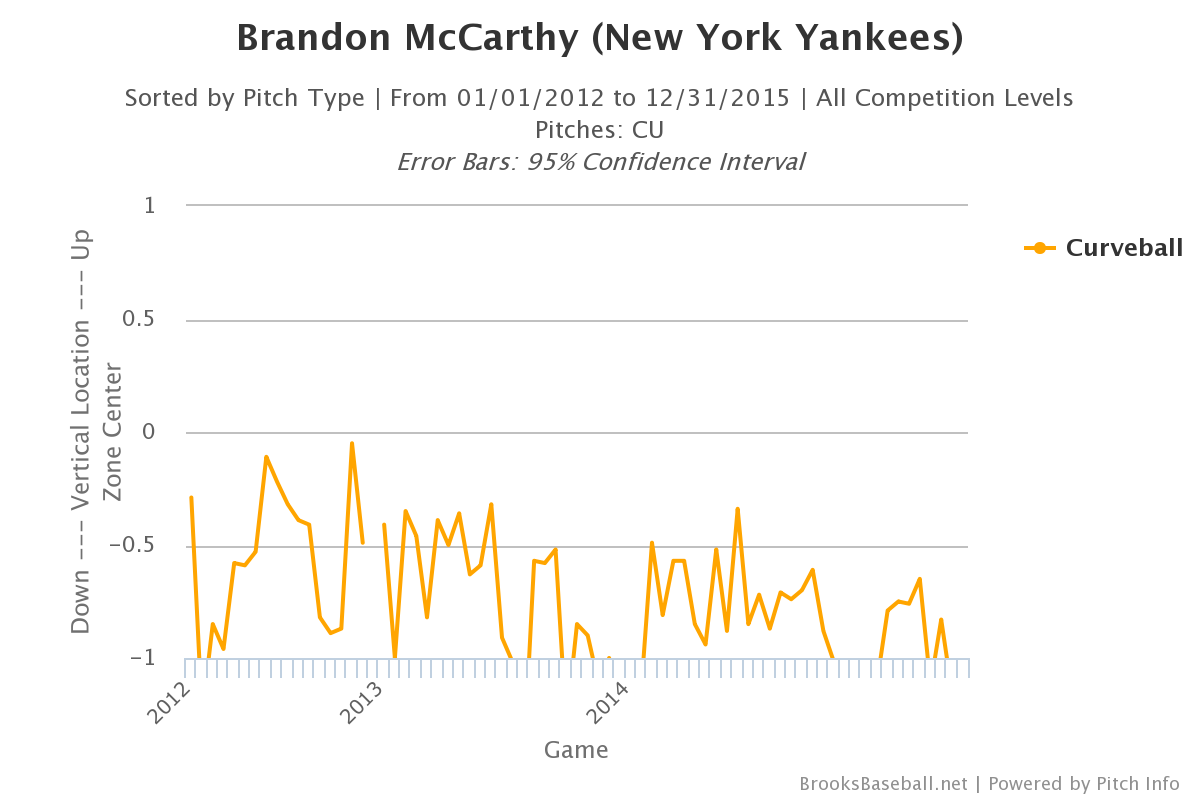 This trend coincides nicely with an emphasis on groundballs as McCarthy. In 2012 he posted a 40 percent groundball rate, with his curve generating roughly two groundballs for each fly. The following season his groundball rate jumped to 48 percent; last year, 53 percent, led by a curve that produced 3.2 grounders for every fly ball.

The Dodgers recently signed McCarthy to a four-year deal that will pay him $48 million to anchor the back end of a very talented rotation. Much will likely be made, in the LA media as well as nationally, about McCarthy’s cutter or sinker as a key to his success in Los Angeles. Those two pitches will undoubtedly be important, but the curve will be flying under the radar, much as it has for the past few seasons. McCarthy is known around baseball for reinventing himself (on top of his social proclivity and sabermetric inclinations), and the evolution of his curveball is but one piece of his career renaissance. It’s easy to look at one change, be it the curveball or the cutter or the sinker, and claim that thing is the key to his future performance. The reality is each of those developments is but one piece of the puzzle that makes up McCarthy’s performance.