I’ve recently written about the role and value of plate discipline in hitting. I concluded the last article with the takeaway that plate discipline, while undoubtedly important in hitting, was not fully separable from the other attributes of a hitter. In searching for a complete per-pitch way of evaluating hitters, we have to account for the entire package of skills, because all of the skills interact with each other. So we have to go back to basics.

Despite being athletically impossible, hitting is theoretically simple. Every hitter is confronted on every pitch with a choice: to swing, or to take. A take is valuable when the pitch is likely to be a ball; depending on the count, you can get a walk, or at least advance the count in a favorable direction. If you swing here, you both lose the benefit of the called ball, and also risk whiffing on the pitch or making weak contact. On the other hand, when the pitch is thrown over the middle of the plate and is thus likely to be called a strike, the better choice is to do your best to make contact. If you take, you get a strike, and lose the opportunity of a hittable pitch.

Framed in this way, the focal decision is to swing or not, and so that’s perhaps the information which is most useful in evaluating each hitter. In an economic framework, we can think of the marginal value of a hitter’s decision to swing or take, relative to the alternative (if they swung, what if they decided not to? If they decided not to, what might have happened if they had swung?). We can assign a value to each hitter on each pitch using the straightforward device of linear weights (as calculated by Harry Pavlidis). We then subtract this value according to what might have happened if they made the opposite choice.

I think it helps to walk through how we could score a hitter, which we can divide into two cases, depending on whether the hitter took a cut or held back.

Swing
To figure out what this swing was worth, we first need to know what happened1. Did the batter whiff, or knock in the game-winning home run? Obviously, the value of his decision to swing will be based in part on what he did with that swing.

According to this metric, here are the top 10 players (on a per swing basis): 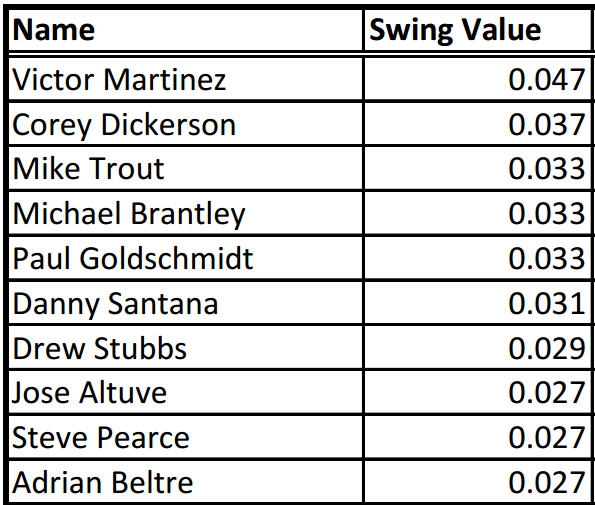 While the list isn’t perfect, I’m reasonably happy with it. Note well that this metric isn’t park- or league-adjusted (although there’s no reason it couldn’t be, in the future), which is why some Rockies are (forgive the pun) so elevated. Nevertheless, you’ve got your Victor Martinez and Mike Trout, your Michael Brantley and your Paul Goldschmidt, excellent hitters all.

As above, we also need to figure out the counterfactual situation, that is, what would have happened if the hitter had decided to swing. This point is where things get kind of tricky, in that we don’t know what would have happened, but we can take a guess. The way that we take a guess could range from the effortlessly simple to the impossibly complex3. As this article represents a preliminary take, I went with something more toward the simple side.

I fit a model to guess the outcome of a swing (in terms of the linear weight value), using the identity of the hitter, the location of the pitch (x- and y-coordinates), and the velocity of the pitch. These variables aren’t a complete list of all of the things which could affect how well a pitch might be struck, but they should touch on the major factors: who the hitter is, where the pitch is, and how difficult the pitch is to hit.

Now that I have the expected value of what would have happened if the batter had chosen to swing, as well as the value of their decision to take, I can calculate the marginal value of their decision by subtraction. This calculation matches our intuition in that the further a pitch is outside, the more value a hitter loses by swinging at it, both in forgoing the called ball they might have had, and probably not being able to get the bat head to the ball very well4. 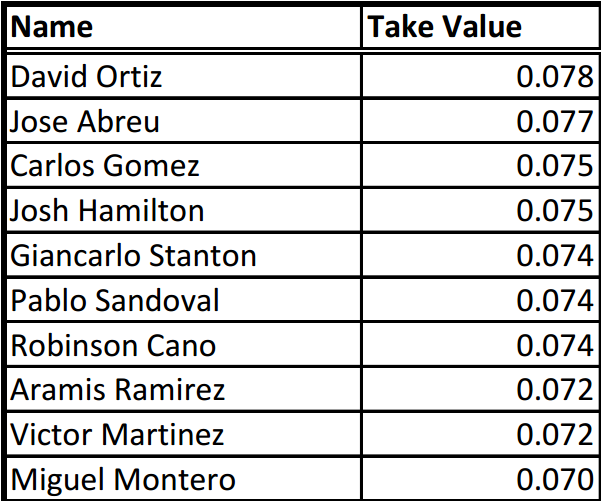 I’m a little happier with the list of best “swing” values than the list of best “take” values. The swing value list accords much more closely with my mental, intuitive list of the best hitters in baseball. The take value list appears a little awry, and is clearly affected in large part by the kinds of pitches different hitters see. Josh Hamilton, Pablo Sandoval, and similar hitters get pitches so far off the plate that to ever consider swinging at them would be folly. So, when they don’t swing, that’s viewed as a significantly positive play by this metric. But on the other hand, they wouldn’t see those pitches to begin with unless they had a prior history of sometimes making completely witless swings at exactly those pitches. In theory, those countering forces should even out, but in practice, it looks like they don’t. Another part of the problem might be that the take values require more modelling and statistical estimation (which is a fancy way of saying “guesswork”). When the models or assumptions which go into the take values are off, biases and distortions can result. With those caveats stated, it’s a start.

If we add together the best swing and best take values, we get (what I consider) the best list yet: 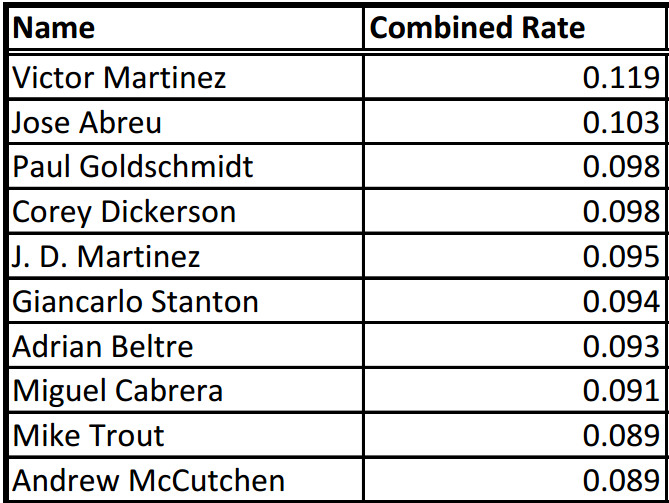 Here’s the full list, with both rate and total statistics for each of the MLB regular hitters, to peruse at your leisure. It’s worth noting that in addition to agreeing well with intuition, it stacks up well with more conventional measures of hitting ability like TAv, with which it has a strong correlation (r = .75). This measurement has the advantage of being calculable for any given pitch, as opposed to TAv or wOBA. It’s more of a process statistic than either of those, because it measures not only the outcomes of a hitter’s plate appearances, but the whole sequence of swings/takes which led to those outcomes.

I want to be clear here that the above measure isn’t a full value-type metric, in the vein of WAR(P) (or even the offensive subset of that metric). For one thing, it doesn’t measure versus a baseline of replacement level. The measurement here is essentially “Runs Above Alternative,” or what actually happened relative to what might have happened if the batter had made the opposite choice. You could call it marginal runs.

This metric can serve instead as a framework to be altered, modified, and mutated by other interested sabermetricians. As a barebones structure, it’s a way to measure the value of hitting at the level of individual pitches, instead of at the level of plate appearances, taking into account the dichotomous nature of hitting.

1Actually, we could get fancier here, and try to figure out what should have happened, instead of simply using the linear weights value of what did happen. More on this below.

Where “LWTS” is shorthand for “linear weight value” (of the subscripted event).

3Effortlessly simple: league-average run value at this count. Impossibly complex: a Bayesian model of the probability of each event (single, double, reached on error, etc.), conditioning on the pitch type, speed and location, which would start with league average effects for each hitter, and then update (in a Bayesian fashion) as data from a hitter was accumulated over the course of his career. If I had unlimited time, I think the impossibly complex approach would produce marginally better results. But I think the margin would be small, and I think doing it properly might take years of work.

4Again, but reversed, because the hitter made the opposite choice:

You need to be logged in to comment. Login or Subscribe
cmaczkow
This is very interesting. It is well outside of my ability, but it would be fascinating to see this compiled for every player who had a plate appearance from last year, in an effort to find an average value for comparison's sake. As you note, there would seem to be a lot of different ways people could run with this (e.g. is there a replacement level? different ranges/baselines for minor leaguers? how do players change as they advance in level?)
Reply to cmaczkow
nada012
Thank you. Yeah, in theory it would be possible to compute for anyone who saw a pitch, but I think it would get inaccurate for players with few pitches, because we don't know how well they'd do if they swung at the ball (which we have to estimate). Could always substitute league average.
Reply to nada012
davescottofakron
Great start. I look forward to this kind of analysis taking into account the relative value of balls and strikes. Some strikes cannot be hit well; some balls can. Some strikes are better than others, etc. These factors also change among hitters as we see by differing heat charts.
Reply to davescottofakron
nada012
Thanks. Very true about the different values of some strikes. The metric takes into account the coordinates of each pitch in attempting to determine its value (so a strike further away from the center is rated as worse to swing at, and a ball close to the edge of the zone is rated as better to swing at). With that said, this measure does NOT take into account individualized hitter "hot zones". That's very difficult to do, and probably best accomplished with multi-year data, as Jared Cross pointed out in a recent piece (http://www.hardballtimes.com/bringing-the-heat/).
Reply to nada012
newsense
Since your "Swing" and "take" values are per pitch, for the combined value wouldn't be more representative to give the weighted average (swing*# of swings + take*# of takes)/# of pitches? This would avoid giving excessive value to the infrequent takes of Hamilton and Sandoval.
Reply to newsense
nada012
yep, I think you are totally correct (mad I didn't think of it myself). Should be easy to do via the attached spreadsheet, but I'll try to update it at some point as well.
Reply to nada012
morro089
It's a 95% correlation. The biggest difference I noticed was that it brought the standard deviation between players from 32.4% to 24.2% (scaled results).

Might be something there Robert...Rob? Robbie? Bob? I'm sure you love those names.


Top 10 are the same players in about the same order.


Reply to morro089
nada012
Ah, cool. Yes, everything stays about the same, but it re-orders the top 10 a bit so that it makes a little more sense (Giancarlo, McCutchen are higher). More significantly, it raises the correlation between Marginal Runs and TAv by .15, so that it's r=.87. (Not that TAv should necessarily be the gold standard, but I would expect any good offensive metric to agree pretty well with it.)
Reply to nada012