1. The Refusing to Turn Down Award
There can be only one nominee for and one winner of this award, and it is Seattle’s Tom Wilhelmsen.

Wilhelmsen’s dancing first came to the attention of SB Nation’s Grant Brisbee in July, when the reliever had a dance-off with the Mariners’ pitching coach during batting practice.

While this is a fine display, it showed little of the practiced excellence that appears in his award-winning performance, shown even after the Mariners narrowly missed out on a wild-card spot.

First, at the beginning of this video, Wilhelmsen is already dancing. So this is just a snippet, a glimpse into what the big righty put out on the field Sunday afternoon. We don't know how long Wilhelmsen danced before this clip, or if he added anything after the charming sunglasses-grab-and-wave-to-the-crowd move, but the moves captured in this 15-second video are more than enough to declare him a proponent of turning down for naught. He’s already demonstrated both caution and a carefree exuberance, one assumes, by throwing his sunglasses and windbreaker down before embarking on the more technical aspects of his dance. There’s the general gyration, the hip shaking, the gliding feet; the only slight deduction in this has to be for the T-Rex arms, which add an air of awkwardness. Of course, that awkwardness is understandable, as one does not usually expect to see a large, bearded, high-socked reliever breaking it down to “Turn Down for What”, but no matter what his dismissive bullpen mates might feel, Tom Wilhelmsen should never stop. —Kate Morrison

2. The Honorary Hawk Harrelson Awards
The Hawkeroo is more famous for other reasons in baseball circles and few of them are positives. There's the secret vendetta he thinks the umpires have against the White Sox, the long stretches of awkward silence during opponents' walk-off wins, and general neanderthal leanings when it comes to Moneyball and its author Billy Beane. But Hawk is also notable for one reason that doesn't quite get as much national attention: his "Best I Ever Saw" declarations.

Oh yes, Hawk's been a part of MLB for at least 50 years He invented batting gloves! He knew Yaz and will tell you stories if you ask him (and even if you don't). He also has a list of "bests" for just about any event or criteria in a baseball. Best top hand? Adrian Beltre. Best plate coverage against the Sox? Alcides Escobar. Quickest bat since Carlos Delgado? Dayan Viciedo. Best at bunting with two strikes? Mickey Mantle. Best ever at hitting a bounced ball? Yogi Berra. The list goes on and on and on. So really, we should just have him give out awards at the end of the year. Best stirrups he's ever seen in baseball this year? Chris Archer and so forth. It would be great fun because you know what Stone Pony? You know who was the best unverifiable and overly qualified list maker I have ever seen in my 20 years of watching baseball? Yaz, but Hawk Harrelson also belongs on that list. —Mauricio Rubio

3. The Bill Veeck Award for Outstanding Between-Inning Ballpark Entertainment
First off, the fact that there is no Veeck Award is a grave oversight on the part of baseball. And between-inning entertainment is like certain other things in life. If you're any good at it… you deserve a medal. Oh, there are the old standbys with the Kiss Cam and Dancing Kids Cam. There's the Seventh Inning Stretch. There's the Eighth Inning song. There's watching the sixth reliever throw his warm up pitches. There's the ever-popular "Dress the interns up in silly costumes and make them race each other" (in Atlanta, it's sponsored by Home Depot. I'm a fan of Hammerin' Hank. My daughter prefers Two-Bit the Drill.) But I think we've all seen enough ballpark trivia and "which hat is the ball under?" scoreboard graphics to last us a lifetime.

In the spirit of Bill Veeck, let's see something new and fun. It'll throw the spotlight for a brief moment on the people that make going to a baseball game fun, but who rarely get recognition. The Stadium Ops people. Unfortunately, much like Cy Young, Bill Veeck will never win the Bill Veeck Award. —Russell A. Carleton

4. The Jim Leyland Award for On-Field Style by a Non-Player

While Jim Leyland gets most of his admiration from being a mustache toting, straight talking skipper, he will always hold a special place in my heart because he occasionally chose to tuck his hooded sweatshirt into his pants. This was awesome for a couple obvious reasons:

Therefore, (tucked in hooded sweatshirt) x (baseball uniform wearing manager) = a lot of absurd. I was always more of a geometry person, but that algebra is as straightforward as it gets. A picture follows for those who lack faith (photo courtesy of the SB Nation Tigers blog Bless You Boys): 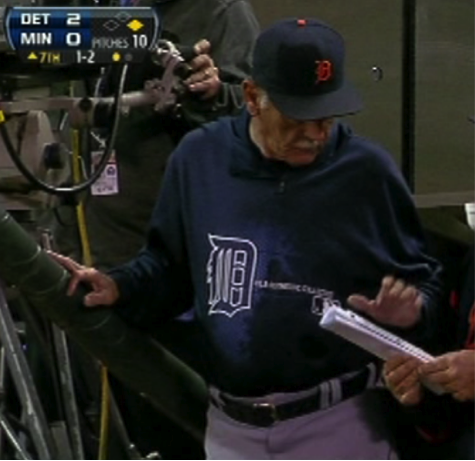 First, we should recognize that Leyland’s feat will never be topped. That said, such a feat is worth honoring each season. To honor Leyland and his unparalleled style, we (read: I) would like to anoint this year’s winner of the Jim Leyland Award for On-Field Style for a Non-Player.

This year’s winners are Mick Kelleher and Rob Thomson, the first and third base coach respectively, of the New York Yankees for always wearing their batting helmets, even in the dugout.

While most base coaches choose to get some hair, cranium, or ball cap time when their opponents bat, Kelleher and Thomson choose to keep things simple. Never do they have to worry about misplacing their helmet or how it makes their hair look; rather, all attention can be given to giving signs and advice.

The most amazing thing to me is that the two people that will spend the most amount of time with batting helmets on their heads will not spend a single second as an actual batter. 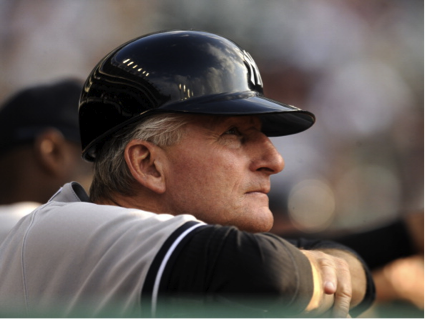 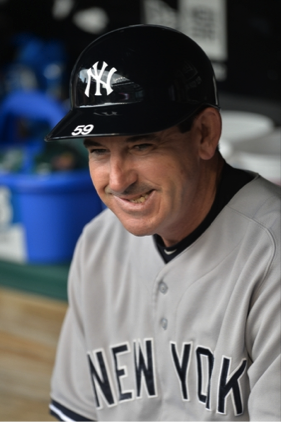 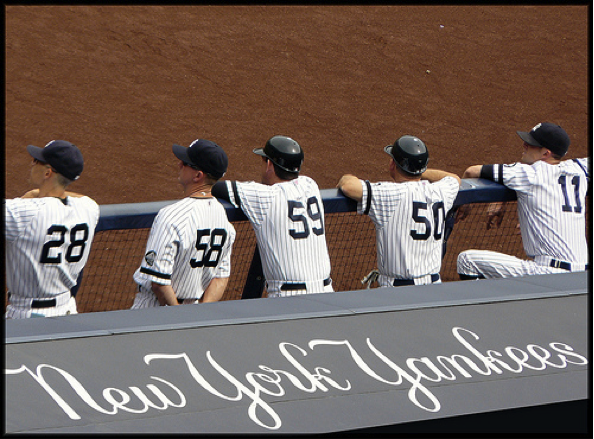 5. The Steve Carlton Award for Outstanding Effort for a Hopeless Cause
One of the most tragic parts of the MVP debate is when somebody gets denied a rightful award because they play on a bad team. Sure, Mike Trout may have been worth 10 WAR last year on a 78-win team, but how come he couldn’t perform at 25 WAR and get the Angels into the postseason? Whatever. I propose an award for a player who posts outstanding stats and plays hard despite knowing before the All-Star break that there is no chance his team will make the playoffs. We can name it after Steve Carlton, who in 1972 put up a 12 WAR season for a Phillies team that won only 59 games.

The obvious go-to this year is Jose Altuve, a man who exceeded expectations in so many ways. His Astros were delighted this year merely not to finish the worst record in the majors again this year, but Altuve had his sights set far higher. He improved his batting average 58 points, added 16 extra-base hits to last year’s total, and stole 21 more bases while being caught four fewer times. He slashed his strikeout rate almost 40 percent.

The clincher came on the last day of the season. GM Jeff Luhnow decided Altuve should sit to protect his chances at a batting title, which supposedly were as much a source of team accomplishment as a personal accomplishment. (Ironically, Luhnow was right about that much: Altuve’s accomplishments were by far the most impressive thing the team had going for it all year. All the more reason to play the guy!) Altuve eventually got the last word and secured his title with two hits in his last game.

The Astros, despite making some progress this year, were a poster child of managerial dysfunction both on and off the field. Only one star shone throughout the year, and he’s the first Steve Carlton Award winner. —Dan Rozenson

6. The Rob Murphy Award For Out-of-Nowhere Relief WTFery
So you might know that I ran a relievers-only league with Effectively Wild listeners this year. There were 132 teams, in 12 draft pools of 11 teams, and we went 25 players deep—so, in other words, 275 players per league, and many more relievers than that actually picked. This was a league where Josh Zeid gets picked nine times. Somebody got desperate and picked Tracy McGrady. It was deep to the point of stupidity, is what I’m saying. And in all this ridiculousness, Ken Giles got picked once. Once! And he had the third-best ERA in baseball, with a FIP to match. Stupid relievers, stupid baseball, stupid baseball relievers.

So here’s how we all missed Giles: He hadn’t pitched above High-A. His ERA there last year was over 6. He walked almost seven batters per nine, and had been prone to the longball, especially considering the lower home run rates of flame throwing relievers. He wasn’t a high draft pick. He isn’t tall. He isn’t even left-handed. How he got picked in even one of our draft pools, I’ll never know.

But it’s a fun reminder that, if we do a draft like this last year, a third of the guys we pick will be terrible. Like Kevin Siegrist. And a third, at least, won’t have been picked just one year earlier. Like Giles. —Sam Miller

You need to be logged in to comment. Login or Subscribe
sfrischbp
Excellent!
Reply to sfrischbp
pizzacutter
Mike Trout should win all of these awards.
Reply to pizzacutter
Number27
Adrian Beltre? Delgado? The Mick? These are players anyone knows. Go watch a Sox game, and watch Chris Sale spin off a curveball to someone for strike 3. Cue Hawk: "Best I ever saw at hitting the curveball was Willie McGinters. Ryan, Feller, Koufax, noneofem could get that boy out with anything but straight gas. That's how it was Back When I Played."

Repeat for ~162 Sox Broadcasts. There's a reason the White Sox are found on WCIU Channel 26 "The U".
Reply to Number27
MRubio52
My favorite Hawk name is Rico Petrocelli without a doubt who usually ends up getting at least one mention every 3 broadcasts. That's a good one you pulled.
Reply to MRubio52
stevekantor
My favorite between innings show was at the San Antonio Missions game 20-something years ago. Henry the Floppy Taco circled the bases with a kid from the crowd chasing, who promptly tackled Henry.
Reply to stevekantor
LlarryA
#3 - Great idea, but I'm not sure how to get voters a reasonable sample of candidates to get a good vote.

Still, I feel compelled to mention a few I've seen:

-- Some years ago, a between innings event here in Arizona included sort of a cross between "Guess the Attendance" and "Let's Make a Deal" that actually ended with a 'lucky' fan winning a big bag of outfield grass clippings.

-- Went to a Marlins' game in Miami last year, and they brought a fan to a TV camera in the LF corner and gave them 30 seconds to spot Billy the Marlin in the "crowd". Now, at a typically-attended weeknight Marlins' game, it's just not that hard to spot a 6 1/2 foot tall metallic blue fish...

-- This year, in AZ, a new game - "Sink or Float" where a child had to decide whether an item would sink or float when tossed into the RF pool at Chase Field. At the last game I attended, it was an opponent-branded Teddy Bear. Yes, they drowned a Teddy Bear, and made a child participate, no less. Please, won't someone think of the children (and bears)?
Reply to LlarryA