When the White Sox signed Jose Abreu for $68 million over six years, responses ranged from optimism to skepticism about how the Cuban rookie’s swing might fare in the United States. In this year’s Baseball Prospectus Annual, for instance, we wondered whether Abreu possessed a swing that could “be tamed by well-placed fastballs on the inner half.” Baseball America’s 2014 Prospect Handbook included another knock: “Some scouts worry about his double toe-tap stride and average bat speed, fearing they will inhibit his ability to catch up with premium velocity on the inner half.”

Armed with only these two snippets on Abreu, I watched him and wondered the same thing. The “slow bat” concern seemed legitimate, as Abreu likely hasn’t seen as many premium-velocity pitchers in Serie Nacional as he will in the AL Central. The former MVP of Cuba’s top league picked a great division in which to challenge some of MLB’s hardest throwers, including Detroit’s flamethrowers and Yordano Ventura. (Well, hopefully Yordano Ventura.)

We’ve only seen two months of major league action from Abreu, so it’s a little too early to jump to conclusions about any possible holes in his swing. As of June 3, Abreu had seen 431 fastballs, fewer than half of which were thrown to the inner half of the plate. He’d swung at 105 of those inside fastballs, and that number shrinks even further when we impose restrictions on fastball velocity.

However, we can confidently say that Abreu doesn’t appear to be completely inept at clubbing inside heat. Four of his eight home runs against fastballs have come on pitches thrown to the location that caused scouts to be concerned, as have eight of his 13 extra-base hits against fastballs. He has whiffed on only three of 30 faster-than-average fastballs thrown to the inner half. In cold, windy Chicago, Abreu has found a way to keep his bat warm enough to connect his barrel with inside fastballs. He hasn’t had a ton of opportunities, but here’s a swing against a Max Scherzer fastball:

And here he is against a 94 mph Josh Lueke fastball:

But this small pool of hits doesn’t tell the whole story. It’s certainly possible that pitchers have been able to tie up Abreu on inside fastballs enough to make the pitch worthwhile—especially if it can set up off-speed pitches thrown away from Abreu.

A quick scan of Abreu’s PITCHf/x data reveals that major league pitchers have indeed read the preseason scouting reports on Abreu. He hasn’t seen an abnormally high amount of fastballs on the inner half of the strike zone, but pitchers have been looking even farther inside—the plot below suggests that Abreu is being targeted in on his hands more often than any other location. 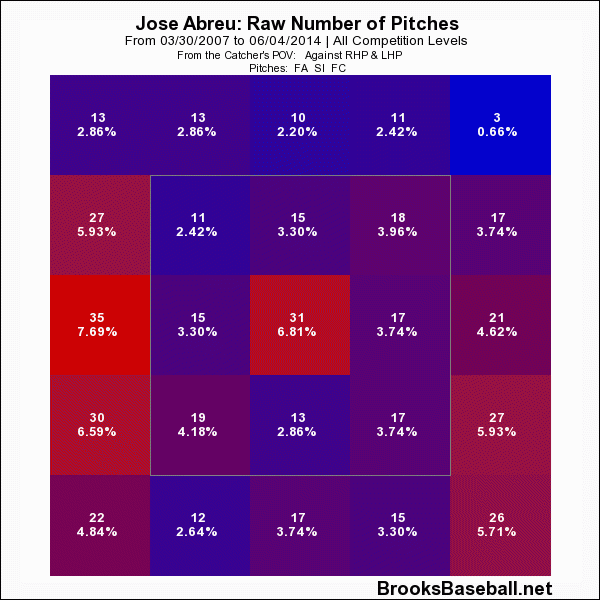 The diagram makes it pretty clear that this inside target (shaded in red) isn’t part of a typical called strike zone. So why throw there? Well, Abreu hasn’t exactly been the model of a disciplined hitter this season. His swing rate on pitches outside the strike zone is one of the highest in the league, and he has been especially vulnerable to low breaking balls thrown as chase pitches (as shown below). 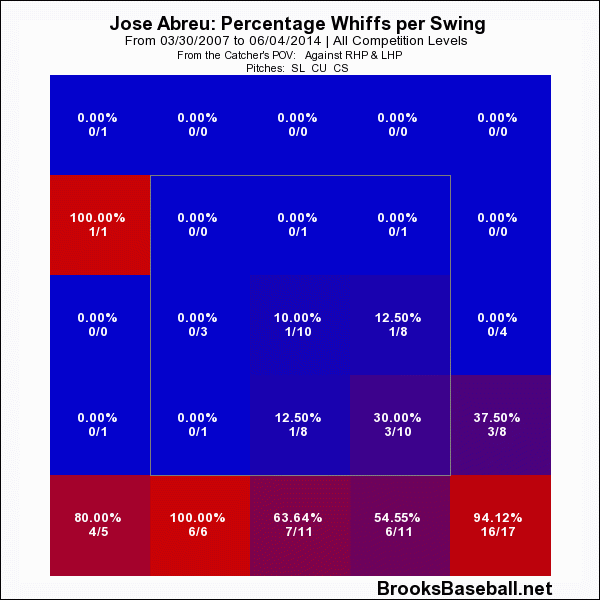 However, he doesn’t appear to swing and miss at fastballs in on his hands (the pitch that we’re concerned with) more often than the average hitter. Despite being targeted inside and off the plate over 90 times, Abreu has whiffed at only three of these fastballs. Though Abreu hasn’t seen a lot of “premium heat” (95-plus mph fastballs), he clearly hasn’t struggled with what has been thrown at him.

So, here’s the question we need to be asking: Are those scouting reports still worth sticking to?

The Lesser of Two Evils
I think the real reason for throwing Abreu inside is the lack of a better alternative. Any pitcher targeting Abreu with a fastball (with less than two strikes on him) has two real choices—away or inside. Most hitters do much better against fastballs thrown to the inner half, but not Abreu. His ability to hit fastballs on the outer half is rare. The heat map below (courtesy of baseballheatmaps.com) plots Abreu against the league-average run value by fastball location. Positive values represent good outcomes for Abreu: 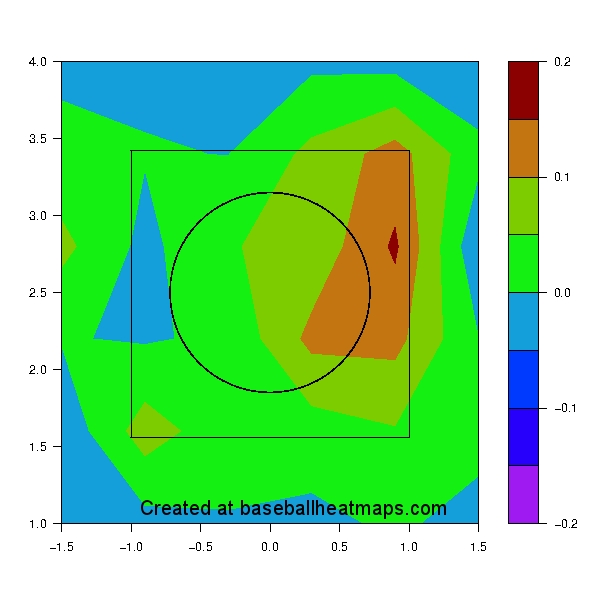 If I were looking to get Abreu out, I sure wouldn’t start him with a pitch on the outside half of the plate. The Cuban slugger has proven to be a strong hitter to all fields thus far, and while he may chase pitches thrown off the outside edge, he doesn’t have any trouble with fastballs on the outer third of the called strike zone.

When Abreu does swing at inside fastballs, he hits them in play and on the ground almost a quarter of the time. His tendency to pull inside fastballs on the ground is notable. Instead of pitching him away, it might make more sense to indulge Abreu and let him hit into the “Albert Pujols shift”: 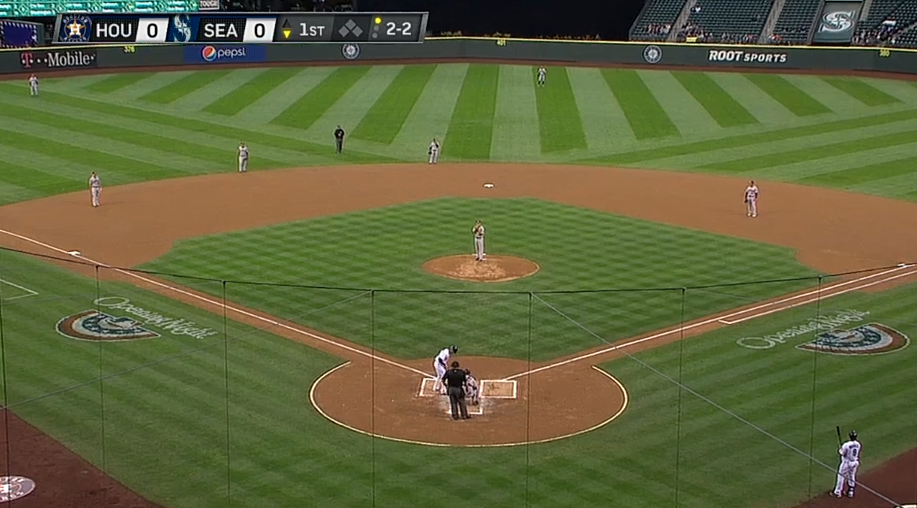 Conclusions
If I had to make a call right now, I’d say that reports of Abreu having a long swing are overblown. Sure, he does a really great job of extending his arms and hitting to the opposite field, but that doesn’t imply that he struggles to get around on inside heat.

Pitchers have yet to find the giant hole that they’ve been looking for, but that hasn’t stopped them from hammering away at the inside corner. In April, Abreu saw more pitches away than he did on the inner half. In May, that trend reversed itself. Will we see pitchers continue to attempt to jam Abreu in June? Considering the alternatives, I’d say so. Or we could see pitchers avoid the strike zone entirely (à la Pablo Sandoval)—that’s always another option.

Thanks to Nick Wheatley-Schaller for video-making assistance.

You need to be logged in to comment. Login or Subscribe
rkowna
The sox are notorious for making bad decisions so at first I thought the Abreu signing was a mistake and they should have walked away after $5.5 a year over 7 years. As a longtime fan of the sox they have been a stone bummer in terms of player development and identification. Suck on Kip Wells and Gordon Beckham as the futures of your franchise ad you will share my nightmare. I think Chris Sale broke the voodoo mojo and maybe Abreu is an homage to Frank Thomases past and not the ghost of Ron Kittle. Abreu is no Puig, but Harrelson is no Scully so there you go.
Reply to rkowna