The sun peeked through the blinds of our Asheville hotel room. A day full of baseball was ahead of us: an 11 AM game in Asheville, followed by a 6 PM game in Hickory. Our busy schedule turned out to be only slightly more tempting than the other side of our pillows, and after some reluctant rumblings, we eventually got ourselves out of bed and out the door. The first stop on our way was a Red Sox Press Conference Dunkin’ Donuts. My egg scramble with veggies tasted sort of like an egg scramble with veggies, which is more than you can ask for from a fast-food breakfast stop.

Shortly after breakfast, we arrived at McCormick Field, home of the Asheville Tourists. The stadium, built into the mountainside, was unlike any other ballpark we’ve ever been to. With food and drink options aplenty, I settled on the always-exquisite “sno-cone,” though I’m still trying to figure out what “sno” actually is. While we are unable to partake in the consumption of alcohol considering our “underage” status, the complexity and number of original beer logos seemed to be something a snooty baseball blogger might like.

While the stadium itself was a joy to experience, the actual dimensions of McCormick Field are completely absurd. McCormick features possibly the most hitter-friendly dimensions in all of the minor leagues. Left field is fairly standard; it’s 326 feet down the line and 370 to left-center. But dead center field is only 373 feet away, and right-center is 320 feet from home plate. Down the right-field line? A comical 297 feet. Granted, the right field wall is a mini-Green Monster. 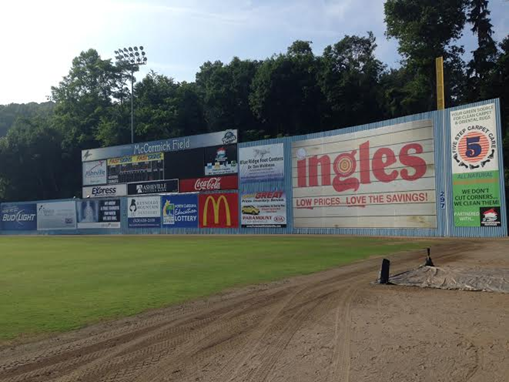 It was “Education Day” at the park, which meant that mandatory lectures on hitting mechanics and pitch recognition were held for the young school children throughout the concourse. Okay, what it actually meant was that the yard was chock-full of young people born after Barry Bonds “retired.” Along with the loud oohs and aahs every time a Tourist player hit a ball into the air, we were treated to a healthy diet of Spongebob Squarepants over the PA system. The best on-field promotion included two sets of three kids fitting into a pair of oversized tighty whities and racing to a set of cones. Jordan lost by a hair.

National Anthem: A nice-looking blonde lady from the visiting Baptist church opened up the festivities with a time of 1:27. Jordan’s guess was 1:19, while I continued aiming high at 1:39.

Mascot Creepiness: The Tourists actually have two mascots: an extremely generic bear named Ted E and a strange-looking moon person thing named Mr. Moon. Ted E was forgettable and harmless. Mr. Moon, on the other hand, was more odd than creepy, with moon craters dotting his face that looked more like astronomically bad green acne. I’d put a 4 on Ted E and a 5+ on Mr. Moon. 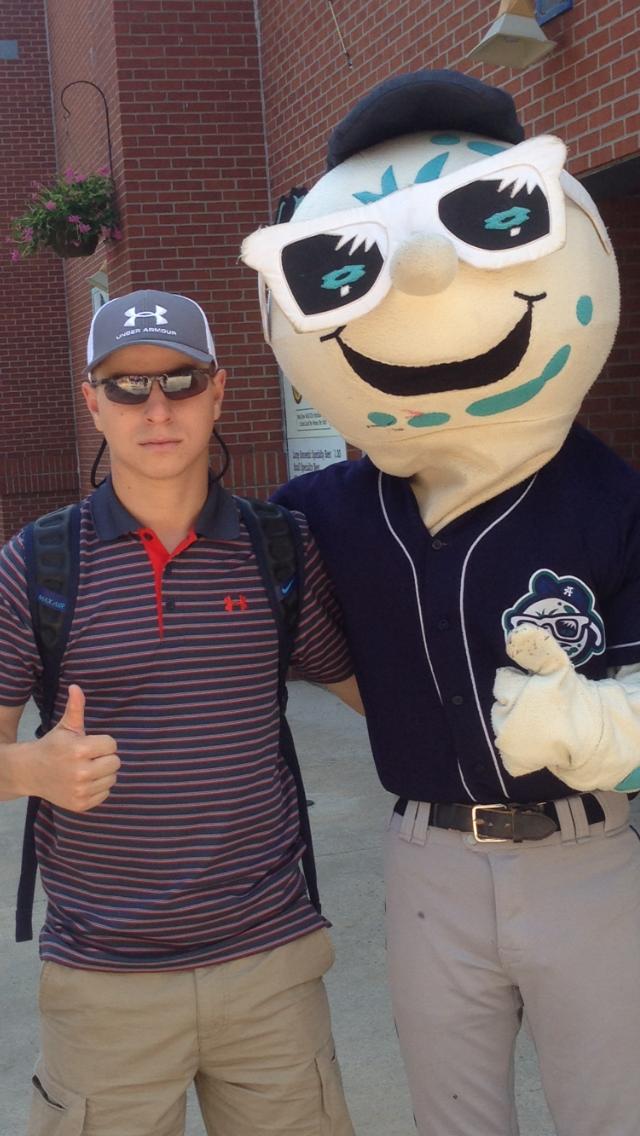 Purchases: I got a Russell Wilson Tourists shirsey and an awesome Tourists hat that apparently glows in the dark. Jordan splurged for a different Asheville cap. About 40 percent of the gift shop revolved around the fact that Russell Wilson once played for this team. Pictures, baseball cards, jerseys, and even shrines of Wilson surround not only McCormick Field, but all of western North Carolina.

Interview by Jordan Shusterman
I didn’t get a chance to speak to any players in Hickory, but I did talk to Asheville first baseman Correlle Prime a bit after the game. Prime was selected out of high school by the Rockies in the 12th round of the 2012 draft. After two seasons at rookie-level Grand Junction, this is his first year playing for a full-season affiliate. He finished the day 1-for-3 (with his one hit being an absolute moonshot to straightaway center field) and two walks. He’s now hitting .289/.325/.561 on the year.

On playing in the ridiculous dimensions of McCormick Field:
“It’s nice as a hitter; probably a bit better for lefties. It’s actually good for a righty because you have an approach to the opposite way. People talk about the field, but it takes a lot of big hits away too. I’ve seen some doubles [turn] into singles and guys get thrown out at first [from right field], so it plays both ways.”

On the right-center field fence only being 320 feet away:
“For the lefties, yeah, they love that. But then again, a lefty will crush a ball, and if you hit it two feet to the right it’s off the wall, two feet to the left it’s a home run. You never know.”

On teammate Tapia and his development:
“When I look at Tapia, I can’t help but laugh because he’s a big clown. He’s a goofy kid; nothing really rattles him and there’s no competition on the mound that’s gonna scare him or affect him. He’s a big-time competitor, and that’s what helps him. He’s got a real good two-strike approach, he gets real low to the ground and it’s hard to blow the ball by him. He’s a tough out for anybody. Coming over from the Dominican, he’s really adjusted well and he’s learning a lot of English on the fly.”

On how he would look as a pitcher right now (Prime pitched for his high school team, which won two district titles while he was there):
“Oh man, I would just throw it as hard as I can. I topped out about 90-91 in high school, so not bad. We had a game, my very first season at Grand Junction, it was like a 17-inning game, and I’m on the bench and I’m like ‘Coach, let me pitch,’ and he’s like, ‘Nah, you can’t do that anymore. You’re a first baseman now.’ They took someone from the outfield because they know I’d probably end up doing something stupid.”

National Anthem: A heavyset man with Elvis Presley muttonchops was given the patriotic task. He completed the anthem in a solid 1:30. Jake was closer, with a guess of 1:35. Jordan underestimated this man’s ability to draw out his expression of American pride with a guess of 1:19.

Mascot Creepiness: The Crawdads’ mascot is unfortunately not a dad. It’s a giant red Crawdad thing with enormous pinchers named Conrad the Crawdad. The crazy loopy ears on top of the head and the terrifyingly persistent eyes give this mascot a 6 OFP with a current 5+.

Purchases: Unfortunately, Hickory didn’t have a car flag to go with the one I got in Lynchburg, but I did get a souvenir to help with the pimping of my ride. No, my window isn’t actually broken and no I’m not a soccer mom, I’m just a P-I-M-P. 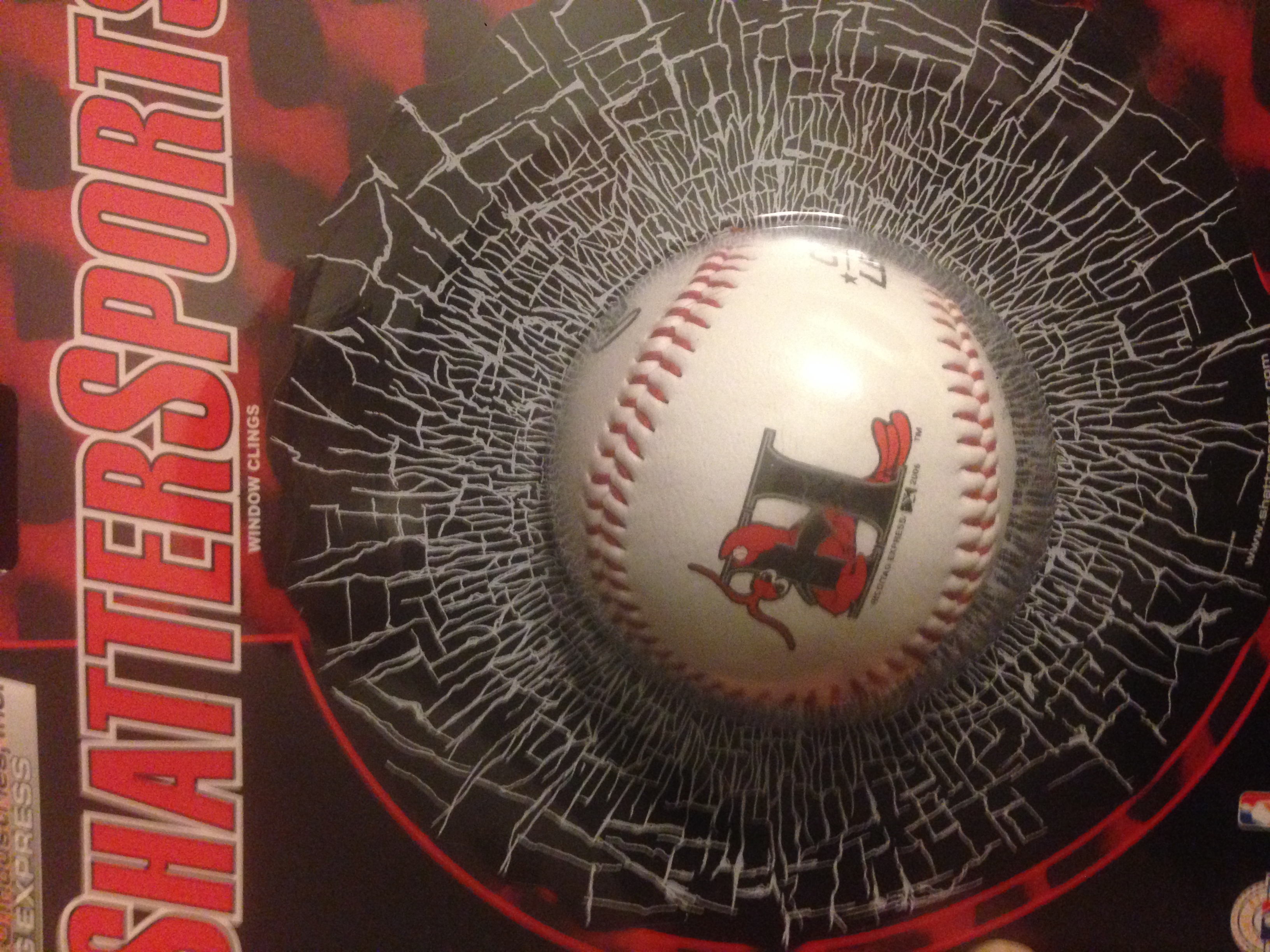 What’s Next: A five-hour drive to Huntsville, Alabama, where we will be greeted by these majestic beauties. Kris Bryant and the Tennessee Smokies await.

You need to be logged in to comment. Login or Subscribe
mranney
Nice article; enjoyed it!
Reply to mranney
Chiefsnark
I've been to Asheville. By the way, if you're there again, there's a place on the main drag--I think called the Tupelo Cafe but any local can tell you where it is--that you need to head for and not a Dunkin' Donuts. The only problem I experienced after eating a huge meal was that instead of going to the game I sort of wanted to be like an anaconda on Animal Planet...just slink off somewhere for a while and digest.

I've been to 104 minor league and 42 major league ballparks and this was the only place where they had a prayer before the game. Do they still have one?
Reply to Chiefsnark
TwinsfanTravis
Tupelo Honey is what you're thinking of and you are right, it is great. But by far the place to go for breakfast is Sunny Point Cafe on Haywood rd. in west Asheville. The best juevos rancheros this side of the moon. 12 bones BBQ isn't bad either.
Reply to TwinsfanTravis
70Glove
We went to Sunny Point Cafe for breakfast. Absolutely awesome.
Reply to 70Glove
TheFFInformer
From 373 to 320 and then 297? What is behind that fence that prevented them from extending right field? A national forest persevere or landmark? That is odd?
Reply to TheFFInformer
Marcgiz
The football field on the right is higher than the pressbox. I think a little TNT might be needed to make more room in right.

Will oblige y'all on that one, and with thankfulness that the agony now plagues Cleveland. It's rather obvious that you lads have not spent much time in KC, Boston, or in the vicinity of Lake Erie.

Mike Aviles does not have bat "wiggle." He has "bat revolutions." Aviles is not the first player whose bathead before the pitcher's delivery revolves around the position where it SHOULD be. However, he's the first who revolves his bat the wrong DIRECTION. For a RHH, for example, the bathead should revolve counter-clockwise, mimicking the arc of a successful swing. Aviles' revolutions are CLOCKWISE. So not only is he not "quiet" at the plate like most successful hitters, but his pre-pitch bat noise is preparing his muscle memory for just the opposite of what they need to be doing in a couple tenths of a second.

Aviles' bat revolutions are definitely irritating, perhaps maddening. We suffered in KC through parts or all of 3 1/2 seasons of the bat-ackward revolutions. One fact is that many fans coped only by timing their breaks to concession stands, bathrooms and smoking aread to coincide with Aviles At-Bats. The urban legend is that Dayton finally traded Aviles after being begged by 98.7% of all metro and regional baseball coaches.

Once the percentage of distraught coaches exceeded body temperature, Dayton was able to snooker Boston (Yeah, I know, this part is HARD to believe, but Dayton was born in Kenya) to taking Aviles for Yamaico Navarro and Kendal Volz (yeah...kinda figured you hadn't). For the next few years, the Royals did not field a single complaining call about having the worst position player in baseball in Chris Getz. We were SO happy not to have to watch Aviles.

Boston soon caught on themselves and sent Aviles to Toronto in late October 2012 for John Farrell and David Carpenter, and no fiction writer has even tried to explain that. Two weeks later Toronto had to throw in Yan Gomes to get Clevland to take Aviles for Esmil Rogers.

Conclusion I: Toronto was more anxious to get rid of Aviles than Clevland was Rogers. II: It's still better to live in KC than Cleveland.
Reply to TeamPineTar
Andrew13
Really enjoying this, good stuff guys.
Reply to Andrew13
Severe
Love the articles. I'm waiting for the review of Huntsville with impossible to locate Joe Davis stadium. I went to one game there, and people looked at me as I came in like I'd just walked into the wrong church.
Reply to Severe
buddha
A Pete Rose Jr. sighting! Good for him to still be in the game. Man that brings back childhood memories. Back in '89 he was an Orioles farmhand and came to Erie during the summer; I was all of 9 and a season ticket holder with my mom and grandpa.

I remember him saying repeatedly he was most appreciative of his time there, because we didn't treat him like his dad's kid, especially with all the gambling hubbub around then. When he finally got to the bigs, it was a pretty big deal to the sports aficionados in town...we've had lots of prospects make it and excel, but few to none had a story like Jr.'s.
Reply to buddha
drawbb
Can I ask what "derpy" dimensions are and also whence the name Cespedes Family BBQ originates?
Reply to drawbb