The Tuesday Takeaway
He’s back.

After 41 days on the disabled list with a left teres major muscle strain, Clayton Kershaw was activated to face the Nationals last night. He needed only 12 pitches, 11 of them strikes, to navigate his first inning and just three to record his first strikeout:

Kershaw’s slider and curveball were his bread-and-butter throughout the 8-3 win, accounting for 13 of the 14 whiffs he induced. Twenty-two of his 26 breaking-ball strikes were of the swinging variety, and only three of them were balls in play.

The left-hander zoomed through seven innings of one-run work. He gave up nine hits, but all of them were singles. On the two occasions when the Nationals strung together two or more knocks in an inning, Kershaw fanned a pair to retire the side.

Rookie Blake Treinen, who was making his first major-league start after three relief appearances, turned in a valiant effort, matching Kershaw step-for-step through five innings. He even picked up his first career hit: a single to center with two away in the fifth. But Treinen unraveled when he took the mound for the top of the sixth, allowing Kershaw to take first on an error. Adam LaRoche followed by kicking the next play, and then Carl Crawford reached on a hit to the catcher, loading the bases for the Dodgers without the ball ever leaving the infield. The visitors wound up with a three-spot, which was ample support for their ace.

Anthony Rendon singled to lead off the home half of the sixth, but Kershaw picked him off. Danny Espinosa reached on a Hanley Ramirez error leading off the seventh, but Kershaw picked up his shortstop by coaxing a 6-4-3 double-play ball from Jose Lobaton. Ramirez atoned for the error with a long ball in the top of the seventh before Kershaw was lifted for a pinch-hitter, and the scoreboard read 8-0 when Chris Perez took over.

Kershaw used just 89 pitches to record 21 outs. He did not exceed 17 in any inning, and he tossed a dozen or fewer in five of his seven frames, erasing any concerns about rust—except when he forgot that hitting requires a bat.

The 26-year-old has some catching up to do to hold off Jose Fernandez, Johnny Cueto, and—among others—teammate Zack Greinke to earn his second straight Cy Young Award. If Tuesday’s outing is any indication, though, it won’t be long before Kershaw’s fellow senior-circuit studs are looking over their shoulders.

Quick Hits from Tuesday
Kershaw wasn’t the only starter to pitch well last night after time away from the majors. Tuesday was a day of many happy returns—and debuts, too.

Up in Cleveland, Josh Tomlin—whose 2012 campaign was cut short by Tommy John surgery on August 22, and who spent almost all of 2013 on the shelf—finished his journey back to the Indians rotation with 6 2/3 innings of one-run ball versus the White Sox. That “special” effort earned the right-hander his first major-league win in 670 days.

Along the way, Tomlin did two things that Carlos Carrasco, whose spot he usurped, never accomplished in four April starts: He recorded an out in the seventh inning, and he made it that deep into the night without permitting at least four runs. That should buy the 29-year-old some leash from manager Terry Francona, who also has Trevor Bauer waiting in the wings at Triple-A Columbus.

John Axford, who’d suffered consecutive defeats on Sunday and Monday, was unavailable to pitch in Tuesday’s game, so Francona went to Bryan Shaw in the ninth inning. The righty coughed up an unearned run but converted the save chance to cap the 4-2 victory.

Meanwhile, on the Twins side, Eduardo Escobar did something he’d never done before—though it’s possible that he was jinxed by his club’s communications director:

Eduardo Escobar has 380 career plate appearances & never hit into a double play…not many guys can say that! #MNTwins

Sure enough, with Kurt Suzuki on first in the top of the fifth, Escobar lined a ball right at first baseman Nick Swisher, who doubled off Suzuki.

Was talking about GIDP…the streak continues…

A technicality saved Dustin Morse from a night of endless Twitter grief. And it means that Escobar, who still hasn’t grounded into a twin killing in 383 major-league plate appearances, will take the field on Wednesday on the doorstep of post-World War II history:

Back to the happy returns, this time down south in Atlanta. The Braves had dropped seven straight, and they needed Gavin Floyd—who, like Tomlin, was coming off of elbow surgery—to play stopper. Job done.

Floyd battled Tyler Lyons to a draw through six innings, benefiting from a Justin Upton homer in the fourth, then giving that run back on an RBI single by Matt Holliday in the sixth. He’d last one more frame, finishing with seven innings of six-hit, two-walk, one-run work, over which he threw 104 pitches and struck out five. The Braves scored the deciding run in the eighth on a single by Chris Johnson.

Most importantly for the home nine, Floyd’s stuff looked no worse for the wear of the operation to repair his ulnar collateral ligament and flexor tendon, which took place almost exactly a year ago (May 8, 2013). He averaged 92 mph with his fastball and scraped 95 with his four-seamer, right in line with his pre-surgery velocities.

The 31-year-old Floyd could become a key factor for the Braves, whose early-season rotation dominance might prove ephemeral if Aaron Harang returns to his 2013 form. One start in, the one-year, $4 million contract Floyd signed on December 16 looks like the latest in a host of offseason bargains uncovered by general manager Frank Wren.

When the Tigers shipped Doug Fister to the Nationals for three players in December, just about everyone found the deal “puzzling.” But Ben Lindbergh cautioned in the afore-linked Transaction Analysis post that it’s possible “none of us on the internet knows anything.”

Robbie Ray, the centerpiece of general manager Dave Dombrowski’s return, offered some evidence to support that theory in his first major-league impression.

Taking on the Astros at Comerica Park, Ray delivered 5 1/3 innings, holding the visitors to one run on five hits and a walk. He struck out five and induced 10 whiffs on 86 pitches, 55 of which were strikes.

The 22-year-old Ray lived up to Mark Anderson’s scouting report, pounding the zone with his 92-94-mph fastball and changeup. Together, those two offerings comprised 80 percent of his arsenal and elicited all of the swings-and-misses that he induced.

Our month-and-a-week-long wait for the first instant walkoff is over.

With nobody on and two away in the last of the ninth at PNC Park, Starling Marte launched a deep drive off the top of the right-field wall. Ehire Adrianza’s relay from Hunter Pence got past Pablo Sandoval, but the third baseman recovered it in time to gun down Marte at the plate and send the game to extra innings.

After further review, Marte was deemed to have touched the plate before Buster Posey applied the tag, and the ruling was overturned to give the Pirates a walkoff, 2-1 win.

Except that the Pirates had already walked off the field. Some two minutes after Marte’s 360-foot sprint, they poured out of the dugout and gave Marte the props he was due. No chase or dogpile on the infield, but a worthy celebration in spite of the delay.

Which leaves us with a question: What should we call this new baseball phenomenon? An instant walkoff, as the official MLB Twitter account suggested? A walkoff challenge, or walkoff replay, or walkoff review? Or something else entirely? Leave your suggestions in the comments.

Pablo Sandoval is off to a rough start in his bid to secure a long-term contract. He’s hitting .167 through 31 games, leaving both the local media and his manager wondering if he’s trying too hard. Exhibit A:

That might be the most desperate emergency hack you’ll ever see.

The Rangers put the shift on for Carlos Gonzalez with runners at the corners, a reasonable decision given how infrequently he hits sharp ground balls up the third-base line. It didn’t work this time…

…much to the chagrin of Adrian Beltre, who left Little League coaches everywhere cringing when he threw his glove.

The Defensive Play of the Day
Jose Altuve is one Altuve tall. He needed every inch of that Altuve to make this play—the only way the Astros found to retire Miguel Cabrera all night:

On the heels of a breakout year cut short by a suspension for his connection to Biogenesis, Cabrera has seen his approach go off the rails. He’s seeing fewer pitches in the zone and swinging more often. To make matters worse, when he’s swinging at pitches in the zone, he’s finding it more difficult to touch them.

Cabrera did the bulk of his damage versus left-handers last year—amassing a .334 True Average compared to a .255 clip versus righties—but his discipline yielded a .328 on-base percentage from the left-side batter’s box, even though he hit only .248. 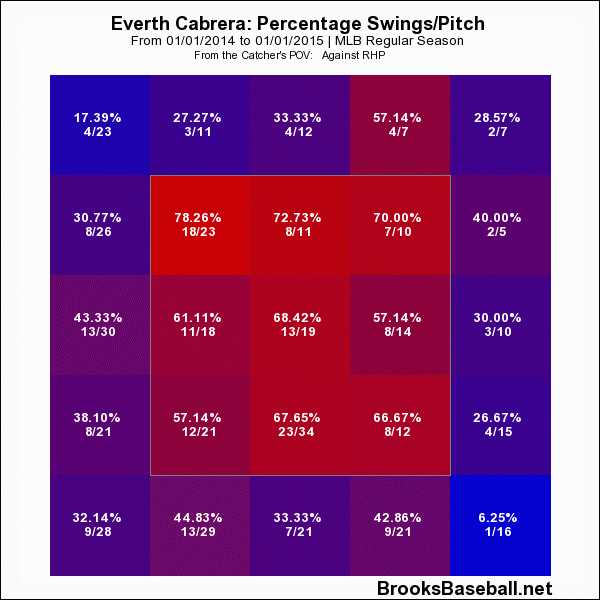 Now, that discipline is gone, and it has taken Cabrera’s walk rate along with it. He’s drawn three bases on balls in 117 plate appearances versus right-handers so far this year. James Shields, whose 5.2 percent walks allowed clip ranks 20th among qualifying starters, won’t make things any easier on Cabrera this afternoon (3:40 p.m. ET).

You need to be logged in to comment. Login or Subscribe
tockeaux
Charlie Wilmoth at BucsDugout.com called it a "wait-off." I like it.
Reply to tockeaux
jfranco77
I like wait-off. I was going with a "walk-on" because they were all in the dugout, and then they all came back onto the field. But wait-off might be better.
Reply to jfranco77
mschieve
I don't have a suggestion, but I know I don't like instant walkoff. I would think of a HR as an instant walkoff.
Reply to mschieve
statsrath
I'm with you on this one, and that was exactly my problem with it. If anything it's a delayed walkoff.
Reply to statsrath
MaineSkin
You also need to know Kershaw walked out from the dugout and onto the on-deck circle w/o a bat. I'm thinking it's the first time he's actually held a bat since last year. Reason number whatever showing why P should be at the plate. On that note, LAD had 33 RC from their Ps last year or something crazy like that. Only 3 teams had a positive RC from thier Ps to start and the next highest to the LAD were in single digits.
Reply to MaineSkin
jguariglia
god I love these scroll over play videos! Best tech upgrade in a while.
Reply to jguariglia
asstarr1
I don't know what it should be called, but it will probably end up being called something like the Jimmy John's Freaky Fast MLB NY Command Center Instant Replay Game Ending Win.
Reply to asstarr1
DetroitDale
Before we get too excited about Robbie Ray, remember that game was against the Astros, let's see what he does against a major league team first.

Reply to DetroitDale
pdelacorte
The 25-day-old link on the matter of Sandoval wasn't very illuminating. Nothing more recent?
Reply to pdelacorte
Dodger300
"The left-hander zoomed through seven innings of one-run work."

Correction: Kershaw did not allow any runs. He pitched shut out ball, leaving with an 8-0 lead.

Rather, Chris Perez allowed all three Nationals runs in relief.
Reply to Dodger300