We don't nearly appreciate the extent to which luck decides who wins or loses baseball games. We think we do, because we look at BABIP and Pythagorean records and such, but really there are layers upon layers of luck—luck being the loaded word; good fortune being perhaps the more accurate phrase, and more generous—that we either don't notice or don't anticipate. The ending to this game would fall under the luck we don't anticipate.

By now, you've made up your mind on whether the obstruction call that granted Allen Craig safe passage home with the winning run was the right call. You're probably so certain of your decision that you can't even imagine a person would dispute your ruling. It's so obvious! How could you miss that? Without a doubt, that was/wasn't obstruction. But, whether the call was right or wrong, we should recognize that the very fact that so many people currently disagree with each other about it is evidence that it's not nearly that simple. It very easily could have gone the other way, right or wrong.

The rulebook, for example, is extremely specific on this play. At the end of Rule 2.00 (Obstruction) Comment, it lays out this exact scenario: "For example: if an infielder dives at a ground ball and the ball passes him and he continues to lie on the ground and delays the progress of the runner, he very likely has obstructed the runner." It's so specific. It is as though this play happened and they wrote the rule immediately after with a play exactly like this one in mind. And the rule they came up with is… ambivalent! "He very likely has obstructed the runner." Not "he has," but "he very likely has." Probably. Maybe. Up to you to decide. Use your best judgment. What am I, God?

A few statements of fact:

1. Will Middlebrooks attempted to field a ball he had the right to field.
2. Upon failing to field that ball, he was in a position to impede Allen Craig's attempt to score.
3. Allen Craig has a generally acknowledged right to attempt to score.
4. He (Craig) did not do anything unusual or unnatural. He stood up, ran toward home, and was thwarted.
5. Therefore, Middlebrooks has "very likely" obstructed the runner.

Here's the GIF that you've probably already seen, from @cjzero:

Now, in the defense of uncertainty:

1. A reasonable person might consider Middlebrooks to have still been in the act of attempting to field the ball. He had not moved on to another action. He had not failed to move, with unnecessary delay. If—and, frankly, we're going to get into hypotheticals not because I want to convince you of anything but because they are the best way to grapple with the consequences of our assumptions—Middlebrooks had leapt for the ball, surely his descent to earth would still be considered part of the act of attempting to field the ball. So, the umpires are forced to grapple with difficult decision no. 1: When does Middlebrooks stop being a defender and start being an obstruction? When does he go from lying on the ground to "continu(ing) to lie on the ground," as specified in the rule? Is it the second a ball is one inch past him? Maybe! But that's an awfully demanding requirement, and one that might make an umpire look at the "very likely" portion of that rule and conclude that the defender acting in good faith falls into the implied exceptions.

2. Upon failing to field that ball, he was in a position to impede Allen Craig's attempt to score because of Allen Craig himself. Maybe, at least. Here's the frame-by-frame of the play: 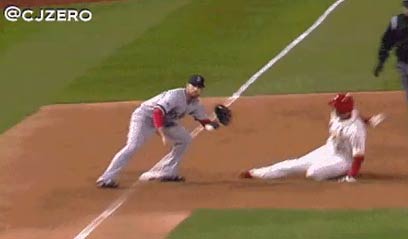 Frame 1: Middlebrooks reaches for the throw, which is leading him away from the base. 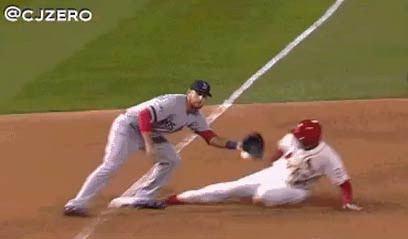 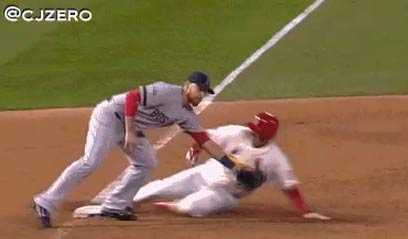 Frame 3: Middlebrooks, standing in front of the base, appears to have his glove hit by Craig, sliding. 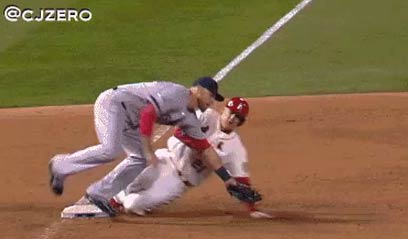 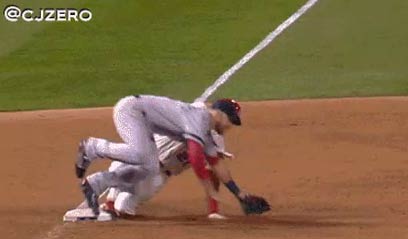 Frame 5: Middlebrooks topples over, putting all the parties in place for an obstruction call. In Timothy Burke's GIF of the trip itself, Middlebrooks' body is lying on the ground at an angle that suggests he was spun a bit, like by Craig. Naturally, Craig has every right to slide into the base. Just like Middlebrooks has every right to dive for a ball in an attempt to field it. Does it change the math from step 1, when we try to determine when Middlebrooks gave up his rights, if Craig is himself the reason for Middlebooks ending up in an obstructing position? Remember: "very likely has obstructed." The rules want us to consider these things.

3. Yes, Allen Craig has a right to score, by running in a baseline toward his next base. And, yes, the baseline is that line which he himself sets when he starts toward the base. Allen Craig was running in his baseline and Will Middlebrooks lifted his feet up and blocked that baseline. But Middlebrooks, in a more generous interpretation of the play, lifted his feet away from the more common baseline. For all we know, he was trying to clear a space for Craig, and was simply unfortunate that Craig was running a somewhat unconventional route.

Now, the natural response to this is a great response: Intent doesn't matter. (This is a great response as nearly all defenses of the obstruction call are great defenses; it being the case, after all, that an obstruction call is completely reasonable! As would be, many intelligent people would argue, a non-obstruction call.) Intent doesn't matter in sports officiating, but of course intent does matter sometimes. Falling down in soccer isn't against the rules; falling down on purpose, to deceive the officials, is. Throwing a baseball that hits a batter isn't against the rules; doing so intentionally very much is. The neighborhood play at second base is simply a fielder failing to touch the bag but doing so intentionally, and being granted leniency by the knowing umpires. (The word intention appears in the rulebook 47 times.) Heck, umpires often fail to call a strike when the pitch, though in the zone, is not where the pitcher and catcher had intended it. That last one is a lousy part of umpiring that should make you mad, but it establishes a basic fact about umpires: they consider intent. It is perfectly consistent with how umpires do their jobs, and how the game is played. In a situation like this, where the rule is intentionally ambiguous, then it is arguably truer to the nature of the sport for intent to be considered.

I lean toward calling obstruction, and I lean toward cleaning up the wording in the rulebook before this happens again and/or starts getting exploited by runners who realize that the rulebook apparently gives them exploitably broad rights. Of course, if runners started abusing this—intentionally running into defenders on the ground—I assume umpires would stop granting them bases. Intent, after all, matters to umpires.

My point is not that the umpires made the right call, or the wrong call. It is that they very easily could have made either call. The only wrong opinion in this case is certainty, because the rulebook very specifically leaves room for uncertainty. It was the Cardinals' good fortune that it went their way, and the Red Sox' bad fortune that it didn't go their way. Will Middlebrooks didn't do anything wrong. Allen Craig didn't do anything wrong. There's no morally right solution in this rulebook, so Dana DeMuth and Jim Joyce chose the morally neutral one: They more or less guessed.