To a certain extent, context determines how ugly a loss looks. Under normal circumstances, a 9-0 defeat can be classified as convincing. But after the first five games of a neck-and-neck NLCS in which no game has been decided by more than three runs—and in which the two teams have combined for nine runs only once—a 9-0 defeat feels like a lopsided, impossibly-out-of-reach embarrassment, especially considering that the losing team started the best pitcher in baseball.

I’m not going to tell you that Los Angeles didn’t lose ugly in Game Six, just like St. Louis lost ugly in its own 9-0, pennant-deciding defeat to San Francisco last season. (For any Cardinals fans still smarting from that series, the symmetry has to be satisfying.) But what I couldn’t help dwelling on as this one wound down was how much had to happen just so for the score to seem as extreme as it did, and how few things would have had to happen differently for Clayton Kershaw’s line to look respectable.

By the time the Cardinals stopped scoring, Kershaw had been charged with seven earned runs, which would suggest that this was one of the worst outings of his career. (The lefty has allowed seven or more earned runs only three times, most recently in May 2010.) But through the first two innings, he was effective as ever. Kershaw allowed two hits, but struck out three and induced outs on two popups and a grounder. Carlos Beltran’s double came on a pitch left out over the plate, and Shane Robinson’s single on a pitch that didn’t get quite far enough inside, but Kershaw was, for the most part, hitting his spots. His stuff seemed solid; on the day, he threw exactly as hard as he had all season (93.4 mph average fastball velocity).

Kershaw began the third inning by getting Michael Wacha to ground out on a curveball that went exactly where A.J. Ellis wanted it, lowering his 2013 playoff ERA to 0.42. Then the St. Louis lineup turned over, Kershaw’s command wavered, everything that could have gone well went worse, and very quickly, the game got out of hand.

Kershaw threw six fastballs, four sliders, and a curveball, and all 11 pitches had something in common: they went nowhere near where they were supposed to. Here’s where they ended up (this is from the pitcher’s perspective): 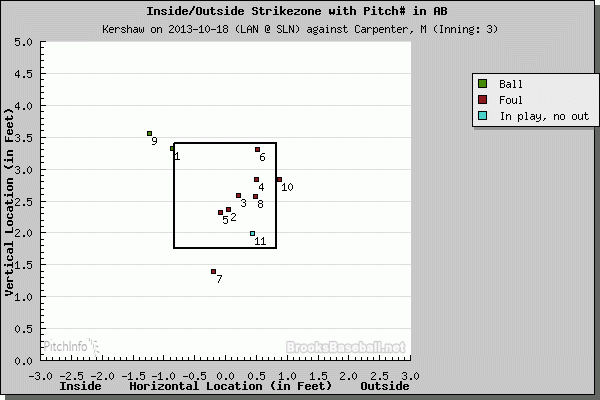 Most of Kershaw’s pitches ended up in the strike zone, a few of them dead center. That wasn’t his plan. Here are the approximate locations he was aiming for, also from the pitcher’s perspective:

I didn’t bother labeling each pitch, because they’re clustered so closely together. Except for pitches eight and nine—the ones where he set up on the inside corner—A.J. Ellis set his target at the knees on the outside corner or a few inches outside. Kershaw never really came close. On the 11th pitch—ironically, the one that was closest to where Ellis wanted it, though not close enough—Carpenter punished him.

It’s not easy to imagine an alternate outcome for that plate appearance: Kershaw’s process was poor, exactly the kind of pitching that results in an extra-base hit. But it is easy to construct a scenario where he gets out of the inning unscathed. Here’s the end of the next at-bat, a single by Beltran:

Kershaw doesn’t get the pitch inside, but at least he misses low. And while the ball was hit fairly hard, it was within range of Mark Ellis, who made some excellent plays to his left in this series. If anything, Ellis actually overruns it, or maybe mistimes his stab slightly (or maybe the ball took a strange bounce).

According to GameDay, Ellis deflected it, though it’s tough to tell. If we could simulate that play repeatedly, he would make it some percentage of the time. If he had, that would have been the second out, and if Kershaw had proceeded to strike out Matt Holliday—as he did in actuality, AKA the Dodgers’ darkest timeline—he would’ve been out of the inning.

Instead, it was an RBI single, and Yasiel Puig compounded the problem by committing the first of a few mistakes he would make, throwing on the run and off balance and allowing Beltran to advance to second.

Beltran being on second was significant, because after Holliday’s K, Yadier Molina singled to the left of second.

If Puig had made a strong throw to the cutoff man or to second on the Beltran single, then the runner would’ve been on first when Molina was up, and maybe Hanley Ramirez would’ve been shaded slightly closer to second. In that scenario, maybe he could’ve gotten a glove on Molina’s groundball and kept it in the infield. The David Freese single that followed was also on the ground, directly over the mound, and Kershaw came close to a kick save:

He didn’t, though, and that brought up Matt Adams. Kershaw got ahead of Adams 1-2, then threw this pitch, which he wanted so much he pounded his glove in frustration.

On 3-2, he threw one at the same height but over the center. Again, Ellis tried to frame it, and again, Kershaw couldn’t believe he didn’t get the call.

According to Brooks Baseball, both of those pitches were slightly low: 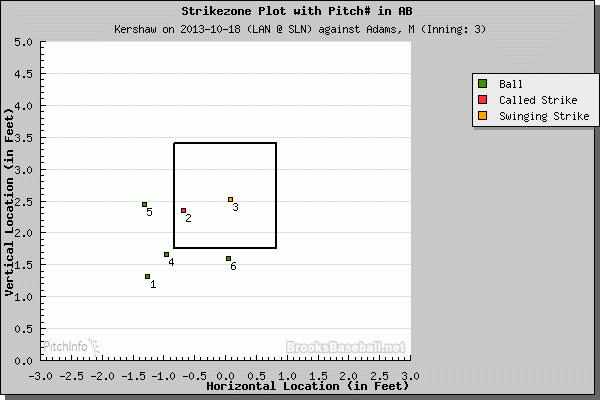 They should have been balls. But can we imagine a scenario in which one of them was a strike? Of course we can. In fact, if we fast-forward one pitch, we'll find an example:

That’s the first pitch to Shane Robinson, the very next batter. The last pitch to Adams was 1.605 feet above the ground; this one, at 1.581, was lower, but it was called a strike.

Maybe it was a makeup call, but it doesn’t matter. The point is that it’s within the range of possibilities for a pitch of that height, from Kershaw to Adams with umpire Greg Gibson behind the plate, to be called a strike. In the Dodgers’ darkest timeline, it wasn’t one, and the inning continued.

Here’s how it continued: with Robinson slapping a single the other way.

“Seeing-eye single,” I said to my girlfriend and my dog, at least one of whom was asleep. “Outstanding hitting,” Ron Darling said a split second later. You make the call. It was a grounder, not hit particularly hard, and it was just out of Ellis’ reach. Maybe Robinson did something to ensure that that ball would end up exactly where it did, as opposed to a foot to the left and inside Ellis’ glove, but when I see a weak groundball that sneaks through the infield, I assume it was more the result of fortuitous timing than it was an intentional act. Whichever it was, Robinson’s single scored Molina and Freese, giving St. Louis a 4-0 lead.

That was where it stayed, for the moment. Puig made another mistake to allow Adams to advance to third, this time throwing too high:

But Kershaw intentionally walked Pete Kozma, then struck out Wacha, the sort of easy escape from an inning that doesn’t work in the DH league. He’d thrown 81 pitches through three, and 48 pitches in the third inning alone. He recovered to retire the side in order in the fourth, but his sorrows resurfaced in the fifth with a single by Molina and another Puig error that gave an extra base away:

Freese followed with yet another grounder just out of the reach of an infielder:

Then Matt Adams doubled to drive in Molina and knock Kershaw out of the game. Again, we can play the alternative outcome game: if Puig doesn’t commit the error, Molina stays at first. If Freese’s grounder goes a couple feet to the right, Ramirez fields it and forces a slow Molina at second. Adams’ double doesn’t score anyone.

But it did, and so Ronald Belisario came in and got a grounder from Robinson. Hanley threws home, and A.J. Ellis and Juan Uribe chased down Freese for the first out. After another intentional pass of Pete Kozma, Wacha hit a weak tapper that should have turned into an out at home, but the ball got stuck in Mark Ellis’ glove. Another run scored.

J.P. Howell replaced Belisario and got Carpenter to fly out, scoring Robinson. Then he threw a ball in the dirt that bounced just far enough away from Ellis for Kozma to score, and Beltran sealed the deal with another perfectly placed grounder:

That made it 9-0, and the final four innings were a formality. In the third and fifth innings, the Dodgers resembled this unfortunate fan, getting close to a bunch of balls, but ultimately coming up empty and looking awful in the process:

After the game, reflecting on their failures as St. Louis celebrated, they looked more like this lady:

(The dollar bill is because they have a high payroll.)

In the end, it doesn’t matter that Kershaw allowed seven runs instead of six or or five or four, or that the Dodgers finished nine runs behind instead of losing by any other margin. Wacha was amazing again, Carlos Martinez and Trevor Rosenthal picked up where the NLCS MVP left off, and the Dodgers never mounted a serious threat. The Cardinals deserved to win, and the Dodgers deserved to lose. That makes the hypotheticals moot.

But final scores can be deceptive, so it’s worth remembering how easily a catastrophic outing for Kershaw could’ve been okay. That sequence of singles that seems so inevitable in the box score is really just the output of a single simulation, the only one we can see. The Cardinals, of course, have had games like this all season, which is how .330 team averages with runners in scoring position happen. They’re a well-constructed, talented team that’s also had some balls bounce their way. That’s the type of team that wins pennants.

You need to be logged in to comment. Login or Subscribe
oakwcj
I don't think Yadier Molina was catching Kershaw last night.
Reply to oakwcj
lyricalkiller
Mistakes were made; corrections, too.
Reply to lyricalkiller
rawagman
I really enjoyed the way Wacha pitches. He doesn't dither. Get ball from Molina and throw again. I think the Dodgers hold have tried to stall him and rob him of some momentum. We'll see if the Red Sox/Tigers can learn from the mistakes of the Dodgers.
Reply to rawagman
Robotey
Great breakdown; looks like Ellis may have been screened by the 2nd base ump on Beltran's single, no?
Reply to Robotey
buckgunn
Good eye! Looks like it to me but I hadn't noticed that. Great piece, Ben. It's astonishing how MANY things went the Cardinals' way in those 2 big innings - about as elegant a defense of Voros McCracken as any spreadsheet.
Reply to buckgunn
BigSteve
Should be noted that Robinson is like a foot shorter than Adams.
Reply to BigSteve