Two weeks ago, I looked at some of the factors that may impact "changeup" quality. When dealing with major-league pitchers, you are dealing with a rather select sample, so all results should be handled with care. In other words, this isn't a roapmap to pitcher development, but a single marker on the road.

Let's recap some of part one:

I thought that ground-ball rates would be less interesting than whiff rates, and left them out of part one, but the evidence suggests that I was wrong.

Let's put those together:

So, we've learned that a hard sinking changeup is a good thing. Shocker. We've also learned that the amount of tail on the pitch—on its own or relative to the fastball—isn't an apparent factor. Based on this analysis so far, it would seem that being both a bat-misser and a worm-killer is a neat trick. We'd expect the pitchers with both abilities to fit the model outlined above: big fastball, good gap to the changeup in speed and drop. On the other end of the spectrum, we'd find pitchers who neither miss bats nor kill worms with their changeups. Here's where we'd expect a small pair of gaps and a general lack of velocity. 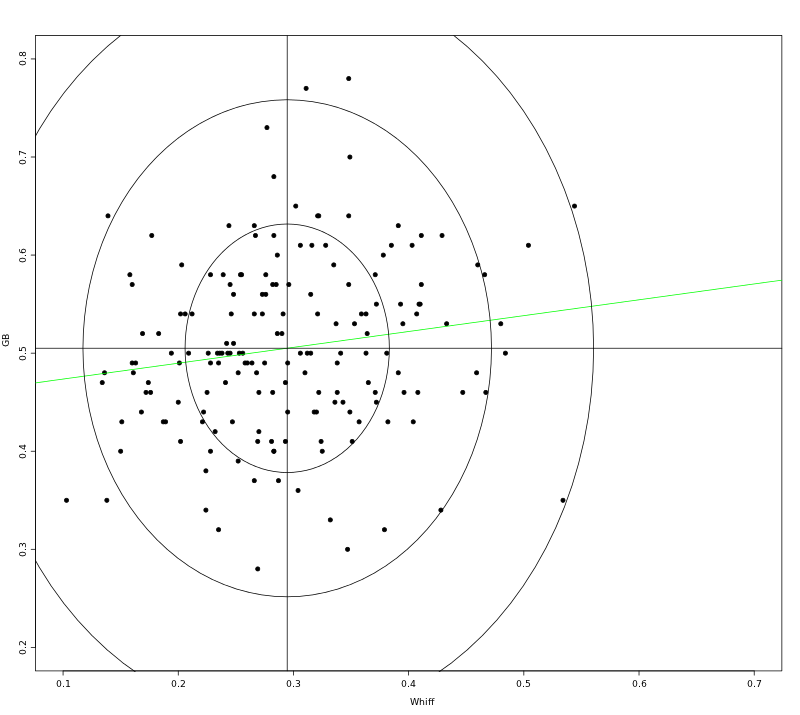 This complicated-looking chart shows ground-ball rate on the y-axis and whiff rate on the x-axis. The cross hair in the middle is the intersection of the two distributions' means. The rings are approximately one standard deviation (both rates have comparable if not nearly identical standard deviations around .088). The green line is the linear relationship between the two rates, which, as you can see, is mildly positive but not particularly powerful.

The tables below summarize the pitchers in two quadrants and include the "ring" of the chart into which they fall. The mean ground-ball rate is .505, and .295 cuts the pack in half for whiff rate. A summary of all four groups is shown before the top-right and bottom-left quadrant details. Reminder: the data covers 2011, 2012, and part of 2013.

Some extra details are included with the pitchers so you can reference the background on swing and chase rates in the first part of this series.

Note: The top five of Strasburg, Iwakuma, and Hamels can be considered a group of elite off-speed pitchers. I don't think anyone would quibble with that.

Note: "Bad" is a relative term, especially when referring to the guys in the lower "rings”; they're not far from average, and all of these guys are major leaguers. What's not even considered is how a changeup may set up something else (pitching backward) or whether some pitchers’ shaky changeups are even relevant.

This series was initially going to consist of three parts. To cover all the interesting details here, I might need five.

You need to be logged in to comment. Login or Subscribe
matrueblood
Apologies if I'm missing this. Reading in https format at work, can't see the graph, might be limited in other ways. But is home-run vulnerability addressed? Intuitively, I might think firmer changeups or ones with smaller gaps would result in fewer total flies, but harder-hit flies. Maybe that's silly. Just a question. I love this piece.
Reply to matrueblood
harrypav
it's a good question, I haven't looked into that...yet.
Reply to harrypav
jroegele
Nice work Harry! I noticed that at least in spring training/opening few weeks of the season, Derek Holland's changeup had a much larger velocity differential from his fastball than in the last couple of seasons. Has he moved out of the "bad" quadrant if you look at 2013 alone? (if you care to look at it....)

Holland's speed gap wasn't the problem, it's the movement gap...or lack thereof. He's actually getting less of a drop gap between the hard stuff and the change in 2013, although he may have given himself a little more of a speed gap.
Reply to harrypav
rgrunder
Great article.

I know he's had a limited body of work that would show up in your data, but I was a bit surprised not to see Julio Teheran on here, good or bad. As he worked his way up, a lot of scouts thought his changeup was among the best in the minors. Now, he seems to almost never throw it. Any idea why he's not using it?
Reply to rgrunder
harrypav
I wonder if he'll work it back in after he gets more settled with his slider and sinker additions.

He didn't make the cut-off for # of pitches thrown to be included here.
Reply to harrypav
ScottBehson
Great article.

Would it be possible to look at pitchers from the recent past with hellacious change-ups- Santana, Mussina (I know this is out of your current data set, but would be a cool 6th article)
Reply to ScottBehson
harrypav
good idea!
Reply to harrypav
mnsportsguy1
This. There was something special with that Santana change, i've never seen so many awful swings off one pitcher
Reply to mnsportsguy1
mattgioia
Who's the outlier in the bottom right with the insane whiff rate and low ground ball rate?
Reply to mattgioia
harrypav
Tim Collins
Reply to harrypav
NathanAderhold
Good stuff.

I'm surprised that Jered Weaver didn't make the cutoff for # of change-ups thrown.
Reply to NathanAderhold
adenzeno
Some of those pitchers seem to have a split rather than a true change. While I know that the Splitter woarks as an off speed pitch, it does behave quite differently than a regular changeup, be it circle, palmball or whatever...Is there any accounting for that? Love this stuff. I am a HS pitching coach.
Reply to adenzeno
harrypav
a very important question. It's a layer or two deeper than the current stage, but we're headed there.
The thing with offspeed stuff is every grip is different. You can see splitters fade (Fister) or changeups tumble (Cueto). Rich Harden threw (or throws) a circle-change that acts like a slider. People think it's his splitter sometimes, too.
So my philosophy is
(a) try and identify changeup vs splitter grips as much as possible; but
(b) group them together for high level analysis