Back when I was a community news reporter, editors were always stressing the idea that “everybody has a story.” Not everybody is powerful, or newsworthy, or “good,” but everybody has a story. And so it is with early-season leaderboards. Obviously they’re lousy for analysis and their lifespans are short, but they exist, if only for a few moments, and we should acknowledge that they existed, if only for a few moments.

Or, put another way, early season leaderboards are God’s way of showing us how much crazy ish is happening all the time and we don’t even notice it.

So, as we did last year around this time, let’s size up the early-season leaderboards with an eye toward those wonderful achievements that we’ll never remember but that we should.

Since his rookie season, Austin Jackson has been the hitter with too many strikeouts and an unsustainable BABIP. He has 2,000 career plate appearances with a .372 BABIP (the best, by a dozen points, of any post-war hitter), so sustainability is only a lingering anxiety in the very back of some of our minds. The strikeouts are more real, but not that stressful, even if, as his hitting coach admitted last spring, Jackson’s high-strikeout/low-power ways are traditionally “not a good combination.” But in 2012, after dropping the big leg kick, he cut his strikeouts by 50 from the previous season, and this year he’s on pace (LOL @ on pace) to cut that lower total all the way in half.

Last year, Jackson made contact on 81 percent of his swings. This year, he’s making contact on 93 percent of his swings. He’s not more selective; even though he’s seeing fewer pitches in the zone, he’s swinging at more pitches overall, though most of that increase is from being more aggressive in the zone. He’s just making more contact, both on pitches in the zone and on pitches out of the zone. Here’s a Detroit sports writer praising him without offering any specifics at all:

Of course, BABIP has shown a tendency to correlate negatively with contact percentage, so it'll be delicious timing if this is when Austin Jackson's BABIP finally drops 35 or 40 points like you always wanted.

It’s weird that I bolded Votto (whoop; just realized you can't tell I bolded Votto, because all the names are bolded; bleh.), because Votto is the most likely name on this list. But if I rephrase the list in the form of performance, he sticks out:

While many of these names aren’t the sort of names that end up on these lists, they have had the kind of performances that end up on these lists: singles, doubles, homers, etc. Votto is hitting only .317, he’s got all of three extra-base hits, and he’s the only player on the leaderboard with a slugging percentage lower than his on-base percentage. And while this particular line is unlikely to persist until the end of the season, if anything resembling it does, then Votto will make history.

There are 526 hitters since WWII who have had an OBP higher than their slugging percentage in a qualifying season. But most of those hitters are the kind you’re imagining: Luis Castillo, or Chone Figgins, or Jason Kendall. None, in fact, has ever done it slugging over .450, and none has done it with an OBP higher than .460. Richie Ashburn slugged .448 (and had a .449 OBP), and Eddie Stanky slugged .412 while reaching base 46 percent of the time. Just 17 players (one, Nick Johnson, since 1981) have done it while slugging at least .400. It’s super hard to have an OBP higher than .450, or .460. It’s hard to do it especially without getting enough hits to slug .450. Votto probably won’t do it. But in his past 250 plate appearances, including last postseason, he has a .484 OBP and a .417 slugging percentage. And he’s on his way this year.

It feels like usually there’s a weird triples leader in April, or at least a triples leader who has somehow hit four in his first eight games while nobody else has two, yet that guy ends the season with six. There’s no real interesting triples leader, but there’s Choo, who has been hit more than any NL team and as many times as any AL team.

Choo gets hit by pitches, not at a Carlos Quentin level but enough to have finished second, third, and eighth in the AL, with a career-high 17 in 2009. But he is, of course, on another level so far this year. Is it to his credit or to his ultimate sorrow? 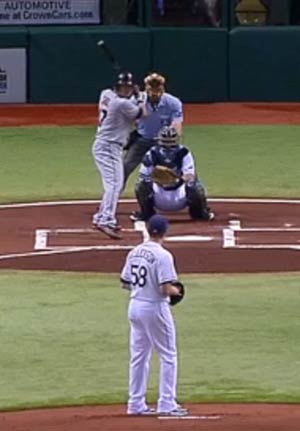 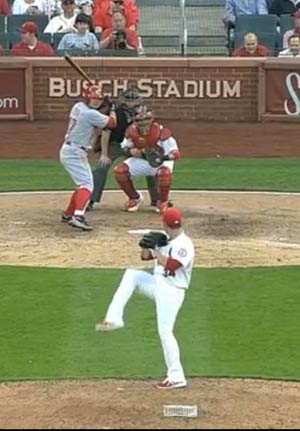 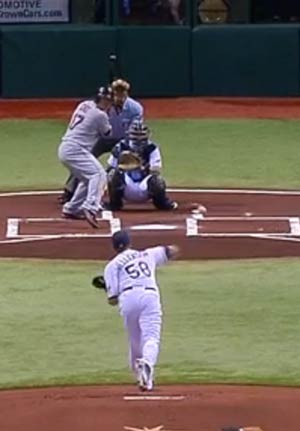 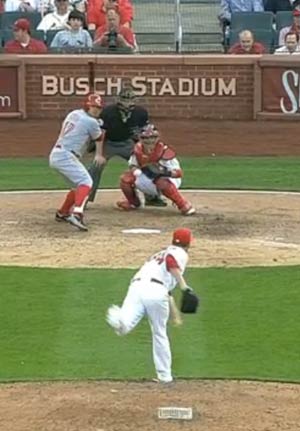 If anything it looks like he's moved slightly further away from the plate, so that's not the change.

Of the seven pitches he has been hit by, one was a hard slider that got him (against his will) on the foot 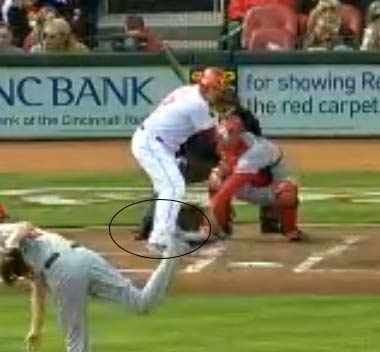 and one hit him on his unhappy back 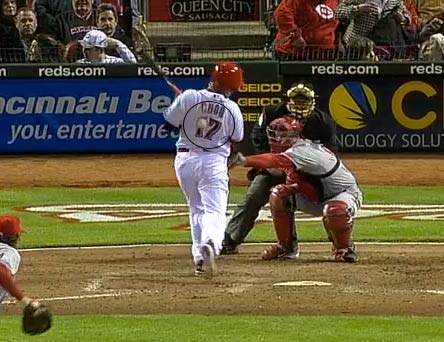 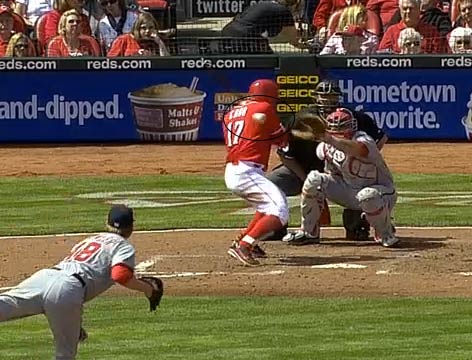 and this one hit him in the thigh but it looked painful and it doesn’t look like he could have avoided it: 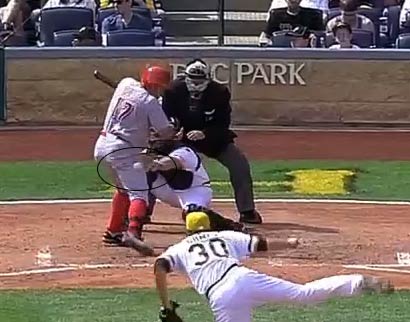 The other three were Choo’s choo-choo-choosing. Twice he stuck his thigh out to catch it on a soft spot 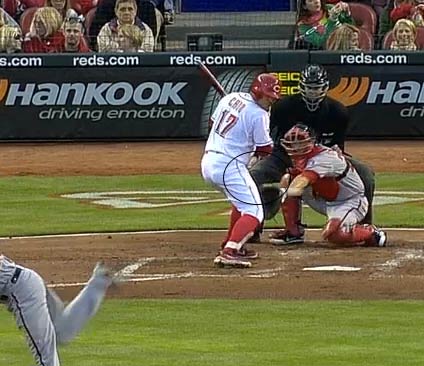 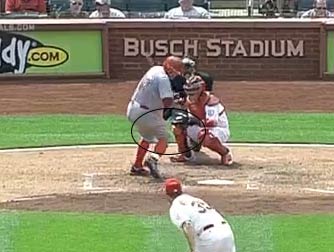 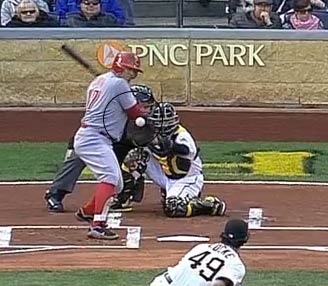 It isn’t as though he hasn’t dodged a pitch or two, too. (I'll spare you the GIFs.) But Choo’s spot at the top of this leaderboard looks plenty like a case of preparation meeting opportunity.

You need to be logged in to comment. Login or Subscribe
bheikoop
I watched the game when Choo broke his hand on a HBP and it was ugly. I can't believe he didn't change his stance a lot.
Reply to bheikoop
maphal
Ralph Wiggum.
Reply to maphal
aaronbailey52
Love the reference to bizarre triples leaders. So true
Reply to aaronbailey52