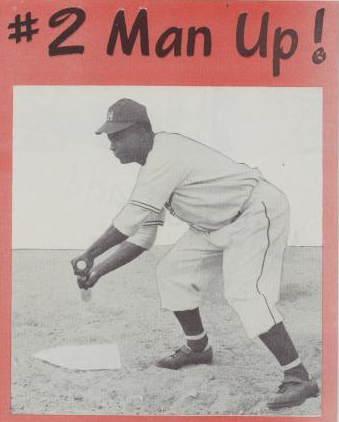 You know you've made it into the public consciousness as a role model when you've been featured in Boys' Life. In June 1948, less than a year after he won the inaugural Rookie of the Year award, the official magazine of the Boy Scouts featured an article by Brooklyn Dodgers' second baseman Jackie Robinson, the man who broke Major League Baseball's color barrier.

In the article called "#2 Man Up", the author is introduced like so:

Jackie Robinson made good with a bang in his debut as a Brooklyn Dodger. He led the league with 28 sacrifice hits, which indicates his team spirit and his prowess as a bunter. In addition, he outfooted all other speedsters with 29 pilfered sacks, and was second in runs scored with 125. After a slow start at the plate, he ran up a 21-game hitting streak, and finished inside the charmed circle of 20 best batters with a batting average of .296

In the first four and a half months of the regular National League campaign, Robinson laid down 46 bunts; of which 28 were sacrifices, 14 were beaten out for hits, and only four failed—this against major league teams. Small wonder that he was chosen as the Rookie of the Year in 1947. To cap it all, his sensational base running almost ran the champion New York Yankees out of the ball park in the first few games of their memorable World Series.

With his piece, "National League sacrifice hit champ" Robinson taught young American boys across the nation how to properly execute the most important tool of the number two hitter: how to lay down the sacrifice bunt. As Robinson put it:

The bunt is an important offensive weapon in baseball. Every player, whether he is on a professional, sandlot or school team, will have many occasions to use it during the course of a season's play. It is a particularly important skill when you happen to be the number two batter in the line up as was my case during most of last season, but, no matter where you bat you should learn how to do it correctly.

There was no man better suited for teaching this task than Robinson, who, as the introduction noted, dropped down 28 sacrifice bunts in 1947. He also reached first on an additional 14 bunts, with only four bunts failing to do anything worthwhile. With that kind of resume, what American boy wouldn't want to learn how to lay down the sacrifice (and show their team spirit) from Robinson?

In today's era, however, those numbers might not make the grade. The 28 sacrifice hits sound impressive—there have been only four seasons with more than 28 sacrifices since 1947, none since Jay Bell in 1991—but the 14 base hits translate to a 30% success rate (.304). In 2007, Dan Fox looked at current bunting success rates in "Dropping One Down". According to the article, the most successful bunters between 1959 and 2007 converted roughly 75% of their bunts into hits. Steve Garvey, in 75 career bunt attempts, made it to first 62 times (82.7%). Rod Carew, a much more frequent bunter, reached first in 151 of his 190 bunt attempts for 79.5%. On the flip side, Pat Listach was the worst bunter in terms of base hits over the era (among those with 50+ bunts). Listach reached first in only 15 of his career 57 bunts for a 26.3% clip. If Robinson's 14-for-46 rookie season were to fall on that list, it would come down at third worst of the modern era. [Clarification: Dan's research explicitly tries to remove sacrifice attempts from the equation, so this comparison is not valid.]

Of course, the comparison isn't exactly fair to Robinson. Not only was that list looking at career bunt rates rather than Robinson's one-year total, it was also looking at a very different era than the post-war 1940s. Combine that with the unique circumstances Robinson was in—did he get asked to bunt more often than other number two hitters that year? Was it because of his speed? Because the Dodgers wanted to make him look like a better teammate? Because no one knew what to expect out of someone who had been playing in the Negro Leagues?—and it makes it near impossible to judge Jackie Robinson dropping down a bunt against more modern players like Garvey, Carew, or even Listach.

Regardless, it isn't the value of Jackie Robinson's bunting that makes his appearance in the June 1948 issue of Boys' Life notable. It is that, for a nation facing such segregation and racism, Robinson was so quickly embraced by a magazine meant to appeal to the children of mainstream America. Jackie Robinson was a true role model and even the likes of Boys' Life recognized it less than 18 months into his career.

You need to be logged in to comment. Login or Subscribe
Michael
I wonder where the data about bunts comes from. Is it consistent across time so that Steve Garvey really was the best percentage bunter?
Reply to Michael
flyingdutchman
I don't get it. How many of Garvey's bunts were sacrifices where he nonetheless made it to first? Isn't this an important distinction? All of these bunts seem to be taken entirely out of context, so I don't see how these percentages can tell us much of anything.
Reply to flyingdutchman
LlarryA
Whoa whoa whoa, Larry. How is bunting success measured? If the 28 sac bunts were intended as sacs, then they all succeeded. If the 4 "failures" were intended for hits, then his success rate was 77.77 (assuming that the 14 hits were all intended as such and were not sac attempts that the defense couldn't play). If any of his sac attempts failed, that ups the success rate of his hits.

Note that Dan's methodology in the linked article involves " thereby excluding all successful sacrifices and most sacrifice attempts. This measure, however, still includes plays where a lead runner is forced out, and so is not "pure" in the sense of recording only attempts where the batter's intent was only to get a hit. In addition, there are attempts included where the batter attempted to sacrifice but ended up being credited with a hit. We'll have to live with these ambiguities, because if we exclude attempts with runners on, we'll also miss plays on which the batter was credited with a hit when the intent was to do so. However, bunts that result in force outs and attempted sacrifices that go for hits are both reflective of bunting ability, and should cancel each other out to some degree, so I've decided to include both in what follows."
Reply to LlarryA
lgranillo
You're right. Same with flyingdutchmen above. When I looked through Dan's article, I sped past the introduction to focus on the charts and I should not have done that. He explicitly tried to remove sac bunt attempts from the equation.

In fact, looking lower in the article at the base/outs situation, a 30% success rate for runners on 1st/2nd (which I assume is what Robinson faced in many of his sac attempts) is about normal. I should have read more carefully.

That being said, I really did mean the "comparison" as a bit of an aside. Since I had never seen bunt numbers from that far back before, I was curious how they stacked up against more modern baseball. It's why I mention that the comparison was "near impossible to judge". It was the article in Boys Life itself, and Jackie's acceptance as a role model, that I found most worth sharing.

Thanks for bringing it up, everyone.
Reply to lgranillo