I wrote an article last September in which I detailed the surprising pitching of the Oakland Athletics. The piece included a breakdown of four different A's pitchers, and I noted that many of the players shared specific similarities which reflected an organizational trend toward mechanical efficiency. The A's have a long history of successful pitching development, and the team's mechanical points of emphasis were apparent by looking at the tendencies of the players whom they had developed and/or acquired over the years.

I spent much of the offseason poring over pitcher mechanics and preparing over 100 mechanical report cards for the pitchers in the 2013 Starting Pitcher Guide in my first year working with Paul Sporer on his annual project. I had already watched the majority of these pitchers in the past, spread out over months or sometimes years, but the examination of so many pitchers over such a short timeframe revealed a number of other patterns that cropped up with pitchers from certain organizations.

It’s not always possible to assess whether a mechanical trend represents an actual point of instruction or just a quirk of small sample size, but some team-specific tendencies are so pervasive that Occam's Razor would conclude that the pitchers are following similar directions. The situation is similar to the one I experienced while researching last week's article on pitchers “Under the Gun,” in which I realized that the population of pitchers who have exhibited sustained velocity loss over the past two years also has a glaring tendency toward poor posture. I had already known that there was a theoretical connection between poor posture and long-term velocity loss, but the anecdotal evidence I uncovered implied a much stronger connection than I had imagined.

Posture is one of the easiest elements to see from a standard television feed, and a quick trigger finger can pause video of a pitcher at release point in order to ascertain how his posture compares to that of his peers. A pitcher with strong postural stability will have an upright spine at release point (with the head centered above the pitcher's center of mass), but a player with poor posture will exhibit severe spine-tilt near release point, with the head veering off center toward the glove side in the effort to generate an over-the-top arm slot. The velocity-dropping pitchers in “Under the Gun” included a plethora of players with excessive spine-tilt, as I demonstrated through a handful of side-by-side pictures.

One of those spine-tilting pitchers was Yovani Gallardo, the Milwaukee right-hander who received a 20 score for posture in the SP Guide thanks to a blatant manipulation in the effort to achieve a high arm slot. 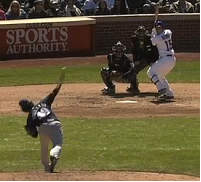 The other pitchers in the Brewers starting rotation didn’t fare much better. Breakout starter Mike Fiers appears to be a Gallardo clone in training, with spine-tilt that triggers early in the delivery. 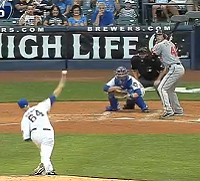 Marco Estrada did not receive a report card in the SP Guide, but his posture grade is well below average: 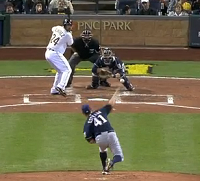 The trio of Gallardo, Fiers, and Estrada will man the top three spots in the Brewers rotation this spring, and the number-four slot could go to Wily Peralta, who debuted last season with 29 innings in the majors. Young players will often make major mechanical adjustments from year to year, but the evidence from 2012 suggests that the 24-year old is following the Gallardo path: 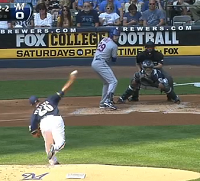 Some pitchers lack the functional strength to maintain balance and posture throughout the delivery, but the top four starters in the Milwaukee rotation clearly share a preference for arm slot above stability. In each case, the loss of posture represents an intended manipulation rather than a lack of functional strength. This can be ascertained by observing just how early the posture change takes place. Consider the following GIF of Gallardo:

Each of these pitchers was signed or drafted by the Brewers, with the exception of Estrada, who was drafted by Washington and then claimed off of waivers by Milwaukee in 2010. It remains to be seen whether the Brewers are instituting coaching methodologies that encourage an over-the-top arm slot at the expense of posture, or if they are targeting pitchers who already fit that profile, but the pitchers currently on the team are making a convincing case that there is an organizational philosophy at play.

Tampa Bay is another organization that appears to carry a particular philosophy with regard to pitcher posture, but the developmental stance of the Rays is slanted toward strong posture, maintaining balance, and using those elements as the keys to repeating the delivery.

The financial situation of the Rays requires them to find strategic advantages in order to remain competitive on the field, and they have placed an emphasis on those elements that are often under-appreciated, such as defensive positioning, catcher framing, and pitching mechanics. Take a look at the top four pitchers in Tampa's rotation: 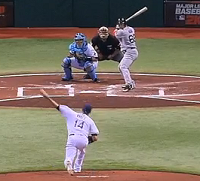 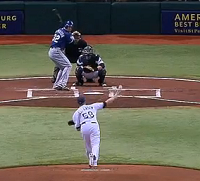 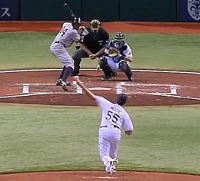 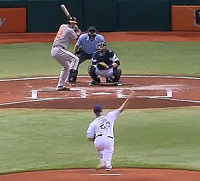 Each of the above starters has excellent posture with minimal spine-tilt, which allows them to repeat their deliveries easily and to find ideal extension at release point. That posture acts to extend the release distance for each pitcher, thereby increasing perceived velocity and creating later relative movement on off-speed and breaking pitches. For these pitchers, arm slot is dictated by their personal signature and the natural angle of elevation for the throwing shoulder, rather than a purposeful manipulation to secure an artificially high release.

Once again, each of these starters was drafted and developed by the Rays, allowing us to get a glimpse of their organizational approach to these aspects of pitching mechanics. The evidence continues to mount when we continue down the depth chart to a couple of other young hurlers who have successfully risen through the ranks of Tampa's system: 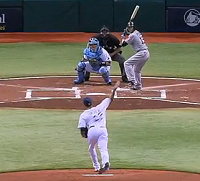 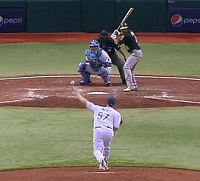 Both Archer and McGee exhibit above-average posture at release point, and McGee’s spine angle is particularly impressive considering the high levels of kinetic energy that he generates earlier in the delivery. The Rays led the American League in ERA by a healthy margin in 2012 and were third in the circuit in strikeout-to-walk ratio, and though we might be tempted to heap the credit on Jose Molina and his ball-strike manipulation skills, or hand-wave the ERA because of Tampa's league-best defense, it is also readily apparent that the Rays are doing something right with their young pitchers.

There is a stark contrast between the pitchers of the Rays rotation and those of the Brewers, with each organization adhering to a different mechanical philosophy. From the looks of it, Milwaukee is dedicated to an old-school approach that emphasizes downhill plane and creating difficult angles for hitters, as opposed to pitch efficiency and mechanical repetition. The Rays, on the other hand, are decidedly new school in their approach to the game, and the indicators point to an organizational emphasis on biomechanical efficiency, which allows pitchers to stay within the confines of their natural deliveries while creating a stable foundation to support both function and safety.

Without a doubt, the nuances of these respected development programs are far more sophisticated than what is demonstrated in this oversimplified example, but the differences between the two organizations are so stark as to allow us the opportunity to isolate these fundamentals in approach. As we gain an increased understanding of how each club approaches player development, we can be more accurate in our evaluations of how certain prospects might fit with particular organizations. Some teams might target pitchers who have an inefficiency that can be addressed in development, while others might prefer to identify pre-existing mechanical patterns that fall within the confines of their philosophical approach, but there is gold to be found in the details of how each team formulates its recipe for player development.

You need to be logged in to comment. Login or Subscribe
lipitorkid
Awesome as usual. I wish you could produce a two or three page summary of these myths or old-school vs. new-school philosophies with a short rationale. It's very difficult for me to convince youth coaches to read your entire book when they think they already know it all. Maybe a YouTube channel with a short video describing each fallacy with video examples.

PS= this article has made me pause slightly in my reaching for a few of those Brewer pitchers in my fantasy draft.
Reply to lipitorkid
renniquer
Would be interesting to see Guerrieri's posture now, and every year from now for the next few years.
Reply to renniquer
Behemoth
Following on from that, it would be interesting to look at the actions of pitchers drafted by these organisations and how these develop over the years.
Reply to Behemoth
craftylefty
Thanks Doug. As an O's fan I wonder if you've been able to gleen any guiding mechanical principles in their organization.
Reply to craftylefty
Behemoth
Oh, and just wanted to say that this is a really good article.
Reply to Behemoth
KerryHofmeister
Favorite thing on BP right now. Great work Doug.
Reply to KerryHofmeister
timber
I'm curious about Archer's posture pre-trade(s). This is his third season in the Rays system; he was drafted by the Indians in '06, traded to the Cubs in '08, then again to the Rays in '10. It would be interesting to look at tape of him in each of the other two organizations; it may give some insight into whether the Rays specifically teach this as opposed to drafting it.
Reply to timber
RJAnderson
Not to step on Doug's toes, but here's a screenshot of Archer at the point of release from 2010 (taken from the video ): Reply to RJAnderson
jsdspud
Doug, great article. Have you had a chance to look at any of the Pirates? I always wonder if their development staff has the ability to turn Cole and Taillon into big leaguers. Then I read where guys like Kyle McPherson and Phillip Irwin have really improved since being drafted.
Reply to jsdspud
Chucko
These articles are so impressive that I'm already pre-bummed about your doubtless eventual departure to a MLB front office. Promise to send us postcards?
Reply to Chucko
migueljsteele
This is excellent reading.
Reply to migueljsteele
jaireland
Great and informative, as usual. Thank-you.
Reply to jaireland
allthehardways
Fantastic work, I am really enjoying the analytical look at pitching mechanics that you have been doing on the site. One of my favorite things about BP right now.
Reply to allthehardways
BloodStripes
Totally awesome Doug. Your articles on pitching and your work on Pauls SP guide has taught us all a great deal.

I believe James Shields had poor posture. Wonder if that had anything to so with why they traded him.

On a side note, could you please do an article on the Padres and what they are doing organizationally developing pitchers? Casey Kelly is now headed under the knife. That's a lot of TJ injuries for the Padres over the last two years.
Reply to kcheaden