Kyle Drabek doesn’t throw strikes well. He finished fifth in baseball in 2012 (minimum 40 innings pitched) in walks per nine innings—that is, the fifth-most walks, not fifth in the good way—and fourth the year before that. (He has done this despite never intentionally walking a batter. “Eh, this’ll take care of itself,” his manager might figure.) He has thrown 20 wild pitches in 167 career innings; 20 wild pitches would have been enough to lead the American League in every post-Wild Card season except for one. His median pitch misses the center of the strike zone by about 15 inches, which looks like this: 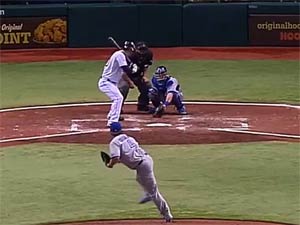 And in 2012, according to our measure of the strike zone, only one pitcher* threw fewer pitches in the zone than Drabek, who missed 62 percent of the time.

That one pitcher is Jared Hughes, who missed the strike zone 64 percent of the time and whose median pitch also misses the center of the zone by about 15 inches, which in his case looks like this: 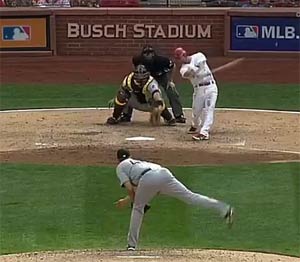 Very similar pitch location. You’ll note, though, through no connivance on my part, that Drabek’s pitch was taken for ball four, while Hughes’ pitch was swung on and missed. These are only two of many, many outcomes that each pitcher has had on such pitches, but they are serendipitous for the purposes of this piece. Because while Hughes throws even fewer pitches in the strike zone than Drabek, he is nobody’s example of a wild pitcher. He walked just 2.6 batters per nine innings in 2012, which ranks in about the 65th percentile of all pitchers**. Four of those walks were intentional, to boot.

This isn't the only surprising result of a comparison between pitchers' walk rates and percentages of pitches thrown in the zone. Zack Greinke threw fewer pitches in the strike zone than Ricky Romero, which is actually the pairing that led me to this topic. Edinson Volquez threw more pitches in the strike zone than Hiroki Kuroda; Volquez had the 14th-highest BB/9 rate in baseball, while Kuroda was 306th. Here’s the best one: Jonathan Sanchez threw more pitches in the zone than Jeff Francis. Sanchez had baseball’s highest walk rate. Out of 367 pitchers, Francis was 343rd.

But anyway, to restate what I’m talking about here:

Let’s find out where all those wayward pitches went.

There are, near as I can tell, five basic ways a pitcher can throw more pitches out of the zone while walking fewer batters:

Regarding Hughes and Drabek:

2. Hughes actually induces less contact than Drabek;
3. His pitches don’t, on average, miss (at least the center of***) the strike zone by less;
4. Hughes does seem to be more cautious/wasteful when he’s ahead in the count, missing the center of the zone by about an inch and a half more than Drabek does on 0-2 pitches;
5. But Hughes also is more likely to miss the zone when he’s behind in the count (at least on 2-0).

It is the first possibility, that Hughes gets more batters to chase, that provides the overwhelming bulk of the explanation.

So Hughes induced 90 more strikes by being seductive; Drabek collected 90 extra balls by being unconvincing. Hughes and Drabek faced about the same number of hitters (one more for Drabek), and Drabek walked 25 more batters. If we do the simplest thing imaginable and just divide Drabek’s 90 extra balls by four—I know, but I'm pretty sure I saw Tom Tango do this once—it explains 22 of those extra walks. So that’s it. Hughes gets more swings on pitches outside the zone.

In fact, Drabek gets fewer swings on pitches outside the zone than all but 30 other pitchers*. Those 30 are a who’s-who of walk machines: Daniel Bard, Carlos Marmol, Ubaldo Jimenez, Carlos Zambrano, Sanchez, etc. Meanwhile, in 2012 Hughes had—by actually a good margin—the highest swing rate on pitches outside the strike zone*. Mock Tim McCarver all you want, but when he said (repeatedly) during the postseason (over and over again) that the key to pitching is throwing strikes that look like balls and balls that look like strikes, he could have been talking about Jared Hughes, and about Not Kyle Drabek.

What Hughes throws is a low- to mid-90s sinker, roughly 80 or 85 percent of the time. (He has a slider that’s not hot. He has a four-seamer that he throws occasionally, and that PITCHf/x has a bit of difficulty differentiating from the sinker.) He’s a big guy, 6’ 7”, and after the Pirates took him in the fourth round of the 2006 draft he didn’t do much. As a starter, he spent two seasons in A-Ball, then after a year in High-A he spent almost three full seasons in Double-A. Finally, the Pirates moved him to the bullpen and moved him to Triple-A. Ironically, the advice that he says helped turn him around:

Two words — a familiar high school football cheer — helped Jared Hughes find the form that made him a major league pitcher: Be aggressive.
It was 2011, and Hughes earned his first call-up to Class AAA Indianapolis, a move that put him in the bullpen on a permanent basis. There, pitching coach Tom Filer and manager Dean Treanor encouraged Hughes to be aggressive with his sinker and attack hitters.
"That kind of rubbed off on me," Hughes said. "I got way more aggressive, got the ball down, and that helped me become a better pitcher."

“I try to make it as straight as possible,” he said. “If I throw it straight, that’s good, because at the very last second it’s going to move just a little bit. You don’t want it to move early; you want him to think it’s going to be straight and then at the very end have it drop.”

Hughes, by the way, is a reliever on the Pirates. Gosh, I just spent all this time writing about Jared Hughes.

*minimum 1,000 pitches; using our sortables; 257 total pitchers
**minimum 40 innings; 367 total pitchers
***using "distance from the center of the strike zone" as a proxy for wildness introduces some complications, as a pitch can be a foot from the center of the zone and be clearly a ball or it can be a rulebook strike, low and away or up and in. But in this case the lack of precision takes a back seat to ease of calculation, and isn't, in my view, likely to lead to false conclusions.

You need to be logged in to comment. Login or Subscribe
hotstatrat
Fascinating. I hope you continue this analysis with Francis and Sanchez and some of the other pairings.
Reply to hotstatrat
rgbauer
Great piece. As you say, the point seems obvious in hindsight, but the mantra of pitching coaches - and frustrated fans - who see their pitchers walk too many batters typically is, "Throw strikes, dammit!" When you think about it, though, unless the pitcher has the stuff of Justin Verlander, he is likely to get shelled if he throws everything over the plate.
Reply to rgbauer