Writing that Kyle Drabek is no stranger to great expectations oversimplifies things. Drabek is the son of one Cy Young award winner, and he was traded for another before he had thrown a pitch in the majors.  Those bloodlines are invaluable in baseball. Good genes can ensure athleticism, yes, but they can also prevent a player from wilting under the hot stadium lights. The physical stuff is easy for Drabek—his hammer curve, and a fastball that can touch the mid-90s, can get big-league hitters out, thanks for asking. The mental stuff is supposed to be, too—scouts labeled him a bulldog multiple times during last spring; this tells you about his mindset (and excuses his occasional barking at hitters). Yet last season, both the physical and mental parts of Drabek fell apart.

For a time, Drabek made pitching in the bigs look easy. His first start in 2011 was a one-hitter spread over seven innings against an incumbent division winner. He would allow four runs over his next two starts. From that point on, Drabek met the wrath of major-league hitting. He would complete 60 more innings as batters hit .314/.416/.508 against him; Joey Votto, your sixth-place finisher in National League MVP voting, hit .309/.416/.531 last season. Back to the mental part of baseball: the idea is that failing in baseball is unavoidable and difficult. You need to be cut from a special psychological cloth to persevere and, more importantly, to adjust. In summation: failure is nature’s best educational tool. Drabek took this lecture seriously and spent the offseason working on his mechanics. Shi Davidi chronicled Drabek’s transformation:

"We found out during the season I was stepping across my body quite a bit and that didn’t allow me to reach my glove-side fastball, outside to a righty, very well," Drabek said Wednesday. "That was one of the things over the off-season we talked about and I worked on it a little at home by myself.”

He had a tendency when he got to the top of his balance point, to have his weight shifted to his heels. It created a bit of a back arch, so when he came out of his delivery to the point of his landing, his head was off line a little bit. He’d get inside the baseball and that’s why you’d see a lot of those fastballs missed up and in to right-handers or up to his arm side. As he’s repeated that one delivery, that’s allowed him to establish a release point that has been much more consistent as has the overall strike throwing ability.

The Jays television broadcast flashed an overlay early in Drabek’s most recent start. The stat of choice was Drabek’s strike percentage in 2011 and 2012. Both rates were identical at 55 percent. One statistic alone doesn’t make Drabek’s work worthless. In fact, there has been a tangible shift in his pitching. The images below show Drabek’s fastball location by strike zone quadrant over the past two seasons. These images include each of Drabek’s fastballs and are separated only by the batter’s hand: 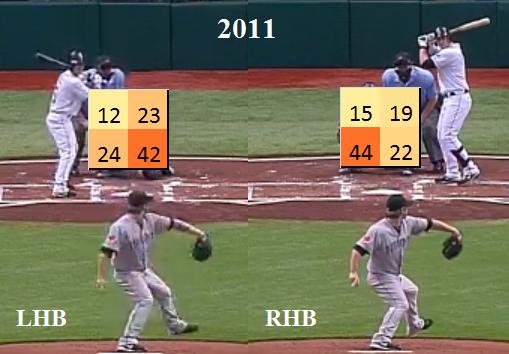 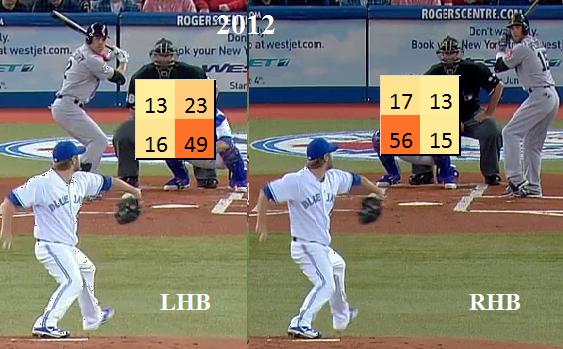 If actions speak loudly, Drabek is feeling more comfortable throwing his fastball glove-side to right-handed batters. It seems as if Drabek has taken on a religious-like devotion to pitching down and away to all batters; generally a productive strategy. There is a problem, however, and that stems from the results. Drabek’s ball rate has barely improved going glove-side low on his fastballs (44 percent instead of 45 percent; the league average is 10 percent lower). What Drabek has improved is throwing strikes arm-side low (from 39 percent to 32 percent). To ask the obvious question: at what point does Drabek ditch going glove-side so often in favor of throwing arm-side?

Alan Ashby, one of the Jays commentators, provided a good line of questioning during the game.  After noticing that Drabek had fallen into his old habits, Ashby asked if the youngster was doing enough throwing in the bullpen and on the side; citing Greg Maddux and his two throwing sessions between starts instead of the customary one. In lieu of Drabek’s inability to find the strike zone (he walked the bases loaded in the first), Ashby asked if missing low, otherwise known as “missing properly”, was any better than missing anywhere else.  There aren’t many answers to offer Ashby, but referencing Maddux, particularly given Drabek’s struggles to locate down and away, makes a lot of sense.

Maddux once said, "You know what makes you smart? Locate that fastball down and away. That's what makes you smart." Drabek is the high school kid who accidently drops his copy of Ulysses at the feet of his English teacher. He wants to appear smart, but for now he in over his head. There is some good news. Drabek is just 24 and has fewer than 30 major-league starts under his belt. His stuff is good enough to get big-league hitters out, which is as reassuring as his mechanical woes are worrisome. It’s possible that Drabek will need a total reconstruction of his delivery before he can harness his physical gifts. That doesn’t mean Drabek can’t live up to those great expectations. After all, remember what the Jays did with … oh, forget it; the kid doesn’t need more pressure on him.

You need to be logged in to comment. Login or Subscribe
BillPetti
Good stuff, R.J. Do we know if the differences from 2011-2012 are significant yet?
Reply to BillPetti
RJAnderson
Statistically significant? I'm not sure. I don't even know if it's possible to quantify that since this is up to the pitcher's discretion. He could go back to his old approach from here on out and this piece would look silly, but that doesn't necessarily mean we all fell victim to a small sample.
Reply to RJAnderson
Leg4206
How is ball rate calculated? If the ball ends up low and away, do you assume he was aiming for a low and away strike, and similarly for the other three zones?
Reply to Leg4206
RJAnderson
You mean the location charts? Those are just where the pitch wound up. It's not the perfect measure (for reasons you stated), but I'd like to think it captures intent a good deal of the time.
Reply to RJAnderson
SaberTJ
Loved this article R.J.
Reply to SaberTJ