There was a pretty good chance the Giants were going to lose on Tuesday. As you’ll recall, they had one hit through nine innings; they drew one walk; they scored because of a passed ball and an error; etc. They could have very, very easily lost on Tuesday. And if they had, Tim Lincecum’s season highlights would have looked like this:

It would have been a totally lost season. Giants fans would have moved on from “What’s the matter with Timmy” to “What do we do with Timmy.” Brian Sabean would have picked up pretty ladies at bars by bragging about the time in 2011 when, like a boss, he managed to avoid signing Lincecum to the seven-year deal that everybody wanted. Lincecum would have gone into the spiraling descent that top athletes go into when everything goes wrong so quickly, and when more and more extreme fixes seem like the cure.

The 67 ERA+ is permanent. Tim Lincecum will end the season with a 67 ERA+. And yet, because the Giants’ season didn’t end Tuesday, Lincecum got another chance. If the Giants keep winning, and if Lincecum doesn’t do anything to screw this up, by golly he can turn this whole thing into a success. It’s almost cooler this way. This way, it’s not just Timmy being good at pitching. It’s Timmy figuring out how to get it done, even though he’s not.

So the question is this: Is Bruce Bochy some kind of genius? When he left Lincecum out of the rotation, in favor of Vogelsong and Zito, the statement seemed to be that he wanted Vogelsong and Zito to pitch instead of Lincecum. But Lincecum ended up throwing more innings than any Giants pitcher except (presumably) Cain. Was this the plan? Probably not exactly, but Lincecum’s value as a reliever is higher than Zito’s value as a reliever, and that’s not nothing. Lincecum’s value as a starter is probably higher than Zito’s value as a starter, too, but, gosh, you could forgive Bruce Bochy for giving up on that faith after six months and one week.

Bochy did manage to keep his faith in Zito. The first chance he had to remove him was before the game, when somebody in the Giants’ IT department slipped him a memo pointing out that Zito’s FIP was 4.53, pretty lousy and worse than Lincecum’s. Bochy passed. Then in the first, when Zito walked three batters and forced in a run, Bochy stuck with him. He didn’t pinch-hit for him in the top of the second. He didn’t remove him when Joey Votto came up with two runners on in the bottom of the second, and he didn’t remove him after a lead-off home run in the third. I was noting all these opportunities to myself because I was fully convinced that Zito was going to somehow survive into the sixth inning and ugly his way to the win. Perhaps Bochy was, too, but he was rewarded instead with the following line: 2 â…“ inning, four hits, four walks, two runs, both earned. Zito had a chance to clinch the NL West in 2010, and he had a chance to stave off elimination on Tuesday, his two biggest starts as a Giant. In both games, he was terrible. He was always terrible, but then when it mattered he was also terrible. Sort of the opposite of Tim Lincecum this week.

So that’s probably that. Unless Bochy decides he can’t do without his new bullpen ace, you’d think he’ll put Lincecum into the rotation for any future series. If the Giants make the World Series, Zito might not even have a spot on the roster. Again.

**
I don’t want to make too big a deal out of the difference between Bochy’s decision to pull Barry Zito and Dusty Baker’s decision to not pull Mike Leake until the fifth. It’s not like Bochy was quick on the draw and kept Zito from imploding; Zito was essentially imploding from the first pitch, and with a little tweak of sequencing could have buried the Giants. But Leake came into the start dragging along no fewer questions than Zito did; and the Reds, despite not having a Lincecum-type long reliever ready to go, have a deep and extremely effective bullpen. But Leake was given a longer leash and got himself tangled in it. That, ultimately, was the difference between a lousy starter giving up two runs (Zito) and a lousy starter giving up five (Leake).

Dusty Baker was interviewed during the game. Here’s how it went.

That’s how quickly it went bad.

***
Lincecum threw 55 pitches, 41 of them for strikes. That’s a 74 percent strike rate, which blows past his previous season-best of 69 percent. He threw 15 sliders; 14 of them were strikes.

Now Mat Latos against Matt Cain. Latos denies he has or had the flu, no matter how many times you heard it and read it.

"I never had the flu," he said. "Whoever tweeted that is an idiot."

"He's OK. Everybody said he was sick, but it's a matter of him having allergies, just like I have and a lot of people in the Ohio Valley have here," manager Dusty Baker said. "Mat is Mat, you know what I mean? He's OK."

"Mat is Mat, you know what I mean?" Honest have no idea what he means. But whatever, good news for the Reds. 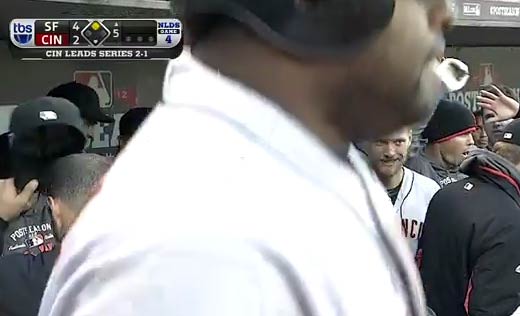 The Reds are still going to win, even if Sean Marshall and Aroldis Chapman have to pitch three innings apiece. Dusty Baker sure doesn't want to get a reputation for blowing huge post-season leads, after all.

You need to be logged in to comment. Login or Subscribe
Scartore
Yeah, just about everybody in the QC has a touch of sniffles right now. Something in the air when the fall weather sets in.

BTW, I am scared senseless right now. If the Reds lose this and the @#$%ing Cardinals advance I am going to freaking plotz.
Reply to Scartore
Screamingliner
"The Reds are still going to win ..."

In the immortal words of Ron Fairly, "Check that."
Reply to Screamingliner