When I was a kid, I broke my collarbone. Doctors told us that bones that break tend to grow back even stronger. “You are not broken,” the doctor might have said, as if he were merely a narrative device to be used many years later, “you are getting structural reinforcement!”

Man does that sound like a scam, but here we are in September, and look at Buster Posey. As I write this, he has a 170 OPS+. (If it goes down this weekend, I will probably leave it as “As I write this.” If it goes up, I will update it with the higher figure before publication. Pro tip!) A 170 OPS+ is insane. Mike Trout has a 170 OPS+. Remember how good Mike Trout is? And he’s only 21? Buster Posey is not 21, but he is a catcher. As you know, “And he’s only 21” and “But he’s a catcher” are extremely close to each other on the Factoid Scale:

Yes, it’s an amazing season, and it’s an 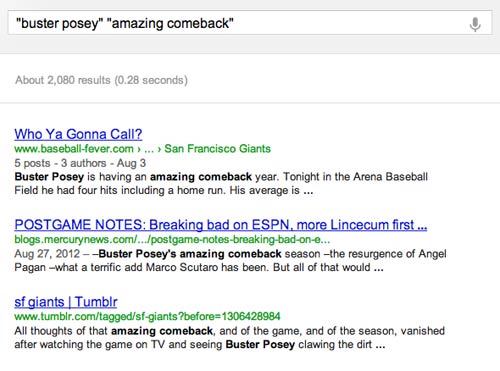 but it’s also probably not as shocking as we might think it is. Baseball players get hurt a lot. But—excepting pitchers—they also heal, with remarkable reliability.

Here’s part of what we wrote about Posey in the 2012 Annual:

In 1936, 25-year-old Hank Greenberg broke his wrist in a collision at first base and missed the rest of the season. The next year, he drove in 183 runs. In 1968, 24-year-old Joe Morgan tore the ligaments in his knee and missed all but 10 games of his age 24 season. He credits the time on the bench, studying pitchers, with teaching him how to steal bases. And in 1974, Carlton Fisk tore knee ligaments in a home plate collision; they said he would never play again, but 16 months later he hit his Game 6 home run, and about 100 years after that he was still playing. Injuries aren't just a part of baseball, but a part of most Hall of Fame careers. All seems ready for (Posey) to be the Giants catcher in 2012, which puts him on track to start for the National League on July 10.

Fisk’s case, it should be pointed out, seems to be overstated, at least according to a review of the contemporary accounts. While Wikipedia’s airtight reporting says “Fisk was told he would never play again,” newspaper stories at the time quote Fisk saying he was periodically worried about his future after the collision, with his doctors reassuring him otherwise. "At first, I had doubts about my career, but the doctors tell me I'll have full flexibility,” he says in one article. "The doctors have been very encouraging. They point out I'm 26, so the longevity factor is on my side,” quotes another.

But his return wasn’t easy, either. He returned to action in spring training the following year and promptly broke his arm. That delayed his squat for another three months. Even with that extra time to recover, Fisk was in a lot of pain after he took back the catcher’s job in June 1975, almost exactly a year after the collision.

"Frankly, I'm really disappointed. I didn't think I'd have any problems. Everything went so well this winter, but now things seem to be going backward. It's still pretty sore. It's also a little swollen.”

Twice Fisk stood up, grimaced and limped around. Once he was at bat. The other time was on a throw to second base on a steal. "I'm throwing too much with my arm and not enough with my body," he said. "I think the knee still bothers me when I make a move in any direction."

Fisk’s injury was, of course, different from Posey’s. All injuries are different from all other injuries, even when they’re the same injury, and Posey’s and Fisk’s injuries weren’t the same injury. Posey’s injury isn’t  the same as the elbow injury that forced Kelly Johnson to miss all of 2006, or the biceps injury that cost Mo Vaughn the 2001 season, or the labrum tear that put Mark Ellis out for the 2004 season. But all those injuries are notable in that all those players came back at something like full strength, which seems to be the norm.

Here are 13 positions players since 2001 who got at least 200 plate appearances in a season, then missed all of the next season, then returned. (It’s not a list, of course, that would include Posey, who didn’t miss a full season. But it gives us a range of injuries and an even higher bar for severity.) On the left is how they did in the season before the absence; on the right, the season after:

That chart oversimplifies things: some of these players’ pre- TAvs might have been artificially low because of untreated severe injuries; some of the effects of the injuries might have shown up in the longer term; the parameters narrowly exclude Jesus Flores, whose recovery from a foul-tip shoulder injury has been depressing; etc. But at least it gives us a very general guide to ballplayer injuries: they suck, they take a while to heal, they can go bad, but they don’t, as a general rule, cost players their talent.

That’s not to diminish what the injury meant for Buster Posey. For him, it was a humongous thing, and for him the comeback was a spectacular effort. But for our purposes, Buster Posey outperforming the rest of the National League’s catchers this year should be no surprise.

Outperforming his 90th-percentile PECOTA projections, on the other hand, is.

You need to be logged in to comment. Login or Subscribe
hunterfelt
This is a really great article.
Reply to hunterfelt
sharksrog
There was true concern among Giants fans about how Buster Posey would bounce back from his injury. I would say he has outperformed virtually everyone's expectations, and many expectations by a large amount.

Not just batting numbers, but games played behind the plate. The one concession the Giants are having Posey make is to no longer block the plate.
Reply to sharksrog