After 252 interleague games, we have a final tally for 2012: AL 142, NL 110. That's a .563 winning percentage for the AL, which translates to a 91-win pace over a 162-game season. The AL has now taken the NL's lunch money in interleague play for nine consecutive seasons.

Here's what the AL's yearly winning percentage has looked like since the start of interleague play: 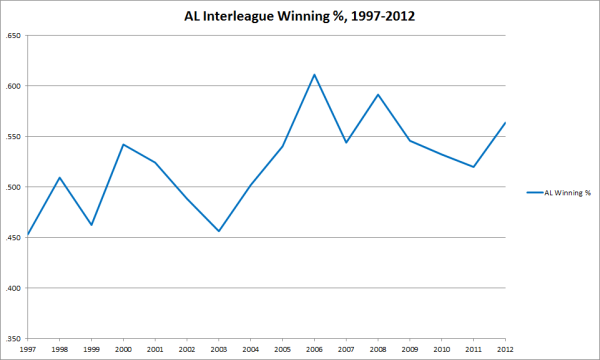 Several reasons have been proposed for the AL's recent run of success—this summary by Justin Inaz is a couple years old, but it still pretty much covers it. Regardless of the factors responsible for the 21st-century swing toward the AL, league strength is cyclical, and neither league is inherently superior, at least to the extent that the AL has been lately. The NL outclassed the AL over the first seven seasons of interleague, and it will again. We're just not sure when.*

*Though dumping the Astros on the AL next year won't hurt.

AL teams have FIVE of the top 6 payrolls. Yes, also 5 of the top 10 if you slice it that way. But look at the difference between AL teams and NL teams (even excluding the Yankees). Boston and Philly are a wash, but the next 3 teams spend a lot more than the NL counterparts. Hell, even further down the ladder: the lowly Minnesota Twins spent more than the New York Mets ($94m vs. $93m).
Reply to sam19041
delatopia
If you ran this article over at ESPN, the comments field would be filled immediately with NL fans steadfastly proclaiming the Senior Circuit the stronger league by virtue of having won more World Series lately. It's astonishing how many people think seven games in October outweighs 252 games over the course of the season.
Reply to delatopia
momansf
I have always been curious how hitters filling in as the DH slot on NL teams in interleague play compare to their full-time counterparts in the AL during that time. Additionally, do the slash lines for pitchers in the different leagues differ greatly?
Reply to momansf
bornyank1
Can't think of a reference for your first question off the top of my head, though I think I remember reading that the AL designated hitters are superior.

As for the second question: Tom Tango wrote something about that recently. NL pitchers hit significantly better than AL pitchers, most likely because they get so much more practice.
Reply to bornyank1
BillJohnson
I looked at this recently, and found that AL DHs have an OPS almost 75 points higher than NL DHs.
Reply to BillJohnson
BillJohnson
Oops, hit the return too soon. That difference is not restricted to ABs during interleague play, however. It's the whole season's OPS for the aggregate of AL DHs, compared to OPS only in interleague play (obviously) for the NL ones. The difference is quite large compared to season-long OPS differences at other positions, which tend to favor NL players on average, usually by 15 points or less. Note that AL pitchers OPSed .292 (as of five days ago) to .320 for NL pitchers over the whole season.
Reply to BillJohnson
jjaffe
I looked at the DH issue in great detail back in March (http://www.baseballprospectus.com/article.php?articleid=16178) using the more context-sensitive True Average. AL DHs have consistently outhit NL DHs despite the latter having better hitters in that role; AL DHs have put up TAvs in the .269-.281 range since interleague began, while the NL average is .258, well off what those players hit when they're otherwise deployed. That's an issue both of roster construction - not having an extra above-average hitter on hand - and a lot of those players being at something less than 100 percent when taking on DH duties.
Reply to jjaffe
lifeonmars
Do you have home/road splits for interleague play? I believe the AL has always won a higher percentage of games in AL parks than home field advantage would dictate.
Reply to lifeonmars