In my last article, I explored the rich subject of pitch velocities. I tried to isolate the many factors influencing speed, from weather, to PITCHf/x calibration issues, to in-game situations.

One of the things I noted was that pitchers tend to throw (slightly) harder with runners on than they do with the bases empty. I had expected the contrary, since the full windup delivery should give the hurler some extra power. However, I reasoned that pitchers might reach back for something extra when they are in a tight spot, thus (more than) making up for the deficit due to the set position.

That article was mainly focused on making comparisons between speed recordings possible, so the extra effort issue was not explored in greater depth. Later, after a conversation with Ben Lindbergh (a six-time-zone difference does not constitute a big barrier to chatting when one of the two guys is usually awake at 3 a.m.,) I decided to reach back for that little something extra myself and revisit the subject.

So, today’s questions are: Do pitchers try harder in certain situations? And if so, which ones, and how much harder?

Pitching in a tight spot
A couple of weeks ago, I noted that pitchers throw a mere 0.2 mph faster when runners are on base. Such a small difference could be the byproduct of chance and was worth noting only because a difference in the opposite direction was expected due to the aforementioned full windup versus set position issue.

Let’s see in more detail how pitchers react to the inning state by looking at their speeds in the well-known 24 base/out situations. Also note that while a couple of weeks ago I considered all the pitches in my analysis, this time I focus only on fastballs (four-seamers, two-seamers/sinkers).

Some quite interesting results are in the table above.

First, pitchers start the inning off easy. In fact, no base/out state shows a negative value. Why is that? Are they too relaxed because they haven’t put anybody on? They should be even more relaxed with nobody on and one or two outs. Do they have to find their rhythm again following a rest on the bench, while their teammates were trying to score runs? I tried to look at speed difference by time spent on the bench during the offensive part of the inning, hoping that might shed some light on the issue, but I found no correlation between fastball speed in the first at-bat of the inning and time spent resting while the team was hitting.

Second, pitchers increase their fastball speed as they put opponents away. I don’t know why that’s the case, but look again at the above table: there’s an increase in every single row.

Third, pitchers throw harder the more crowded the bases get. The relationship is not as seamless as the one with number of outs, but if you scroll down the three columns, you will see steady velocity increases.

The numbers here are easier to interpret, as one would certainly expect the pitchers to max out their effort in tough spots.

I also tried to run a separate model, removing the base/out situation and replacing it with the Leverage Index, which captures the importance of the situation more in depth by also incorporating information about the score and the inning. However I did not find any increase in fastball speed to be associated with an increase in Leverage Index.

The explanation, I believe, is that pitchers do not reason like this: “The bases are loaded, but hey, we are up 7-0 in the bottom of the eighth, so I can relax.” They are always on the mound to prevent runs from scoring, be it because of their competitiveness, to keep their ERA low for their next contract negotiation, or for making their case for an upgrade in their role in the bullpen or the rotation.

The ball/strike count
Last time I also noted that pitchers throw slightly harder when they are one strike away from retiring the batter, while taking it easier on 3-0 counts and on the first pitch of each confrontation.

Again, let’s go into more detail by looking at all the counts.

Let’s try to make sense of the above numbers.

The 3-0 figure is easy: pitchers are just trying to groove one down the middle for a free strike, assuming the batter is not swinging.

All the two-strike counts feature a difference close to one mile per hour. Are the pitchers going harder because they see the finish line beyond that particular batter? Or is it that since the pitch is not required to be pinpointed, they can afford to sacrifice precision for velocity?

I lean toward the latter. Conversely, when they are trailing 1-0 or 2-0, pitchers seem to make the opposite adjustment, being more cautious in order to not get farther behind in the count.

Still, I can’t get why the first pitch of the at bat should be equally slow. Maybe caution is playing a role here as well, as pitchers do not want to immediately find themselves in the back seat. Also, as mentioned for the 3-0 count, they are likely expecting a lower swing frequency from their opponents.

The enemy
I looked at a final possible cause for over-throwing: the identity of the opponent.

All other things being equal, I found Albert Pujols, Billy Butler, Troy Tulowitzki, Mark Reynolds, and Jayson Werth to be the batters against whom pitchers reach for their extra energy. The difference, compared to the average situation, is of 0.4 to 0.6 miles per hour when those guys are at the plate.

At the other end of the spectrum, I mostly found National League pitchers. As I mentioned nearly two years ago, pitchers go relatively easy on their colleagues.

So, looking at the top and the bottom of the list, we see an expected behavior: throwing harder against tougher opponents and catching some breaths against the easy outs.

To take a more comprehensive look at this phenomenon, I plotted the pitcher’s speed differential relative to his average figure against the run production of the batter. I didn’t find a perfect association between the two; however, some correlation (Pearson’s coefficient: 0.26) exists between a batter’s productivity and the speed of the fastballs he sees. 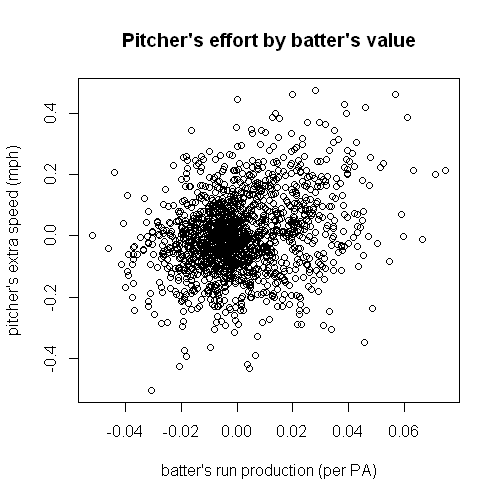 Final notes
All the variables mentioned in the article have been considered simultaneously, together with those considered in the previous column.

While different types of fastballs, which are usually thrown at different speeds, have been thrown together in the model, they are treated separately by the model itself. Thus, if pitchers throw fewer sinkers with men on base, that should not make the speed with runners on artificially higher.

The identity of every single pitcher is also accounted for in the model, so there should not be selection biases caused by some pitchers being on the mound more often in certain situations.

As is the case with every model, the one proposed here is a simplification of reality. One limit of using regression in this case is that reaching for extra power cannot be additive. In other words, while a pitcher can deal a higher number when facing Pujols (well, maybe the Pujols of old), or when he is in a jam, or when on an 0-2 count, all of those extra energies cannot be layered on top of one another, unless the pitcher throws way below his potential in normal situations.

If that could happen, the Cuban Missile would drill a hole in the catcher’s mitt.

Finally as Tom Tango often reiterates, “That’s usually our job, to measure things, rather than to find things.”

Once more, I did not uncover some revolutionary truth, I just put helped to quantify a few things.

Lisa: According to my calculations, you're a great brother 51 % of the time.
Bart: And according to my gut, you're okay, too.
Lisa: Can you put a number on it?

You need to be logged in to comment. Login or Subscribe
sam19041
Way to close it out with "Moneybart", Max!
Reply to sam19041
Ivaagenes
Nice article, a lot to think about. In your first table listing the average speed of fastballs in different situations relative to a bases empty 0 out situation, should we assume that these mean values have resonable standard errors?
Reply to Ivaagenes
newsense
Max-
You say pitchers increase their fastball speed as they put opponents away. Could there be a selection bias? After all, if a pitcher is pitching badly and having a bad inning, he's less likely to have achieved one or two outs.

Also a nerdy question: what kind of computer and stats software do you use for these huge datasets and models?
Reply to newsense
FrankL
I love this observation: "All other things being equal, I found Albert Pujols, Billy Butler, Troy Tulowitzki, Mark Reynolds, and Jayson Werth to be the batters against whom pitchers reach for their extra energy. The difference, compared to the average situation, is of 0.4 to 0.6 miles per hour when those guys are at the plate."

In other words, pitchers reach back when the quality of the batter is high (consistent with your run production chart per PA) OR perhaps when the opportunity for a strikeout is high/the batter is less selective despite that batter's ability to "hurt" a pitcher (high Run Production/PA).

Multi-variate analysis(which I can't do) of extra velocity Vs. batter selectivity (Count? K/BB ratio?? pitches/AB? Run Production/AB?) would be interesting.

This is great work and really got me thinking. Thanks!
Reply to FrankL
mnsportsguy1
I had what I thought was a great idea for a comment and got all excited that I might sound smart, then I read your great comment Frank and decided to leave the commenting to the very intelligent subscribers like you. Well done.
Reply to mnsportsguy1
maxtoki
Ian, standard errors for the base/out situations are in the 10^-2 ballpark, thus they are quite reasonable.

Newsense, let me see if I got your point: a pitcher has lost velocity, he stays in the inning for a while, without recording an out, then is removed. Conversely, a pitcher who has is usual velocity, remains on the mound and records outs.
Don't know how much this is affecting the numbers, but might be worth checking.

Frank, that's another great point: either throwing some batters' traits into the model, or at least draw the plot I did for batter's run value for the traits you suggest.

Brock, Why don't you let us know about your idea?
Reply to maxtoki
frankopy
were i pitching, i would treat pujols more attentively than, say, mendoza; were i ogling, i'd treat monroe more attentively than i would, say, mother theresa...more like banalysis than analysis
Reply to frankopy
sacko83
this article is better than anything i've ever done
Reply to sacko83
maxtoki
Newsense, I forgot to answer the other question.

I use R and MySQL.
Reply to maxtoki
AndrewKoo
Late to this, but along the lines of Newsense's comment, I believe pitchers try as hard as they can to stay warm in between innings, but even the slightest bit of stiffening happens as they're not throwing. As a result, it makes sense to me that fastballs to start an inning would be slower than the ones to close out an inning, since they're looser. Unless a pitcher is fatiguing, velocity wouldn't deteriorate as the inning progresses.

Great series of studies, looking forward to the next.