There is a fine but depressing book by the naturalist Tim Flannery and wildlife illustrator Peter Schouten called A Gap in Nature. The book contains vivid renderings descriptions of 103 animals that have disappeared from this planet at the hands of mankind, the earliest, the Moa, circa 1500 courtesy of the Maori people of New Zealand, the most recent the Atitlán Grebe of Guatemala in 1989. In between, there are amazing and beautiful creatures such as the Falkland Islands Dog (which might actually have been a fox or a wolf or something else altogether), hunted out of existence by fur traders and sheep herders about 1876. Until I read the book, I hadn’t know that the Falklands ever had a native mammal, or that they didn’t anymore.

Similarly, if you hadn’t been watching closely, you might not have noticed that the professional pinch-hitter had gone the way of the Dodo, the Javanese Tiger, and the Quagga, their habitats critically eroded by the virus-like relief pitcher, a species that breeds out of control and colonizes every roster spot it can find, as well as the designated hitter and two-way shortstops. It used to be that baseball had room for players whose specialty was coming off the bench to deliver a key hit. Even after the arrival of the DH in 1973, the American League found room for a few players like Jerry Hairston Sr. (434 PA as a pinch-hitter, almost all with the Chicago White Sox), Jim Dwyer (501 PA, mostly with the Orioles), and Randy Bush (361 PA, all with the Twins), those players are long gone and haven’t been replaced. The National League, with its continued need for replacement bats for pitchers, has sustained the careers of Lenny Harris (883 PA as a pinch-hitter), Mark Sweeney (799 PA), and John Vander Wal (624 PA), the AL has all but abandoned the practice of pinch-hitting. 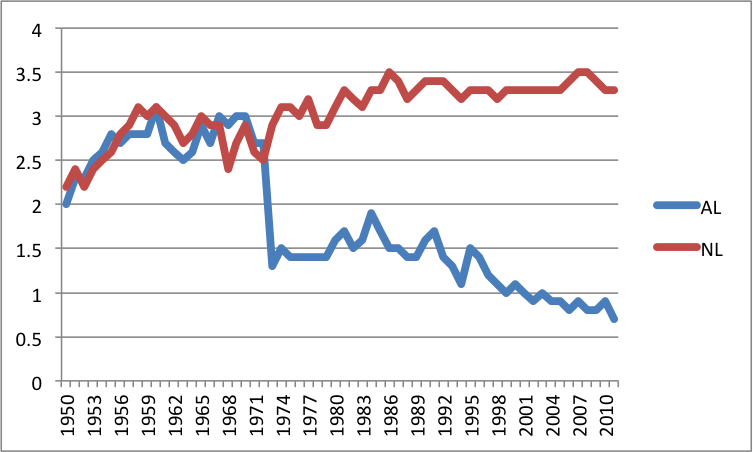 The nosedive you see for AL pinch-hitters in 1973 represents the aforementioned adoption of the designated hitter, but no rules change accounts for the way managers have relegated the strategy of pinch-hitting to the dustbin. The 2010s are only two seasons old, yet the NL has already seen six pinch-hitters accumulate over 100 pinch-hit plate appearances in that time. Conversely, the leading pinch-hitter in the AL in terms of opportunities is Jim Thome, with just 44 plate appearances, followed by John Jaso with 33 and Mark Teahen with 31.

This decline is clear when one examines the leading pinch-hitters in the AL as ranked by plate appearances. In the 1980s, the top ten pinch-hitters began with the aforementioned Hairston (father of current bench players Jerry and Scott) and concluded with Ernie Whitt, who had 143 plate appearances. Warren Newson was able to lead the league in pinch-hitting appearances in the 1990s with just 160, while Mike Macfarlane (who did a terrific job in the role, hitting .333/.381/.448) and Doug Strange (who wasn't bad either at .273/.320/.398), tied for tenth with 97 PA. It took Frank Catalanotto only 140 PA to lead the league in pinch-hit appearances in the 2000s (he hit .325/.429/.462), while Denny Hocking and Dave McCarty brought up the bottom of the list with 79 PA each.

Perhaps it was the arrival of Alex Rodriguez, Nomar Garciaparra, and Derek Jeter in the 1990s that made AL managers say, "Mark Belanger is dead; we don't need bench players anymore!" or perhaps it was just the continued epidemic of insecurity that is provoked by the advent of LaRussian bullpen strategies, with their second and third left-handers that convinced managers they simply couldn't afford the room for these players anymore. What is certain is that they have given up a great deal. In being able to respond to pitching changes only with pitching changes of their own, managers have emasculated themselves.

In an era of enlarged staffs and short benches, the problem is obvious. Even if Bobby Valentine wants to pinch-hit for Nick Punto—and oh yes, he will, doing so with, say, Cody Ross (a career .268/.388/.554 hitter in 67 PA)—it will require burning three players: Punto, Ross, and whoever replaces Punto at short in the next inning. Depending on how the roster shakes out in spring training, that could be Mike Aviles, Pedro Ciriaco, or Jose Iglesias, each of whom presents their own problems should their place in the batting order come up again. With the ten-man pitching staffs of not-so-long ago, a manager could pull off such a maneuver in the sixth or seventh inning—or, if you were Casey Stengel, the first—and still retain some flexibility. Today, you can only do the trick once and the bench is more or less blown, leaving a lonely manager to face the bottom of the ninth and the ever-present threat of extra-innings alone.

I leave it to those who have studied the schedule more closely than I to argue that the lack of off-days in the modern calendar requires that teams carry more than ten pitchers lest they fatigue the lot, but unless confronted with incontrovertible evidence that the last man cannot be stashed at Triple-A until the appropriate moment and then used in a taxiing rotation with a few other similarly semi-talented unworthies, I refuse to believe that the baker's dozen pitching staff is anything more than a security blanket for wet managers, or a wet blanket for insecure managers. For years, we've seen managers stuff their rosters with third catchers because of the remote possibility that they might pinch-hit for backstop number one, lose backstop number two to a meteor strike or cattle stampede, and then be forced to lose the game with the emergency catcher behind the plate. It has always seemed to me that the long 162-game schedule permits the manager the latitude to lose at least one game through an act of God like the snuffing out of two catchers in a single contest. Go ahead and lose it. All is forgiven in advance, and you can recall the third catcher from the minors that night and go on as if nothing had happened. Pitchers 12 and 13, if not 11 through 13, should probably be thought of in the same way. If for some reason you've run through the whole pen and have to use the fifth starter for a couple of innings, well, these things have happened throughout baseball history in a commonplace way. Get someone else up from Triple-A tomorrow, shuffle your rotation, and get on with life. How good is that fifth starter, anyway?

The one benefit of being, as my assistant editors keep reminding me, wretchedly old, is that I can recall a time when managers actually did things other than place calls to the bullpen, when they had the luxury of protecting players from their weaknesses by platooning, and I can recall, by reputation if not first-hand experience, great old-time pinch-hitters like Dusty Rhodes (hero of the '54 World Series) and Smoky Burgess, who I recently described in the Pinstriped Bible as a catcher too fat to catch but not so fat he couldn't come off the bat and deliver a hit on demand.

Donald Rumsfeld said (infamously in some quarters), that you go to war with the army you have, not the army you might want. Managers today don't even go to war with the army they do have, but rather a series of futile defensive gestures designed to control platoon matchups through pitching and which demonstrably fail all too often (see Boone Logan, southpaw relief specialist, and the .260/.328/.462 he allowed to same-side hitters in 2011—it's not atypical). Yet, no manager seems willing to move on from this self-limiting strategy, with the result that AL pinch-hitters are being confirmed into non-existence. So, look, parents: you can't take your kids to the zoo to see the Honshu Wolf or the Carolina Parakeet, but you can take them to the ballpark to catch Eric Hinske or Shelley Duncan (an AL leader in pinch-hit appearances this decade with all of 27 PA). Catch them while you still can. As with all the aforementioned species, the limited vision so common to humans mean that their continued survival is extremely doubtful.

Every opening day, I despair at the number of twelve- (or even thirteen-) man pitching staffs, which totally hamstring the manager in terms of being able to make offensive moves. By summer, you inevitably have one reliever who's so distrusted, that he can only be used in blowouts. So you not only have a dead spot there, but the resulting short bench makes the manger extremely hesitant to anything with the bench players, in case they're needed later. When will the new market inefficienty become roster construction? Which GM will wise up and tell his manager to live with an 11-man pitching staff?

Ernie Whitt may have been the tenth-most used pinch-hitter of the '80's, but he wasn't a true pinch-hitter. Catcher and third base were among the positions where the Blue Jays platooned, so most of Whitt's "pinch-hit" appearance were more a matter of coming to replace his platoon-mate (Buck Martinez) after a southpaw starter had been lifted. (I wonder if Rance Mulliniks and Garth Iorg made the list as well).
Reply to nschneider
BDesrochers
I wonder what the chart of pinch runners per game would look like. I always find myself wishing my team's manager would pinch hit more and pinch run less.
Reply to BDesrochers
mnsportsguy1
When you say the amount of pinch hitting appearances for AL players, is that for AL games only or is that counting interleague games?
Reply to mnsportsguy1
PBSteve
We counted interleague games as taking place in whatever league the home team was in.
Reply to PBSteve
mnsportsguy1
Alright, thanks for the clarification
Reply to mnsportsguy1
markpadden
A cap on sentence length -- consider it... I would suggest some number under 98 (words):

"I leave it to those who have studied the schedule more closely than I to argue that the lack of off-days in the modern calendar requires that teams carry more than ten pitchers lest they fatigue the lot, but unless confronted with incontrovertible evidence that the last man cannot be stashed at Triple-A until the appropriate moment and then used in a taxiing rotation with a few other similarly semi-talented unworthies, I refuse to believe that the baker's dozen pitching staff is anything more than a security blanket for wet managers, or a wet blanket for insecure managers. "
Reply to markpadden