We’ve heard the argument against RBIs a million times. It begins with name-calling and ends with being called names, but in between, the rational party explains that Runs Batted In do not control for context. Batters do not get to choose when they hit with runners on base. The same logic can be applied to win probability added—a measure that assigns credit based on the shift in a team’s win expectancy over the course of play.

A walk-off grand slam in a tie game might be worth 4 RBI and raise the team’s win expectancy to 100%, but the batter does not deserve more credit for that home run than for most other home runs. In fact, a single would have been just as good. Batters can alter their situational hitting but not their hitting situations. The accepted solution* has been linear weights, which gives batters credit for their contributions devoid of any context. An average home run is worth 1.4 RBI or 0.14 WPA.

*I believe the answer lies in WPA/LI, but that’s another argument for another day with another round of name-calling.

Baserunning is a different story. There is little reason to assign a blanket value to stolen bases other than for simplicity’s sake. A stolen base attempt is entirely dependent on the game state and under the baserunner’s control. Thanks to Retrosheet and Baseball Prospectus’ historically-based year-by-year win expectancy tables, I was able to assign each stolen base, defensive indifference, and caught stealing since 1954 a win probability added figure. Here are the top ten basestealers of all-time, by WPA:

The crux of all baserunning analysis hinges on breakeven rates. Most stolen bases increase a team’s chance of winning by two percent, and caught stealings result in a four percent loss. Therefore, batters need to be successful twice as often as they are caught to break even—a 67% breakeven rate. Those numbers fluctuate depending on the game situation. As the breakeven rate goes up, basestealers become choosier. Nonetheless, given the extreme lack of caution in the 1950s and 1960s, the zero-sum game has historically tilted in the pitching team’s favor. 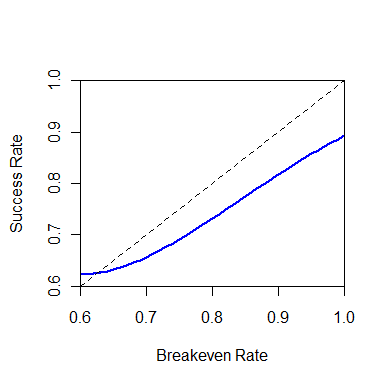 Keeping breakeven rates in mind, the best basestealer is not merely the one who has the highest success rate. Oftentimes, baserunners should expect to be thrown out; think of the third-base coach waving a runner home with two outs and a .250 hitter on deck. The best basestealer has a high success rate, while also taking advantage of his ability by running as often as he possibly can whenever his expected success rate is marginally above the breakeven rate. 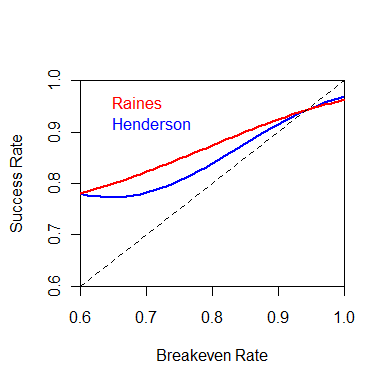 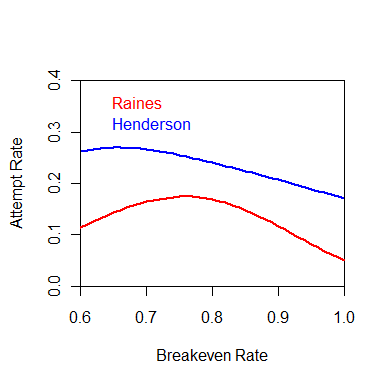 Carlos Beltran has been a fantastically gifted runner, but he’s lacked aggression on the basepaths. His success rate was consistently above 80%, regardless of the breakeven rate, and he did not attempt to steal much more often in more advantageous situations, in contrast to the rather mediocre basestealer Juan Pierre. 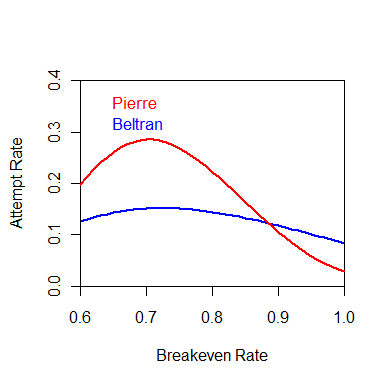 I also checked out the two most controversial players ever, one a top-50 basestealer and the other the worst basestealer. 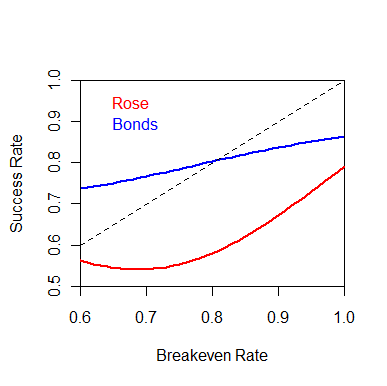 I’ll close with a word on Brett Gardner. Coming into the year, Gardner was the only player with at least 100 stolen base attempts to have averaged 1% WPA for each attempt. He was at 1.3%. That alone puts him among the top 50 basestealers of all-time, but it does not mean that he is one of the 50 smartest. In all likelihood, he should have been getting caught more often, as anyone racking up a 90% success rate is not taking enough risks. Even if he was the best basestealer in the game, he could have been better.

The data: I looked at situations with a man on first, a man on second, men on first and second, or men on first and third. A stolen base of third with men on first and second assumed that the trail runner took second and gave the lead runner the entire WPA for that event. A stolen base attempt of second with men on the corners assumed the runner on third remained on third. The swing is the leverage of the stolen base attempt. In a situation in which a CS is -15% and a SB is 5%, the breakeven rate is 75% and the Swing is 20%. Retrosheet does not contain full pitch-by-pitch data for all games, so many were excluded in calculating attempt rate. I included only situations in which the runner by the end of the at-bat had had an opportunity to steal on a called ball, a pitchout, a called strike, or a swinging strike.

You need to be logged in to comment. Login or Subscribe
TangoTiger1
{clap clap clap} Great stuff!
Reply to TangoTiger1
studes
Nice job, Jeremy. Can you talk a bit more about what drives the breakeven rate? Is it related to LI? Score? Other things? Also, what do you mean when you say Gardner has averaged 1% WPA for each stolen base attempt?

Also, are the BPro win expectancy tables still based on actual data? Probably doesn't matter for your specific comparisons, but I was just wondering.
Reply to studes
jgreenhouse
Thanks Tango/Studes.

Another way to put the Gardner thing: Coming into the year he attempted 100 steals and added 1.0 total WPA. His average WPA per stolen base attempt was 1%.

The BP WE tables are based on actual historical data. I liked the idea of using historical ones so as to include home field advantage and time period adjustments. The tables aren't perfect, as some 10-run games or something might have numbers that don't jibe with a theoretical table.
Reply to jgreenhouse
studes
Thanks Jeremy. A stolen base breakeven table for all inning/base/outs/score cells would be way cool. I'll work on it! (though it's probably been done somewhere already).

I don't mean to be nitpicky, but I had interpreted 1% to be WPA/Pre-attempt WE. I'm not sure putting a percentage to .01 WPA should be done.

Reply to studes
jgreenhouse
I think that would be a great resource to have alongside the win probability inquirer. When I'm watching a game I always feel like the runner should try to score from 3rd with 2 outs because the breakeven rate is almost always going to be below 50%, and it would be great to have a place to look that up.

In this case, I think saying that the average Gardner SB attempt has added 1% to his team's chances of winning makes sense.
Reply to jgreenhouse
studes
I can see that. It's just the change in language that threw me for a loop, I guess.
Reply to studes
ScottBehson
LI? Forgive my ignorance, but what does this mean?

Reply to ScottBehson
studes
Sorry. Leverage Index.
Reply to studes
jimspostmen
Very interesting article. Is it fair to analyze WPA per attempt, to look at wins added with each attempt? If so, of the top 10 players above, The Greatest Basestealer of All Time is only 7th in helping his team win with any particular attempt (+0.59%). Davey Lopes leads at 0.84% and Joe Morgan (ironically enough) is a close second at 0.82%.

Using WPA per attempt and an arbitrary minimum of 100 attempts, I get the following top 10. Gardner blows everyone away.

(I had trouble copying from the linked spreadsheet, so I had to limit it to people with at least 0.1 cumulative WPA; there's an outside chance I missed someone.)

Reply to jimspostmen
dturkenk
I've looked at this topic in the past too (http://www.hardballtimes.com/main/article/adjusting-steals-for-win-value/), back before Gardner got a lot of playing time.

My results showed Eric Davis and Stan Javier at the top of the list at 1.2%.

I used different Win Expectancy numbers than Jeremy did, which might be the reason for the difference/
Reply to dturkenk
pboerner
Nice. It'd be interesting to see a single plot for each player or pair of players that combined the success rate and attempt rate, vs breakeven rate; something like WPA/opportunity, as a function of breakeven rate. Cause right now you sort of need to see both plots to really get the whole comparison. Presumably such a plot would show, e.g., that Pierre adds a lot of value by running a lot in low breakeven rate situations, but gives it all back (and more) by running in high breakeven rate situations, compared to Beltran?
Reply to pboerner
jrmayne
I almost skipped this. Glad I didn't. The only thing it needed was an "awesome" tag to avoid the potential of missing it. Well done!
Reply to jrmayne
dethwurm
Great work.

A bit late, but if you do get around to answering: does this analysis account for the player's teammates in the lineup? Maybe the numbers are skewed for Gardner because he knows he could be on with Granderson/Teixeira/ARod (yes, and Jeter...) behind him, so the actual WPA a steal adds to his team is less than the average for MLB/history (since he'd score from first on an XBH anyways).
Reply to dethwurm