In the second inning against the Mets on July 2, Bartolo Colon threw an 0-1 slider to Angel Pagan, and Pagan grounded it to the shortstop. An hour later, with two outs in the fifth, Colon threw a 2-2 slider to Jason Bay, this one low and outside for ball three.

In between, the game settled into a predictable routine: Ken Rosenthal appeared in a bow-tie. Jose Reyes disappeared with a tight hamstring. Tim McCarver considered different ways to pronounce Cleburne, Texas. Puns about Dillon Gee. And, from Bartolo Colon, 40 fastballs in a row.

I’m dying for an all-fastball game. Sometimes, the announcers pay attention to what’s going on, and they sound almost giddy by the end of the second inning. It’s like they’ve stolen the other team’s signs, or developed the ability to tell the future, or at least found something to talk about besides the shadows that are creeping in around the mound. An all-fastball game would make everybody feel smart for noticing it.

Twenty-three times this year starting pitchers have thrown at least 86 percent fastballs (minimum 80 pitches) in a game. Bartolo Colon, Justin Masterson, and Charlie Morton account for 17 of them. Happily for fans of the Rule of Three, Colon, Masterson, and Morton are also all surprise successes this year. They're each a bit different in their reliance on the fastball and in how they got to be all-fastball threats, but together they raise a question: Are secondary pitches really necessary?

Colon’s fastball is really two fastballs. He throws a four-seam fastball more often to left-handed batters and early in the count. He throws a two-seam fastball later in counts, against right-handers, and usually on the outside part of the plate, with tailing action that brings it back toward the plate for frequent called third strikes. The Bartolo Coloniest sequence is something like this: 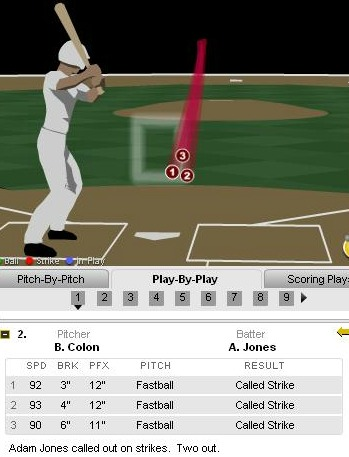 The first two were four-seamers, the last a two-seamer that froze the right-hander. Colon has thrown his two-seamer 40 times in 0-2 counts, and 12 of them were taken for strike three.

Masterson throws his sinker early in the count, and the four-seamer later. His extreme reliance on fastballs is relatively new; in 2008, he threw his slider 30 percent of the time. That dropped to 24 percent in 2009, 19 percent in 2010, and 16 percent this year. He also had a changeup he would throw every 30 pitches or so, but he never throws it now. This year, he is throwing his fastball 83 percent of the time, and 85 percent since June.

The most Mastersonian sequence of the year: 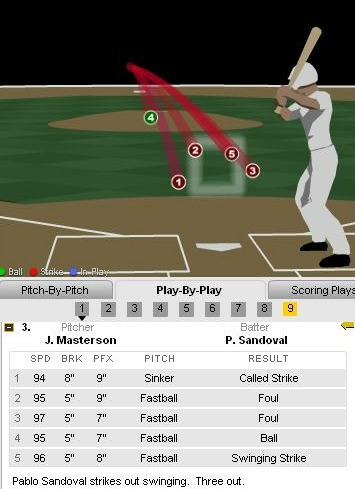 The Charlie Mortonest sequence of the year: 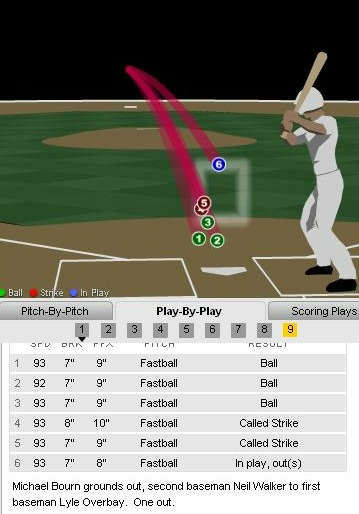 So far as I can tell, there are six things that we could consider about these pitchers:

You need to be logged in to comment. Login or Subscribe
bishopscreed
Why yes, I should know about them. Interesting article!
Reply to bishopscreed
beeker99
I had no idea about this, and the idea intrigues me. I look forward to the follow-up article in October when the season is done.
Reply to beeker99
NYYanks826
Blake Beavan of the Mariners might be trending that way, too.

Not sure if this is just small sample-size flukiness or if Beavan likes his fastball a lot.
Reply to NYYanks826
TheRedsMan
It seems we sometimes forget to appropriately value the basics. A well-located fastball is tough to hit, even if you know (more or less) that's it coming.
Reply to TheRedsMan
mattymatty2000
Hey Sam, great work and congrats on the new gig!
Reply to mattymatty2000
jivas21
Very interesting - great article!

From a game theory standpoint, I always thought the optimal mix was to randomize with likelihoods weighted by the strength of the pitch. That is, for someone like Colon it might be 80% fastballs and 20% sliders, with a computer generating a random sequence of pitches with those probability weights.

While there are certain counts where you may want to deviate from a random strategy (i.e. 3-0), I'd love to see a team try it out in spring training or in the low minors. Under specified conditions game theory predicts randomization as the optimal strategy in certain games (i.e. rocks-paper-scissors), and I'd be interested in seeing such a strategy in practice in baseball.
Reply to jivas21
mattymatty2000
I think it comes down to this: if you have one pitch which you are very good at and some other pitches which are potentially decent but also potentially crap then it behooves you to just stick with the plus offering. Changing speeds is good to keep batters off balance but, for example, if your change-up doesn't do much but hang out over the plate, maybe it's better to throw that two seamer on the black.
Reply to mattymatty2000
preams
Enjoyed this article. Thanks!
I laughed at #3.