As part of the research for an article about the strike zone, scheduled to run tomorrow, I collected information on each pitcher's average pitch location when the pitches crossed the front of home plate. Last night on Twitter, Josh Smolow mentioned that he was writing an article about Derek Lowe and how he's an outlier in terms of least pitches in the strike zone.  That's because Lowe pitches at the bottom edge of the zone, moreso than any other starting pitcher.

I thought this information might be interesting in its own right, but there was no space for it in the strike zone article itself. These charts present the average pitch location, separated by batter handedness, for each pitcher with at least 3000 pitches to lefties or righties from 2007-2010. 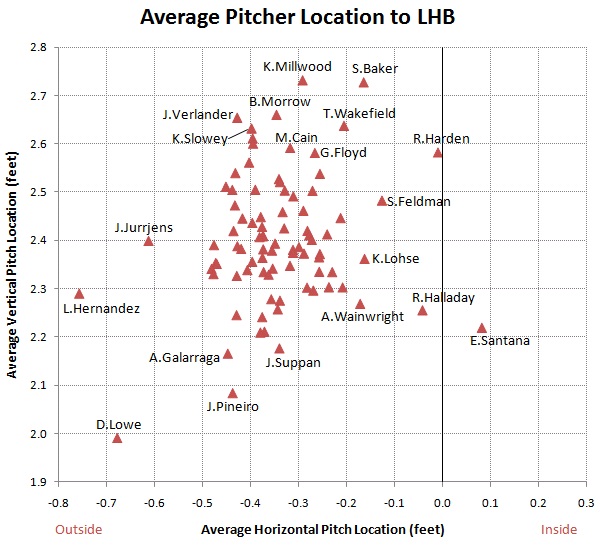 Here are a few other notable pitchers who didn't make the 3000-pitch cutoff:

If you plot location by organization, do Dave Duncan's hurlers show a 'low and away' pattern, or is that just me eyeballing things badly?
Reply to BurrRutledge
mikefast
I can take a look by team and see what I find. That's a good idea.
Reply to mikefast
dianagramr
That WOULD be interesting, and I'd also like to see the graph correlated with BABIP.
Reply to dianagramr
mikefast
That's an interesting thought. Dave Allen, and perhaps others I'm forgetting, have done some work on batted ball value by zone location for the league:
http://baseballanalysts.com/archives/2009/03/deconstructing.php
http://baseballanalysts.com/archives/2009/03/deconstructing_1.php

I've also looked some at how pitch type and location affects BABIP, but I hadn't thought of looking at in the specific way you suggested here. That might be helpful.
Reply to mikefast
nateetan
Plotting these exact plots with each dot colored by BABIP, FB%, IFFB%, and HR/FB would be quite interesting.
Reply to nateetan
mikefast
The St. Louis pitchers do have the lowest average pitch location, at 2.29 feet, and San Francisco is the highest at 2.52 feet.

I need to query my database again before I present all the numbers since I forgot to split it out by batter handedness when I did the team query.
Reply to mikefast
rawagman
Barry Zito's location looks intersting as most of the other non-knuckler pitchers who locate way up there are more the fastball types. Might make for an interesting study balancing speed and location.
Reply to rawagman
brandonwarne52
Knowing what I know about Scott Baker, this makes too much sense.
Reply to brandonwarne52
dethwurm
Do the coordinates on the plots really line up like it looks on the screen, i.e. does 0.5 to RHB = 0.0 to LHB? If so, it's interesting to me that a few pitchers (Verlander, Harden, Cain) seem to hit roughly the same spot regardless of batter-handedness...
Reply to dethwurm
mikefast
The middle of the plate is 0.0 in both graphs. The 0.5-ft mark is six inches toward the outside of the plate.

Most pitchers tend to pitch both lefties and righties toward the outside part of the plate, a little moreso to lefty batters.
Reply to mikefast
dethwurm
Ah, I was reading it completely wrong. Thanks.
Reply to dethwurm
dianagramr
This is very cool, and it would be equally interesting to see the *changes* to those average locations for specific pitchers from 2007-2010. As pitchers age and lose their precision, I would think those plot points would drift to the center of the plate, or would they scatter wildly to the (unintended) corners?
Reply to dianagramr
mikefast
I don't think, though I haven't checked, that pitchers lose much precision as they age.

I would guess that changes in location for pitchers over time would show a purposeful change in approach. I did show in the strike zone article that pitchers pitch outside more the older they are. Because pitchers enter and leave the sample at different ages, that's not quite the same thing as showing that pitchers pitch outside more as they age, but I would guess that's also true. I don't know why, though.

It might be due to changing pitch types; it might be due to spotting a slower fastball more out of the hitting zone; maybe something else. It's definitely an interesting topic for research.
Reply to mikefast
dianagramr
One more thought ... and I don't know if you have the data to do this . . . while Lowe may be .... um ... "low" in the zone, it stands to reason that any pitch with no "break" (moving along only one plane) is going to be easier to square up. So, if Lowe's pitches are moving in a relatively straight downward line towards that point, he's gonna be hit more than someone with tons of spin/movement. Is it possible to break this out by pitch type?
Reply to dianagramr
mikefast
Matt Lentzner and I did a presentation at the PITCHf/x Summit in August 2010 about how the final velocity of the pitch in the horizontal (left-right) and vertical dimensions as it crosses the plate has a strong effect on the whiff rate and BABIP of the pitch. In the vertical dimension, we found that pitches that were moving at a 6 or 7-degree downward angle as they crossed the plate were most likely to be hit. This is close to the angle of the typical batter swing plane.

That is true in aggregate for the league, it is not true for every specific pitch type thrown by every pitcher. I suspect that the way some pitchers play one pitch off another and the associated deception, or lack thereof, is part of what makes this vary from pitcher to pitcher.

Lowe's sinkers are dropping more than the average fastball when they cross the plate, and all else being equal (is it? I don't know), should create more whiffs and lower BABIP than average.
Reply to mikefast