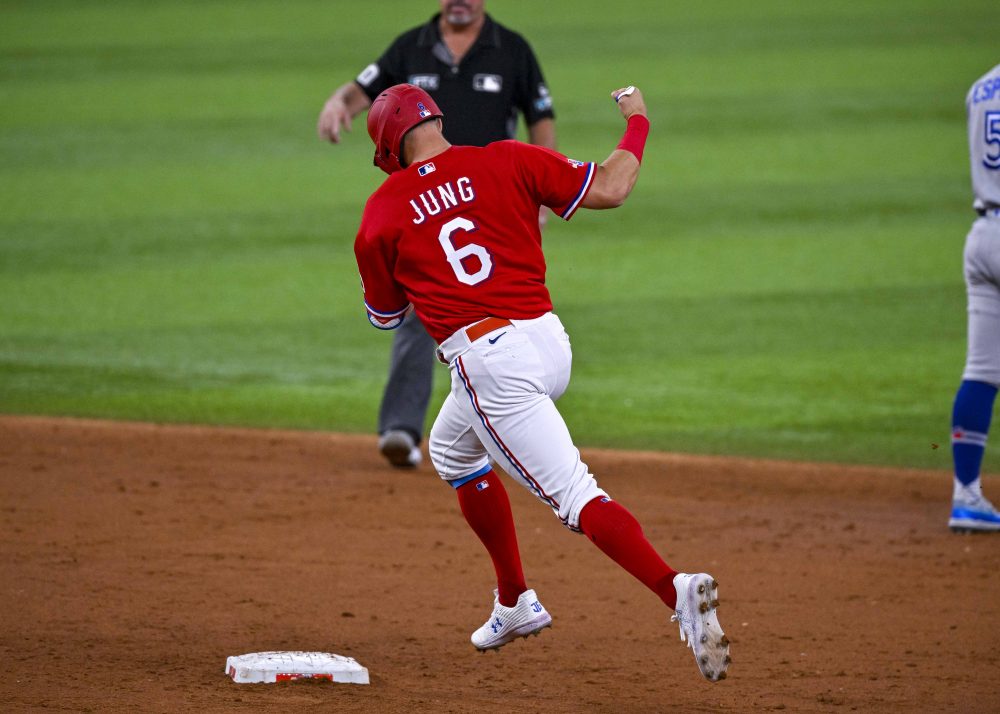 I’ll admit that I sometimes find the last 2-3 writeups of the season boring, but this week’s additions absolutely popped. There are more than a few interesting names below.

Josh Jung $29 (Highest Winning Bid: $131. Lowest Winning Bid: $1)
In redraft leagues next season, we’re going to have some tough decisions to make about Jung’s draft price because of his health. He is 24 years old and has already dealt with multiple injuries that have led to long absences. In redraft leagues this year, Jung’s potent hit tool makes him an instant add at a position (I know, I’ve said this 10,000 times in this column this year) that is quite thin. The bat is polished and should translate well to the majors. We’re looking at 23 games remaining including today, so Jung could hit .350 with three home runs or .150 with zero and neither outcome would be surprising. However, he’s someone you should consider even in 12-team mixed league if you have a soft spot at third. He could be that good.

Hunter Brown $29 ($178, $1)
Brown’s ceiling is considerably high, and if he shines in his brief 2022 window, I worry he’s going to be an overdraft in 2023. But enough of that. I’m here to pour cold water on you and tell you it’s too early to start running your 2023 mock drafts because you have a title to win now. Brown is an immediate borderline starter in 15-team mixed and with a matchup against the Tigers on tap he’s even worth considering in a 12-teamer this week. The walks are what worry me most, but Brown’s the sort of pitcher who could easily dominate in a short stretch before the league catches up to him, particularly in late September games where a lot of teams are running B-lineups out there. Brown could also finish the year in the pen, which is something else to keep in mind if your FAAB is finite and you need volume more than quality.

TJ Friedl $21 ($108, $1)
I wrote about Friedl last week, and based on his overall line it’s logical that 12 more TGFBI teams picked him up. He is four for his last 22 with six strikeouts and a home run so the regression monster has already come for him. Just kidding, small sample size analysis is dumb! I wanted to see how closely you were paying attention to a fantasy baseball column in mid-September. Friedl is exclusively facing righ-thanders, but the Reds have a jam-packed week with nine(!) games on the slate and six projected righties on tap. Grabbing any Reds you can this week if you have a hole in your lineup and FAAB in your pocket is a solid play and Friedl is one of the better plays in this lineup you can make

Elvis Andrus $21 ($88, $1)
Andrus has been White hot (ha ha, get it? He’s a White Sox now. That’s why I capitalized that word. Hilarious!) and while I wouldn’t bet on him keeping it up, I would have placed that same bet last week and would have lost. I’m guessing Andrus won’t sock another 5-7 home runs or keep hitting .300 but he is having the best year of his career since 2017 and could very well play at an elevated level on a team that’s contending for a division title. A dirty secret about Andrus is even at the level he was playing at for the Athletics he was a borderline 15-team mixed league player because of those steals (nine).

Jose Leclerc $13 ($63, $1)
It took a couple of months after his activation, but it appears that Leclerc has finally reclaimed the closer job for Texas that he had way back in 2019. His strikeout rate looks low on the surface, but he has a 33 percent strikeout rate  in his last nine outings and his fastball velocity is up to its 2019 levels in those outings. Managers are mercurial about their closers, but Jonathan Hernández has struggled, and it looks like the job is Leclerc’s.

David Villar $11 ($88, $1)
The Giants have more platoons than Blockbuster in early 1987. This is a reference to the 1986 movie Platoon and VHS copies of the film you could rent at your local video store back when streaming didn’t exist and dammit this joke didn’t land because I’m old. Despite his righthanded-ness Villar has been playing everyday at multiple positions for the Giants. He was an under-the-radar minor leaguer who was never viewed as much of a prospect mostly due to his age but he just kept hitting and forced the issue for the Giants. The propensity for whiffs makes me wary, but the power is legitimate, and Villar is worth a roll of the dice if you need power, particularly if he’s third base-eligible in your league.

Jon Gray $11 ($40, $1)
Gray is penciled in to start later today at Miami and will slot into the Rangers rotation the rest of the way assuming good health. He has been a better pitcher outside of Coors and a reliable middle-of-the-road rotation piece in deep mixed. It’s a little strange that the Rangers eschewed a rehab assignment, but it is mid-September so it’s not that strange. But the lack of a rehab assignment does make it impossible for me to base what he’ll look like on anything other than the vibes.

Triston Casas $10 ($33, $1)
Casas is a solid prospect who I suspect many had high expectations for and are somewhat disappointed that he hasn’t lived up to those expectations. That isn’t to say that he hasn’t been good – he had a well above average DRC+ nearly everywhere he played in the minors – but I think some people were expecting way more pop and better contact. That could all come together for Casas eventually as he is a very talented hitter, but he has struggled out of the gate, and he is a tough call for 2022 if you are trying to win now.

Aristides Aquino $8 ($50, $1)
Little has changed regarding Aquino’s outlook. He possesses an all-or-nothing bat and it’s usually nothing. While the power is exciting when he connects, he is now a lifetime .214/.288/.439 hitter with a 34 percent strikeout rate. As I mentioned above the Reds have nine games this week and are going to face some soft pitchers as they and their opponents try to piece together enough fresh arms to survive the week. If you’re desperate for power and need to swing for the fences (ha ha, I am killing it in this column), Aquino is the gamble for you.

Bailey Falter $5 ($12, $1)
Falter is noteworthy for his extreme extension: his low 90s velocity plays up and looks like a mid-90s fastball to most hitters thanks to this well documented feature. The off-speed stuff is OK, but most of Falter’s game is using that extension and glove deception to confuse hitters and throw them off. It has worked so far and as long as he keeps throwing strikes, he should be a decent 15-team option in two starts at Miami and Atlanta this week.

It might seem surprising that Peraza wasn’t on a team yet, but he hasn’t done much and more importantly isn’t playing every day for the contending Yankees. The stolen base potential is mostly why I would be interested in him, but he has zero steals in the majors and there are better targets for this category, specifically.

It is far more surprising Waldichuk was available, and I was surprised to see him go for $0. He has a very tough schedule, but wins are unpredictable and good pitchers on bad teams can earn them. If there is a week I’d strongly urge you to slot him in your lineup it is this week, as he has a two-step at Texas and then at Houston.

LABR and Tout both have a FAAB reclaim rule that permits you to get FAAB back for an injured player. In LABR, you can only get FAAB back for players on the 60-day IL before the All-Star break. You also are not allowed to add players on the IL to your team. This explains why Flaherty was available in a league with unlimited IL slots. I prefer many of Tout Wars’ rules to LABR, but this is an instance where I prefer LABR’s method and don’t believe you should be permitted to bid on players on the IL.