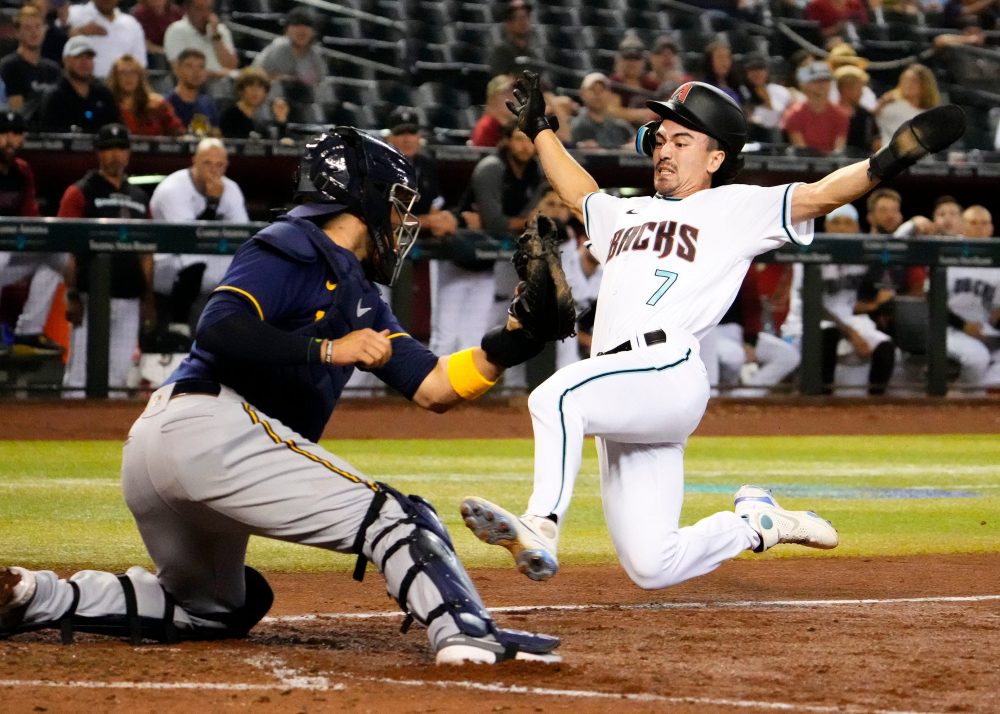 Corbin Carroll $94 (Highest Winning Bid: $222. Lowest Winning Bid: $3)
One of the paradoxes of The FAAB Review is that the best free agent additions make for the least interesting copy. If you don’t know who Corbin Carroll is and the kind of impact he could have on your fantasy team, you’re either in a super shallow league or gave up on your fantasy baseball teams last month to start your fantasy football prep. Carroll was our #1 dynasty prospect in our most recent Top-500 ranking and the power and speed can help your fantasy squad right away. The only potential drawback is the Diamondbacks aren’t quite going to play him every day, which means you might miss 4-8 plate appearances in any given week compared to what you’d get from an everyday hitter. Even considering this, the upside is too tantalizing not to make Carroll an automatic add.

Gunnar Henderson $93 ($213, $4)
I could copy and paste the comment for Carroll above without changing much. Henderson runs somewhat less, but aside from that the two biggest differences are: 1) Henderson’s infield eligibility and 2) the Orioles status on the periphery of a wild card race. Henderson ostensibly is also supposed to get some occasional rest down the stretch, but the Orioles haven’t sat him yet as they straddle the fence between wanting to keep Henderson’s rookie eligibility for 2023 intact versus putting their best players out there for the stretch run. Henderson has excelled in his teensy-weensy major-league sample to date.

Spencer Steer $17 ($48, $2)
As consolation prizes go, Steer is a fine one. Acquired from the Twins at the deadline as part of the Tyler Mahle deal, Steer was a contact middle infielder who found some power this year and should get plenty of playing time for a weak Reds team down the stretch. He is helped by The Great American Ballpark and a soft schedule that should help pad his stat line. His defense isn’t anything special, but it is adequate and, again, this is a weak Reds offense. The more I look at Steer, the more I wish I had been more aggressive bidding in my deeper mixed leagues. You can read more about him in our Call-up piece.

Michael Toglia $14 ($158, $1)
Toglia comes with a great deal of risk but as I was writing this, he just hit another home run. That’s not true, but it certainly feels that way with Rockies hitters, particularly for Rockies hitters with the kind of easy power that this one has. There are plenty of drawbacks in the profile, most notably a lot of swing-and-miss and the considerable risk that Toglia will eventually be exposed by major-league pitching and particularly big league off-speed stuff. Short term, he is a great matchup play when the Rockies are home, which they are this week and the week of September 19-25.

Ken Waldichuk $12 ($39, $1)
If you’re fishing for strikeouts and don’t care too much about any of your other pitching stats, Waldichuk is a must add. This isn’t to say that he’s going to stink on ice or torpedo your rate stats, just that he comes with the risk that every pitching prospect comes with and has a tough matchup this week against Atlanta. Waldichuk has good stuff and a deceptive delivery that works to his advantage. I’m always skeptical of “deception” pitchers but his comes with mid-90s heat and two solid secondary offerings.

TJ Friedl $12 ($36, $2)
Our own Carlos Marcano dove into how Friedl made a positive adjustment to his plate discipline and is now able to maximize his contact on down and inside pitches. It’s often lost that when a hitter closes a hole in his zone, he makes himself stronger everywhere else. Friedl was once viewed as a speed-only play but is showing some power too, which makes him an intriguing stash, at a minimum. Like Steer, Friedl is the beneficiary of a great home park and a soft schedule, although Friedl is in a strict platoon and sitting against southpaws. That won’t have much of an impact this week.

Gavin Sheets $12 ($41, $2)
Sheets is a strict platoon bat against righthanders, and the White Sox are scheduled to face three southpaws this week. The power makes him intriguing but unless your league allows for daily lineup changes, he’s a tough player to roster. The numbers against righties aren’t that stupendous.

Jimmy Herget $11 ($32, $1)
One alleged drawback of closers on bad teams is that save opportunities can be few and far between. However, there is a sneaky advantage to these types of closers late in the season, which is that their managers often aren’t invested in maximizing leverage or keeping arms fresh for the playoffs and will just leave pitchers in their predefined roles. Nick Martinez could be the closer for the Padres the rest of the way, but San Diego is extremely invested in getting Josh Hader back on track. This long-winded intro is my way of saying that Herget is probably the Angels’ closer for the last month and while it’s easy to just go “lol Angels” and move on, he could easily get 5-7 saves the rest of the way.

Nick Pratto $9 ($36, $1)
Pratto is swinging a ridiculously hot bat, with a .297/.350/.730 slash line in his last 40 plate appearances. This hot streak comes with a 35 percent strikeout rate so he could come crashing down in short order. The back-of-the-napkin analysis is that he’s a must add if your need corner infield power but he’s a big-time batting average risk. He could also lose playing time once Vinny Pasquantino returns from his rehab assignment.

Keston Hiura $7 ($22, $1)
In the old days I would have looked at Hiura’s 14 home runs in 216 PA and wildly overbid on him, assuming the breakout was inevitable. Now I have enough actionable information to know that he’s one of those weird righties who stinks against lefties and even taking his success against righties into account the strikeout rate is way too high and a .372 BABIP isn’t sustainable. He is slated to face six righties this week in Milwaukee’s eight-game week and gets a series at Coors, so add him if you have the roster space.

There were some sneaky-solid additions in Tout AL this week. I like Aguilar as a potential dead cat bounce play for the Orioles. He isn’t likely to play much against right-handers but that matters far less in AL-only than it would in mixed. Bruján is back again and with Brandon Lowe out could see a fair amount of playing time for the Rays. Maybe he stinks yet again but he is fast (and he stole a base yesterday).

Brown got a spot start last night against the Rangers (six innings, five Ks, one walk, no runs allowed) and is supposed to spend the rest of the season in the bullpen. The skill set is strong and with the Astros locked into a playoff spot and likely to rest arms down the stretch, it wouldn’t surprise anyone to see him get another start or two.

You can’t bid on minor leaguers in LABR, which explains Carroll’s availability. Five of the seven winning bids came from the team in fifth, who doesn’t have a shot at winning but has an outside chance at fourth place. This isn’t intended to be snarky in any way whatsoever. I love when teams try under any circumstances. I don’t care about your fantasy football teams.

Starting pitching is always at a premium in mono formats, which is what made Alexander and Pepiot more valued here than they were in TGFBI. Alexander should keep his slot in the Brewers rotation, while the Dodgers have transitioned to a six-pitcher staff with Pepiot slated to pitch on Sunday at San Diego.