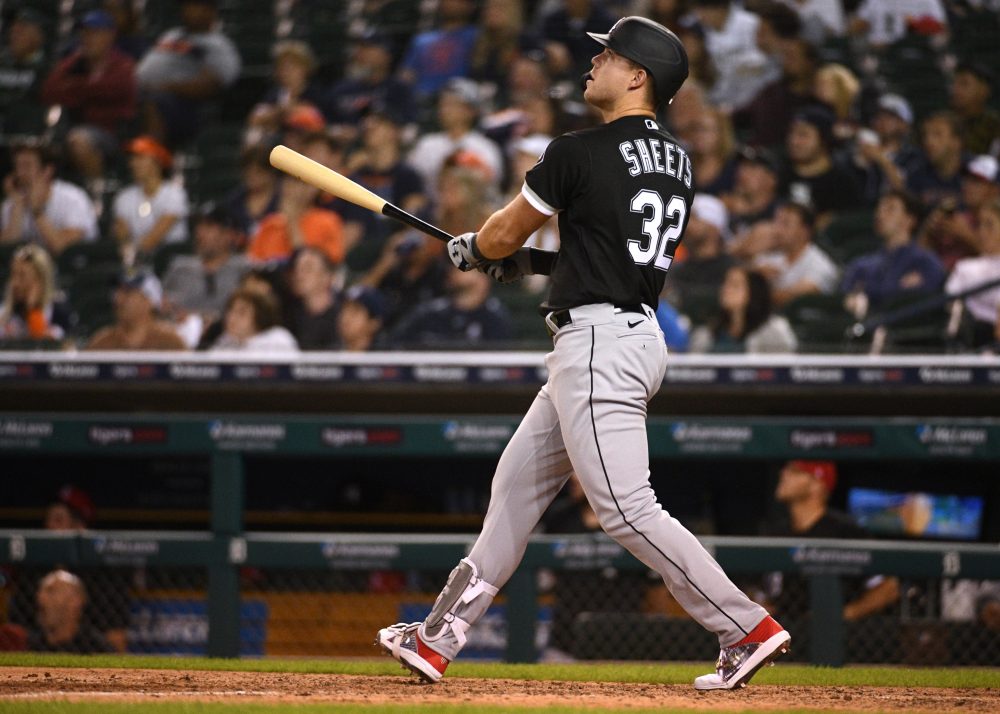 Scott Barlow $39 ($126, $2)
The trend and performance lines both point toward Barlow as the closer going forward for the Royals, but as we’ve seen in many instances in 2021, more teams are moving away from a traditional ninth-inning role and opting for the hot hand or matchup plays. It’s particularly frustrating in Barlow’s case, as co-closer Greg Holland’s numbers the last three weeks have been poor, while Barlow is easily the best reliever in the Kansas City pen (more by default than anything else). Barlow is a solid bet, but know that there will be some weeks where Holland or someone else gets the saves and all Barlow does is provide lots of strikeouts and nice ratios.

Gavin Sheets $29 ($108, $3)
Sheets’ biggest two issues heading into this season were that he was blocked at 1B/DH by José Abreu and Yermín Mercedes and that for a big, lumbering dude his power was underwhelming throughout the minors, thanks mostly to a swing with a downward plane. Sheets worked with a trainer last summer, lost weight and worked on launch angle with his dad, former major-leaguer Larry Sheets. He was solid in the minors, and multiple injuries and a prolonged Mercedes slump have given Sheets an opportunity to start. His six-game sample tells us nothing, but the projection models are based primarily on his pre-2020 conditioning and swing. I’d bet more on something like a 20- to 25-homer seasonal pace with a .250-.260 AVG than what a projection from March says. I’m betting the transformation is real in this case.

Kyle Muller $28 ($43, $11)
I wrote about Muller last week, so I won’t chew my cabbage twice. He was solid against the Marlins, allowing three runs and eight baserunners with seven strikeouts in 5 2/3 innings. Muller was optioned to the minors on Sunday, as an off day on Thursday and the All-Star Game afforded Atlanta the opportunity to go with a four-pitcher rotation this week and hit the reset button next week after the break.

Cole Sulser $21 ($45, $2)
Sulser is probably the closer in Baltimore, but since César Valdez lost the job in late May, there have been six saves converted by the Orioles in a 37-game span. Three of those were by Sulser, with one apiece by Paul Fry, Adam Plutko, and Dillon Tate in a 10-run blowout. Tyler Wells has been the best reliever in the Orioles pen by far of late, and Tanner Scott has improved and continues to lurk. This price is fine for a low-end stab at a closer on a poor team, but there isn’t anything in Sulser’s line that makes me believe he’s an absolute must-grab.

Ranger Suárez $20 ($41, $2)
Oh huzzah, another closer to write about! Maybe. Bailey Falter would be the guy in Philadelphia if we were solely going on merit, but Phillies manager Joe Girardi seems to be gravitating toward Suárez as the favored option in the ninth. Suárez throws strikes and has kept the ball on the ground this year, with his 65 percent ground-ball rate ranking as the sixth-best mark among qualified relievers. Suárez is worth the speculative add, particularly if you were already invested in Héctor Neris or José Alvarado.

Tylor Megill $17 ($38, $3)
Megill’s scouting report spoke to a long-term future as a reliever, and despite some success as a starter in a home-and-home series against Atlanta, it’s not difficult to see why. He has dominated his first time through the order with a .284 OPS against, has been fine his second time through (.733), and gotten walloped his third time through (in a piddling four PA sample size). Megill throws hard, and his slider has been a better pitch than advertised, but I wonder if his change will be enough of a third pitch to survive. This is the week to stream him in mixed if you’re going to do it, as he gets a solid two-step at home against the Brewers and Pirates.

(Megill put up yet another strong outing last night against Milwaukee. He faced only 19 batters, so keeping him around this limit is a likely key to his short-term success.)

Kolby Allard $14 ($31, $1)
As Nathan Grimm pointed out in last week’s Deep League Landscape, it’s foolish to write off a 23-year-old pitcher who was a top prospect for three years running. Allard’s awful career 6.72 ERA heading into 2021, and especially the 7.75 ERA that he posted in a “full” season last year caused many—including me, I’ll admit it—to dismiss him almost entirely. The key to Allard’s relative success has been throwing more strikes, and he is also throwing fewer fastballs in favor of more curves and changeups. I’m not a believer, but as is the case with Megill, Allard has a favorable two-start week. In Allard’s case it’s the Tigers and Athletics that he gets in a park that has been helping pitchers out a great deal.

Chad Green $11 ($46, $1)
Green has been solid, but these bids are more about Aroldis Chapman’s complete collapse than they are about Green. In his last three outings, Chapman has allowed five hits, six walks, nine runs and struck out two in 1 1/3 innings. Chapman won’t lose the job forever, but it’s past time to give him a breather and let Green close for a while, as Chapman works through his issues in low-leverage situations. Whether a couple of weeks of Green are worth a roster spot in a non-mono league is dependent on your league and how badly you need saves.

Jace Peterson $9 ($33, $1)
Kolten Wong returned to the IL, and Peterson has been the beneficiary, grabbing the keystone job for the Brewers. Peterson added power to his game at Triple-A Nashville, and those changes have translated to the majors, with three home runs in 109 plate appearances. Add that to Peterson’s four stolen bases, and you have a sneaky 15/15 seasonal pace candidate if Peterson’s power improvement is legit.

Elias Díaz $4 ($9, $1)
Having a share of a Rockies catcher sounds enticing on paper, but this season it’s an underwhelming ticket to a catcher with 10-12 home runs and a low average. The hope if you grab Díaz is that he is super productive at Coors and you can live with him being a non-factor on the road, but a .756 OPS at Coors doesn’t make up for a .482 OPS outside of Denver. At a different position, he’d be a viable streamer, but carrying a catcher on reserve for streaming purposes isn’t a sensible strategy in any format.

I wisely bid on Burger and beat out my nearest competitor by $5 but completely misread the Sheets market and was the only bidder. I like Sheets more than Burger in the short term. I also streamed Peralta for his two-start matchup this week at Texas and at Minnesota. It’s likely that I’ll drop him next week (although Peralta was putting up yet another gem as I was getting ready to submit this to editing).

Mercado’s five home runs and nine steals in 203 Triple-A plate appearances get me all hot and bothered. His .216 AVG pours ice water on my hopes and dreams. He’s mostly starting for Cleveland, but a 39 percent strikeout rate makes that water feel even colder.

Folty has kinda, sorta turned it around of late, with a 3.60 ERA in his last three starts. His 16 strikeouts in 20 innings are underwhelming, and a .185 BABIP against suggests that regression is going to hit him as hard as opposing batters did in April and May.

I was busy, adding Suárez, Akiyama, and Lopez to my team. I lost Sergio Alcántara to the minors and Erik Gonzalez to the IL and needed bodies. I hope Akiyama steals bases, but that hope hasn’t materialized in 2021.

I profiled Suárez above. I already have Daniel Bard and Will Smith in my pen, so having Suárez gobble up some saves so I can shoot up the category would be ideal.