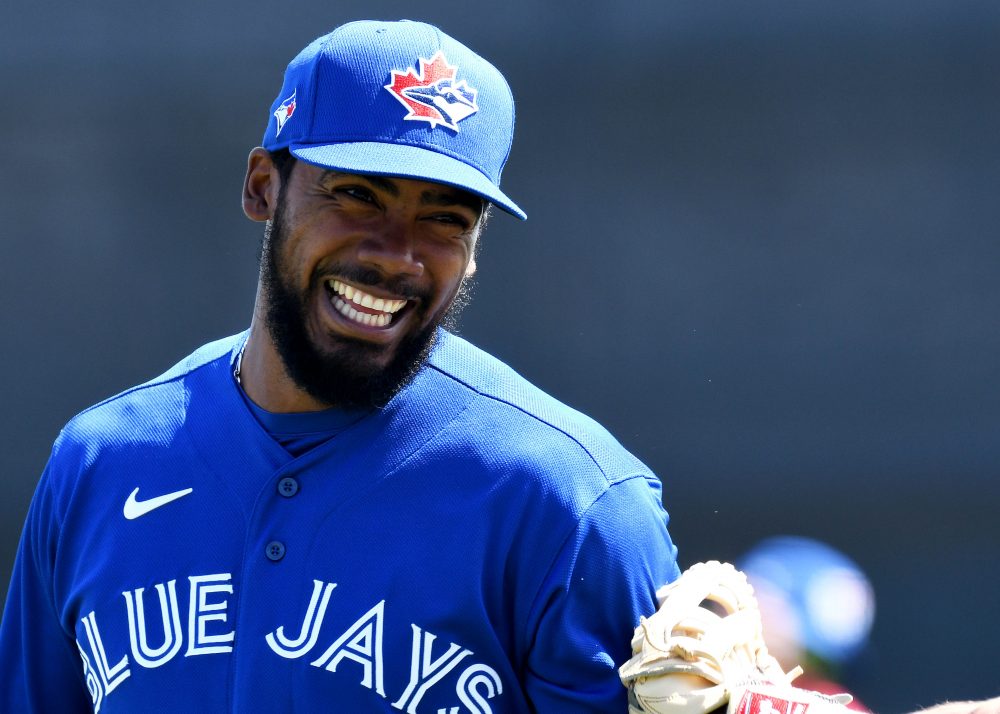 Saturday, March 20 marked my 12th year in Tout Wars, one of the longest running industry fantasy baseball leagues, and for the second consecutive season our 12-team, AL-only, 5×5, $260 salary-cap draft was a virtual affair. There is something to be said for being able to sleep in your bed, have a leisurely morning tweaking your bid limits, and then having your draft in the comfort of your own home. But as I mentioned in my LABR recap last month, I miss both the dynamics of the in-person draft and seeing close friends and colleagues.

In 2020, Tout Wars abolished its minimum innings requirement, so I decided to field a team with nine relievers and spend about $220 on offense. I finished fourth. I toyed with attempting the same strategy in 2021 but opted against it. However, the rule did influence my pitching bids. I wouldn’t purchase an ace unless the prices collapsed at the top. I wasn’t planning on spending a disproportionate amount on hitting, but given the rule, combined with the extreme uncertainty surrounding pitchers in 2021, it wouldn’t surprise me if I did.

Round 1: Mike Trout $50, Luis Robert $28
Tout Wars uses nearly all the traditional Rotisserie-style categories. The exception is batting average, as Tout uses OBP instead. When I adjusted my AL-only bids, it pushed Trout up to $49, but I decided before the draft that I would go as high as $51. He was the first player called out, and I very quickly had my offensive anchor. Even though he doesn’t run anymore, he is incredibly valuable in this format.

Robert came out four players later. OBP hampers his value a little, but I was surprised to get him at $28, given how few viable sources of steals exist in the AL. The risk is as high as the reward, but the 30-plus stolen-base potential reduces Robert’s floor, unless he completely crashes and burns.

Round 2: David Dahl $5
Once in a while, someone tries to sneak in a cheap player in the early portion of a salary-cap draft. I wasn’t targeting Dahl but was perfectly happy to get him for $5. Even if he only gets 400-450 plate appearances due to the usual time on the IL, he’ll still be a bargain.

Round 4: Luke Voit $24
I obviously felt better about this pick before Voit’s injury, which will keep him out until at least May, and possibly until June. At the time, I was pleased to get a power bat with 30-plus homer potential and strong on-base skills.

Round 5: Teoscar Hernández $21
I don’t want to go so far as to say that I’m staking my reputation on this pick, but I am higher on Hernández than nearly everyone. The batting average and OBP will drop, but the big-time power is legitimate. He should also be good for 5-10 steals.

Round 6: Yoán Moncada $24, Jesús Luzardo $15
Moncada is a player who I hadn’t been targeting anywhere but was pleased to get at this price. I’m a big believer in the talent and am entirely writing off his 2020 due to COVID-19.

I had now spent $152 on six hitters, and my prophecy about not spending on pitchers had all but come to pass. Closer prices jumped compared to 2020 (when I got Roberto Osuna and Liam Hendriks for a combined $35), with four going for $21 or more and seven going for at least $17. While some of the elite starters came close to my bid limits, they all predictably sailed past my prices. In this context, I was surprised that Luzardo fell in my lap. I’m not the biggest fan, but there’s enough upside baked in at $15 to where I’m fine with it.

Round 8: Kyle Lewis $18
Lewis was yet another player who I wasn’t expecting to get. Given my bid limit and what he went for in LABR, however, I wasn’t surprised. The OBP format helps him somewhat, and he’s another player who isn’t a complete zero in steals. The late-breaking injury news stings, but it doesn’t look as serious as Voit’s malady does.

Round 10: Leody Taveras $9
One thing I wasn’t planning on doing was locking out my outfield with my first nine players. But Taveras at $9 was too much to pass up, even though he is yet another risky player. He is yet another high-end steals candidate in a context where these types of players are increasingly difficult to acquire.

Round 11: Triston McKenzie $6, Dallas Keuchel $7
The lack of an innings requirement took away any worry that I had about fielding a team with too few starters. But this is where I believe the rule led to prices falling, allowing me to get two arms in McKenzie and Keuchel as significant bargains compared to where I had them valued. A Luzardo/McKenzie/Keuchel base at a combined $29 was better than what I was expecting, given my lack of an ace.

Round 12: José Urquidy $10
I think I heard Bret Sayre fall off his chair when I texted him that I got Urquidy for $10. My goal in avoiding aces was to get plenty of upside on the relative cheap. I feel like my mission was accomplished.

Round 13: Shohei Ohtani $7 (pitcher only)
Most leagues treat Ohtani like one player, and you must choose whether to utilize him as a hitter or pitcher in any given week. Tout Wars separates Ohtani into two distinct entities. I drafted the pitching version of him, for a price that I thought was super cheap if he works out. In shallower leagues, I’d be wary of wasting a roster spot on him if he’s going to miss some weeks on the mound, but even if he only starts 20-22 times this year, he’s a potential bargain in single digits in an AL-only.

Round 14: Jeimer Candelario $10
This is the tough point of any salary-cap draft. This is where you must decide if you should push more for the players you want or wait for value. With $36 left for 10 players, I didn’t feel that I could get too cute and wait too long for bargains across my roster. Candelario was solid in 2020 and is another player who is better in OBP formats than AVG-based ones. His AX projection is comparable to Gio Urshela, who cost $4 more.

Round 17: Max Stassi $4
After Candelario, this is where I had to start making decisions about where to spend, as opposed to just going after bargains. I decided that I wanted to try and get at least one quality catcher and two starting middle infielders, while going cheap on my last four pitchers. I’m all about Stassi this season, who is slated to job-share with Kurt Suzuki but who has vastly superior framing stats. Stassi could push Suzuki into more of a true backup role sooner rather than later.

Round 18: Ryan Jeffers $1, José Iglesias $4, Freddy Galvis $6, Rich Hill $3
If I made a mistake in Tout Wars, it was waiting too long on middle infielders and not pushing at least two or three MI names higher earlier in the day. Iglesias and Galvis are fine at their prices and should provide volume, but there were a couple of players on whom I passed earlier who would have been better fits. I was thrilled to get Jeffers at $1 (I was willing to go to $4-5). It gave me flexibility to push a little more on pitchers like Hill in the endgame.

Round 21: Hanser Alberto $2, Bryan Garcia $3, Ross Stripling $2
Alberto at $2 gives you an idea of how ugly middle infield is at the end of an AL-only. Garcia was my lone closer shot at $3 and I’m a big believer in a Stripling bounce back at $2.

Round 23: Casey Mize $1
I closed out with Mize, thinking that he’d wind up in the minors at the alternate site and be a de facto reserve pick, but it looks like he’s going to break camp with the team.

Reserves: Taylor Trammell, Julian Merryweather, Sergio Romo, Matt Bush
My strategy in the reserve rounds was to take some relievers who could (A) eventually close and (B) use in favor of starters with bad matchups in any given week. Trammell was too good to pass up as a reserve.

Not surprisingly, very well on offense. The AX projects that I’ll finish with 51 out of a possible 60 points on offense, with OBP being my only Achilles heel. This is what happens when you spend $206 on offense. As noted above, there is more risk baked into the team than I’d like, and it’s not difficult to envision a scenario where Robert and Hernández flop and this team crashes and burns. But with that risk comes upside.

The pitching is another story. I’m projected to only finish with 18.5 points out of 60. This is what happens when you spend $54 on pitching. But the idea behind spending lightly on your pitching staff is that pitching is unpredictable, and even in an AL-only league, there will be plenty of opportunities to improve your staff during the season. I could have spent $80 on pitching and finished with 18.5 points in the five pitching categories.

This is what it looks like going into the season:

It isn’t pretty, but as I noted in my LABR recap, my more successful teams haven’t been traditional roster constructions. We’ll see how well this works, but any team revolving around Trout and this much offense (and Ohtani on the mound!) will be fun. I can’t wait to get started.

You can find all the Tout Wars AL-only rosters here.

You need to be logged in to comment. Login or Subscribe
Jon Crate
I love that pitching staff. That's exactly the kind of staff I'd come away with. In fact, this whole team looks pretty much like what I have in mind. I don't think I'd go after Trout but otherwise having the potential to place top 4 in steals is what I'm looking for.
Reply to Jon
Mike Gianella
This is the only place I have Trout this year. The OBP format definitely made the difference.
Reply to Mike
Mike Gianella
that's not quite right, I also have him in a league where I share a team with Bret.
Reply to Mike
Jon Crate
Oh definitely. My thing is just that I don't like putting that much into one player. It always feels like I'm screwed if that one guy gets hurt. It's just a personal preference. But I think you covered that possibility pretty well with who you have.
Reply to Jon