12-Team Mixed Leagues (Must be available in at least 50 percent of ESPN, Yahoo, or CBS leagues)

So you missed out on Aaron Judge, Ryan Zimmerman, Chris Owings, or Mark Reynolds. Maybe you can still grab Pillar, who is slashing .302/.347/.491 with 13 extra-base hits (four home runs) and three steals in 125 plate appearances. My colleague Eric Roseberry highlighted the legitimacy of the 28-year-old outfielders offensive explosion in his Buyer’s Guide column earlier this week. It’s a fantastic piece. Go read it and then pick up Pillar if he’s still wading around the free-agent pool.

According to one anonymous source, Gonzalez is auditioning for a role in the upcoming “Man On Fire” remake, but I can’t confirm those details. Seriously, what more do you need to know if he’s still available on your leagues waiver wire? The 28-year-old is slashing .266/.368/.719 with nine home runs, 11 runs scored, 21 RBI and a pair of steals in just 78 plate appearances. Gonzalez has always had plenty of power, but managed to hit just 13 home runs in 518 plate appearances last season. Unless he completely craters, he has an outside shot at 25-to-30 home runs this year. The multi-position eligibility is a nice bonus as well. Ready for a hot take? Gonzalez is exactly who we thought Javy Baez would be.

It’s too early to draw any definitive conclusions, but we have enough data to begin discerning some signal from the noise. Especially when it comes to veteran pitchers like Morton. The first resource I turn to is the Baseball Prospectus Deserved Run Average Leaderboard. The 33-year-old owns a 2.43 DRA along with a 39:10 K:BB ratio over 34 innings this season. He’s averaging a blistering 96 mph on his sinker, but it’s his curveball (51 percent whiffs-per-swing) that’s been the secret ingredient to his success.

Morton has been a fixture in this space over the past month, so hopefully you already own him. If you’ve been hesitant to buy-in, this may be your final opportunity in shallow mixers.

The first DRA darling of the year! 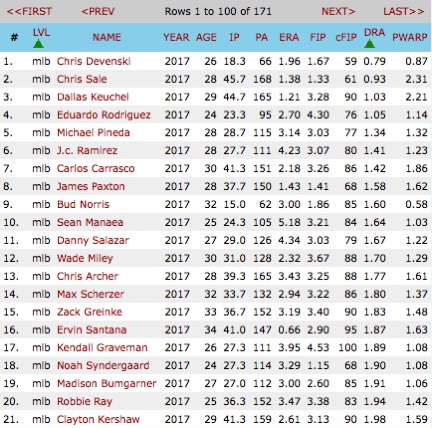 The 24-year-old southpaw’s 1.05 DRA represents the third-best mark of any starter this season. It’s nearly two runs lower than his actual ERA (2.70) and also checks in three runs below his FIP (4.30). How is this possible? Well, Rodriguez strikeout rate has spiked from a rather pedestrian 7.79 K/9 over 41 starts over the past two seasons, to a sublime 12.0 K/9 in five appearances (four starts) in 2017. Obviously, striking out opposing hitters is one of the most important attributes any starter can possess. DRA tends to favor those who rely eschew batted ball luck and run mammoth strikeout rates.

The uptick in strikeouts isn’t coming out of nowhere. E-Rod posted a sparkling 3.24 ERA with 79 strikeouts (9.15 K/9) in 77 2/3 innings over his final 14 starts to close out last season. His control (14 walks in 23 1/3 innings this spring) remains a work in progress, but he’s beginning to develop into the legitimate front-end starter many envision when he debuted in Boston two years ago. There’s no reason he should still be available in competitive mixed leagues.

Trick question. They’re both Alex Wood. The 26-year-old left-hander failed to make the Dodgers rotation out of spring training, but has filled in admirably over four starts. However, he’s been vastly superior as a reliever this season. The performance gap may be related to his stamina coming off elbow surgery. Wood was brilliant for a six-start stretch (2.80 ERA with 50 strikeouts and just eight walks over 35 1/3 innings) before going down last May. It’s understandable why Los Angeles has been hesitant to push him.

Even if he’s ultimately sent back to the bullpen, he’s still going to have plenty of fantasy value, especially if he’s used in a multi-inning role like Houston does with Chris Devenski. Wood isn’t a superstar, but he’s proven that he can excel in either role, which makes him a viable mixed-league asset in the current injury-ravaged pitching landscape.

15-Team Mixed Leagues (Must be available in at least 75 percent of ESPN, Yahoo, or CBS leagues)

The Dodgers outfield is more than a bit overcrowded, especially with uber-talented rookie Cody Bellinger joining the mix, but the 24-year-old righty-masher is off to a sizzling start. He’s hitting a staggering .423 (11-for-26) with a pair of home runs, eight runs scored and five RBI over the last week. One of my favorite bench options in leagues that utilize daily transaction formats, all you have to do is follow the Dave Roberts game plan: plug him in exclusively against right-handed pitching, and let him eat. Sometimes fantasy analysis is really this easy.

I can’t believe it either. If it’s any consolation, I strongly considered Yonder Alonso for this spot. However, given the insane amount of depth at first base, I elected to go with Aybar instead. He could be a more viable option in NL-only formats, but he’s hitting at the top of the Padres order, and has chipped in a decent amount of power and speed (three home runs and three steals) over 28 games this season. The power is a bit unexpected, but if he can get back to double-digit steals, Aybar becomes a decent middle-infield option in crazy deep mixers.

At first glance, endorsing Cahill as a fantasy option feels like a worse decision than letting Ja Rule organize another music festival. It’s not. Trust me. The 29-year-old (seriously, how is he only 29) hasn’t ventured into auto-start territory yet, but he’s right on the precipice. In addition to a career-high 11.10 K/9, Cahill owns a 3.60 ERA (2.04 DRA), and a 59 percent ground-ball rate over his five starts this season. Not too shabby for a guy that was pitching low-leverage relief innings for the Cubs last fall.

Cahill’s swinging strike rate (13.3 percent) is the eight-best mark of any starter in baseball this year, thanks in large part to a stellar curveball. Per BP’s PITCHf/x leaderboards, the pitch is generating a major-league leading 52.73 percent whiffs-per-swing. It’s crazy. His next start comes at home against the Dodgers on Sunday. It’s a close call, but the strikeout and ground-ball profile mitigate the vast majority of the implosion risk. He’s a must own in deeper mixed leagues. 2017 is weird.

Speaking of weird. I’m not completely sold on Ramirez, who has pitched for five different organizations in four years, but even the most grizzled industry skeptic has to admit that the first four starts of his career have been outstanding. It’s especially remarkable considering his extensive track record of mediocrity as a reliever. Ramirez has passed both the eyeball (12.1 percent swinging-strike rate) and advanced metric tests so far. The 28-year-old’s 1.41 DRA ranks sixth out of 171 pitchers with at least 15 innings of work this season. He’s striking out over 10 batters per nine, and draws the red-hot (but strikeout-prone) Astros lineup this weekend. I’d be reluctant to use him for this start if it in Houston, but I’m giving him the green light at home. I’m a DRA disciple and the numbers say to believe in the early returns. Let’s do this.

AL/NL-only Leagues (Must be available in at least 95 percent of ESPN, Yahoo, or CBS leagues) 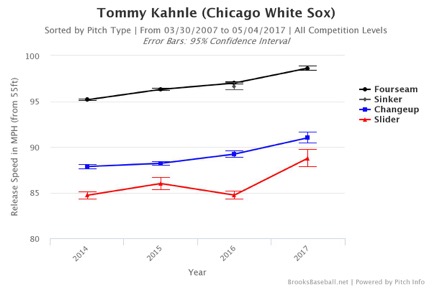 Oh, hello. Kahnle has posted a 0.76 DRA while striking out 19 batters and issuing just two walks in 10 innings this season. Is that good?

Do you really want to own Fernando Rodney? I’m not a fan of stashing speculative closers, but in an NL-only, I firmly believe that De La Rosa is worthy of a stash. He made his first rehab appearance, earlier this week at High-A Visalia.

Obviously, veteran JJ Hoover is the clear-cut favorite to ascend to the closer role should Rodney lose the gig, and his elbow issues are a serious concern. However, De La Rosa posted a career-best 3.45 DRA last season and has always had electric stuff. He could thrive in a one-inning relief role. I’ve been saying this for years.

You need to be logged in to comment. Login or Subscribe
huztlers
Re: Rubby DLR - I don't think that PRP (Platelet Rich Plasma or stem cells)has ever led to a successful outcome on a pitcher's UCL, which is the route that Rubby went. I am sure some average Joe might be able to get results from PRP, but I am very skeptical that his elbow will hold up. If he would have just underwent TJ, he would be nearing rehab at this point as well and would have a much brighter outlook.
Reply to huztlers
GeorgeBissell
It's completely fair to be skeptical of De La Rosa's immediate and long-term health. Especially considering he has had Tommy John surgery once already and had a setback in his recovery trying to pitch through the elbow injury last fall. With that being said, he's going to be asked to pitch one-inning stints, and won't be used in back-to-back games. I think he can be very successful in that type of a role. In an NL-only league, where there is nothing on the waiver wire, I'd take a chance.
Reply to GeorgeBissell
MikePemulis
Climb the Trevor 'K-Hill'
TM

There's something there.
Reply to MikePemulis
GeorgeBissell
Nicely done. I was really impressed with his Colorado start at home. Had a great approach against them, executed his game plan. He's got a big test coming against the Dodgers on Sunday. I'm not comfortable starting him for it (unless I were desperate), but if he pitches well, he's getting the green light for awhile.
Reply to GeorgeBissell
Robotey
other than Rubby, any deep NL-only picks? I was lucky to grab Pham last night, but other than that, not much out there. Thanks
Reply to Robotey
hahmad08
When I look at the DRA tool I see Morton with a DRA of 3.03. Doesn't look like he has started since this was posted, so how does that reconcile with your noted DRA of 2.43? Would that change your recommendation to get him?
Reply to hahmad08
GeorgeBissell
DRA is constantly updated by the BP stats team, I don't have any control over that number. They've made an update since last week. Frankly, I don't really care what Morton's ERA is because he's healthy and consistently racking up strikeouts. Those are the important variables to consider.
Reply to GeorgeBissell