Welcome back to the second installment of our 2017 Fantasy Categorical Breakdown series. If you’ve been following closely, you’re aware that the birth of the Rob Manfred era has catalyzed a high-octane offensive environment and dramatically reshaped the fantasy landscape over just a two-year span. As league-wide home run totals continue to skyrocket, nearly a quarter of all plate appearances now end in a strikeout, and stolen bases have declined to their lowest level in decades.

The primary aim of this series is to analyze the impact of these recent contextual trends and how fantasy owners should respond in 2017. For each fantasy category, we’re providing a 10,000-foot overview—such as this article here—to go along with a specific article highlighting 2016’s over/underachievers and another targeted exclusively for deeper leagues. Now, let’s close this series out in style by taking a walk.

After five years of steady, linear decline, the league-average walk rate has ticked back up slightly in each of the last two seasons. While major-league batters struck out in nearly a quarter of their plate appearances last year, they did manage to draw a free pass 8.2 percent of the time, the highest rate since 2009. 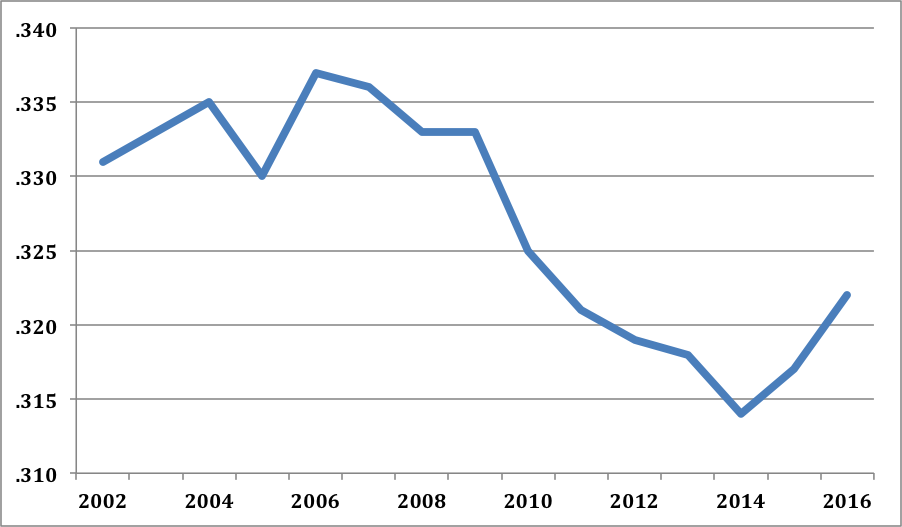 Unsurprisingly, the recent uptick in on-base percentage, which rose to .322 by the end of the 2016 campaign, has mirrored the broader league-wide offensive surge of the past two seasons. From a fantasy perspective, one of the biggest keys to identifying hitters that can provide a boost in on-base percentage leagues is to focus on individual hitters walk rates as opposed to BABIP, which can be impacted by a great deal of noise, and much tougher to forecast year to year.

Less than one-third (41) of the 146 hitters that accrued enough plate appearances to quality for a batting title, posted a walk rate above 10 percent last season. My colleague Eric Roseberry will feature the majority of these stalwarts in his “The Adjuster” columns each week during our 2017 player preview series. However, for the purposes of this landscape-style overview, it’s critical to highlight some of the more prolific performers in the category.

No hitter in fantasy baseball is more synonymous with the phrase, “he’s worth more in an OBP format,” than Carlos Santana. The 30-year-old first baseman has recorded nearly as many walks (638) as strikeouts (718) during his seven-year career. While he owns an underwhelming .241 batting average, he’s drawn more walks (320) than any other hitter in the game over the past three seasons. The result is a robust .363 on-base percentage. Only vaunted sluggers Joey Votto, Jose Bautista, and Bryce Harper have posted higher walk rates during that span. Before we transition into the overall leaderboards, let’s take a look at the 12 hitters that have posted a walk rate above 13 percent over the last three seasons combined.

Joyce is easily the most intriguing name on this list for fantasy purposes in 2017 drafts. Coming off a dismal 2015 campaign in Los Angeles, he rebounded with a monster bounce-back performance in the Steel City. In addition to hitting .242/.403/.463 with 13 home runs in 293 plate appearances, the 32-year-old’s walk rate also spiked from 10.6 percent the previous season, to a staggering 20.1 percent last year. If you’re searching for an undervalued OBP asset, one whose value is built primarily through taking free passes, he’s the perfect target.

Only six hitters on the above list (Altuve, Murphy, Blackmon, Pedroia, Martinez, and Segura) posted a walk rate below 10 percent. Of that select group, Pedroia was the only one to record a sub-.347 BABIP. Elite power hitters in the mold of Cabrera, Donaldson, Freeman, Rizzo, and Bryant populate the vast majority of the list. This isn’t a surprise. Not only do they draw an above league-average share of walks, but they also run extremely high BABIPs, fueled by persistent hard contact every year.

You need to be logged in to comment. Login or Subscribe
bhacking
Thanks, I play Scoresheet so "The Adjuster" is a key part of planning every year.
Reply to bhacking
GeorgeBissell
Nice! I'm glad to hear that. As a staff, we make it a priority every offseason to cover as wide a range of formats and categories as possible. If there is a topic or category that we aren't covering that you want to see, don't hesitate to ask us.
Reply to GeorgeBissell
gregarakaki
I'm not sure how relevant this is, given that the players and their OBP abilities aren't normally distributed random variables, but do you have the standard deviations for the stats presented in the first graph? Its clear the top performers are well above the average, but where the next tier falls in is what I'm interested in...
Reply to gregarakaki
lipitorkid
While the first chart is interesting to me as a baseball fan, it's less useful to me as a fantasy owner in an .OBP league. I don't care about MLB average I care about getting 7+ points in the category. Which means I care about "what's the .OBP average for the 150 rostered players in our league. Over the past 5 years in our league you could earn 7+ points in .OBP by having an .OBP between .331 and .340 with more years around .334. I wish there was an easier way to determine averages between rostered players in fantasy vs. the MLB average.
Reply to lipitorkid
GeorgeBissell
Appreciate the comment. I understand your argument that league-average statistics do not have a practical fantasy application. In the context of a general landscape article, they establish the general framework for the discussion. In order to determine the fantasy value of a single-point in OBP, you would have to go through the entire process of creating valuations. That's something my colleague Mike Gianella does here at BP. He has OBP dollar values for AL & NL only leagues from 2016: https://docs.google.com/spreadsheets/d/1Y24jbmaC04Jov_ZWFd6mOAHhIgouCnFmLfLPu9sRniQ/edit#gid=1970111762
Reply to GeorgeBissell