Normally, in this space, I explore one hitter or one pitcher in a more longform fashion. This week, though, I wanted to profile four specific players who have gotten a lot of helium in the second half. I’ll present my thoughts on each player and offer a buy/hold/sell recommendation on each, per usual.

Few major-league hitters have endeared themselves so quickly to fantasy owners in the second half like Perez. He’s hitting .304/.333/.547 since the All-Star break with nine homers and 16 stolen bases. The 25-year-old utility man ranks as the eighth-best fantasy player in the past 30 days.

Despite the gaudy numbers, several concerns remain: (1) he’s becoming much more pull-centric; (2) his swing-and-miss rate remains high; and (3) he’s never sustained this level of power in his professional career.

To address the first point, it’s worth noting that Perez is pulling the baseball 48 percent of the time. Only 12 players have pulled the baseball more this year. While that perhaps explains his power surge, Tony Blengino explains that this trend becomes exceedingly exploitable for major-league pitchers:

Over an extended period, pitchers (and advance scouts) recognize these harvesters, and place the ball where it’s very difficult to pull with authority. These guys are experienced and savvy enough to recognize and cash in their share of mistakes, but that’s it. They no longer control the dialogue.

The question, then, is whether Perez is a good enough hitter to consistently capitalize on mistakes with a power-laden, pull-centric approach.

Unfortunately, despite the uptick in performance, Perez continues to swing-and-miss 13.2 percent of the time and swings at pitches outside the strike zone 39.5 percent of the time. This should mean that he doesn’t have the patience or plate coverage to counter the adjustments pitchers should make to his “new” approach — which would make him merely a mistake hitter.

Not only would Perez become a mistake hitter, but he’d have to have supreme power to nearly always capitalize on those mistakes. The problem with that is Perez had never hit more than eight home runs in a professional season before 2016. The idea that he’s suddenly shed seven years of precedent to become a plus-power guy is very difficult to believe. I suppose there’s a chance he hits his 90th percentile projection, but, goodness, that’s nothing to bet on.

Miller is the 12th-overall fantasy player in the past 30 days, as he boasts a crazy-strong .295/.372/.626 slash line since the All-Star break. He’s doing what everyone yearned for him to accomplish a year ago in Seattle. A fresh start in Tampa Bay has seemingly allowed him to kick on.

One wonders about the legitimacy of this power binge. I’m skeptical. This isn’t just because Miller doesn’t have a history of hitting 20-plus homers, but also because he remains a limited player. He can’t hit lefties. He owns a .695 OPS against lefties and an .859 OPS versus righties. A total of 23 of his 25 homers have come against opposite-handed pitching. Thus, Miller seemingly needs to be utterly amazing against righties going forward to retain this level of production.

One thing Miller has done well is tighten up his strike zone. It may not appear that way, due to his 23.5 percent strikeout rate and a whiff rate that corresponds to his career norms. What those numbers hide, though, is a better handling of the overall strike zone. Take his zone profile from a year ago, showing his whiff rates: 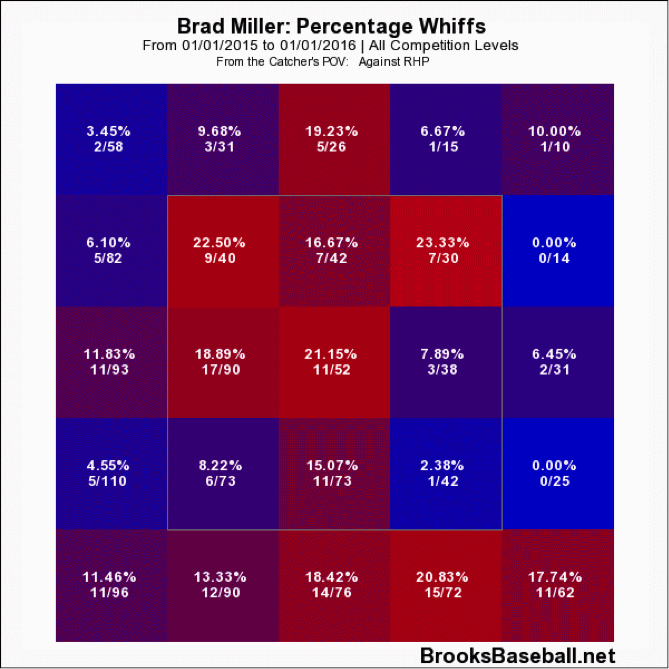 Compare that to this year: 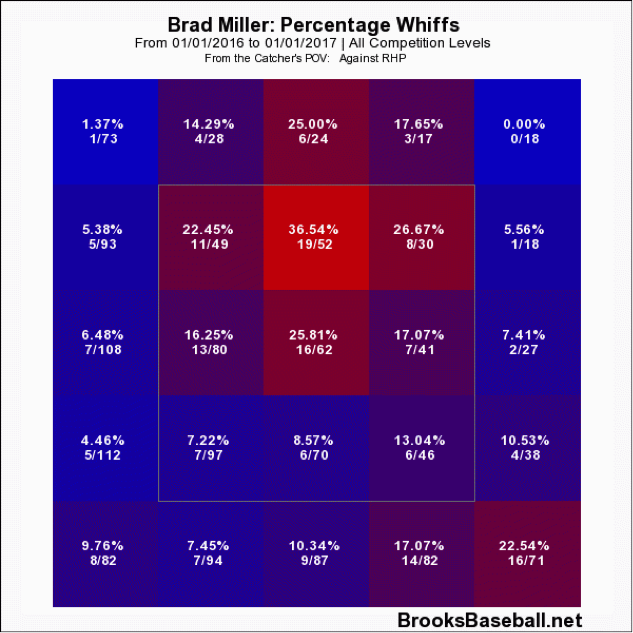 One can clearly see that Miller has become much more productive in the lower half of the zone, at least in terms of making contact. His 2015 heat map showed a hitter who struggled to put the barrel on the ball almost uniformly.

Unsurprisingly, Brad Miller has clobbered the baseball on the lower half: 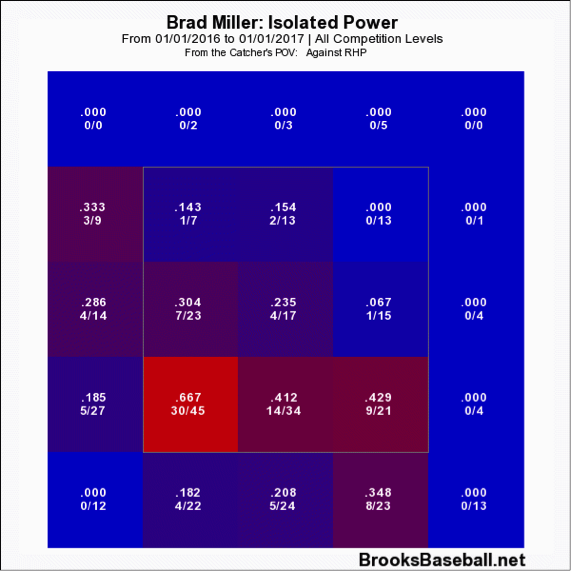 In this, we can see that Miller finally has an identity of sorts as a hitter. He’s a low-ball hitter and someone who can hit for power in the lower portion of the zone. The 26-year-old can still be exploited up and inside — such is a product of his swing mechanics — but it’s at least a step forward.

I’m still skeptical that he’s suddenly a 25-homer hitter. I do, however, think he’s showing signs that he could be more productive than he was in 2014 and 2015. I’m just not ready to buy too many shares until his power numbers can stabilize and we can see what he really is as a big-league hitter. It’s just too cloudy at the moment.

The veteran right-hander has been dynamic since the All-Star Break, posting a 2.83 ERA in 54 innings and striking out 22.4 percent of the batters he has faced. He’s been a top-10 fantasy starter over the last 30 days. Fantasy owners have been slow on the uptake, though, as Kennedy is only owned in 61.2 percent of ESPN leagues (late-season fantasy fatigue is surely a part of the low ownership rate).

I wrote the Transaction Analysis when the Royals acquired Kennedy this offseason, offering a far more sanguine opinion of the deal than most. I argued:

It seems the Royals are betting on the velocity gain holding for the next few years and the recent peripheral improvement being sustainable. They’re also targeting the type of pitcher that can hypothetically benefit from their defensive prowess and ballpark. But, most importantly, the Royals are addressing their rotation’s biggest deficit: innings. The fact that his ERA could be stingier in Kansas City is just icing on the cake.

The early returns of this deal have been tremendous for a club that was five games over .500 (as of Sunday morning) and in the thick of the Wild Card race. All of the bets that the Royals made with Kennedy have come to fruition.

It’s reasonable to focus on the 24.0 percent strikeout rate, as it shows that his improvements in San Diego have carried over to the American League, but too few people have noted that Kennedy’s stuff has improved. He’s throwing harder than he ever has: 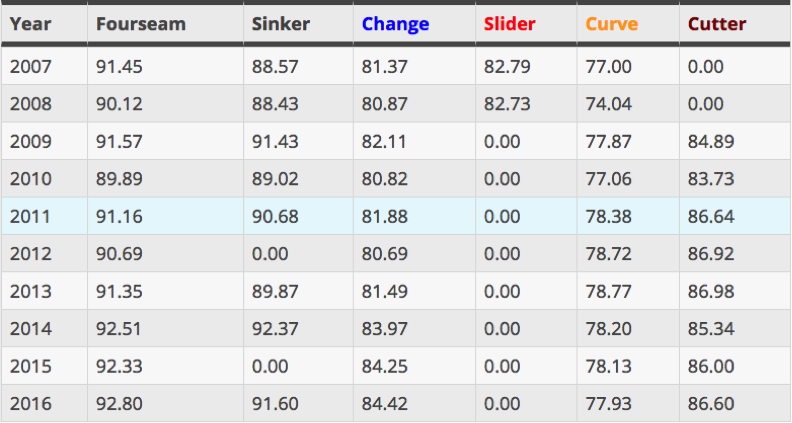 Pairing that velocity increase and attractive strikeout rate with a Royals defense that remains one of the best in the league, it’s not surprising that his BABIP has taken a nosedive to .264. A combination of fly balls, Kauffman Stadium, and the Royals’ outfielders is a good recipe for batted-ball improvement—and it’s those types of things for which FIP doesn’t account. It’s why he can have a 4.68 FIP but his DRA is down at 4.11, even if I’d argue that these types of metrics don’t handle situations like Kennedy’s too well.

I was higher on Kennedy coming into the year than most. I don’t really plan on bailing now, especially since he’s doing everything we said he needed to do in spring.

You need to be logged in to comment. Login or Subscribe
leh1935
Its good to see Perez have success. He is another former Detroit farm hand that they gave up on for nothing in return. At least they got Anthony Gose for Devon Travis.
Reply to leh1935