Known to have extreme signability concerns as a recent high-school graduate heading into the 2009 draft, Hutchison slid all the way to the 15th round, where the Blue Jays popped him with the 460th overall pick. They ultimately signed him away from college—quite literally—for an absurdly over-slot $400,000 bonus and the promise of eight semesters of public university tuition. When drafted he was lauded for his command, advanced feel for an arsenal that included a plus changeup, and requisite physical projection. He accordingly made quick work of the low minors in 2010, and his 2011 was even better, as he advanced three levels and put together a combined 2.53 ERA with 171 whiffs in 149 1/3 innings. He forced his big-league debut the following summer and managed to log 11 starts before ol’ Tommy John jumped up and bit him. After a 2013 rehabilitation tour that culminated with a trip to the Arizona Fall League, he earned a rotation spot in Toronto out of spring training in 2014, which he held until a September fade this summer led to his demotion to the bullpen and ultimately his exclusion from the ALDS roster.

Mmm… well, he won 13 games, so… there’s that. He also posted an almost exactly league-average strikeout rate, so he didn’t actively harm you in that category on a per-inning basis.

Those 13 wins and that mediocre whiff rate propelled him—propelled, I say!—to the 185th-most valuable season by a starting pitcher in standard formats this year. For a pitcher who entered the year with a good amount of sleeper cache and end up going off the board 57th among starters in NFBC drafts last spring, that really wasn’t very good at all. His 136 DRA- was the fifth-worst mark by any pitcher to throw 100 innings in 2015, though his 104 cFIP checked in a more respectably mediocre 83rd. He was done in by the third-worst strand rate in the league, and his above-average .343 BABIP was well-earned by one of the highest line drive rates in town. He was actually okay when he managed to keep the ball on the ground, as his average exit velocity on worm-burners knocked on the door of the top 40. Unfortunately for Hutchison, he posted a well below-average groundball rate, and balls in the air were hit harder off him than the average bear. Batters slugged .512 against his primary weapon, the four-seam fastball, and he failed to generate an above-average percentage of whiffs with any of his pitches for the year. For good measure, he also did a poor job holding runners on, and he gave away one of the highest rates of free passes with wild pitches and passed balls. Wheeee. 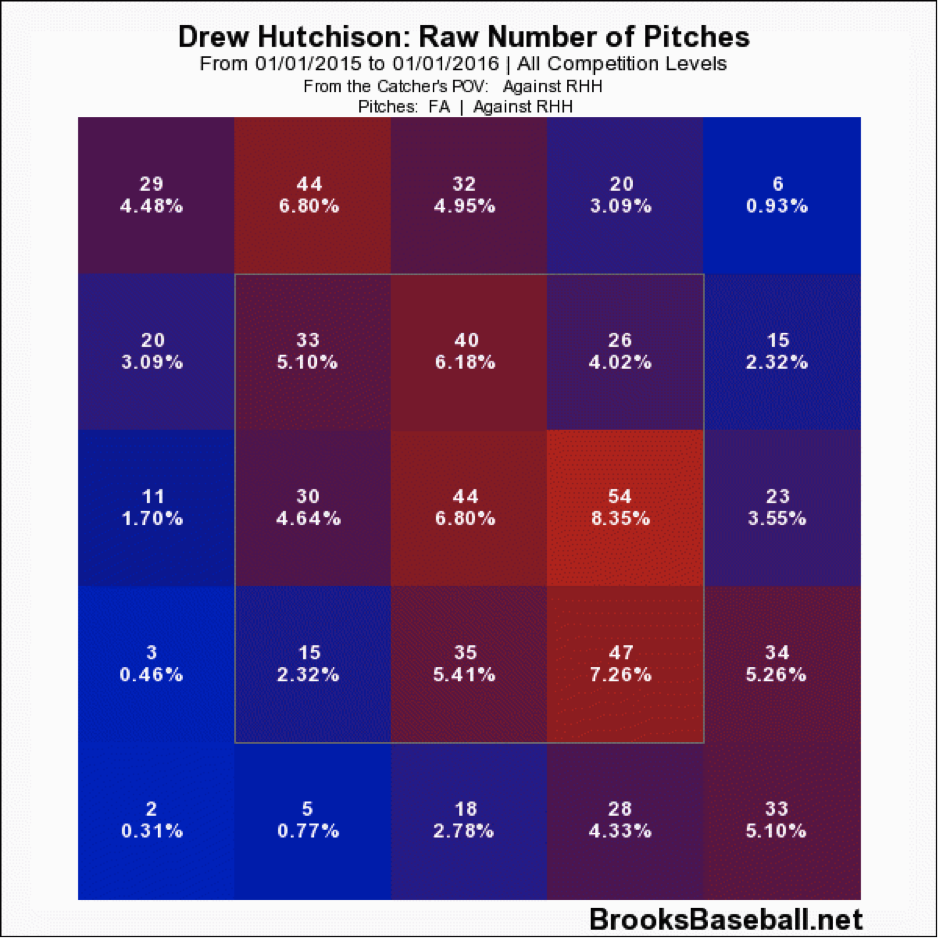 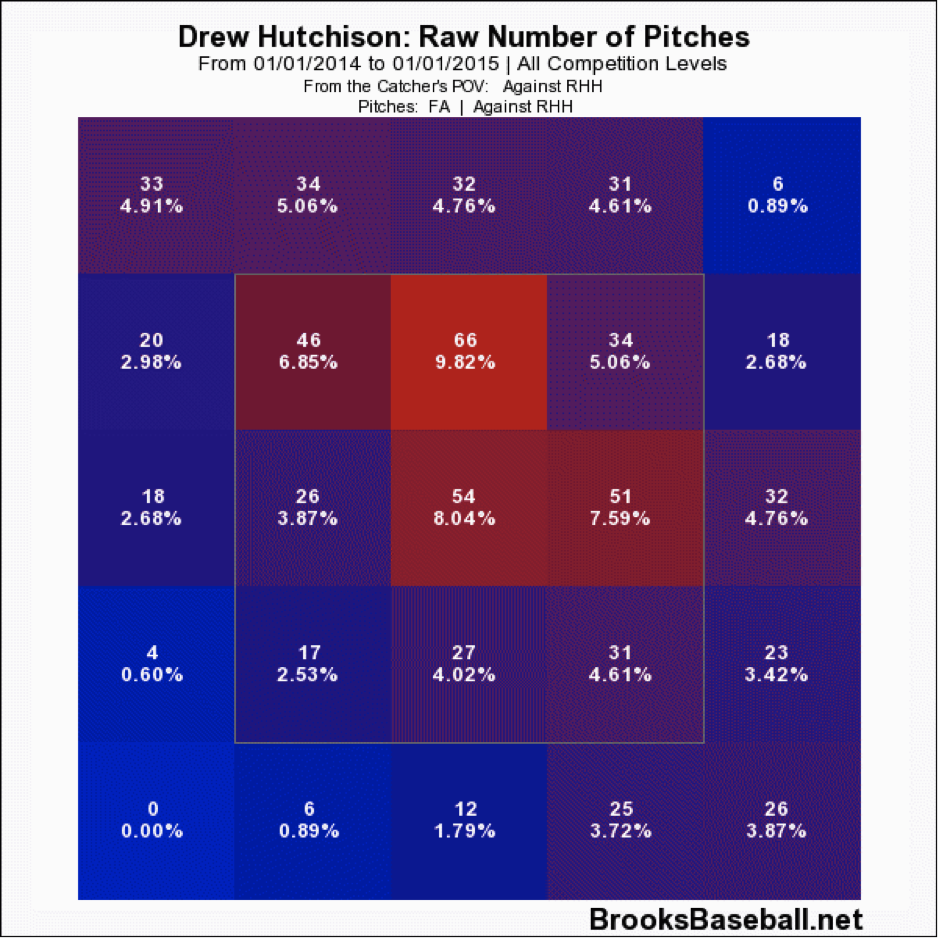 He made a pretty clear and concerted effort to work more into the zone with the gas, trying to keep the ball down to the outer third rather than living and dying with elevation as he had. That turned out to be a poor plan of attack, however: A year after right-handed batters hit .212 and slugged .352 against the heater, they teed off to the tune of a .358 average and .629 slugging percentage. Every right-hander who swung at his fastball wasn’t quite Bryce Harper, in other words, but he wasn’t far off.

His second big problem was with his slider to left-handed hitters. Lefties offered at the slide piece down and in about 14 percentage points less often in 2015, and he lost about ten percentage points of whiff rate when they did. After hitting .079 with a .143 slugging percentage against the pitch last season, left-handers hit .259 and slugged .448 against it this year. He didn’t groove the pitch more often, but it got tattooed a lot more frequently than it had, suggesting the possibility of predictability in its deployment.

On the one hand, this season was such a tire fire that I should probably just write “who cares, don’t draft him” and move on. But the jarring leap from a guy with solid splits against same-handed hitters to a guy that got absolutely crushed by same-handed hitters despite consistent velocity and movement suggests there may have been some fishy strategic decisions at the root of his issues for much of the season. Given his flyball tendencies last year and home park, and given the zone data showing the southern drift I highlighted above, it wouldn’t be a tremendous leap to assume that lowering his flyball rate was a point of strategic emphasis for Hutchison this season. He technically did do that, and he generated softer contact overall to boot. Problem is, his arsenal as presently constituted does not seem compatible with the approach he took in 2015, and he traded many of those flyballs for line drives.

That the circumstantial evidence points to an issue of strategy as opposed to mechanics or a decline in stuff is encouraging, insofar as Hutchison has shown flashes of the ability to pitch well at the major-league level and he’ll still just be all of 25 years old for the majority of the 2016 season. I don’t think he’s broken beyond all repair, and as a $1 end-game flyer in AL-only and deeper mixed leagues, he should be a perfectly reasonable play. If he goes and gets himself traded to a more spacious ballpark this winter, it’s possible he’ll even generate some lower-fi sleeper buzz again.

It’s probably too early to say that 2016 will be a make-or-break year for Hutchison—both in fantasy and in real life north of the border—but it’s certainly set up that way on paper. He’s arbitration-eligible for the first time right now, meaning his price tag will jump significantly beyond his production by next winter if he throws up another subpar season, and that would greatly enhance the likelihood of an offseason trade or even raise the specter of a non-tender. For now, Hutchison’s longer-term dynasty value is quite limited given the recent track record of poor performance and the uncertainty his contract situation raises about his future beyond the coming season. He’ll enter 2016 a volatile player capable of significantly boosting his dynasty-league value with a decent campaign or quickly fading off the map in most formats with another clunker. The upside of an SP4 in standard mixed formats is still in there somewhere, but time is going to start running out quickly for him to find it.