Progress isn’t linear. It’s never been a question of talent with Rubby De La Rosa, but rather doubts about whether he could make the necessary adjustments to remain a major-league starter, without which he’d ultimately be destined to move to the bullpen. It’s been extraordinarily difficult to exercise patience over the last few years with De La Rosa, who has struggled mightily at times. However, the wait for him to unlock his immense potential might finally be over, thanks to a subtle adjustment to his arsenal against left-handed batters and the addition of catcher Welington Castillo.

The De La Rosa project played out like the Star Wars saga in Boston last year. He was flat-out dominant, a true sensation right out of the gate (Original Trilogy), firing seven innings and allowing one earned run or less in six of his first 11 starts. Unfortunately, he failed to reach the seventh inning in each of his final seven outings (Phantom Menace). A slew of lackluster performances (7.11 ERA last September) ultimately got him shipped out of Boston in the offseason.

A dismal start to his tenure in Arizona (5.84 ERA over his first 12 starts) cast even more doubt on his future as a starter. But since then, he’s transformed into a viable fantasy option, even in deeper mixed leagues, virtually overnight. Over his last four starts, all of which came against NL West opponents (San Francisco, San Diego, Colorado and Los Angeles), he’s allowed just four earned runs over 27 2/3 innings while striking out 23 batters and issuing just seven walks.

After getting shelled for nine earned runs by the Dodgers on June 8th, De La Rosa saw his ERA bloat to 5.84. Thanks to his recent hot streak, he’s lowered his ERA to a more respectable 4.60. That palatable considering the righty's most valuable fantasy attribute is his ability to rack up strikeouts, and he currently ranks among the top 30 (tied with Zach Greinke for 27th) starters in baseball with 94 strikeouts (and just 26 walks) in 101 2/3 innings of work this season.

It’s a strange, but probably telling, coincidence that De La Rosa’s recent surge has corresponded with the arrival of Castillo, who the Diamondbacks acquired from Seattle in the Mark Trumbo deal back in early June. You may remember the D'backs boldly treading into the current campaign with career backup Tuffy Gosewich as their starting backstop, which not only led to a plethora of bold rationalizations by GM Dave Stewart, but also had a huge impact on Arizona’s young rotation, especially De La Rosa.

The De La Rosa-Castillo relationship isn’t a myth: The pair reportedly played together for years while they were growing up in the Dominican Republic. And the results since the former Cub has been inserted behind the dish for each of his old mate's last four starts have been both immediate and noticeable.

“He's getting better mentally because he's always had really good stuff,” Castillo told Jake Rill of MLB.com. “That's part of my job to calm him down because it's not easy to get rid of bad habits. I just try to calm him down and let him make the pitch that he needs to make.”

It may be a simple narrative-based storyline to chalk up De La Rosa’s recent surge to the addition of Castillo, but it’s more than that. Intangibles matter (just look at the Pirates and Indians), but the data tells us that he’s certainly changed a few things, especially his approach versus left-handed hitters, who have been his kryptonite his entire career.

Despite his recent run of success, opposing southpaws have still posted a staggering .901 OPS against De Le Rosa in 215 plate appearances this season. Of the 16 home runs he’s allowed, which is the seventh-most of any qualified starter, 11 of those have been struck by lefties. So what has he done over his last four starts to neutralize the damage? 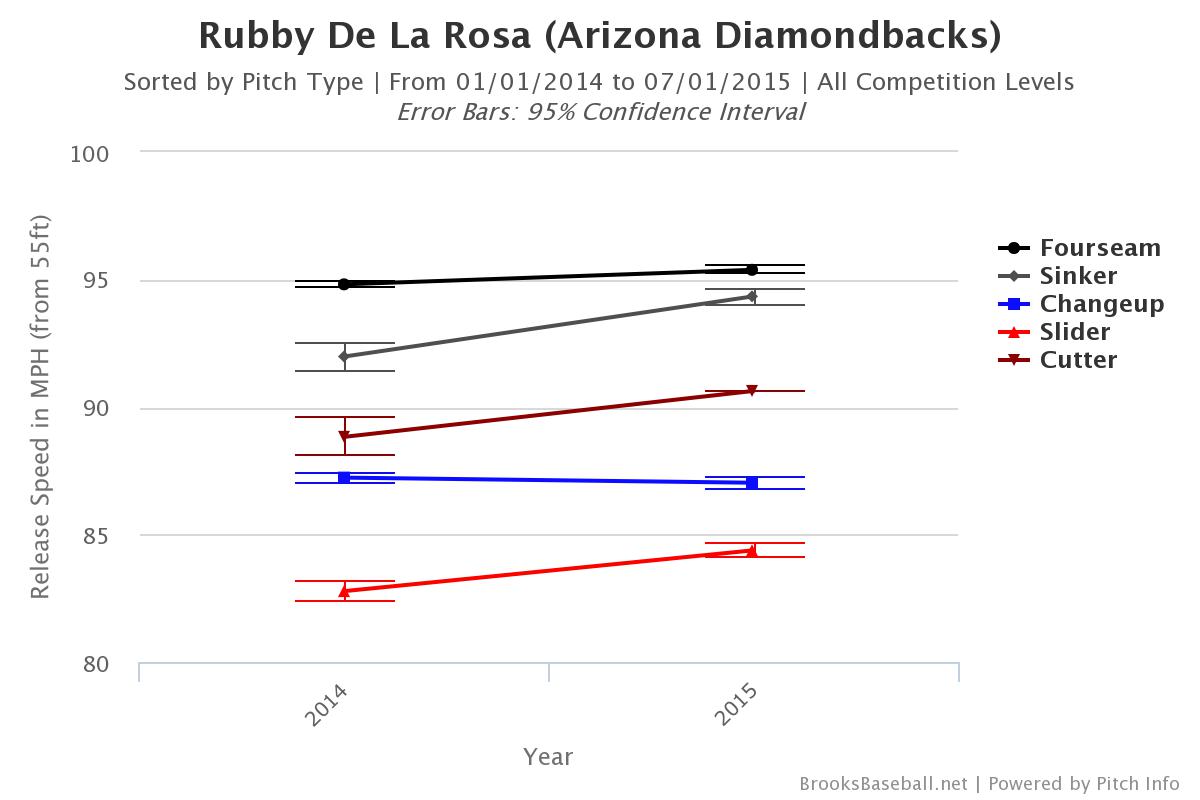 In addition to the uptick in velocity, De La Rosa has also broken out a sinker as his new primary weapon against southpaws. He’s thrown the pitch more than ever before over the last month, but strictly against left-handed batters. Not only has the pitch subdued lefties, but it’s also led to a staggering (near-elite) 54 percent ground-ball rate over his last four outings. Exchanging flyballs in favor of grounders has enabled De La Rosa to (temporarily) nullify his two biggest weaknesses (lefties and home runs) at the same time. 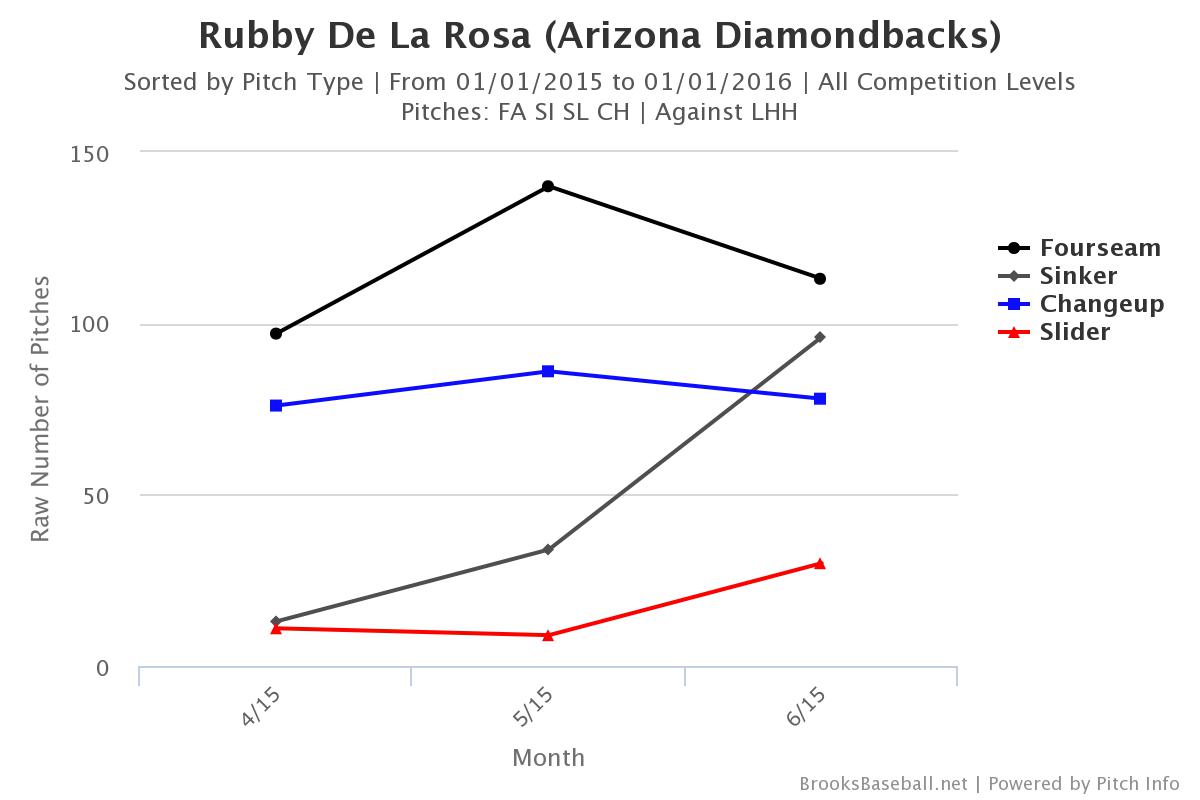 For the sake of comparison, and to confirm that this is a targeted assault on left-handed batters with the sinker, here is De La Rosa’s pitch usage against right-handed hitters this season. 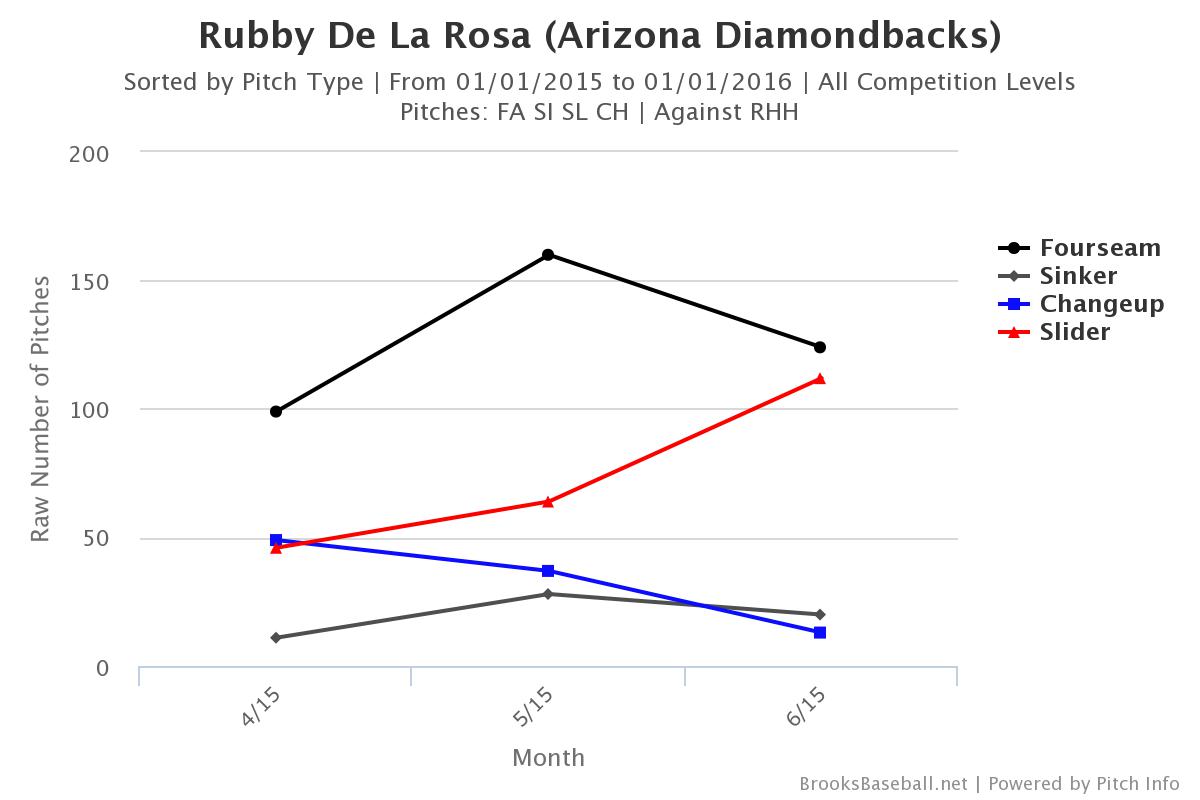 De La Rosa’s last outing, a no-decision against the lefty-loaded Dodgers lineup earlier this week, served as the ultimate barometer for the legitimacy of his newfound success with Castillo behind the plate. While he did surrender an opposite field home run to lefty Yasmani Grandal, he held Los Angeles to just a pair of runs on six hits while striking out seven over 5 2/3 innings. He’s by no means a finished product, but he’s making strides in the right direction thanks to Castillo and a new approach against lefties.

De La Rosa’s 3.88 Deserved Run Average (DRA) ranks 55th out of 102 qualified starting pitchers this season, but his 94 cFIP, which is a predictive pitching metric, is tied with fantasy stalwart Dallas Keuchel for the 38th-best mark of any starter. To put that in perspective, cFIP projects that De La Rosa’s performance for the remainder of the season will be slightly better than the major-league average. No matter how you slice it, De La Rosa was a fantasy afterthought just a few weeks ago, and now he’s showing signs of evolving into the type of strikeout artist we all envisioned many moons ago.

You either evolve or you perish as a starter in baseball. De La Rosa is choosing to evolve. The time to invest in all fantasy formats is right now, before the rest of your league-mates start to notice just how well he is pitching.