Welcome to another Thursday edition of Fantasy Rounders, in which I take a step back from the competition to survey the wreckage and dive into the finer points of the DFS game. Following a rough start to the season, my takeaway from last week was that I needed to reel back the daily investments while I re-calibrated for the 2015 season, and I stuck to said plan by investing just $18 to $33 for each of the next five days. My goal was to let everything settle down while I focused on individual player value for the current time window, and the lowered stakes allowed for some extra freedom for experimentation when constructing lineups.

My performance was relatively stable in the past week, especially when compared to the chaos that preceded it. Let's take a look at my daily points distribution in graphical form: 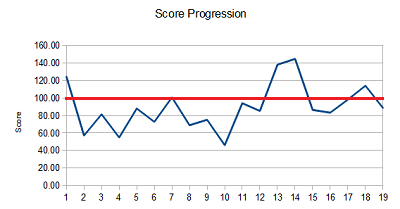 The X-axis represents the progression of lineups that have been used this season. I will sometimes have multiple lineups in a single day, either because I am rolling the dice on multiple wild cards or because there are attractive half-leagues in the Late and Early competitions that day on Draft Kings; as a result, the linear count does not quite match directly with days of the season.

I generally shoot for a roster that I think can score 100 or more points on a given day (the thin red line in the graph), as I have found that to be the typical profit threshold based on the games that I choose to play. It also makes for some easy math with a $50k budget, as I just aim for two points for every $1000 spent. Up through my tenth roster of 2015 (which occurred on April 14), I had averaged just 77 points per lineup; in the nine lineups since, I have averaged nearly 104 points per roster and had a single-game low of just above 83.

The points-per-game numbers underscore the recent change in performance, but not much changed from the standpoint of lineup construction – I just hit with risky pitchers rather than get demolished by blow-up starts. Arms belonging to Trevor Bauer, Jake Odorizzi, Anthony DeSclafani, and Archie Bradley proved to be solid investments in the last week, though I could have done without David Price's deja vu game against the Yankees. I did lean a bit heavier on established (read: expensive) starting pitchers in light of the bumpy starts from greener arms in the early-going, but the excellent performances from less-heralded hurlers is what distinguished the past week from the first set of games.

I went a bit bigger on April 21st, investing $56 due to the perceived strength of my roster. I felt that it was the best team that I have constructed so far this season, and since part of my revised approach is to pick my spots for going heavier, this presented the perfect opportunity. The gamble paid off decently well, including an $82 return ($26 profit), with a tip of the cap to Jose Altuve's bases-clearing double and ensuing stolen base in the 11th hour of competition. The outcome was riding on a razor's edge but the process was sound, as an honest assessment of roster strength is part of a careful investment strategy.

Last Thursday, I focused on the changing landscape of the Draft Kings market for player prices, noting the day-to-day volatility that had been introduced, the contextual indicators that were driving those price adjustments, and also the ripple effects of an elevated cost for elite hitters. Context was driving prices higher than I had ever seen before, resulting in a $6600 Anthony Rizzo who was playing against Kyle Kendrick in Coors Field. I noticed that most of the Cubs and Rockies hitters were expensive that day, with every batter that was priced at or above Starlin Castro clearing the $5000 bar, and the high costs prevented the common strategy of stacking hitters in Coors (an alteration that I applauded).

The Rockies played nine of their first 12 games away from home, so I was anxious to see how the market was shaken by their current seven-game homestand. I had expected that Draft Kings might reel back the costs in response to ownership habits in the first weekend of high-altitude ballgames, but on Monday I was surprised to see a number of affordable options among the biggest bats in the Colorado lineup, causing me to fall into the trap of stacking Rox for a day. Rockies bats were still relatively affordable on Wednesday, and though the cost for Padres bats had certainly been raised to account for the environment and the opposing pitcher (Kendrick), the overall cost for the priciest options was much lower than we had seen the previous weekend. 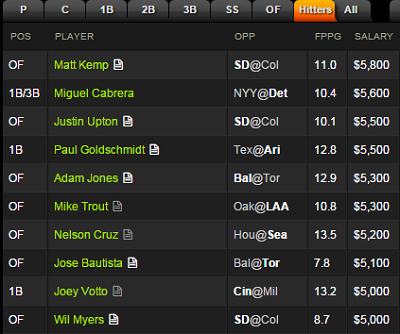 Each member of the new Padre outfield made the top 10 list for hitter pricing, with Kemp's top billing and the $5k for Wil Myers best exemplifying the degree of adjustment. The ability of Padres starter James Shields acted to mute the cost of Colorado bats such as Troy Tulowitzki, Nolan Arenado, and Corey Dickerson, but I was surprised that none of these hitters cleared $5k given the fireworks potential of that ballpark.

The Draft Kings market is still taking shape, and these fluctuations in pricing strategy require the gamer to be quick on his/her feet to stay ahead of the competition. Every DFS manager is bound by the confines of the same player pool, so everything is relative, and a player's daily value is sensitive to supply/demand as well as the statistical variables. The pricing environment could change tomorrow, but it seems that the market is stabilizing with an emphasis toward ballpark factors and quality of opponent in determining day-to-day player costs. The overall cost of the hitter pool appears to have been raised, spreading out the talent to minimize player overlap, without going to such a steep cost that gamers avoid them altogether.

I can't wait to see what's next.