I’d like to start by offering a scalding #hottake: Matt Holliday has been very good at hitting baseballs in his career. Since his 2004 debut he’s posted the eighth highest batting average (minimum 4,000 plate appearances), hit the 13th most homeruns, driven in the sixth most runs, and scored more times than every other Major Leaguer but three. He is, however, also rapidly closing in on his 35th birthday as of this writing. He’s also coming off a season in which he failed to crack the top 50 among hitters in standard league value, returning “just” $20 of mixed league production in 2014. That development necessarily begs the twin questions of whether Holliday has started his inevitable decline in earnest, and how he should in turn be valued for 2015. So let’s take a look under the hood and see what changed last year, and then hopefully we can figure out whether 2014 was in fact the beginning of the end.

Here’s a basic chart showing some notable metrics in his performance portfolio since he turned 30 and headed east to St. Louis, along with his relative ranking among outfielders in the triple slash categories:

Beyond the relative consistency of Holliday's age-31-to-33 seasons, a couple things stick out in this chart. Despite the significant drop in overall production in 2014 Holliday still managed to post a top-10 season among all outfielders in on-base percentage. The implication should be obvious for those in OBP leagues, where Holliday still retains a significant value advantage heading into next season. What's most interesting, however, is how he managed to sustain a relatively high OBP despite a significant plunge in his batting average.

He very marginally improved his overall swing rates, but showed particular improvement his contact rate against breaking balls. The problem was, the additional contact he did make against breakers was much weaker than in years past. In 145 at-bats ending on a slider or curve he hit .228 with a .317 slugging percentage, compared to .275 with a .490 slugging percentage in the PITCHf/x portion of his career going back to 2007.

Part of this development was no doubt the result of a new approach pitchers took in attacking Holliday with fastballs. Here’s how pitchers went after Holliday with hard stuff from 2010 to 2013, followed by the fastball approach they deployed in 2014: 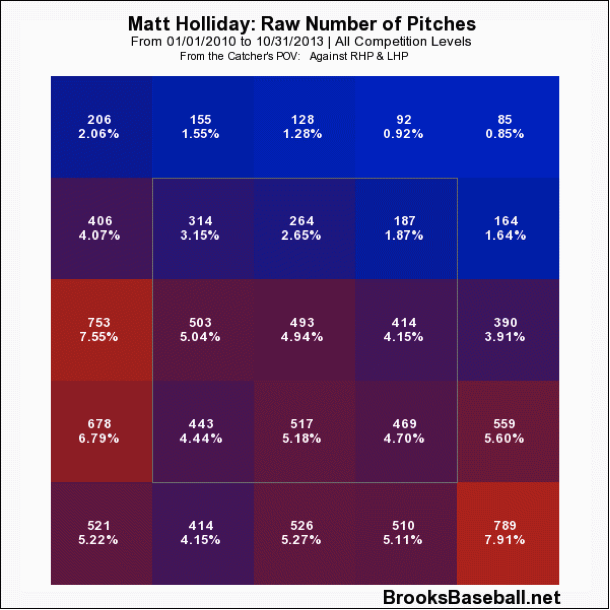 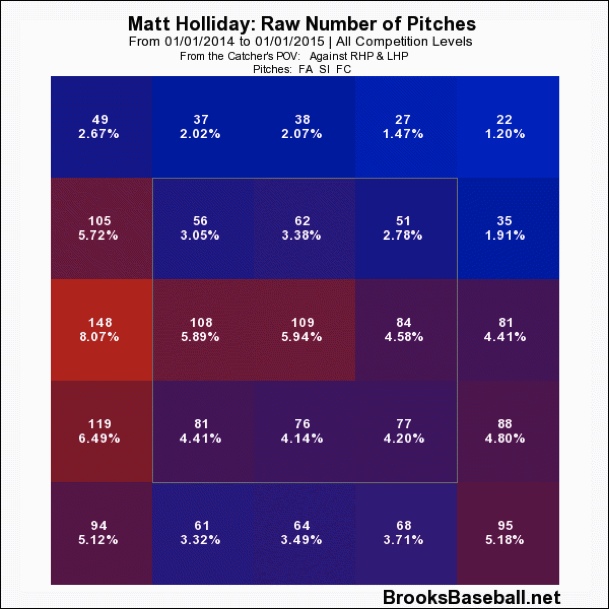 There’s a pretty clear pattern here of pitchers trying to bust Holliday in with fastballs much more frequently than they have in the past, and that strategy was born out by a substantial jump in the number of hit-by-pitches Holliday endured last summer: 17, compared with either eight or nine in each of the previous four seasons. The hard stuff in set up Holliday for a greater vulnerability against bendy stuff down and away, and while his excellent bat-to-ball abilities allowed him to maintain his contact rates when pitchers set him up with that sequence, he wasn’t able to drive the ball with his customary authority in those situations.

The other interesting takeaway I have from the chart is that when Holliday hit the ball in the air it went more or less as far as it always has during his St. Louis years. Yet his home-run rate tanked. 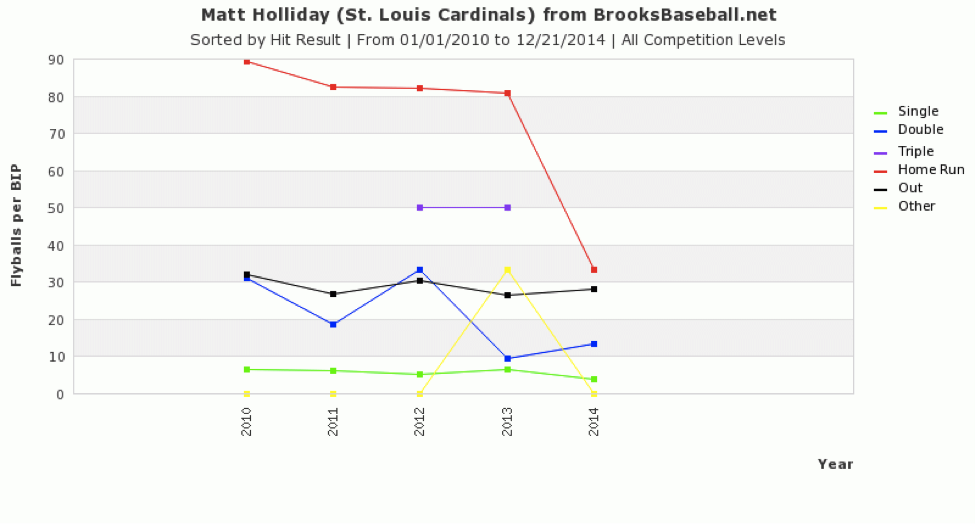 He still managed to hit 20 balls out of the yard, but that result was more or less the product of a jump in his overall fly-ball rate. Without access to batted ball velocity we can’t confirm this, but given the sequencing change and difficulty with breakers it’s probably fair to speculate that while some of the drop in HR:FB ratio was likely luck-related, some of it was also the product of Holliday making weaker contact and generating higher-trajectory balls with less carry.

That thesis is also supported by the nosedive of his BABIP. Holliday’s line drive rate collapsed to 16.6 percent last summer, about two and a half points off his career rate of 19.2 percent. Line-drive rate is highly volatile year-to-year, so some of that is likely random fluctuation. But again, as it fits in with the other pieces of the puzzle, we can probably point back towards some weaker contact as a root cause of the drop.

So on one hand, here we have an aging slugger against whom opposing pitchers are making a concerted effort to pound with fastballs inside, and the change in approach has resulted in that slugger making weaker contact. That’s not generally a surface profile that screams out for draft day investment.

Still, the good news here is that Holliday’s stellar approach mitigates the likelihood of a complete collapse. His offensive game is one that tends to age quite gracefully, and even with the creeping signs of a slowing bat and diminishing skill he remained a highly productive fantasy asset, particularly in OBP leagues. His contact rates belie a hitter who is still quite skilled at getting bat to ball, and his fly-ball distances point to a guy who’s still plenty strong enough to overcome a marginal loss of bat speed and retain an average to above-average power profile.

So while Holliday does appear to be slowing down some, he still should be viewed by managers as a guy able and likely to produce strong across-the-board fantasy numbers even at his relatively advanced age. There’s no indication St. Louis is planning on moving him out of the three hole, and the addition of Jason Heyward (.351 career OBP) to presumably join Matt Carpenter (.379) ahead of him in the lineup should provide him with a whole bunch of opportunities to hit with runners on base next summer. In medium-depth mixed OBP and NL-only leagues, he still deserves to be viewed as a stable (if lower end) OF1 option, while managers in standard mixed formats shouldn’t hesitate to target him for solid OF2 production.