Last week, we discussed the difficulty of evaluating unexpected early-season studs. Their cumulative statistics can often camouflage a subsequent downturn in performance because of a strong month of April, leaving fantasy owners hanging on to overperformers longer than they should. It simply takes too long for the overall numbers to become unpalatable when they’re bolstered by an extremely strong stretch early in the year. Thus, it is important to isolate recent performance and determine whether Cinderella has legitimate staying power as early as possible. Fantasy owners can’t afford to pick up guys like Emilio Bonifacio during his hot stretch and stick with him for the next couple months while he drags his feet behind the remainder of one’s roster.

We previously focused on hitters who enjoyed surprising starts to the 2014 season, isolating their performance since the beginning of May to determine if their recent performance has remained acceptable after such a strong April. Guys like Michael Morse and Dee Gordon stood on one side of the room, while Dayan Viciedo and Trevor Plouffe quietly sulked in the corner on the opposite side.

Today, we move to the pitcher’s mound and look at a handful of hurlers who unexpectedly dominated in April. Have they sustained their performance? Should you continue to carry them on your fantasy roster?

Fantasy owners generally shouldn’t expect major fantasy production from 33-year-old veterans who spent the previous two seasons solely as a middle reliever. Simon has proven to be an exception. He twirled nothing but gems in April, largely supported by a stellar BABIP. As the BABIP has risen, however, the right-hander has continued to remain useful in fantasy leagues. His ERA and WHIP have been above average since May 1, and his walk rate has almost been cut in half. The strikeouts are still not there. As someone who wasn’t on anyone’s fantasy radar in March and was freely available on the waiver wire, he’s still relevant in all leagues.

Simon has seen his velocity increase in the past couple months. His repertoire is limited against left-handed batters—as seen by his 1.75 K/BB and 1.51 HR/9 against lefties—but he’s been able to avoid major damage by limiting overall baserunners. One understands why Simon profiles best as a reliever. For now, though, he’s making it work as a starter. He’s limiting walks, getting ground balls, and primarily pounding hitters with a mid-90s fastball and low-90s cutter.

Chavez is another 30-something reliever who has suddenly found himself as a legitimate big-league starter. Unlike Alfredo Simon, though, Chavez has some bigger question marks heading into the remainder of the season. His strikeout rate has plummeted since his banner April, and his WHIP is below average. He’s getting hit and walking more, too, which has resulted in a myriad of baserunners.

Like Simon, it’s easy to understand why he’s been a reliever. He’s really struggled against lefties over the past couple months, and they have an overall .269/.333/.365 slash line while righties are hitting under .200. We can also see this disparity in his 2.21 K:BB ratio against lefties and 6.67 K:BB against righties. It’s a stark difference.

Chavez could remain effective enough for fantasy purposes because he pitches in a friendly environment and is backed by a high-scoring lineup, but his profile is severely waning. Pitchers who don’t strikeout a ton aren’t overly attractive if the WHIP isn’t above average. Right now, Chavez’s effectiveness hinges on his ERA remaining low, while the remainder of his profile is unattractive to fantasy owners. That’s not something in which someone should heavily invest.

It’s a running theme throughout the piece, but Eovaldi has experienced a downturn in performance because he is once again struggling against left-handed batters. He suffocated lefties in April and cruised with tremendous numbers. The tide turned once the calendar flipped to May, and lefties are now hitting .304/.346/.487 on the season. Eovaldi relies on a fastball/slider combination. Lefties are hitting .306 against the fastball and .391 against the slider. The only effective pitch for the right-hander against lefties has been his curveball.

I don’t like to focus too much on BABIP, but one discouraging sign for Eovaldi is that his WHIP and opponent batting average has skyrocketed in May and June without a massive BABIP. That indicates the overall effectiveness has dropped. It’s not just random variance that can be expected to correct itself throughout the remainder of the season. Until Eovaldi can consistently handle left-handed pitching, he’s not a viable starter in shallow leagues. At best, owners should limit him to righty-heavy lineups.

It’s not that Jason Hammel hasn’t been good before. He compiled a 3.43 ERA (3.29 FIP) for the Baltimore Orioles in 2012, but he largely imploded last year and became an afterthought when he inked a one-year deal with the Cubs. Early reports surfaced in spring training, however, that mentioned Cubs’ pitching coach Chris Bosio had fixed Hammel’s slider. At the time, I dismissed it as spring training fluff; however, it’s become a weapon in his arsenal. In fact, the right-hander has largely abandoned his curve and changeup in favor of his slider. He’s now a pure fastball/slider pitcher.

That two-pitch repertoire would presumably lead to platoon issues, but that hasn’t been the case. He’s still posting a whiff rate over 10 percent against lefties and they’re only hitting .125 with a .104 ISO against his slider, which is the main reason he’s been able to avoid the same lofty splits that have plagued Chavez and Eovaldi.

Instead, the strikeout rate has increased, and even with a BABIP north of .300, Hammel has proven that he can sustain an above-average strikeout rate and a solid WHIP. That’s exactly the kind of follow-up performance a fantasy owner wants from a Cinderella starter. One that hints at overall, sustainable effectiveness, rather than a simple .138 BABIP—which is what he had in April.

Almost everything has come up snake eyes for Lyles in the past couple months. The strikeout rate has increased, as his slider and changeup have missed more bats, but the rest has imploded. The walk rate almost doubled. The BABIP returned to .300-plus, which is more in line with his career .304 BABIP. His WHIP accelerated dramatically, and his ERA followed. Add in the fact that he primarily pitches in the launching pad that is Coors Field, and we’re not talking about anyone who should sniff a roster, except in the deepest of leagues.

For Harang, the lack of strikeouts has really been a phenomenon in the month of June, but the overall profile can be seen in the platoon split that’s only grown since the first month of the season. 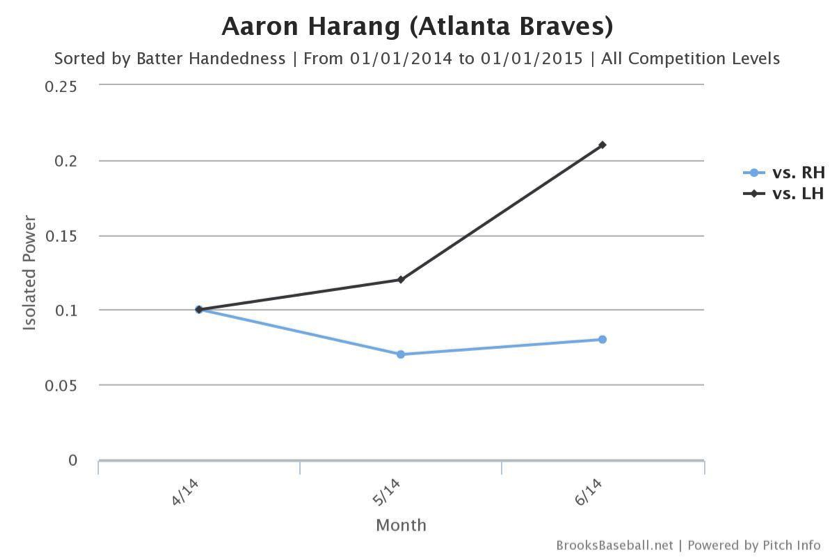 Lefties are mashing, and while it seems to be what we’ve turned to for every starter in this article, it’s a common issue that affects fringe big-league starters. They wouldn’t be considered Cinderellas if they could unquestionably retire both lefties and righties with ease. Harang is getting his teeth kicked in by lefties and if he wants to remain in the Braves’ rotation for the remainder of the year, he must button up his performance against opposite-handed pitching.

Kennedy holds an interesting place on this list because he’s been good in the past and really struggled in 2012 and 2013 before sprinting out of the gates in 2014. He saw his strikeout rate increase and his ERA return to the low-3.00s. However, the run prevention hasn’t remained consistent.

WIth that said, there’s a lot to like about what Kennedy is doing in May and June. The strikeout rate has improved, and the velocity has remained steady. There’s no platoon split, and if anything, there’s a reverse platoon split. In my opinion, much of the raised WHIP and raised ERA comes from the tortuous BABIP in May and June. It jumped over 100 points. One would expect that number to come down from .358 in the second half to closer to his career average of the high-.280s.

I like what Ian Kennedy has to offer from here on out. He’s missing bats, the velocity is consistent, he’s getting more grounders than in previous years, he plays in a great ballpark for pitchers, and his walk rate is receding to his pre-2013 marks. It’s not someone I’d expect to carry a pitching staff in shallower fantasy leagues, but he’s a viable option in deeper leagues and even carries some upside.

You need to be logged in to comment. Login or Subscribe
stevegoz
I hope to see Tanner Roark covered in a future edition.
Reply to stevegoz
sam19041
Agreed. Me too!
Reply to sam19041