As the playoffs are coming to an end in a fashion that seems to get crazier and crazier by the game, we continue to use this opportunity to look back on the 2013 season to see what we can learn going forward. Two of the biggest areas to explore for uncovering undervalued assets are hidden improvements over the course of the previous season and digging beyond the raw stats to the more predictive ones. In this exercise, we’re going to combine the two to see if anything interesting is uncovered when using FIP to determine more of a true performance level after the dust cleared from the All-Star festivities in New York.

There were 12 pitchers who posted a FIP of 2.75 or lower in the second half of the 2013 season. Here they are in reverse order:

Hyun-Jin Ryu, Los Angeles Dodgers (2.73 FIP, 2.87 ERA)
Conventional wisdom that says when a pitcher who is imported from overseas doesn’t have overpowering stuff, the league will catch up to him the second and third time around. And I was guilty of believing this specifically about Ryu. However, after posting a good first half, he turned it up to excellent from mid-July on. Not only did his strikeout rate tick up after the All-Star Game, but also his walk rate dropped from 8.1 percent to 3.3 percent. In fact, in 10 starts between August and September, he nearly had as many wins (five) as walks (seven).

Madison Bumgarner, San Francisco Giants (2.72 FIP, 2.36 ERA)
As with any list like this, there are going to be a fair number of names where your first reaction is going to be “duh”. Bumgarner is one of those guys, although it’s not difficult to be concerned about a second straight season in which he threw his slider more than 37 percent of the time. Over the last two seasons, Bumgarner has thrown the most sliders in baseball—280 more than the next man on the list, Ervin Santana. Many pitchers would be unable to maintain that slider rate without breaking, but maybe Bumgarner just isn’t one of those guys.

David Price, Tampa Bay Rays (2.72 FIP, 2.87 ERA)
There were plenty of owners who bought low on David Price before he returned from the disabled list on July 2 (when he had a 5.24 ERA). All he did from that point on was go 9-4 with a 2.53 ERA, 0.96 WHIP, and 102 strikeouts against just 13 walks in 131 2/3 innings. Despite the elite level performance, concerns linger—mostly stemming from the combination of a drop in strikeout rate with a two mile per hour drop in fastball velocity. A trade candidate this off-season, Price could also see his value swing a bit based on where he ends up.

Gerrit Cole, Pittsburgh Pirates (2.72 FIP, 2.85 ERA)
On one hand, it’s a shame that Cole got that additional exposure during the post-season, as it decreases the chance of getting him at a reasonable price in 2014 drafts. However, if he’s anything like his second half performance, it’s tough to foresee a price that would result in a loss. As he got more comfortable in the majors, his strikeout rate shot up—moving from 15.4 percent in the first half to 25.0 percent in the second. In keeper leagues, Cole should be valued right around where 2013 NL Rookie of the Year candidate Jose Fernandez is.

Tyson Ross, San Diego Padres (2.66 FIP, 2.93 ERA)
Ross would have been a surprising name for this list in Spring Training, but if you watched him down the stretch, this should not come as much of a shock. A fastball velocity jump from 93.6 to 94.9 MPH surely helped the results along, but his slider proved to be a monster. His 50.4 percent whiff rate on the pitch was good for second best in the major leagues this year, behind Patrick Corbin. There will always be concerns with Ross staying healthy due to an unorthodox delivery, which despite being a little cleaner in 2013 is still far from ideal, but his step forward in 2013 has at least quieted the crowd who wanted to peg him as a bullpen arm for performance reasons.

Cole Hamels, Philadelphia Phillies (2.65 FIP, 2.97 ERA)
Cliff Lee, Philadephia Phillies (2.60 FIP, 2.89 ERA)
Despite the struggles of Hamels, these teammates should not surprise anyone with their placements on the list. Lee led the National League for the second straight season in strikeout-to-walk rate, while Hamels posted the second best FIP of his career in 2013 despite being a disappointment for fantasy. I’d take Lee ahead of Hamels for 2014, but I also would not let either of them fall out of the top-15.

Anibal Sanchez, Detroit Tigers (2.50 FIP, 2.20 ERA)
As was on display in his six-inning no-hit performance against Boston in the ALCS (along with everything else except his control), Sanchez has seen a tick up in performance due to a heavier reliance on his changeup. Before 2013, Sanchez had never thrown the pitch more than 20 percent of the time, and it jumped to 24.2 percent in 2013. Of course, that doesn’t matter if the pitch isn’t successful, but the chart below shows pretty well how Sanchez has become more effective with it over the course of his career: 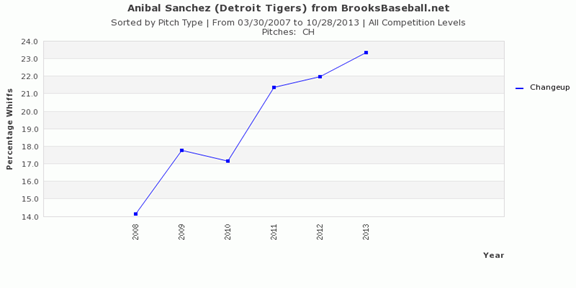 Scott Kazmir, Cleveland Indians (2.42 FIP, 3.38 ERA)
Yes, that Scott Kazmir. It’s pinch-worthy any time you look at it, but Kazmir’s average fastball velocity was not only back, but was higher in 2013 than in 2007, when he struck out a career-high 239 batters for Tampa Bay. This is the same guy who not long ago was playing for an independent league team in Sugarland, TX, where he was outpitched by rotation mate Jason Lane (the former Astros outfielder). It’s anyone’s guess as to how long Kazmir's body will hold up at this point, but after 82 strikeouts against just 17 walks in 72 second-half innings, the kid appears to be back from a performance standpoint. Should he be drafted in the top 50 pitchers in 2014? At this point, the answer amazingly looks like yes.

A.J. Burnett, Pittsburgh Pirates (2.32 FIP, 3.56 ERA)
Sure, he got obliterated in his playoff start against St Louis and then was passed over in favor of rookie Gerrit Cole in the deciding game of the NLCS, but that shouldn’t cloud how great a season Burnett had in 2013. At age 36, he had the highest strikeout rate (26.1 percent) of his long career, while maintaining his elite ground ball rate (56.5 percent). Burnett seems to have found the fountain of youth in Pittsburgh, although he is a free agent this winter and could easily end up in a much less attractive situation. A return to PNC Park, whether by qualifying offer or not, should make him a top-25 starter for 2014.

Ubaldo Jimenez, Cleveland Indians (2.17 FIP, 1.82 ERA)
Left for dead in the fantasy community, Jimenez returned to vintage form after the calendar flipped to June in 2013. However, even that was a just a precursor to his final nine starts of the season, in which his domination brought back visions of the first half of 2010. He relied heavily on his slider, which he threw at the highest rates of his career and which was his most valuable pitch—worth seven runs above average for the season. Investing heavily in the soon-to-be 30-year old is going to take a leap of faith based on how bad he was for an extended period of time, but it will be tempting. However, it’s worth noting that those final nine starts came against a pretty weak stretch of opponents: Minnesota twice, Chicago (AL) twice, Houston, Kansas City, and road starts against Atlanta and Oakland.

You need to be logged in to comment. Login or Subscribe
rawagman
The "chart below" Sanchez is missing.
Reply to rawagman
swarmee
So are four of the "12 pitchers" mentioned.
Reply to swarmee
bornyank1
Fixed.
Reply to bornyank1
JasonPennini
Jose Fernandez had a 1.99 2nd half FIP on fan graphs.
Reply to JasonPennini
bretsayre
But he didn't log enough innings to qualify. If you lower the threshhold to 50 innings pitched, you get three new names in the under 2.75 group: Jose Fernandez, Felix Hernandez and Tanner Roark. One of those things is not like the other..
Reply to bretsayre
bhalpern
Curtidor LaRocadez?
Reply to bhalpern
JasonPennini
That makes sense. Can't wait to see what next year holds for him.
Reply to JasonPennini
cbbblink
Surprised to not see Cashner on this list.
Reply to cbbblink