One of the most intimidating aspects of Rotisserie-style fantasy baseball is player valuation. For beginners, figuring out what a player is worth seems daunting. Many fantasy players view player valuation the way most drivers view their cars: They don’t need to know how an engine works to know how to drive. Many Roto players simply take a list of published values and go into their auctions with these values. They don’t care what makes them work or how they work; they’re just happy enough to know that they do work.

However, some readers have asked me to describe how dollar valuations are derived for individual players. Below is a cursory look at Rotisserie dollar valuation theory, how I derive dollar values, and some (hopefully) useful tips on how to use valuation in season.

When the founding fathers derived the $260/23 player, eight-category scheme, with four categories in offense and four categories in pitching, you would assume that fantasy owners would spend $130 on hitting and $130 on pitching. From the onset, though, this was not the case. In the game’s infancy, owners started out spending about 60 percent of their budget on hitting and 40 percent on pitching, amounting to a $156/$104 split. Over the years, fantasy owners started spending more and more on hitting, pushing the split to approximately 70/30 (or $182/$78 split) between hitting and pitching.

Most valuation systems allocate player value based on how fantasy owners distribute their money, not on the reality that 50 percent of a league’s points come from hitting and 50 percent come from pitching. In reality, dollar valuation systems are not measuring how much value each player produced but the return on investment (ROI) based on what a typical league spends on the 168 hitters and 108 pitchers available in a 12-team Rotisserie league.

This leads to an inevitable question: Why do hitters get paid so much more money than pitchers?

The simple answer is predictability. It is very unlikely that an elite hitter will come from the ranks of a $1 auction purchase or a free agent acquisition. On the pitching side, this is not uncommon at all. In 2012, Michael Saunders was the best AL hitter not purchased in the CBS, LABR, and Tout Wars expert leagues. He was the 49th-best AL hitter. Fernando Rodney—his pitching counterpart—was the fourth-best AL pitcher.

Some of this is the nature of the categories that we use. Most of what hitters do is money in the bank. Once we get a home run, RBI, or stolen base, it belongs to us forever. Pitchers have two categories—ERA and WHIP—where they can provide enough bad outcomes to undo any good that they or another member of our staff might do. An 0-for-4 pushes us back in one category, and just a little bit at that. A three-inning, 10-base-runner, seven-earned-run outing is a disaster that could take at least two good starts to recover from. While each category holds the same amount of weight in the standings, the quantitative categories are weighted more heavily from a valuation standpoint.

The rationale aside, the result is what matters in terms of valuation theory. If your league spent 70 percent of its total budget on hitting and 30% on pitching, the hitters are paid $2,184 and they earn $2.184. The pitchers are paid $936 and they earn $936. Return on investment is what dollar valuation systems are attempting to measure.

In early schools of thought, each quantitative category was treated equally and worth the same amount across the board. This was known as the scarcity model of valuation. If there was less of something to purchase, it figured to reason that you should pay more for that commodity.

In theory, this makes perfect sense. In practice, this would lead to a somewhat skewed valuation proposition, particularly back in the days when 4×4 Rotisserie was the only game in town. Below is an example.

Crisp was a starter entering 2012 and everyone assumed he would steal a significant amount of bases. So maybe he did earn $32 in 4×4 or $27 in 5×5. In reality, though, the earnings are skewed to devalue stolen bases somewhat. There are fewer steals than home runs and far fewer steals than runs or RBI, but they are valued far less than those categories.

Why is this? There are two answers to this question.

The first answer—once again—is marketplace dynamics. Davis had an average salary of five dollars in 2012. Dyson was a free agent – not one of the expert leagues that I use to calculate average salary even bothered to spend a dollar on him in their auctions. While there are free agents and cheap bargains that do deliver in the non-SB categories, it is far more atypical for a game changer in a non-SB category to appear in the free agent pool in a deep league.

Scarcity has an even-more-dramatic impact on closers.

Since most saves are concentrated among a select handful of pitchers every year, the scarcity effect on closers is even greater than it is on stolen bases. Even a bad closer like Aceves got paid because of his 25 saves. For a terrific closer like Rodney, he gets $73— or nearly 86 percent of an $85 pitching budget.

This is where the scarcity model goes down the drain. You could have spent $34 on Rajai Davis in a 4×4 or $29 in a 5×5 and still won your league. However, if you spent $73 or $61 on Rodney, you would not have won. Even if you somehow managed to luck into mediocre qualitative stats, you would have bottomed out in strikeouts and had trouble winning wins.

If not scarcity, then what?

The valuation model that many use is known as a Standings Gain Point model, or SGP for short. Baseball Prospectus has this model in its Player Forecast Manager, as displayed below. 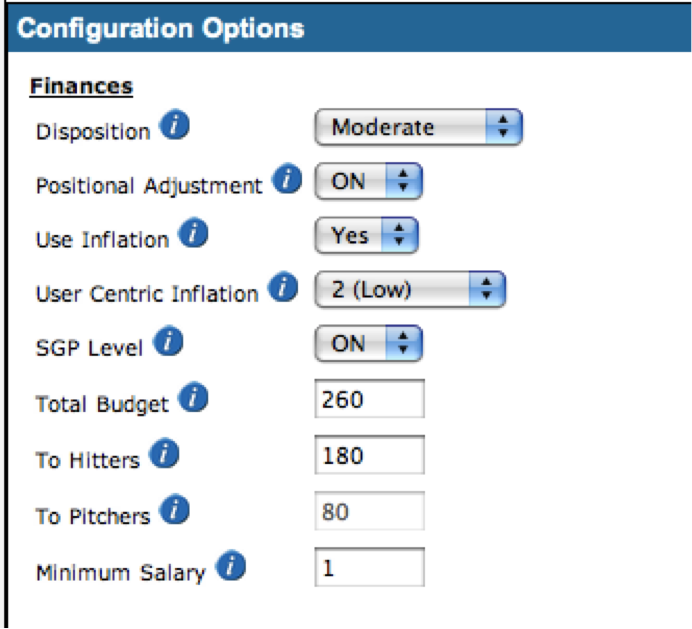 The short definition for SGP is contained in the PFM:

There is another element to this type of valuation as well that lends credence to the idea of using a SGP model instead of a scarcity model. Here is what the Tout Wars NL-only standings look like this morning in stolen bases 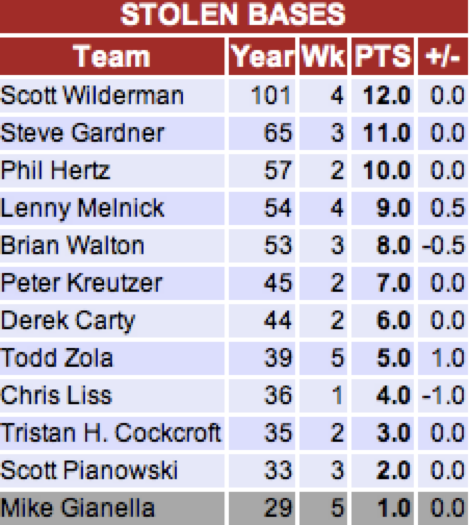 Scott Wilderman lost Everth Cabrera to the DL a couple of weeks ago but it hasn’t made much of a difference; his team keeps on running and running. Starling Marte and Ben Revere will do that. Take 35 steals off of Wilderman’s team and he would still have 12 points. In other words, all of Cabrera’s steals plus four of Marte’s steals are worthless to Wilderman.

These category gaps certainly aren’t impossible in other categories, but the nature of these categories makes it more unlikely for the reasons I mentioned above. Edward Mujica is more likely to come out of nowhere and save 30 games than a free agent pitcher is to come out of nowhere and win 20. These unexpected performances increase the gaps in categories and are far more likely to create scenarios like the one outlined above. In a sense, the scarcity model is now turned on its head. Steals and saves are worth less now, not more.

How Do I Value Players?

I start by talking the 168 hitters and the 108 pitchers with the highest average salaries in the CBS, LABR, and Tout Wars expert auctions (the secondary sort is alphabetical by first name) and calculating their combined statistics. I don’t use the statistics of the entire Major League pool because $3,120 represents what Rotisserie teams spend at auction ($260 per team x 12 teams = $3,120). This $3,120 is meaningless in any other context; to apply valuation for players not purchased in the auction pool does not provide a guideline of what you should spend at auction, which is truly the point of this exercise.

You’ll notice that batting average, earned run average, and WHIP are missing. These categories are treated as having $0 value across the board. Hitters above the league average in batting average get a positive value while hitters below average get a negative value. The same principle applies for pitchers in ERA/WHIP. This isn’t a universal application of this theory. Some believe that a league’s worst team’s BA/ERA/WHIP should be used as a baseline and any hitter/pitcher who does better than that hypothetical team should be assigned value. I am fine with assigning value this way, but this is not the way I do it.

In a scarcity model, Everth Cabrera would easily be worth more than $17 in 2012. However, it’s not only the idea that his steals start becoming “worthless” for a team with excess, but also the idea that he’s virtually worthless in every other category. Having a one-category guy in one slot on your roster is fine, but you will have to make that production up elsewhere. Contrast that with Braun, who earns at least $8 in every category across the board.

The most important thing to keep in mind about player valuation is that these are broad guidelines about what players are worth. This isn’t intended as gospel truth, nor should it be. If you need a starting pitcher and have an excess in power, flipping Chris Davis for Max Scherzer might be a perfectly sensible thing to do, even if Davis has earned more year-to-date. Likewise, the same flexibility must be applied in your auctions or drafts as well. If you need a closer and every other decent closer besides Joe Nathan was frozen, spending a few extra bucks on Nathan might make sense, no matter what the valuations say.

However, it is good to have at least a basic understanding of what players typically contribute to your team. Finding a player who is undervalued or overvalued by the market is just as important a tool as scouting or knowing how to use advanced analytics to help your team win. One of the reasons I liked Carlos Gomez as much as I did headed into 2013 is because I identified a market inefficiency in how he was valued versus what he had produced in 2012. Because Gomez’s statistical contributions were improperly valued, I correctly figured he would be a bargain in 2013; the fact that he has outproduced his anticipated stats was just gravy. Being valuation-savvy gives you yet another avenue to outperform your competitors, and is an advantage well worth having.

Also, it would be great if you can add on this article with a follow up one on how to set up a spreadsheet (i.e., if we're using different stats like 2b, hlds, etc. and/or our own projections).
Reply to fantasytool12
MikeGianella
Here is an example. It is for prior seasons, but it gives you a pretty solid idea of how this is devised.

That's a good idea for a follow up. I'll tackle that in a future piece.
Reply to MikeGianella
lambchop1
How do you set a value for AVG, WHIP, ERA, etc. for a player if those categories are treated as $0 in your initial valuation?
Reply to lambchop1
MikeGianella
See my response to fantasytool12 above.
Reply to MikeGianella
tballgame
Is there a BP page that shows current 2013 player values similar to your 2012 tabulation?
Reply to tballgame
MikeGianella
Set the disposition to moderate, turn the positional adjustment off, and turn the SGP Level ON. It's not exact, but it's very similar.