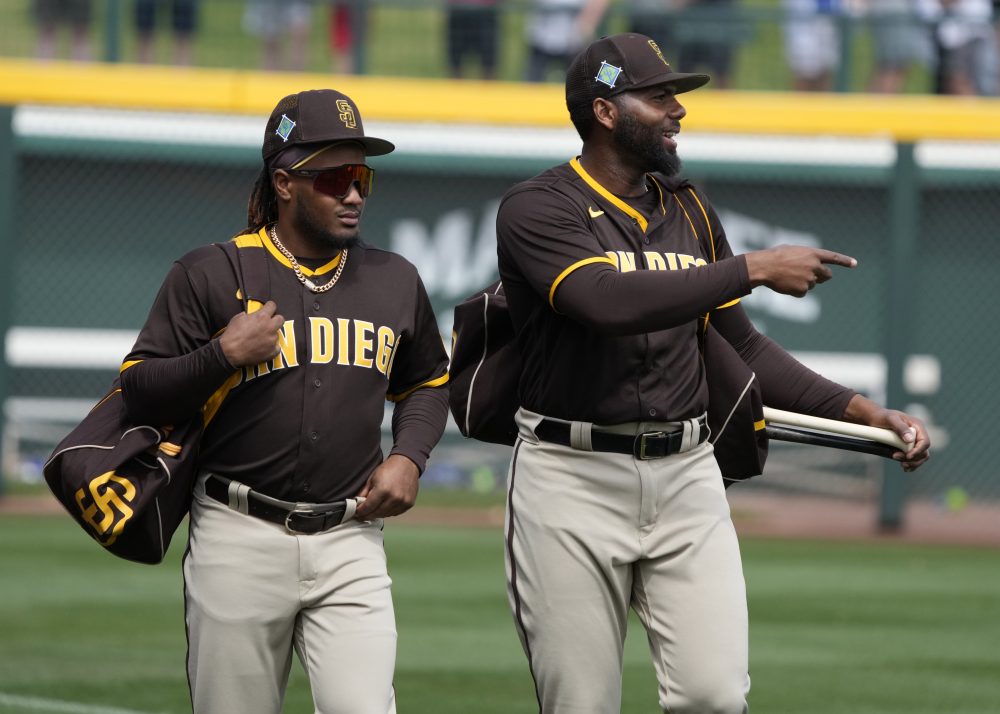 Welcome to The Heat Check, a report running every other week encompassing players across the minor leagues who are lighting their league on fire or who have been doused in cold water. The stats encompass the players last 10 games.

Eguy Rosario, 2B, San Diego Padres (Triple-A El Paso): .378 (14-37), 12 R, 3 2B, 3 HR, 7 RBI, 6 BB, 6 K, SB.
A focus early in the year for Rosario was to cut the chase rate down and become more disciplined in his approach. The hope was he could better utilize his short, compact stroke and make hard contact to all fields. He reportedly worked hard with El Paso hitting coach, Jonny Mathews, and it has resulted in career-best power numbers. With San Diego fighting for a playoff spot Brandon Drury, Jake Cronenworth, and Ha-Seong Kim are going to get the big league middle infield at-bats—but should the need arise Rosario and his hot bat are waiting in the wings.

Cade Cavalli, RHP, Washington Nationals (Triple-A Rochester): 12 IP, 9 H, 3 ER, 5 BB, 15 K.
The fastball was a little too easy to barrel up in the first half of the season, but Cavalli has quietly got back to form and is ending the year putting up solid numbers in the International League. He’s moved away from the slider, relying more on a power curve as his primary breaking pitch. He’s trending in the right direction and should get a crack at earning a rotation spot out of spring training next season.

Elly De La Cruz, SS, Cincinnati Reds (Double-A Chattanooga): .359 (14-39), 8 R, 8 2B, 3 HR, 14 RBI, 2 BB, 15 K, 3 SB.
De La Cruz struck out over 36% percent of the time over the last ten days but still managed to post a .359/.390/.795 slashline. He’s the most electric prospect in the game right now and Jarrett Seidler did a great job in his piece last week describing how no other prospect compares. He’s making it work somehow, putting up fantastic offensive numbers while consistently posting strikeout rates north of 30% percent.

Miguel Amaya, C, Chicago Cubs (Double-A Tennessee): .050 (1-20), 2 R, RBI, 2 BB, 6 K.
It’s been an understandably slow start offensively for Amaya, as he’s returning to action after undergoing Tommy John surgery last fall. The injury to his elbow and the pandemic season have limited the top Cubs catching prospect to just 23 games since 2019. He’s currently not seeing any time behind the plate, serving strictly as a designated hitter for the time being. Chicago will continue to get him at-bats the last month of the season, and likely in the Arizona Fall League, in hopes of a return to form and possibly a 2023 major league debut.

Andrew Painter, RHP, Philadelphia Phillies (High-A Jersey Shore): 14 IP, 6 H, 0 ER, 2 BB, 20 K.
No pitcher has seen their stock rise more this season than Painter. He’s dominated over two levels and is currently in the midst of a 20-inning scoreless streak. The extreme extension generated by his tall frame and velocity that flirts with triple-digits makes the fastball a double-plus offering. It’s paired with a vicious sweeping slider that has hitters flailing as it darts out of the zone. Philadelphia has an excellent stable of young pitchers, and Painter is the best of the bunch.

Joshua Mears, OF, San Diego Padres (High-A Fort Wayne): .364 (12-33), 6 R, 4 2B, 3 HR, 6 RBI, 2 BB, 14 K.
Mears has returned to Fort Wayne after nearly two months split working between the Development List and the ACL to get the bat back on track. He’s struggled mightily with pitch recognition this year, getting thrown off balance by the most modest of secondaries and seeing the strikeout rate spike to over 40%. His raw power is among the tops in all of baseball but it’s currently being held back by his lack of consistent contact. His two-week hot streak is a good sign, but the bat will need to continue to develop if he’s to eventually become a middle-of-the-order masher.

Edgar Quero, C, Los Angeles Angels (Low-A Inland Empire): .324 (11-34), 7 R, 7 2B, 3 HR, 9 RBI, 6 BB, 9 K.
Quero has been the breakout prospect in the organization this summer, putting up an impressive .318/.428/.530 slashline in his first full professional season. He’s cut the strikeout rate down dramatically from last year and his improved swing mechanics have led to more consistent hard contact. A switch hitter who can impact the ball from both sides, he’s currently more adept from the left hand side, where there’s some emerging pull power. Like most young catchers he’s raw defensively but the tools are in place to stick behind the plate long-term.

Yanquiel Fernandez, OF, Colorado Rockies (Low-A Fresno): .341 (14-41), 10 R, 4 2B, 4 HR, 17 RBI, 4 BB, 5 K.
The combination of power and contact ability that Fernandez is showing as a teenager in the Cal League is quietly making him one of the top young players in the Rockies organization. His left-handed swing produces plenty of loud contact, and he’s shown an impressive amount of plate discipline in his first full-season assignment. That offensive prowess plus his strong throwing arm give him a classic power hitting right fielder profile.

Rayne Doncon, SS, Los Angeles Dodgers (Rookie ACL Dodgers): .361 (13-36), 7 R, 3 2B, 3 HR, 12 RBI, BB, 7 K, SB.
There was an adjustment period for Doncon early in his initial stateside season as he adapted to seeing more advanced breaking stuff. He’s found his comfort level now and has been locked in at the plate, slashing .381/.422/.762 during the month of August. Pitchers have a difficult time getting a fastball by his extremely fast bat, and he’s learning how to work the count and attack in the right situations. The potential hit and power combination plus the ability to stick up the middle gives Doncon some of the highest upside in the ACL.

Lazaro Montes, OF, Seattle Mariners (Rookie DSL Mariners): .357 (10-28), 7 R, 3 2B, 3 HR, 11 RBI, 9 BB, 8 K, SB.
Seventeen-year-old Montes has been dominating the DSL, especially of late, posting a 1.284 OPS in the month of August. His strong, athletic frame generates plenty of raw pop, and should continue to grow as he matures. He shows a solid knowledge of the strike zone, drawing his fair share of walks. There’s currently some swing and miss but it should improve as he gains continued reps against quality breaking stuff. He’s still light years away from being major league ready, but Montes has plenty of upside for the Mariners to dream on.